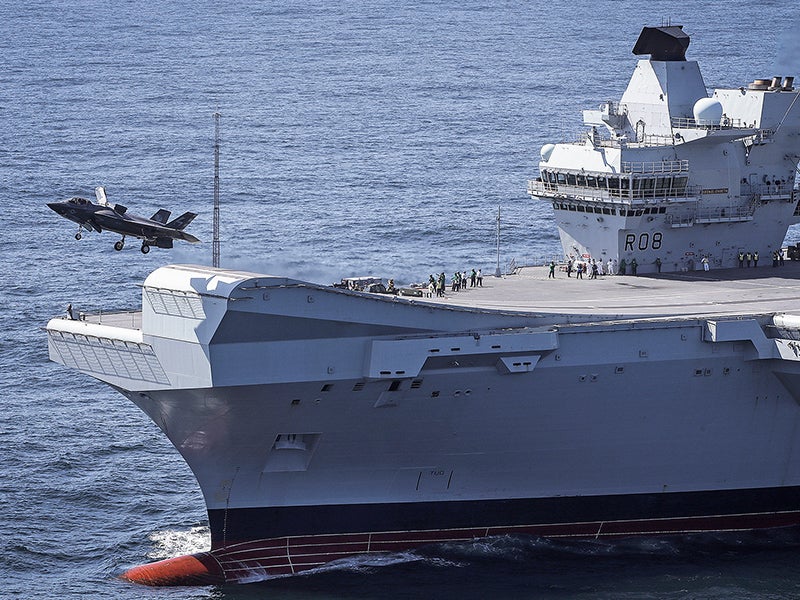 What a crazy week it has been for the F-35 program and the F-35B in particular. In the space of just a few days, the type racked up its first U.S. combat mission, its first operations aboard the Royal Navy's new aircraft carrier HMS Queen Elizabeth, and its first total loss crash and pilot ejection. It was definitely a mixed bag, but as I noted to readers on Friday, the F-35 program can only be incredibly proud of its safety record. Sure there have been plenty of close calls, but going through nearly 12 years of tortured developmental and operational flying (18 if you count the Joint Strike Fighter X-plane fly-off, but you really shouldn't) without an in-flight crash like the one of Friday really is quite amazing.

F-35s hitting the Queen Elizabeth's deck for the first time is a huge milestone for the Royal Navy and the UK Ministry of Defense as a whole. After entirely forfeiting its fixed-wing aircraft carrier capacity eight years ago with the retirement of the Harrier and the aging Invincible class carriers that took them to sea, getting that capability back, and in an expanded form, is quite exciting. In fact, I have never seen UK defense enthusiasts this amped up—almost to a comical degree, to be honest—about anything in the past. But when you consider they saw a staple Royal Navy capability suddenly strangled to its death nearly a decade ago, Friday's milestone couldn't have come soon enough.

Apparently, there has been some controversy about how this big event was handled by the Royal Navy's public affairs team. Regardless, some great images have come out of the F-35B's inaugural operations from Queen Elizabeth's deck as the ship sails off the east coast of the United States and I have some observations I would like to share and questions I would like to ask about a few of them.

This is a great shot of the ship underway while an F-35B makes its approach. In the future, the aircraft will execute rolling landings on her deck, which you can read all about in this past piece of mine. I do wonder what that big tower is for? We know the F-35B is very sensitive to lightning (ironic I know) and the USMC has to set up special lightning towers around their aircraft when parked in the open in storm-prone locales, but I have never seen something like this on an American amphibious assault ship before. Maybe there is another reason for the tower. Let us know in the comments below if you have an answer.

This image shows the stadium-like observation area inside the control tower area on HMS Queen Elizabeth. It's a very cool setup, but I do wonder as to exactly what standards the ship was designed and built? Those huge panes of glass are great for visibility, but can they sustain any significant battle or accident damage? Compared to what we see on any other carrier around the globe, this almost looks like a commercial setup. Maybe some sort of new glass technology was used, but still, it seems a bit sketchy for a warship, especially for one with minimal defenses.

The ship's flight operations area looks huge in this shot. That is a ton of space for a STOVL fighter, more than on any ship before—that is aside from when USMC AV8 Harriers operated from U.S. Navy supercarriers on a couple occasions in the past. It will be interesting to see what tempo of flight operations they can squeeze out of these big ships in comparison to U.S. Navy LHDs and LHAs. It's also a reminder of how these ships could have been CATOBAR equipped and how licensed-built new ones could potentially be in the future if the U.S. Navy ever actually moves to procure a smaller, conventionally powered carrier design. As it sits now, these ships cost a

fraction of the price of Ford class supercarrier.

If anyone says the F-35B isn't fascinating to watch land vertically, they are crazy.

Here's a great shot showing the F-35B and the navigational and flight control islands and their various sensors and communications systems, with the Artisan 3D radar above the rear island and the S1850M Long-Range Radar mounted atop the bridge. Note the electro-optical/infrared sensor system above the corner of the bridge as well. This likely operates in a similar role as the Mk20 system found installed atop American destroyer and cruiser bridges.

In this picture, you can see one of the ship's three 'big board' digital flight information displays. They give deck crew up to the minute information on aircraft status, a feature not found on American carriers. A stoplights system is also used to inform deck crews the status of the deck during air operations.

I'm not totally clear on the Royal Navy's shirt colors for deck crew. There may be some slight deviation from the U.S. Navy's color organization which you can read all about in this past piece of mine.

A nice detail view of the F-35B's nose here. Note all the electro-optical gear on the jet's pointy end. You are seeing the EOTS below the nose, a DAS aperture above the nose, a flight camera system in the dash that is used for debriefing, and the pilot's notoriously complex helmet mounted display has its own electro-optical/night vision sensors as well.

This is a great shot, obviously, it shows a very happy test pilot, but it also highlights the reality of stealth airframes. Here you can see how some of the aircraft seams around the cockpit area and the canopy have been masked with radar absorbent tape and gap fillers. The process is maintenance intensive, although Lockheed claims they have made major inroads over the F-22's design when it comes to making maintaining the F-35's skin a less arduous affair, with most of the low-observable coatings being 'baked in' to the aircraft's skin itself. You can also see evidence of the F-35's canopy delamination issue. It looks like some fairly crude repairs have been done to keep canopy in service. It's also worth noting that these are test jets, not ones that would be used in combat, so in some cases, their radar absorbent coatings may have been allowed to erode further than those found on their front-line counterparts.

This is another nice detail shot with the canopy open. Once again, notice the crude tape around the canopy's frame. Also, note the patinaed panel in front of the refueling probe door.

This head-on shot gives a good view of the jet's unique lines.

Now for some ski-jump shots! It's awesome to see an actual ship's ramp in use after years of land-based testing. Video of the F-35 using it is pretty freaky, the aircraft looks to be moving way too slow to fly, but it has the benefit of two pillars of thrust from its F135 engine and its attached lift-fan.

Once again, the ship has a huge operating area. With the USMC's help, the Royal Navy will hopefully be able to load that deck up with a few dozen F-35Bs in the coming decade. The ship also appears to be sitting quite high in the water, which makes sense as she has no air wing aboard.

Leaping off the ski-jump.

A spectacular formation shot of the two F-35Bs used in the trials as they wheel around at low level towards the ship. These aircraft belong to U.S. Navy Air Test and Evaluation Squadron VX-23 'Salty Dogs' based out of NAS Patuxent River. These aircraft are 'orange wired' for testing duties and their pilots have led-up the F-35B's shipboard integration program. The Royal Navy's F-35Bs are scattered about in other locations, including in the UK, but it won't be all that long now until they too get a shot at the carrier's deck, too.

This sight will hopefully become all too common in the coming decade, with American and UK F-35Bs operating from the Royal Navy's two new carriers.

F-35Bs finally in the pattern above HMS Queen Elizabeth!

The Queen Elizabeth's unique deck layout offers a ton of room for moving about and for launching, recovering, and storing aircraft.

Here is some official video from the historic day:

This is just the start of a long and complicated process and it will be great to watch the Royal Navy's fixed-wing carrier aviation capability to be reborn in the coming years. But even though this event may be full of high-fives and excitement, the Royal Navy's new carriers remain controversial fixtures within the Ministry of Defense's portfolio. Just how much capability is the Royal Navy, and the MoD as a whole, going to have to sacrifice to keep these ships serviceable, especially considering the fleet is already facing operational shortfalls. But we will leave the debate over these issues for another day. In the meantime, the Royal Navy can bask a bit in the glory of their new ship and its stealth fighters.

As for that F-35B crash at MCAS Beaufort, there has been no grounding order from the Marine corps, so F-35B operations continue as normal, although we still have no idea of what could have been the cause.