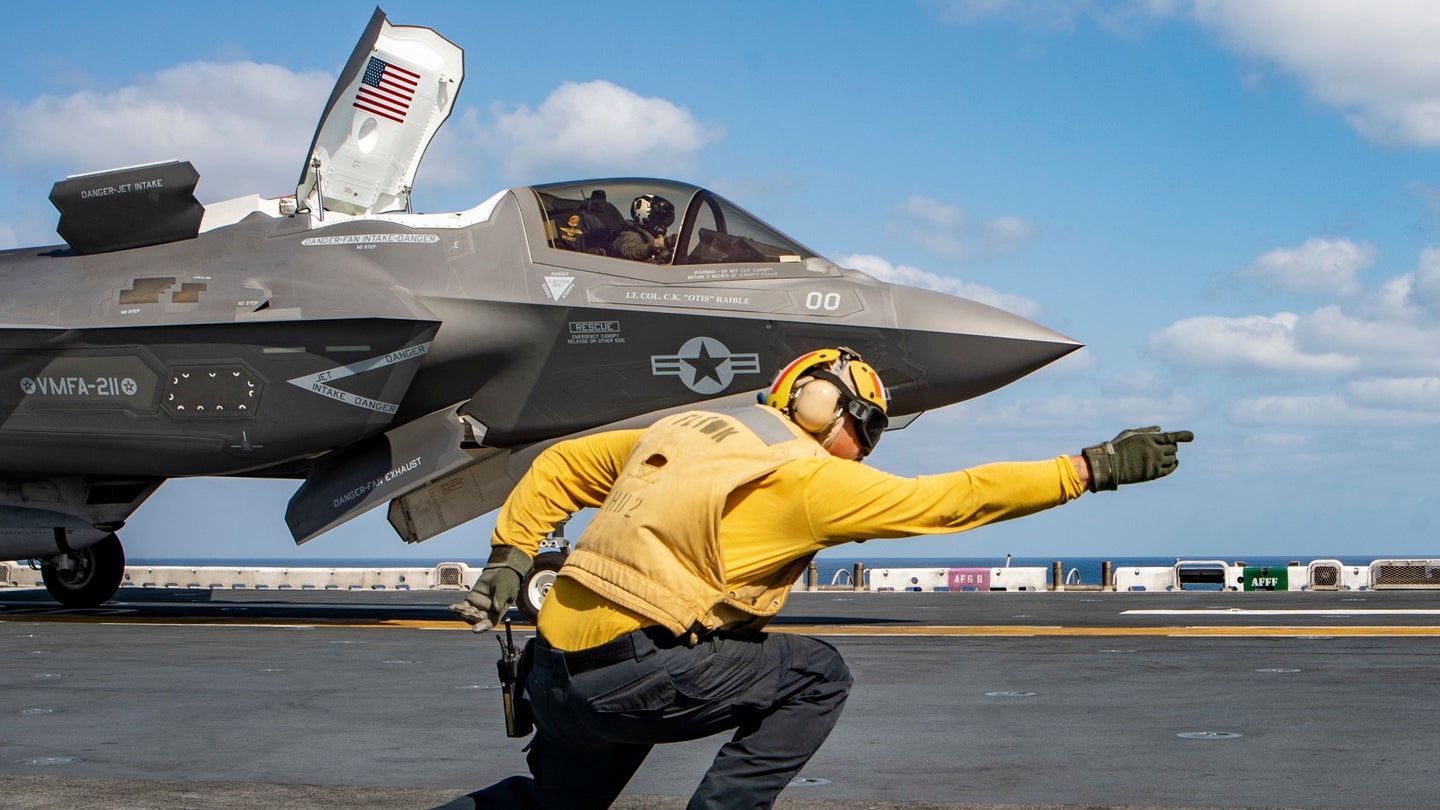 U.S. Marine Corps F-35Bs from Marine Fighter Attack Squadron Two One One, abbreviated VMFA-211, have claimed the title of being the first American Joint Strike Fighters to fly actual combat missions with strikes against unspecified "fixed targets" in Afghanistan. These sorties came after the same jets flew surveillance and reconnaissance missions off the coast of Somalia with full combat loads, poised to strike in that country, if necessary.

CNN was first to report the strikes in Afghanistan, which came on Sept. 27, 2018. The U.S. military has declined to say how many aircraft in total took part in the mission, exactly what munitions they employed, or any specifics about the targets themselves. CNN's sources described the mission's objective as "a fixed Taliban target."

The Marines declared they had reached initial operational capability with the F-35B in 2015 and forward deployed the aircraft to Japan for the first time in 2017. In March 2018, a detachment of the stealth fighters joined the first-in-class amphibious assault ship USS Wasp and her Amphibious Ready Group (ARG) for their first-ever deployment as part of a Marine Expeditionary Unit (MEU). The, in July 2018, another six jets, from VMFA-211, joined the Wasp-class USS Essex and her ARG as part of the 13th MEU, ahead of a routine cruise that would take them to the Horn of Africa and the Middle East.

On Sept. 25, 2018, CNN reported that the Essex's ARG had moved or was moving into the Persian Gulf. That same story said that strikes in Afghanistan could be imminent.

We don't know whether or not any of VMFA-211s remained in Afghanistan after the strike or how they arrived there in the first place. As we at The War Zone noted just days ago, it would have required significant resources for the F-35Bs to get from the Persian Gulf to any Taliban targets.

The most logical course of action would have been for some of the U.S. Air Force's substantial aerial refueling assets based in the Middle East to have supported the operation, helping the F-35Bs fly from the Persian Gulf into the Gulf of Oman, before proceeding into the Indian Ocean and then sending the jets zipping across Pakistan on their way to Afghanistan. In 2017, the Air Force sent a detachment of KC-135 tankers back into Afghanistan proper for the first time in nearly five years to support a surge in aerial operations against the Taliban and other militant groups.

Those aircraft could have then supported the Joint Strike Fighters before and after the strikes and sent them on their way back to the Persian Gulf. It is also possible that the F-35Bs landed at a base in Afghanistan to refuel.

One of the pictures the Marines subsequently released from the mission, seen at the top of this story, showed crews loading GPS-guided Joint Direct Attack Munition (JDAM) bombs onto the aircraft, which would be well suited to strike "fixed" targets. Another image of VMFA-211's jets on board Essex on Sept. 22, 2018, had shown crews loading live laser-guided 500-pound class GBU-12/B Paveway II bombs onto at least one aircraft around the time they were flying missions near Somalia.

There are bound to be questions about the utility of using the stealth fighters for this mission, especially given the permissive nature of the air combat environment in Afghanistan that in no way requires the expensive jet's advanced defensive features. The employment of U.S. Air Force F-22 Raptor stealth fighters for similar low-risk strikes in Afghanistan has drawn criticism, including from that service's own top civilian official. "We should not be using an F-22 to destroy a narcotics factory," Secretary of the Air Force Heather Wilson said in June 2018.

At the same time, the Marines continue to push to further integrate the F-35B into their day-to-day operations as they move to replace all of their fixed-wing combat jets with the Joint Strike Fighters. As such, the service will increasingly have no alternative but to use the aircraft for typical combat missions, no matter how mundane.

These strikes in Afghanistan have given the Corps a valuable opportunity to go through the motions of an actual combat mission for the first time, but with minimal risk. This will help inform future development of tactics, techniques, and procedures for future operations. The Marines have probably been eager to put their Joint Strike Fighters into action since Israel announced it had become the first country to ever send an F-35 into combat in May 2018.

We will keep our eyes and ears open for any additional information about this historic mission and update this story as more information becomes available.

U.S. Naval Forces Central Command has released an additional statement about the mission via U.S. Central Command, describing the strikes as "in support of ground clearance operations." It does not offer any additional detail about the target or targets the F-35Bs engaged in Afghanistan.

However, a U.S. Central Command public affairs officer told The War Zone in a phone call that the Marine jets flew "close air support" missions in support of personnel on the ground. American combat jets do strike fixed targets, such as emplaced heavy weapons or enemy forces situated inside a building, as part of close air support missions. In past, U.S. military officials have also used the separate and distinct terms "interdiction" and "close air support" interchangeably, despite the former referring to strikes against targets far removed from any immediate fighting on the ground.

It's also worth noting that official video of the F-35Bs taking off for the strikes shows that they were carrying 25mm gun pods, as well. We don't know if they conducted any strafing runs against Taliban targets.

Task & Purpose spotted an interesting detail in the official video the Marines released of the aircraft heading out on the strike. One of them has "Lt. Col. C.K. ‘Otis’ Raible" written under the cockpit, which is traditionally where the pilot's name appears.

However, Raible was among those who died when a group of Taliban fighters infiltrated into Camp Bastion, then the Marine Corps' main base, situated in Afghanistan's southern Helmand province, in 2012. The insurgents killed two Marines, wounded another 17, and destroyed nine AV8 Harrier jump jets situated at the base. The aircraft were from VMFA-211 and Raible was the unit commander at the time.

After the attack began, he hastily gathered a number of Marines to launch a counterattack against enemy fighters on the flight line. He remains posthumously nominated for the Silver Star for his actions, but has not yet received the award.