If the missiles actually arrive and stay, they would represent a clear escalation, but Israel won't stop its strikes because of them. 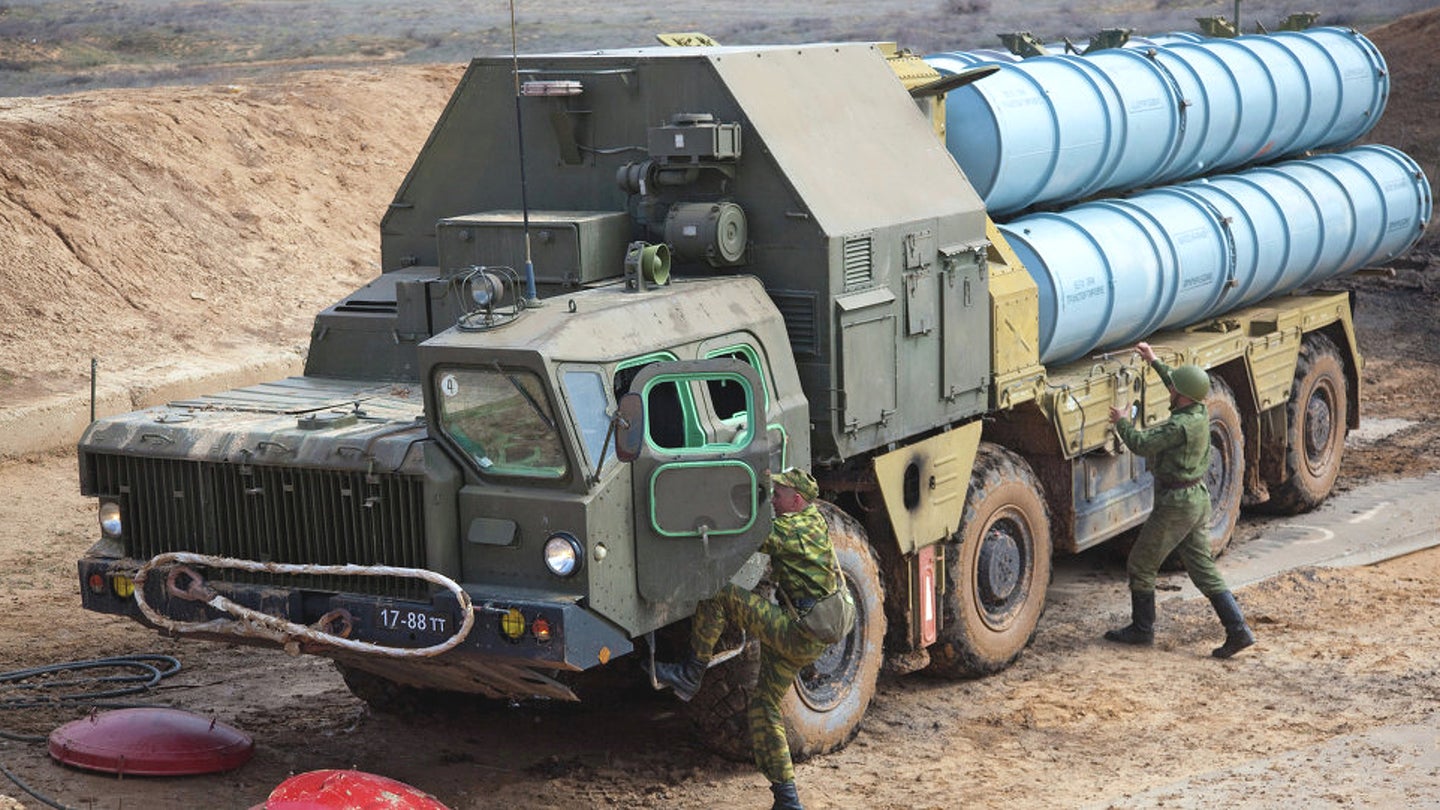 Russia says it will supply Syria with S-300 surface-to-air missile systems, will jam the radar, navigation, and communications systems on any aircraft attacking targets in that country via the Mediterranean Sea, and will also provide equipment to the regime of dictator Bashar Al Assad to rapidly identify Russian military aircraft. This all follows an embarrassing incident where Syrian forces accidentally shot down one of the Kremlin’s Il-20 Coot surveillance aircraft following an Israeli air strike.

Russian Defense Minister Sergei Shoigu made the announcements in a recorded statement in Moscow on Sept. 24, 2018. He had previously said that there would be a response to the shootdown, which occurred on Sept. 18, 2018. Russia had acknowledged the incident was Syria’s fault and was unintentional, but also blamed the loss of the Il-20 and its 14-person crew on how, where, and when Israel decided to strike. In addition, The Kremlin claimed that Israeli officials did not give enough advance warning of the mission via an established deconfliction hotline.

“I will underscore – at the request of the Israeli side, in 2013 we suspended the delivery of S-300 systems that were ready for the dispatch, while the Syrian military had undergone training,” Shoigu said. “Now the situation has changed, and we are not to blame.”

At a second press briefing on Sept. 24, 2018, seen below and unfortunately only available in Russian, Russian Ministry of Defense spokesperson Major General Igor Konashenkov outlined Russia's official timeline of the incident together with tracks reportedly from the radars associated with their own S-400 surface-to-air missile systems in the country showing the aircraft involved.

Russia continues to insist that Israel only gave them "seconds" of advance warning via the hotline and that the relative position of Israeli F-16s to the Il-20 was directly responsible for the outcome of the incident. Initially, the Kremlin went so far as to claim that Israel's jet's deliberately shadowed the Coot in an attempt to avoid detection ahead of their attack.

So far, Israel has not given its own statement on the exact amount of advance notice it gave the Kremlin ahead of its strikes on Sept. 18, 2018. The country does deny its planes were even still in the area when Syrians brought down the Coot and sent Israeli Air Force Major General Amikam Norkin, along with a small delegation, to Moscow in part to brief the Russians on this point.

Whatever the exact details of the inciting incident, long-range S-300s would offer a significant boost to Syrian air defense forces, which rely primarily on older Soviet-era long-range surface-to-air missile system, as well as a variety of old and more modern medium- and short-range Russian-made designs. One of Syria’s SA-5s, also known as the S-200, a long-range system that first entered service in the Soviet Union in the late 1960s, was reportedly responsible for bringing down the Coot.

In addition, “Russia will jam satellite navigation, onboard radars and communication systems of combat aircraft, which attack targets in the Syrian territory, in the regions over the waters of the Mediterranean Sea bordering with Syria,” Shoigu declared. “We are convinced that the implementation of these measures will cool hotheads and prevent ill-considered actions threatening our servicemen. Otherwise, we will have to respond in line with the current situation.”

“Command posts of the Syrian troops and military air defense units will be equipped with automatic control system, which have been supplied only to the Russian Armed Forces,” Shoigu also noted. “This will ensure the centralized management of all Syrian air defense forces and facilities, monitoring of the situation in the airspace and prompt target designation. Most importantly, it will ensure identification of all Russian aircraft by the Syrian air defense forces.”

Shoigu’s remarks are significant and worth taking seriously. The delivery of S-300s to Assad’s regime would be a “significant escalation” of the situation in Syria, U.S. National Security Advisor John Bolton said at a press conference to mark the beginning of the annual U.N. Nations General Assembly gathering in New York on Sept. 24, 2018. He added that he hoped Russia would reconsider.

"[Israeli] Prime Minister [Benjamin] Netanyahu said that transferring advanced weapons systems into irresponsible hands will increase the dangers in the region, and added that Israel will continue to defend its security and its interests," in a phone call with Russian President Vladimir Putin, according to an official Israel government statement. Putin, who had earlier downplayed the seriousness of the Il-20 shoot down, said the plan was “compliant with [the] current situation and aimed at eliminating any potential threat to life of Russian servicemen,” according to a statement from the Russian Foreign Ministry.

However, this is not the first time Russia has threatened to give Assad S-300s. After the massive U.S., U.K., and French cruise missile barrage against various targets in Syria in April 2018, Russian Foreign Minister Sergei Lavrov said that his country would reconsider a long-stalled sale of the surface-to-air missile systems to the Syrian regime. There were rumors later that month, and again in May 2018, that the Kremlin had made good on this threat, but there has not been any evidence to substantiate those claims. Russia has its own S-300s in Syria.

In addition, Shoigu was very careful to stress that Russia would only jam aircraft that appeared to be inbound for attacks on areas of Syria that are situated along or near the country's Mediterranean coastline, which just so happens to be where the Kremlin's Khmeimim air base and Tartus naval base are located. Israel has conducted hundreds of air and missile strikes in Syria since the country’s civil war began and routinely sends aircraft across Lebanon, where they then release standoff weapons and often never actually enter Syrian airspace.

In the U.S.-led operation in April 2018, in addition to strikes originating from the Mediterranean, American aircraft also flew into Syria via Jordan, and U.S. Navy ships launched cruise missiles from the Red Sea and the Persian Gulf. There are also steady reports that Russian forces have been jamming U.S. military manned and unmanned aircraft in Eastern Syria, but we don’t know how much of an impact that has actually had on American-led operations.

If the Russians did follow through in this case with the S-300 deliveries, we still don’t know how many full systems Syria might receive, or of what generation, and how broad an area they might be able to defend. Regardless, Israel has experience training against older Greek S-300PMU-1s and has undoubtedly prepared for operations involving the threat of advanced versions of the system, which are also in service with its arch nemesis Iran.

More importantly, Israel had made it clear, both rhetorically and with its actions, that it will not sit idly by and allow Iran and Iranian-backed groups, such as the Lebanese militant organization Hezbollah, to exploit the situation in Syria to expand their military capabilities and spread their influence. In particular, strikes against weapons shipments to Hezbollah are seen as an existential threat to the country and are non-negotiable.

The Israeli Air Force’s loss of an F-16I Sufa multi-role combat jet to a Syrian SA-5 in February 2018 has done nothing to slow their operational tempo – if anything, the opposite has occurred. In addition, the country has a squadron of F-35I Adir stealth fighters for missions it deems high-risk, but absolutely necessary and says that it has already sent them into combat, but to what extent remains unclear. Israel's increasingly broad menu of standoff weapons and their highly advanced electronic warfare and cyber capabilities also make the news of S-300s being supplied to Syria less of an issue than some want to believe.

Furthermore, Israel routinely targets Assad's air defenses to clear the way for further strikes and is likely to destroy any Syrian-operated S-300s. There is no indication that Russia would be inclined to continue supplying replacement systems to Syria or to engage in any direct conflict with Israeli forces – risking a potential broader conflict with a nuclear-armed opponent.

It was Shoigu’s less threatening comments about improving the situational awareness of Syria's air defenses, which had been linked together on some level since August 2017, that seem to point to the more pressing objective of preventing Assad’s forces from accidentally shooting down any more of Russia’s planes. Despite unfounded conspiracy theories that the Syrian government should have been able to immediately identify the Il-20 as Russian, there is no indication that Assad's forces had this capability, which now appears to be of critical importance.

The inescapable truth of the Il-20 incident is that the routinely indiscriminate actions of Syria’s air defenders put Russian aircraft at nearly as much any Israeli attackers. The entire episode has been immensely embarrassing for the Kremlin, which has long brushed off reports of taking casualties in Syria and otherwise managed to defuse tensions with other neighboring countries in the region over past shoot downs.

A similar situation occurred after Turkish F-16s shot down a Russian Su-24 Fencer combat jet in 2015 that led to a period of significantly escalated tensions between the two countries, but in the end, gave way to improved relations based on intersecting policy objectives. Israel and Russia have found themselves in some level of alignment over their mutual desire to reduce Iran's influence in Syria.

As we noted, Putin had tried to dismiss this incident, as well, but it appears that public outrage at home has forced his government to take some sort of visible action. What the Russian moves are unlikely to do is change the status quo in any meaningful way and there will almost certainly be a flurry of diplomatic maneuvers behind the scenes to fully resolve the issue.

With all this in mind, it is entirely possible that Russia will effectively loan Syria one or more S-300s, make an elaborate display of setting them up in select locations, only to take them back when the “threat has passed” in order to “promote regional stability.” This scenario would allow both Russia and Israel to meet their respective policy agendas and leave the entire situation effectively unchanged. Alternatively, Russia could simply choose not to replace if they are destroyed by Israeli forces.

It's also worth noting that handing over S-300 batteries to Syria puts Russia at risk of having the perception of its air defense products damaged if Israel continues to successfully strike at will in the country or even if it simply destroys them. So far, Syria's dated Russian-made air defenses have performed poorly during the conflict, while Russia's higher-end S-400 and advanced S-300 batteries located South of Latakia and in Tartus have not actively engaged any targets. With Syrians trying to defend their own airspace, weaknesses in the S-300 system may become glaringly clear.

Any Russian-Israeli machinations will also come as Assad continues to try and defend his airspace in one of the most complex air combat environment in decades, with multiple nations and non-nation state actors all with different agendas requiring different rules of engagement in different portions of the country. At present, the Syrian regime is trying to guard its skies in accordance with its own interests, but with strong influence from both Russia and Iran, all the while using Cold War-era technology that was never intended for such a complex combat environment.

All told, improving Assad's air defense capabilities could definitely reduce the likelihood of future accidental shoot downs, but it will also increase the geopolitical volatility surrounding Israel's slow-moving conflict with Assad's forces that will no doubt continue to try to challenge Israeli air strikes. That is if Russia really turns over these systems to Syria in relevant quantities at all, and is willing to replace them repeatedly as Israeli warplanes knock them out.