It's Great To See North And South Korea Get Along, But Kim's Nukes Aren't Going Anywhere

North and South Korea's new declaration hints at acceptance of North Korea as a nuclear power and might reduce the U.S. role in future negotiations. 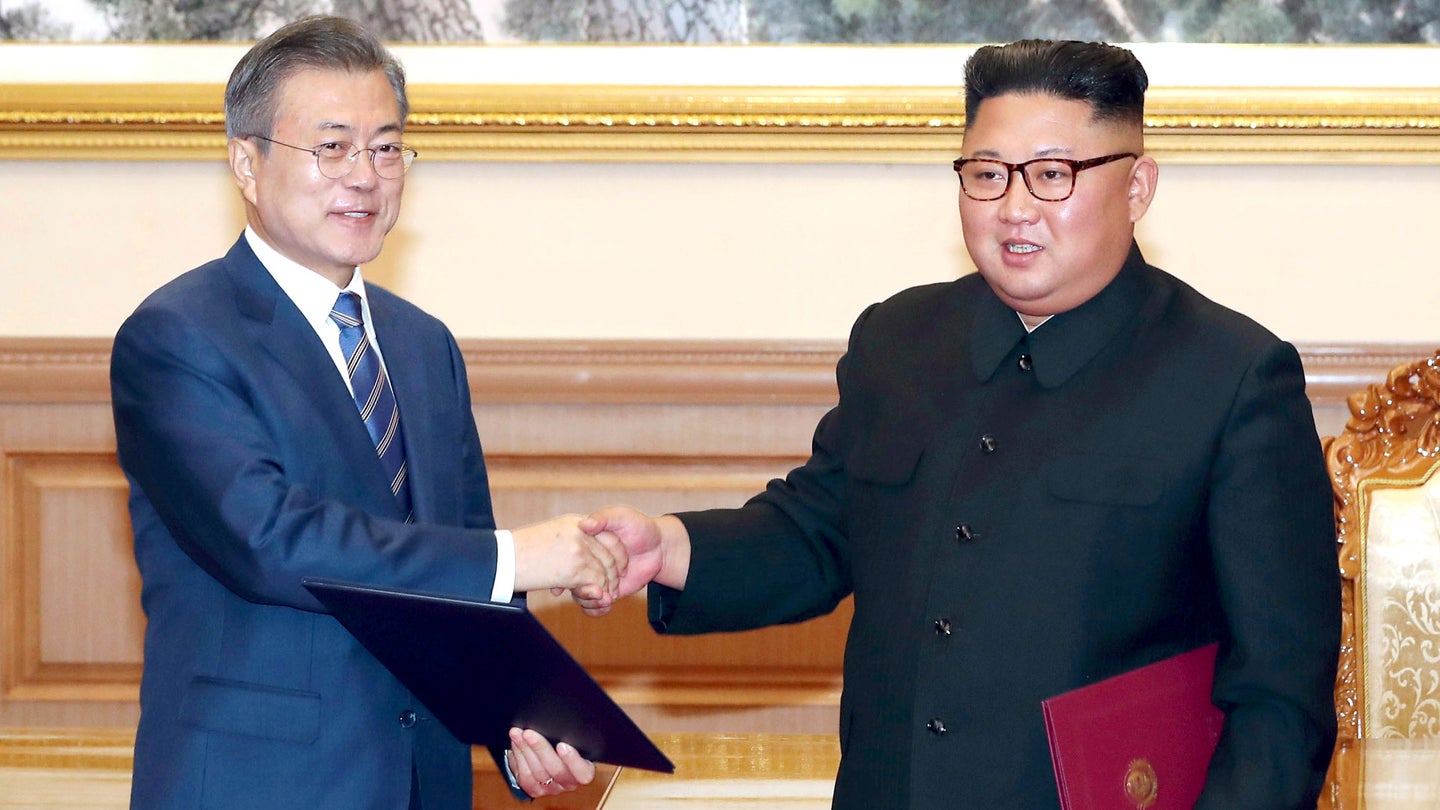 Following their third summit in less than a year, South Korea’s President Moon Jae In and North Korea’s premier Kim Jong Un have made a number of important announcements, including a reduction in forces along the intra-Korean border and a North Korean pledge to shut down the facilities at Yongbyon that makes fissile material for nuclear weapons, at a historic summit in Pyongyang. At the same time, the agreements, as they stand now, would do little to impede North Korea’s continued growth as a nuclear power and have no clear mechanisms so far to verify that they are holding up their end of any arrangements. The outcome of this latest meeting also raises serious questions about whether the South Koreans are on the same page policy-wise as their American counterparts, which could impact the prospects for future U.S. government negotiations with Pyongyang.

Moon and Kim held three days of meetings in the North Korean capital between Sept. 17 and Sept. 19, 2018, before signing what they called the Pyongyang Joint Declaration of September 2018. South Korean Defense Minister Song Young Moo and his North Korean counterpart Rho Kwang Chul also signed a separate document. The two countries’ leaders met for the first time in a historic summit at the border enclave of Panmunjom in April 2018. The two returned to the village the next month for further talks.

“We have planted seeds of peace of prosperity which have ripened into fruits in this autumn,” Kim said in prepared remarks after the signing of the latest declaration. “We will accelerate the pace of inter-Korean cooperation…The destiny of our people lies in our hands.”

You can watch Moon and Kim make their statements, with English translations, below.

Moon used his remarks to explain in greater depth what the two parties had just agreed to do. Here are the pertinent details of Moon and Kim's joint declaration, as well as Song and Rho's military agreements:

The plans and pledges to reduce military forces along the intra-Korean border limit their activities near the DMZ, increase the size and scope of demilitarized areas, and for North Korea specifically to dismantle sites linked to its nuclear and ballistic missile programs are definitely significant. The military confidence-building measures are particularly important given the two countries' long history of skirmishes along their borders and the very real potential for miscalculations that could quickly lead to a devastating all-out conflict.

The removal of certain fixed defenses could make it more difficult for either side to decide to abandon the plan and "snap back" its forces into place. The loss of ability on both sides to monitor activities along the DMZ as tightly as before could also introduce a certain mutual risk that could also be beneficial in deterring breaches of the deal. The plans won't hamper the rapid movement of mobile artillery and other heavy weapons back into those areas, though.

When it comes to Dongchang-ri and Yongbyon, it's less clear if the plan the joint declaration describes will lead to the desired impact. North Korea had already pledged to demolish the facilities at Dongchang-ri, also known as the Sohae Satellite Launching Station at the Singapore Summit with Trump, so they are leveraging an old offer again in that case.

It remains to be seen whether they will make good on their willingness to allow experts to observe the work and who will qualify as a “relevant country,” too. The North Koreans had made similar promises with regards to the demolition of the Punggye-ri nuclear test site, but ultimately only allowed select journalists to visit the site on one specific occasion. There was no opportunity for experts to assess the exact size and nature of that facility, verify that the destruction of the known tunnel entrances had truly rendered it unusable, or conduct any analysis about whether the loss of the site would have any impact on North Korea's nuclear program at all.

It is also unclear how much the loss of Dongchang-ri will hamper North Korea’s nascent space program, which many experts believe has served as a cover for their intercontinental ballistic missiles (ICBM). Even if it does, the North Koreans have made no pledges to halt their now very public and separate ICBM developments. The loss of the engine and other test facilities at Sohae might limit Kim's ability to test new missile developments, but he has working ICBM designs on mobile transporter-erector-launchers now and may have other, more robust testing options elsewhere.

Similarly, Kim’s stated willingness to dismantle Yongbyon, which is still dependent on unspecified “corresponding measures” from the United States, may be equally meaningless given the existence of the Kangson enrichment facility and the possibility that the North Koreans may have additional covert fissile material production sites. “I don’t know,” South Korean presidential spokesperson Yoon Young Chan told reporters at a press conference after the signing ceremony when they asked about how many other such nuclear facilities might exist.

Beyond that, Yoon was also unaware if Moon’s Administration had secured even an initial declaration of how many nuclear sites and total nuclear weapons North Korea has, no matter how dubious it might be. The United States has also unsuccessfully attempted to obtain this information through diplomatic channels. The South Korean presidential spokesperson did say that there were other agreements that did not make it into the public declaration.

Without this data, it’s essentially impossible to gauge how significant North Korea’s offers to dismantle sites or eliminate capabilities might be. Without knowing where the North Koreans are hiding all the parts of their nuclear program, its similarly difficult to verify whether or not they’re implementing their pledges rather than simply moving things to another, unknown site. Without a robust inspection and verification regime, what is or isn't happening at known sites, and whether there might be any freeze in activity, would be equally difficult to judge.

With all of this in mind, the economic and social elements of the September 2018 declaration form a significant signal about future relations between the South and the North. For South Korea, the document in many ways appears to chart a course to a paradigm shift on the Peninsula that accepts North Korea as a nuclear power and seeks to reduce tensions and the possibility of conflict through greater economic and societal linkages.

This greater alignment between the two Koreas could make it virtually impossible for the United States to return to a policy of maximum pressure toward the North. This raises questions about how closely the United States and South Korea have been coordinating on the latter’s diplomatic endeavors.

In particular, while Moon and Kim were talking, the United States was highlighting problems with the existing sanctions regime against North Korea, especially Russia’s apparent non-compliance with those international restrictions. It could be increasingly difficult for the U.S. government to complain about lax sanctions enforcement as one of its own major allies in the region continues to promote greater economic cooperation with Pyongyang.

The present state of North-South affairs could also impact the ability of the United States to make credible threats during its own negotiations with North Korean officials and could set the tenor for any future second meeting between Kim and Trump in Pyongyang's favor. It could be hard for U.S. officials to outline reasonable repercussions for Pyongyang’s failure to follow through on any deal regarding its nuclear and missile programs, or pressure them to agree to one in the first place, if North Korean officials are already making significant progress with South Korea on a bilateral level.

On Sept. 19, 2018, U.S. Secretary of State Mike Pompeo spoke positively about the outcome of the latest North-South summit and revealed that he had spoken earlier that day with North Korean Foreign Minister Ri Yong Ho to discuss restarting stalled negotiations between the two countries. "This will mark the beginning of negotiations to transform U.S.-DPRK relations through the process of rapid denuclearization of North Korea, to be completed by January 2021," he said.

Still, it's hard to see how North Korea would feel compelled to keep to that already wildly optimistic timeline given the latest declaration from Moon and Kim. It's also worth noting, as always, that the North Koreans have a completely different understanding of "denuclearization" of the Korean Peninsula. For Pyongyang, this is a process that has to begin with a formal peace treaty ending the Korean War and could lead to the removal of U.S. troops from the region and other steps well before they even consider eliminating their nuclear arsenal.

Of course, it remains to be seen whether the various declarations between the North and South in 2018 will produce real results. It’s not the first time the two countries have pledged to make progress on many of these same issues and have then failed to do so.

But the tone and scope of the continued summits between Moon and Kim continue to show positive signs. However, this, in turn, could prove to be awkward for the United States, which is looking to preserve the option of a more hard-line approach if its own diplomatic efforts collapse.

The bottom line is that no matter how warm relations between North and South Korea appear to be, there still has yet to be any clear and detailed discussion over actually eliminating North Korea's nuclear arsenal and the delivery systems that go along with it. So far the Kim regime has benefited greatly from the increased engagement while giving up next to nothing tangible regarding its nuclear program in return.