It's not clear how the Kremlin might respond after the embarrassing incident in which Syrian forces accidentally shot down the Russian aircraft. 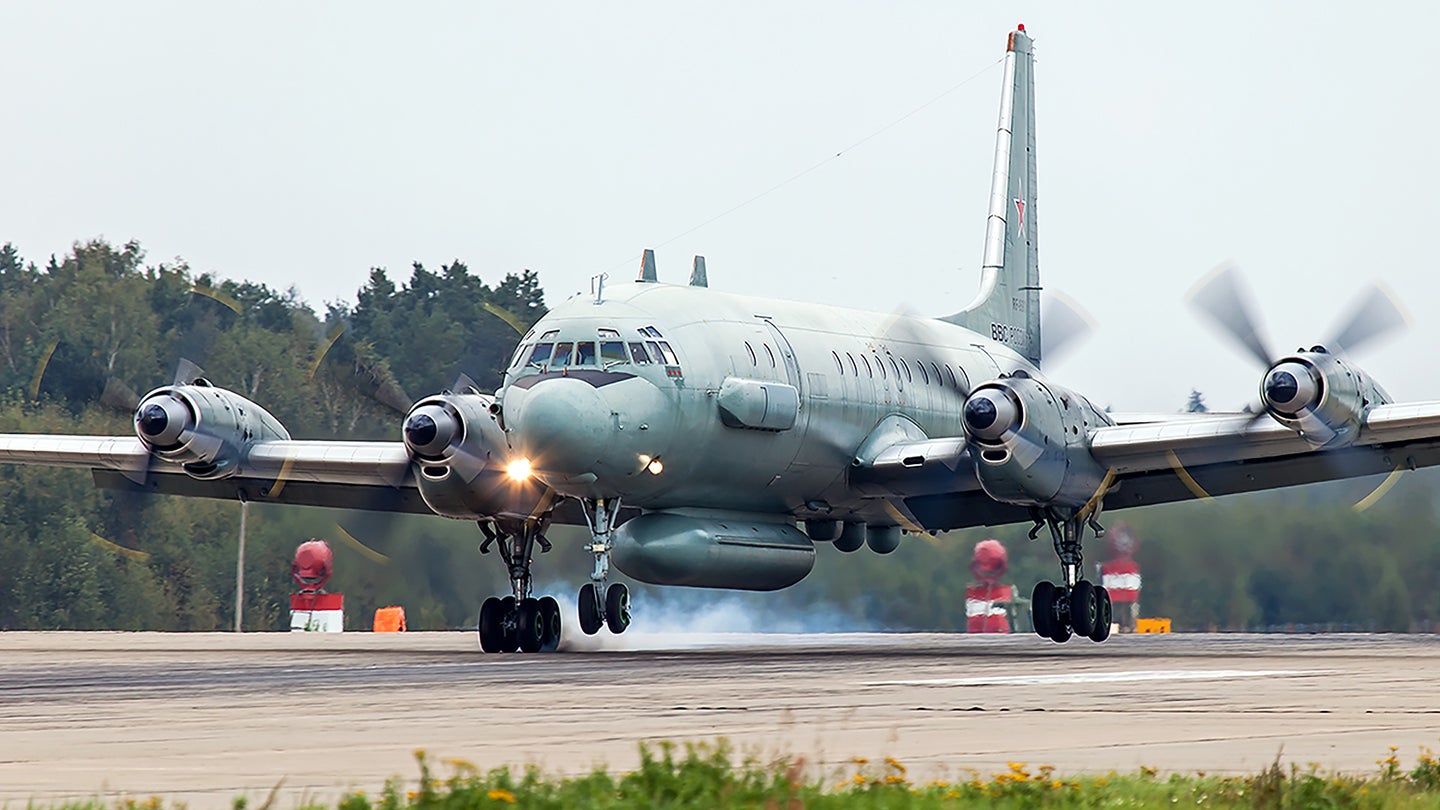 Russian Defense Minister Sergei Shoigu has threatened an unspecified response to future Israeli air strikes in Syria, though Russian President Vladimir Putin has since taken a less aggressive stance. Their statements follow an incident in which Syrian surface-to-air missile operators accidentally shot down one of Russia's Il-20 Coot electronic surveillance planes over the Mediterranean Sea. They were responding to Israeli Air Force F-16s that fired stand-off weapons against targets in the country's coastal Latakia governorate.

The Russians first reported the Il-20 had gone missing in the early hours local time in Syria on Sept. 18, 2018. Russia subsequently confirmed that Syrian forces had inadvertently brought down the plane with an SA-5 surface-to-air missile, but blamed Israel, claiming that its jets had used the aircraft to hide their movements ahead of a series of standoff strikes. Israel subsequently responded by expressing "sorrow" over the incident, but insisting that the Syrian regime of Bashar Al Assad, as well Iran and the Lebanese militant group Hezbollah, were the ones truly responsible for the loss of the Coot and the 14 personnel on board.

"We have informed today our Israeli colleagues, and I have also informed personally the Israeli Defense Minister [Avigdor Lieberman], that such actions will not be left unanswered by us," Shoigu said at a press conference in Moscow later on Sept. 18, 2018. "The Israeli side didn’t issue a notification or, to be more precise, they warned us a minute before conducting the strike. They told us they were about to attack facilities on the Syrian territory, and they did it."

Later Putin seemed to contradict Shoigu, describing what happened as a "chain of tragic circumstances" and dismissing completely unsupported conspiracy theories that the Israelis deliberately shot the Coot down.

"The retaliatory measures will be directed above all to boosting the security of military men and installations in Syria," Putin said. "These will be measures everyone will see."

In addition, Israel has used a deconfliction hotline in the past to alert Russia of impending strikes in Syria. The Israeli Air Force says it did give the Kremlin advance notice in this case, as well, but did not say how much time elapsed between that notification and the first missiles hitting various targets in Latakia.

The IAF posted their official response to the incident on Twitter, stating the following in a string of tweets:

Israel expresses sorrow for the death of the aircrew members of the Russian plane that was downed tonight due to Syrian anti-aircraft fire.Israel holds the Assad regime, whose military shot down the Russian plane, fully responsible for this incident.

Overnight, IAF fighter jets targeted a facility of the Syrian Armed Forces from which systems to manufacture accurate and lethal weapons were about to be transferred on behalf of Iran to Hezbollah in Lebanon.

These weapons were meant to attack Israel, and posed an intolerable threat against it. The IDF and the Russian army have a deconfliction system, which was agreed upon by the states' leaders and has proven itself many times over recent years. This system was in use tonight as well,

1. Extensive and inaccurate Syrian anti-aircraft (Surface to Air missile) fire caused the Russian plane to be hit and downed.

2. When the Syrian Army launched the missiles that hit the Russian plane, IAF jets were already within Israeli airspace.

3. During the strike against the target in Latakia, the Russian plane that was then hit was not within the area of the operation.

4. The Syrian anti-air batteries fired indiscriminately and from what we understand, did not bother to ensure that no Russian planes were in the air.

Israel will share all the relevant information with the Russian Government to review the incident and to confirm the facts in this inquiry.

The target of the strikes was reportedly facilities belonging to the Syrian Organization for Technological Industries, which is linked to Syria's chemical weapons and ballistic missile development programs, and Iranian interests. Israel said that the goal of the strikes was to prevent the transfer of munitions to Hezbollah. The Israelis have conducted hundreds of strikes since the Syrian civil war first erupted in 2011 targeting the Lebanese group. They have since broadened that campaign to target Iran's own forces in the country and other groups aligned with them.

Latakia is also home to Russia's Khmeimim air base, which has hosted a number of Il-20s since Russia first intervened in the conflict in 2015. In this particular instance, the Coot was returning from a mission over neighboring Idlib governorate to monitor the implementation of a Russian-Turkish ceasefire plan in that region and gather intelligence on rebel groups operating there.

That deal averted what experts and observers had worried would be an especially brutal campaign by the Syrian regime to finally reassert complete control over the province, which you can read more about here. Now, Turkey is providing de facto cover for groups there who remain opposed to Assad and the region could become an extension of areas it already occupied in northwestern Syria, which you can read about in more detail here.

Not only is that not at all clear, but it's also highly unlikely. As our own Tyler Rogoway has already noted, unless the Israelis and Russians were actively collaborating on this operation, it is difficult to see how Israel's F-16s could time their movements so perfectly. By all accounts, the Israeli Air Force aircraft never actually flew over Syrian territory.

In addition, the Israeli Air Force claims that its aircraft had launched their weapons before the Il-20 entered the area and that the F-16s were long gone before Syrian air defenders fired any surface-to-air missiles. If the F-16s launched Small Diameter Bombs at their targets as Russia claims, there would be no reason to remain in the area after the weapons dropped off their bomb racks. In addition, there is significant evidence from prior Israeli and U.S.-led operations that Syria's forces have a penchant for firing anti-aircraft weapons indiscriminately during and after a strike in order to lay the groundwork for claims that they shot down incoming threats or drove off the attackers.

After U.S., U.K., and French forces launched a massive missile barrage against targets in Syria in April 2018, Syrian and Russian officials claimed that most of the incoming missiles had gotten shot down. The U.S. military, however, said that Syrian forces fired some 40 missiles on a "ballistic trajectory" and "without guidance" and that they had taken most of their shots after the strikes had actually ended.

This is also not the first time that Syrian and Russian sources have tried to claim that Israel is using third-party nations to cover their operations as a way of excusing the apparently limited capabilities and skills of Syria's air defense system operators. In late April 2018, rumors swirled, without any supporting evidence, that Israeli Air Force F-15s had mimicked their American counterparts to sneak into Syria unnoticed.

It was similarly hard then to imagine why Israel, which carries out perfectly routine strikes in Syria regularly and routinely accepted significant risk in order to carry them out because it sees them as vital to protecting its national interests, would have needed to use this tactic or would have done so at all. It's important to note that the strikes in Latakia were unusual and that Israel typically does not attack that far to the northwest in Syria, but it is not the first time they have reportedly done so and potentially points to an especially time-sensitive target set.

In addition, Russian air defenses, which are technically linked in some fashion with their Syrian partners, have repeatedly either been unable or unwilling to engage Israeli aircraft. The very nature of the standoff weapons used in the strike also negates the need to penetrate into denied territory using some sort of an unwitting decoy plane.

This new incident appears to be particularly embarrassing for Russia. The Kremlin has touted efforts to improve Syria's air defense capabilities, declared total victory in the country multiple times despite continued attacks on its forces, and has now abandoned plans to support a Syrian regime offensive into Idlib and settled for a deal with Turkey that it had previously rejected.

Russia, which initially implied that France might have been responsible for bringing down the Il-20, seems eager to find a way to deflect blame from its erstwhile Syrian partners and save face over the entire situation. At the same time, Israel and Russia have grown closer in recent months over a certain amount of shared interests in the region, including a desire to check Iran's spreading influence.

The Kremlin has had relatively timid responses to the loss of its aircraft to hostile fire in the past, as well. In 2015, it similarly threatened to attack Turkish forces and cut ties with authorities in Ankara after Turkey's F-16s shot down a Russian Su-24 Fencer combat jet along its border with Syria. The Russians never made good on those threats and, as we already noted, the two countries are now coordinating their Syrian campaigns.

Combined with Putin's more conciliatory comments, it's unlikely that either country is looking for a larger fight, but the Russians could still promise to engage Israeli aircraft in the future under certain circumstances. Whether they actually plan to or not, the Kremlin might hope that create no-go areas for the Israeli Air Force or at least make their risk planning process more difficult. This, in turn, could make them more wary of attacking targets near Khmeimim Air Base or Russia's naval base in Tartus further to the south.

Russia might also look to employ some sort of hybrid warfare concept that blends military and political activities, such as doing nothing to prevent Iranian militias from congregating along Israel's border with Syria or to keep Assad from making incursions into the internationally-recognized demilitarized zone in the contested Golan Heights region.

This could be easier in this case given recent revelations that Israel had secretly supported anti-regime militants in southern Syria for years. Russia has long twisted American and other foreign support for rebel groups in Syria, as well as normal operations elsewhere, into unfounded conspiracy theories about those operations actually being a cover for providing aid to terrorists, such as Al Qaeda and ISIS.

Israel and Russia could also decide to go in an entirely different direction and strike deal or set of deals to deconflict their activities. Regardless, the incident highlights just how quickly the situation can change in and around Syria and how fast it can escalate to the point of touching off a broader regional conflict. In his statement on the matter, U.S. Secretary of State Mike Pompeo highlighted how dangerous the region has become before calling for a peaceful resolution to the conflict in Syria and an end to "provocative" Iranian activities there.

"The United States expresses deep sorrow for the death of the aircrew of the Russian plane that was downed by Syrian regime anti-aircraft fire," Pompeo wrote on Sept. 18, 2018. "Yesterday's unfortunate incident reminds us of the need to find permanent, peaceful, and political resolutions to the many overlapping conflicts in the region and the danger of tragic miscalculation in Syria's crowded theater of operations."

Russia appears to have chosen not to downplay this particular situation in the interests of de-escalating the situation. At that same time, it remains to be seen what the Kremlin's actual response will be to future Israeli air strikes, which are sure to come.

We will be keeping our eyes open for additional developments and update this story as necessary.

A special thanks to our friend Ivan Voukadinov for supplying the awesome banner shot seen at the top of this article.