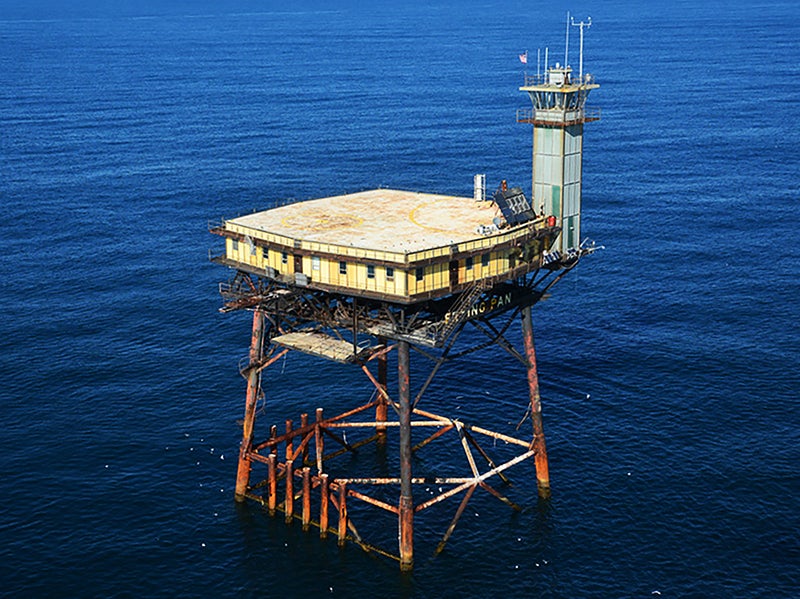 If you have tuned into Hurricane Florence coverage today you probably saw footage of a rusty old deck high above the water with an American flag pulled tight in the whipping wind. That unique view was taken from a camera installed atop Frying Pan Tower, a 54-year-old decommissioned Coast Guard light tower located 34 miles northeast off Bald Head Island, North Carolina. The structure served as a navigational lighthouse up until 1992, but now it is privately owned and operates as an 'adventure bed and breakfast' as well as the single source of continuous video depicting Florence's approaching onslaught.

The tower, also referred to as Frying Pan Shoals, dominated today's news coverage on Hurricane Florence, providing an eerily awesome forward point of view of the storm as it marched slowly towards the Carolina coastline.

The Coast Guard shut the tower down in 1992. As for its current role, the website for the remote outpost reads:

Over the last few years along with a bunch of volunteers, we have been restoring the Frying Pan Tower so that it will last another 50 years. With a hot shower, full electricity restored, a complete stainless steel kitchen and recreation room that were designed to keep restless 20 something Coast Guard crewmen happy after a long day's activities maintaining the facility. The tower was built before GPS and when ships were likely to run aground on the Frying Pan Shoals that are between us and the deeper ocean waters!  Volunteer with us and we are sure you'll find a work activity that you will also enjoy!  And after a full day, you’ll be able to share your pictures with your friends and family back on land with our wireless Internet access!  Then, it’s up to the 80’ x 80’ helipad or further up to the 130’ corner light tower with its 360 degree ocean and sky views where the Milky Way jumps out at you and the moon smiles down on your good fortune to have an experience of a lifetime!

Try our world class fishing in the aquarium like waters around the perimeter of the tower and test your skills hauling in anything from black sea bass, to cobia, to wahoo, to mahi mahi, to giant African pompano! And with the rock ledges all around us, an average 6 pound spiny lobster is just waiting for you to grab! With our super-fast water to top hoist, you can be spearfishing or diving in less than a minute on our diver’s lift and if your dates are set but the ocean is wild and rugged then a helicopter is standing by to make sure your trip is both beautiful and safe to and from the tower!

Act soon while we are still relatively unknown because although the world is finding out about us, we're still hiding in relative anonymity and weekends are still open!  So come join us while we work and play in the most unique location off the East Coast!

The Frying Pan Tower is located out of sight of land in 50' of clear blue Atlantic waters! With the Gulf Stream close by, we often are pleasantly warm when it's still cold onshore and mild when it's too hot to walk on the sand at the beach so don’t let a great weekend go to waste, BOOK your Adventure today!

The tower, which is really a modified drilling platform, sits on a shoal fifty feet below the waterline. During its active career, it would host continuous rotations of Coasties. Life on a lonely lighthouse platform out in the Atlantic—one that had to stay lit even during major storms—was not for the faint of heart. So creature comforts were factored into the tower's construction, offering as comfortable of a lifestyle as possible for the era and for such a remote location.

5,000 square feet of living space that make up the lower part of the platform includes seven bedrooms, a recreation area, a kitchen, an office, storage areas and so on. The top of the platform acts as a landing pad but it can also be accessed by boat, although there is no easy way of doing so as the lower portion of a circular staircase was ripped off in a storm. With the stairs gone, the winch and scaling a ladder are the only alternatives.

After over half a century of being bathed in saltwater, the structure needs some TLC but it has been deemed in overall sound condition by a recent survey. Originally the Coast Guard was going to tear it down, but they ended up auctioning it off in 2009 for half a million dollars to a company named Shipwrecks Inc. that wanted to use the spot for a sport fishing and diving outpost. Supposedly the sea life around the tower is incredible. That plan fell through when Shipwrecks Inc. defaulted on making a down-payment and in 2010 the facility was snapped up for a cool $85,000 by North Carolina native Richard Neal. Neal still owns it today and works with a team of passionate volunteers to restore the tower and execute his adventure hotel vision.

We love guys like Neal who spend their most valued time keeping history alive for others to enjoy, and the more far out the project, the better. Just learning about the tower also reminds us of the brave souls who inhabited it continuously for all those years so that mariners could navigate safely. Imagine trying to sleep at night during a massive storm that can produce waves nearly as high as the platform itself and there is always the chance that a ship could collide with it in an age that predated GPS and other automated navigational aids.

At this point in time, it looks like the eye of the hurricane could pass directly over the 85-foot tall structure, which would offer a unique viewing experience for throngs of viewers and major news outlets that are glued to the tower's webcam.

So there you have it—Frying Pan Tower, the unlikely star of Hurricane Florence coverage.

The emergency charter application states in part that “there is absolutely no comparable alternative to the use of Antonov’s AN-225 aircraft.”