How U.S. Taxpayers Are Spending $1.8B For Afghanistan To Fly A Couple Dozen A-29 Attack Planes

The estimated annual sustainment costs alone are more than twice what the U.S. Air Force pays to operate a squadron of F-16s for a year. 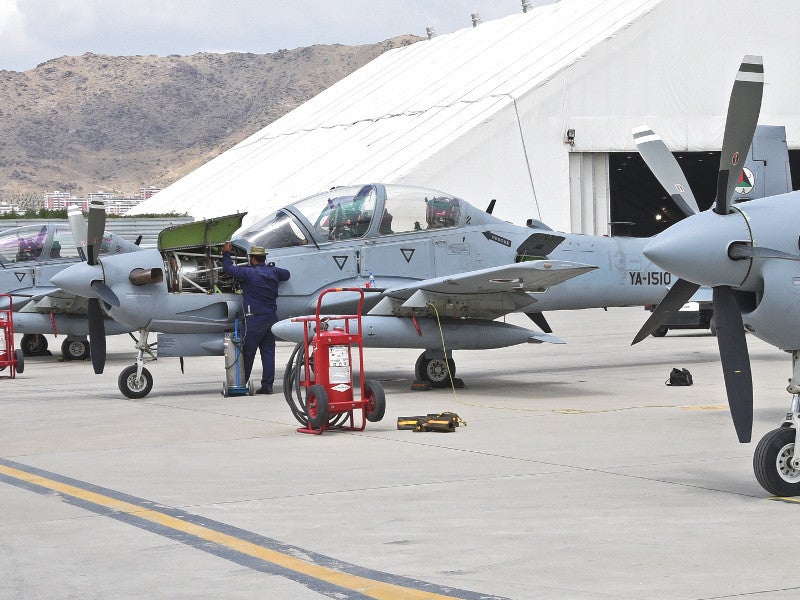 The U.S. military recently awarded the Sierra Nevada Corporation, or SNC, a deal worth over $1.8 billion dollars to support and grow the Afghan Air Force’s fleet of A-29 Super Tucano light attack aircraft over the next five years. Now we know much more about the exact costs involved in supporting the Afghan planes, the total number of which will grow to least 25 in the coming years.

On Sept. 11, 2018, the U.S. Air Force released an official justification for the spending on the U.S. government’s central contracting website, FedBizOpps. Any U.S. government agency has to submit one of these documents for approval when it proposes handing out a sole-source deal, as was the case in this case. The Pentagon had initially announced the contract, a modification to a previous award, in its daily contracting announcement on Sept. 4, 2018.

“SNC is the only company capable of providing these services … without experiencing substantial duplication of cost that is not expected to be recovered through competition and unacceptable delays in fulfilling AAF [Afghan Air Force] requirements,” the contracting document explained. “Delays will result in the reduction of the AAF’s ability to directly support and assist Afghan National Security Forces (ANSF) with air-to-ground fires and limit the ANSF's ability to conduct operations that provide security to the people of Afghanistan and foster legitimacy for the GIRoA [Government of the Islamic Republic of Afghanistan].”

The justification says that the approximately $1.808 billion covers work between Jan. 1, 2019 and Dec. 31, 2024, and is broken into seven different components, each with their own estimated value. The money will come out of the Afghan Security Forces Fund within the Pentagon's budget.

Here are the salient details:

The Super Tucanos represent a core part of the U.S.-backed Afghan Aviation Transition Plan, which aims to grow the Afghan Air Force into a capable force that is able to conduct operations against internal threats on its own. The planes flew a third of all Afghan air strikes between April 1, 2018, and June 30, 2018, according to the Pentagon. Unfortunately, As we at The War Zone

on multiple occasions, the NATO-led coalition has and continues to struggle to help Afghanistan meet this goal due to a host of factors, including corruption, desertion, and low literacy rates – something U.S. officials have referred to as "the Afghan condition."

Only in March 2018, did the Afghan A-29s finally drop laser-guided bombs for the first time in combat, almost four years after the program began and nearly two years after the aircraft entered combat. That the aircraft gave the Afghan Air Force a precision-guided munitions capability had been a major talking point for the U.S. military, as well, despite the planes were actually incapable of doing so until 2017. We at The War Zone were first to report on that reality.

“The AAF's diminishing ability to directly support and assist Afghan National Security Forces (ANSF) with air-to-ground fires limits the ANSF’s ability to conduct operations that provide security to the people of Afghanistan and foster legitimacy for the Government of the Islamic Republic of Afghanistan (GIRoA),” the Air Force said in its own justification for the sole-source contract to SNC. So, it’s already that the United States feels compelled to spend more than $1.8 billion in the next five years to ensure the Afghans maintain at least a modicum of capability in the meantime.

However, it’s not clear exactly how the Air Force arrived at these estimated cost figures, which are significantly higher than one might expect them to be, even for the full future fleet of 25 A-29s. The combined ICS and CLS totals alone seem exorbitant, working out to more than $158 million dollars every year.

In 2013, the RAND Corporation evaluated the costs associated with operating and maintaining U.S. Air Force units flying F-16 Viper fighter jets, which are much more expensive to operate and sustain than the A-29. Using Fiscal Year 2010 dollars, the think tank estimated that it cost the Air Force approximately $63.6 million – closer to $70 million in 2018 dollars – to keep Alabama Air National Guard's 187th Fighter Wing, which has around 22 Block 30 F-16C/D Viper fighter jets, running for 12 months.

Using RAND's figures, the annual operating cost of a U.S. Air Force F-16 squadron in 2013, adjusted for inflation, was less than half that of what the Afghan Air Force could find itself spending to operate an equivalent number of A-29s for a year. The annual ICS costs alone are comparable to the costs the 100th Fighter Squadron was incurring when the think tank conducted its study.

It's hard to understand how this could be an accurate representation of the costs. Part of this could have to do with the need to support activities spread across four locations in two countries, but one would still expect the final price tag for these services to be lower given the much smaller logistical footprint and overall operating costs of the A-29 versus the F-16. The Air Force says that the per-flight-hour cost for a Viper is around $22,000. SNC says the Super Tucano's operating cost is closer to $1,000 per flight hour.

It is more difficult to accurately assess whether the other cost categories the Air Force outlined in the contract seem overly expensive since they include a far more diverse selection of items and services and there is no line-by-line breakdown. The estimated $1.8 billion is a contract "ceiling," as well, suggesting that the final value of the deal might not reach that amount.

Regardless, it's also worth noting that the contract will only go toward supporting Afghanistan's Super Tucanos and doesn’t include any of the money that the United States will also spend over the same period on supporting many of the Afghan Air Force’s other aircraft.  At present, the Afghans are only capable of supporting one type, the Mi-17 helicopter, with only a minimum of contractor support.

As part of a U.S.-backed transition plan, refurbished UH-60A+ Black Hawks, which presently require contractors to support nearly 100 percent of their maintenance and logistical needs, are set to replace those choppers in the coming years. The Afghan Air Force relies entirely on private companies for maintenance and logistics support for its six C-130H cargo planes, as well.

This all comes as a resurgent Taliban continues to challenge the country's government, even briefly taking control of Ghazni, the capital of the province of the same name, in August 2018. The insurgents appear to be trying to pressure the United States and its foreign allies into negotiating a settlement favorable to their agenda and that could include the departure of NATO-led forces.

American airpower was essential to ejecting the Taliban from Ghazni, as it has been to keeping the insurgents, along with other militant groups, at bay for nearly two decades now. On Aug. 22, 2108, in his last press conference as head of all U.S. and NATO-led coalition forces in Afghanistan, retiring U.S. Army General John Nicholson went so far as to laud the progress of the Afghan Air Force toward achieving operational independence as an indicator of broader successes in the country against the insurgency.

“The [Afghan] air force is doing over half of the airstrikes in the country,” Nicholson said. “This was never the case before.”

But if the case of the Afghan Air Force’s A-29s is any indication, it remains very much an American force, and a costly one at that, which looks set to remain dependent on U.S. support for at least the next five years.

The pilot used the weapon to avoid civilian casualties, but the NATO-led coalition continues to downplay the importance of this capability.