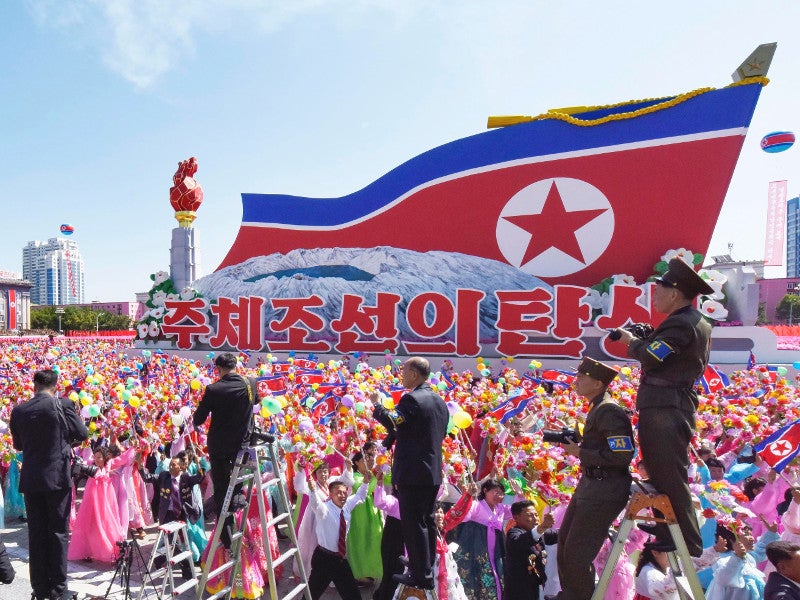 North Korea recently held yet another major parade, full of military hardware, to celebrate the 70th anniversary of the country’s founding, but its nuclear-capable intercontinental ballistic missiles were notably absent. There is still absolutely no indication that North Korean premier Kim Jong Un intends to ever give up these weapons, but he could be looking to give U.S. President Donald Trump a political victory in hopes of jumpstarting negotiations between the two countries and securing new concessions.

The parade itself occurred in the North Korean capital Pyongyang on Sept. 9, 2018, and had already been the subject of weeks of intense scrutiny on the part of North Korea experts and the media. Almost half of the procession consisted of floats and other elements that reflected Kim's publicly stated focus on developing the country’s economy and civilian infrastructure. The regime also held a spectacular mass sporting event, full of highly choreographed gymnastics and dances, the first time one like it has occurred in five years.

“It’s incredible how North Korea stays ‘on brand’ – last year’s parade was all about nukes and this year it’s all about the economy,” CNN international correspondent Will Ripley Tweeted out from Pyongyang during the ceremonies. “But one thing that hasn’t changed – praise & adulation for Kim Jong Un and his predecessors Kim Jong Il and Kim Il Sung was still front and center.”

While the parade had a heavy economic focus and left out the most controversial parts of the country’s arsenal, it was still primarily a military event. Pictures and video show throngs of goose-stepping soldiers, tanks, ground-launched anti-ship cruise missiles, artillery, anti-aircraft systems, and other weapons as military aircraft, including some of North Korea’s dated, but surprisingly relevant An-2 biplanes, flew overhead.

The North Koreans also showed off what appeared to be a new, more modern-looking self-propelled howitzer with a design reminiscent of the South Korean K-9 Thunder. There was also a heretofore unseen 6x6 armored anti-tank guided missile carrier that appeared to be derived from the Soviet-era BTR-80 armored personnel carrier. Though the exact specifications of these vehicles are unclear, they are an indication that Kim’s regime continues to improve its conventional military capabilities in defiance of international criticism and economic sanctions.

Still, the decision to leave the ICBM’s at their bases was enough to draw laudatory statements from U.S. President Donald Trump, who has generally spoken positively of North Korea’s brutal dictator Kim since the two men met for a historic summit in Singapore in June 2018. “This is a big and very positive statement from North Korea,” Trump wrote on Twitter on Sept. 9, 2018.

“Thank you To Chairman Kim. We will both prove everyone wrong!” he continued “There is nothing like good dialogue from two people that like each other! Much better than before I took office.”

"[Kim] made it clear that his trust in President Trump remains – and will remain – unchanged, even though there have recently been some difficulties in negotiations between the North and the United States," South Korean Envoy to North Korea Chung Eui Yong said on Sept. 6, 2018, following a vist to Pyongyang. "He said he wished he could eliminate 70 years of hostile history with the United States, improve North Korea-U.S. relations, and realize denuclearization within the first term of President Trump."

But despite Kim's claims that he wished he could give up North Korea's nuclear weapons, his decision not to show off intercontinental ballistic missiles (ICBM) such as the Hwasong-15 should not necessarily be seen as an indication that the country is willing to negotiate away those capabilities. If anything, it’s an indication that the country’s government feels it has established itself as a legitimate nuclear power, as its officials and state media outlets routinely explain, and sees no need to publicly flaunt these capabilities any more than the United States does.

“I spoke with two North Koreans who participated in the parade. Both said they felt their country didn’t need to display ICBMs because they’ve ‘already completed’ their nuclear program,” CNN’s reporter Ripley wrote in another Tweet. “When I asked one man if he thinks North Korea should denuclearize, he quickly replied ‘never!’”

Both of these statements are almost surely reflective of North Korea’s state policy. It is highly unlikely that North Koreans attending such a public and heavily monitored event would have dared to offer up a contradictory opinion to a foreign journalist.

have noted repeatedly in the past, the North Korean definition of “denuclearizing the Korean Peninsula” is widely at odds with the U.S. government definition of that proposition. For authorities in Pyongyang, it is a description of a complex process that centers on eliminating the threat of nuclear war against North Korea. This is implicitly linked to a formal peace deal between the United Staes and North Korea, rather than an armistice, the removal of American troops from South Korea, and an end to the U.S. government's policy of including South Korea under the protection of its so-called "nuclear umbrella." Only then, would the North Koreans consider giving up their nuclear arsenal and delivery systems, which they see as a guarantor of the regime’s survival.

Though, as Trump regularly boasts, the North Koreans have not tested a long-range missile or a nuclear weapon in months, every other publicly available indication is that the country continues to expand its ability to develop and produce both types of weapon systems. Officials in Pyongyang reportedly rebuffed

repeated attempts by U.S. Secretary of State Mike Pompeo since the Singapore summit to get the country to agree to dismantle even a token part of its nuclear arsenal. In fact, they haven't even gotten to the point where North Korea is willing to declare how many nuclear weapons and delivery systems it actually has, and the nature of each weapon in its inventory, a key step needed robust denuclearization negotiations to even begin.

On Sept. 10, 2018, National Security Advisor John Bolton, in a talk at the conversation Federalist Society, again complained that the North Koreans were not upholding their end of the bargain on denuclearization. Bolton, among others in the U.S. government, understands denuclearizing the Korean Peninsula to mean a deal by which North Korea pledges to dismantle its existing nuclear capabilities and take concrete steps to prevent it from ever acquiring nuclear weapons again in the future.

"We're still waiting for them," he said, despite the two countries not even agreeing on the basic definition of denuclearization. "[Trump] can't make the North Koreans walk through the door he's holding open."

On Sept. 10, 2018, NBC News reported that North Korea looks set to produce between five and eight more nuclear warheads this year, the same as it was before the U.S. president’s historic summit with Kim, according to unnamed U.S. officials. Earlier in 2018, experts and observers also identified what appear to be new and expanded production facilities for missiles and fissile material.

Still, the composition of the 70th-anniversary parade is notable and could indicate North Korea’s continued interested in negotiating with the United States and Trump in particular. In August 2018, the U.S. president indicated his desire to meet with Kim again.

For its part, North Korea also appears to be in favor of this, which makes perfect sense. By any reasonable assessment, North Korea came away from the Singapore summit with concessions, an improved international standing, and the long-sought image of its totalitarian leader on an even ground with a sitting U.S. President while giving up very little to the United States in return.

Most importantly, Trump called off major U.S.-South Korean military exercises without receiving any guarantee that the North Koreans would make even a goodwill gesture in response. There are no plans to call off any future American drills in South Korea, but officials in Pyongyang might see an opportunity to try to negotiate on that point again.

Kim and his advisors could hope to try and exploit Trump’s freewheeling style to elicit other beneficial deals, as well. North Korea is especially eager to secure a formal end to the Korean War, replacing the existing Armistice Agreement with an actual peace deal, which could help give it greater access to the international community and normalize its position in international politics.

Separately and without representatives from the United States present, North and South Korean officials have been meeting to discuss a lasting peace agreement, among other things, as part of a process that began with another summit in 2018 between South Korea's President Moon Jae In and Kim Jong Un. North Korea's goal here also appears to be to drive a wedge in policy between authorities in Seoul and their American counterparts, potentially putting the two long-standing allies at odds over the future of the Peninsula.

As such, the nature of the recent parade itself seems to be geared, at least in part, toward giving Trump a tangible political victory to bolster the case for renewed negotiations. In August 2018, North Korean state media praised Trump and his willingness to meet with Kim, blaming his detractors for holding up normalization in relations between the two countries and progress toward a lasting peace. This is a particularly noteworthy change in tone for these outlets when talking about any U.S. president.

At the same time, keeping the IBCMs out of the spotlight doesn’t draw unnecessary attention from the United States or other world powers, including China. It also does nothing to challenge the U.S. government’s narrative that Chinese authorities are the ones not doing enough to help encourage North Korea to denuclearize, further fueling an increasingly bitter trade war between the two countries. All of this distracts from what the North Koreans are doing themselves, chiefly building more missiles and nuclear weapons, and violating international sanctions to do it.

So far, we don’t know for sure how the United States or North Korea will proceed diplomatically from here. There are no firm plans yet for another Trump-Kim summit and U.S. officials continue to struggle in negotiating more minor deals, including the repatriation of additional remains of fallen American service members from the Korean War. Earlier in September 2018, the U.S. and North Korean officials met in the South Korean border enclave of Panmunjom to try to kickstart those talks.

Both Trump and Kim obviously want to meet again, but appear to have wildly different expectations of what a second summit might offer. There is nothing to suggest the North Korean regime would be at all willing to negotiate away its nuclear weapons and long-range missiles, except in exchange for significant concessions that the United States seems equally unlikely to offer.