The aircraft carrier’s historic visit to Naval Station Mayport is a prelude to long-awaited and critical shipboard tests of the F-35B. 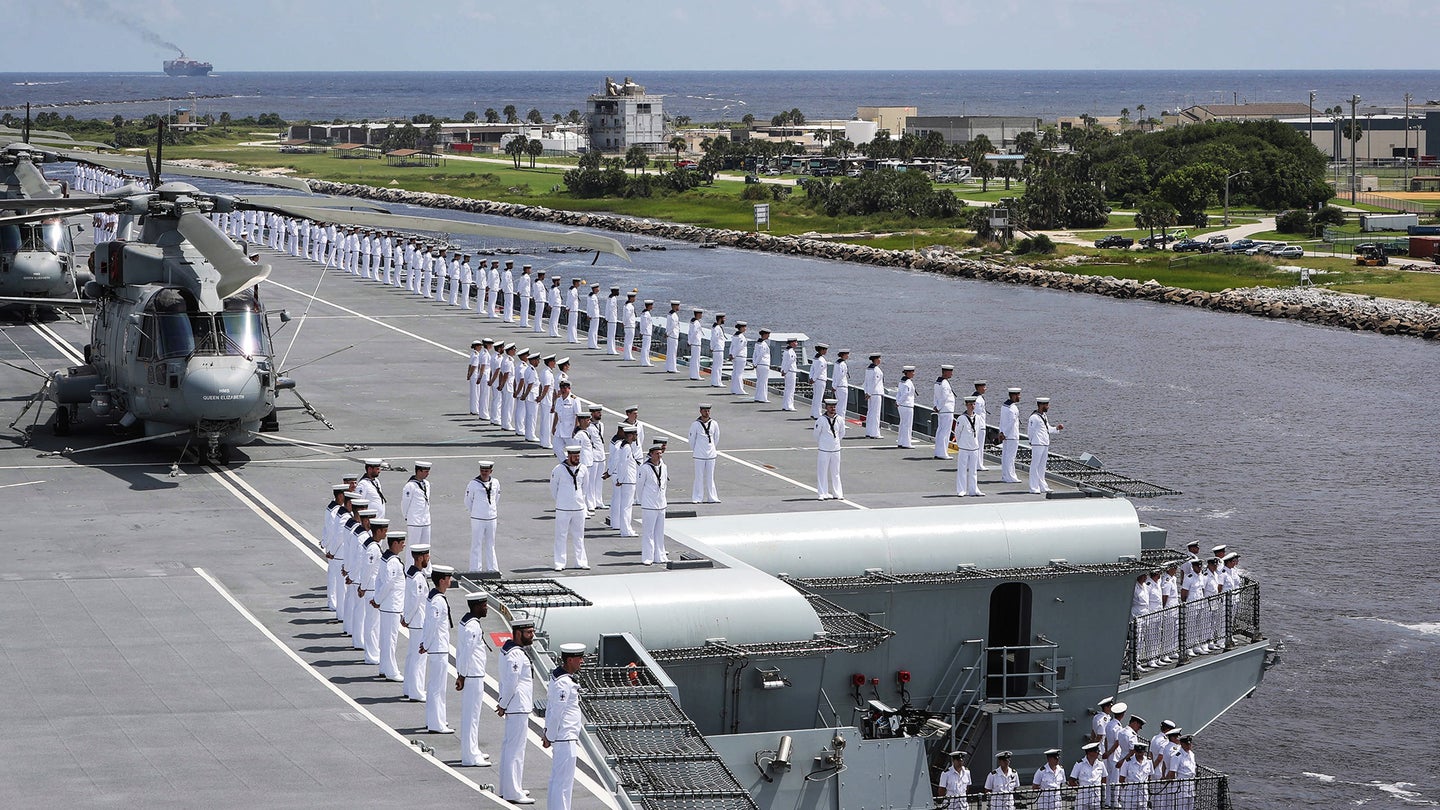 Six sailors assigned to the Royal Navy's new aircraft carrier HMS Queen Elizabeth got a little too celebratory during the ship's inaugural visit to the United States. The big vessel—displacing 65,000 tons—and her Type 23 frigate escort docked at Naval Station Mayport in Florida on Thursday. It's visiting the United States to host F-35B strike-fighters for the very first time.

"One of the three pushed and pulled an officer; the second refused to put his hands behind his back and was stunned by a Taser; and the third was actively fighting and refused to stop, officers said.

A sergeant with the police department said the sailors were getting into drunken fights mostly with one another.

Officials said there have been no further issues since speaking with the ship's leaders."

Not the best first impression, but it's not like these things don't happen. U.S. Navy sailors have gotten into their share of trouble around the globe over the years too.

The 11-week flight operations test period will see the ship head north, off the Maryland coast, where a pair of F-35Bs will make their first landings and takeoffs from its spacious deck. It will mark the first time a fixed wing aircraft has set down on a Royal Navy carrier since 2010, when Harrier GR9s took off from the HMS Ark Royal

for the last time.

The UK Ministry of Defense described the upcoming critical developmental evolution as such:

Around 200 supporting staff, including pilots, engineers, maintainers and data analysts will be joined by two ‘orange wired’ test aircraft, belonging to the ITF, which are expected to conduct 500 takeoffs and landings during their 11-week period at sea.

The aim of these initial, or ‘developmental’ trials are to ascertain, through the specially equipped aircraft and sensors around the ship, the operating parameters of the aircraft and ship, in a range of conditions. Similar successful trials were conducted by HMS Queen Elizabeth at sea earlier this year for Rotary Wing aircraft.

Four F-35B Lightning developmental test pilots, who are members of the ITF, will embark to fly the aircraft; three British, one American. The British personnel comprise a Royal Navy Commander, a Squadron Leader from the Royal Air Force and one civilian test pilot. They will be joined by a Major from the US Marine Corps.

The trials follow the recent arrival into the UK of the first joint Royal Navy, Royal Air Force F-35B jets, based at RAF Marham. ‘Operational testing’, utilizing British F-35B aircraft are scheduled to take place on board HMS Queen Elizabeth next year.

The deployment, known as ‘WESTLANT 18’, will be the first-time HMS Queen Elizabeth will have sailed across the Atlantic. As well as the vital deck trials, it will also involve exercises to prove the ability to operate with other nations’ maritime and aviation assets, as well as the landing of Royal Marines and their equipment ashore in the United States, to conduct training with their US counterparts.

USMC F-35Bs will operate alongside their UK counterparts aboard HMS Queen Elizabeth once she is declared operational in the coming decade.

It's also worth noting that Mayport lost its resident supercarrier when USS John F. Kennedy (CV-67) was retired in 2007. The community, and Florida in general, have been trying to get another carrier based in Mayport ever since. Currently, the naval base lacks the support infrastructure for nuclear-powered vessels, so the biggest ship based there is the amphibious assault ship USS Iwo Jima (LHD-7).

The Navy has said upgrading the facility for nuclear operations would be cost prohibitive, while proponents of the idea say it's strategically absurd to have all east coast-based supercarriers stationed in one place, that being Norfolk, Virginia.

With interest growing in the U.S. Navy procuring smaller, conventionally-powered carriers sometime in the future as nuclear powered supercarriers have drastically increased in price and just getting rid of them once they are retired could cost billions. Above these issues, there are unique operational advantages to fielding smaller, conventionally powered carriers—ones very similar to HMS Queen Elizabeth but configured for catapult and arresting gear operations. Mayport would likely be the first place a vessel like this would be stationed.

With all that in mind, the visit of HMS Queen Elizabeth will certainly be an example that Mayport will use when trying to make their case to bring a carrier back to their community. Also, as the Navy and USMC learn more about Queen Elizabeth, the proponents for fielding smaller carriers that use conventional fuel could also increase.

We'll report back as this highly important deployment of HMS Queen Elizabeth proceeds and hopefully, there won't be any more arrests to report.