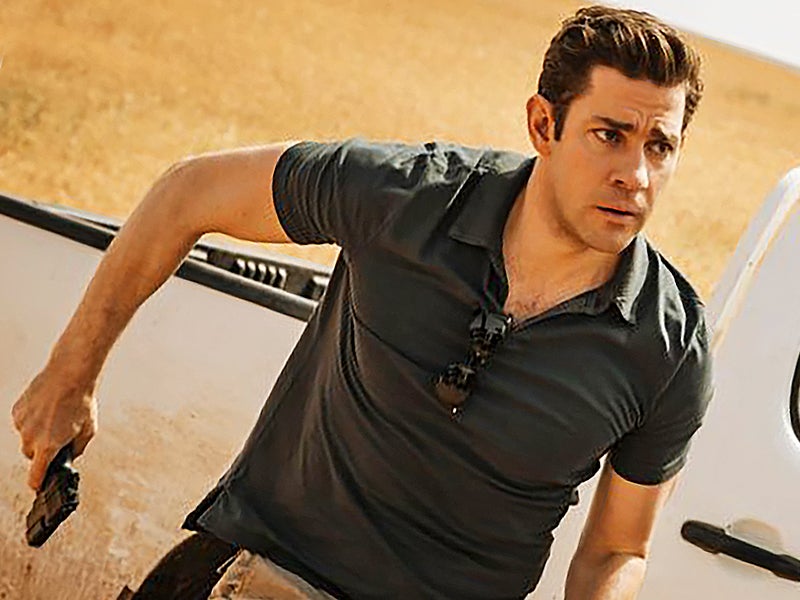 They say we live in a golden age of television and I can't really argue with that. There is so much quality content being put out with the advent of streaming services, in addition to premium cable channels and a few highlights on basic cable, that it can be hard to know what series is worth investing your time into. But there was one show in development that I was particularly excited for—Amazon Video's Jack Ryan.

Based on the characters from Tom Clancy's brilliant books that inspired movies like Hunt For The Red October and Clear and Present Danger, Tom Clancy's Jack Ryan seemed like one of the most logical high-end television reboots and one that could have immense staying power and versatility. With the right team of writers, it could also help us better reflect on the complex geopolitical realities of our increasingly chaotic world. And above all that, I'm just always down for a good spy thriller.

With all this in mind, I fired up the Amazon Video app on my television and dove into the eight-episode first season run of Jack Ryan. After the final episode's credits rolled I was left flabbergasted, but for all the wrong reasons.

First off, let's talk about the new Jack Ryan played by John Krasinski. Yes, Jim Halpert from The Office is now flexing his acting muscles as a CIA analyst turned action hero. The role has been held by four other players in the past: Alec Baldwin, Harrison Ford, Ben Affleck, and Chris Pine. Every single one of these actors brought something different to the role, with the first two becoming legends in my mind and the others being far less memorable. Still, I really enjoyed every Jack Ryan movie aside from Shadow Recruit, which was lackluster and tried too hard to emulate the success of the Bourne Identity series of films.

Krasinski is a good actor who has a proven likable quality that spans both male and female audiences. We all know he can do comedy, but he can also do action, as proven in 13 Hours, a film I think was grossly underrated. In addition, Tom Clancy's Jack Ryan premiered following what has been widely viewed as a total directing, producing, acting, and box office success for Krasinski in the form of the horror film A Quiet Place. So to call him a rising star with proven talent would be a big understatement.

So what does the long-hyped new show do with Krasinski's unique mix of talents?

First off, they weigh him down with an overplayed and dour arch of an ex-Marine with PTSD. I am all for getting the horrors of this affliction out to the masses, but Tom Clancy's

Jack Ryan does it with the finesse of a .50 caliber machine gun, not a sniper's rifle. Instead of playing on Krasinski's every-guy chops and ability to be subtly humorous—which are perfect attributes for the Jack Ryan role—he is assigned a surprisingly wooden character with all around low-quality material to work with. Still, at times Krasinski's personality shines through the bullethole riddled script, and that's not necessarily a good thing because it reminds us of what could have been.

And that theme runs through nearly every tangent of Jack Ryan season one. The entire show is derivative, uncreative, and mish-mashed, all while trying—but failing drastically—to exist on some higher narrative plane. Instead of a brilliant Jack Ryan whose analyst mind is his greatest weapon and fish-out-of-water set pieces, we get a soldier first Jack Ryan with the analyst thing goofily tagged on. The entire endeavor is far more brawn than brain and is packed full of writing choices that are so tropey that at some points you are left wondering if this thing was once written as a parody.

The places the show goes and what it does are totally familiar. Not just in terms of what we have seen in many past spy and action films, but also in what we have seen in very recent and laughably similar television—namely in a far superior show, Showtime's Homeland. How on earth the writer's room moved forward with these scripts without realizing major parts of them have already aired recently on a competing and well-established show is beyond me. It is jarring at times and wondering how exactly it happened totally takes you out of the story and especially the action sequences.

Even Wendell Pierce, who plays another (now) deeply troubled figure, James Greer—previously a jovial fan-favorite character who was famously played by James Earl Jones in earlier Jack Ryan films—seemed as lost in the script as his charter was lost in life. Pierce's dialogue is full of snappy retorts and one-liners that seem strangely out of place and, at times, downright forced. Once again, the poor writing really casts a long shadow here, and frankly, it is below Pierce's talents.

Even the origin stories of the major players are foolishly rushed. For instance, Jack goes from a mild-mannered economic analyst to taking on hardened terrorists in hand-to-hand combat in the first episode's runtime. When Jack says his famous "I'm just an analyst" line, instead of being a pleading protest it becomes something of a wink to the audience as to just how stupid all this is.

The different plot streams that are supposedly interconnected—think Syriana, Babel, etc—are also so clumsily derived that they are nearly falling away from each other. The one with the drone pilot is so weak, played the hell out, and cheesy that it should have never made the final cut.

Another mistake was made by not giving this show a great intro, but the fact that there is next to no intro at all is jarring and odd in itself. Although this sounds like a nitpick, it really speaks to the production's other strange choices and sets a cheap tone for the show as a first impression.

What's most puzzling of all is that clearly, the opportunity here was to infuse a new style and really distinct narrative into the Jack Ryan universe that isn't restricted by a movie's runtime. Considering all the competition, a smarter spy thriller that was more grounded in tradecraft, geopolitics, current events, and most important, reality, than straight-up thrills—something even Homeland has increasingly struggled with—would have been truly exciting. This way, major action elements would really have stakes and could be handled with a realistic panache. Such a concept could have taken Jack Ryan to the next level and would have allowed it to compete in terms of quality in an increasingly crowded space.

Instead, we get an uncannily unoriginal and imitative series that seems to go out of its way not to use its talented players to anywhere near their inherent potential.

What a huge, blatant, and downright puzzling missed opportunity.

With all this said, I do actually think the show can be salvaged. It already has been renewed, so even with these issues, Amazon is doubling down by spending big bucks on another season, which is really quite remarkable considering how anemic season one was. The entire production needs to be retooled, and the writer's room, in particular, needs a thorough flushing.

What comes next should be a team with a cohesive and unique vision, one that will use the over-the-top action hero stuff very wisely and sparingly. That team should also bring in advisors who have worked for The Agency and let their real experience help drive the narrative. It doesn't have to be hyperrealistic, at times it can even be humorous, but in its current state, it has zero credibility in the realism department, which strays from Tom Clancy's original vision.

And give the Middle Eastern-centric plots a break. There are plenty of other very interesting enemies to go after these days and not all bad guys have dark complextions and pray toward Mecca a few times a day. Above all else, allow the actors to play on the strengths and not wallow in their weaknesses. Also, why not look at a series/procedural format with some long-lead elements woven in that can be addressed in multi-episode arcs? Mix it up a little. This form of television is due for a high-end renaissance of sorts and Tom Clancy's Jack Ryan may be a perfect vehicle to make that happen.

I don't think you will find any bigger cheerleader for a television adaptation of Tom Clancy's work than me, but Jack Ryan, in season one form, should serve as the guide of exactly how not to execute such a mission.