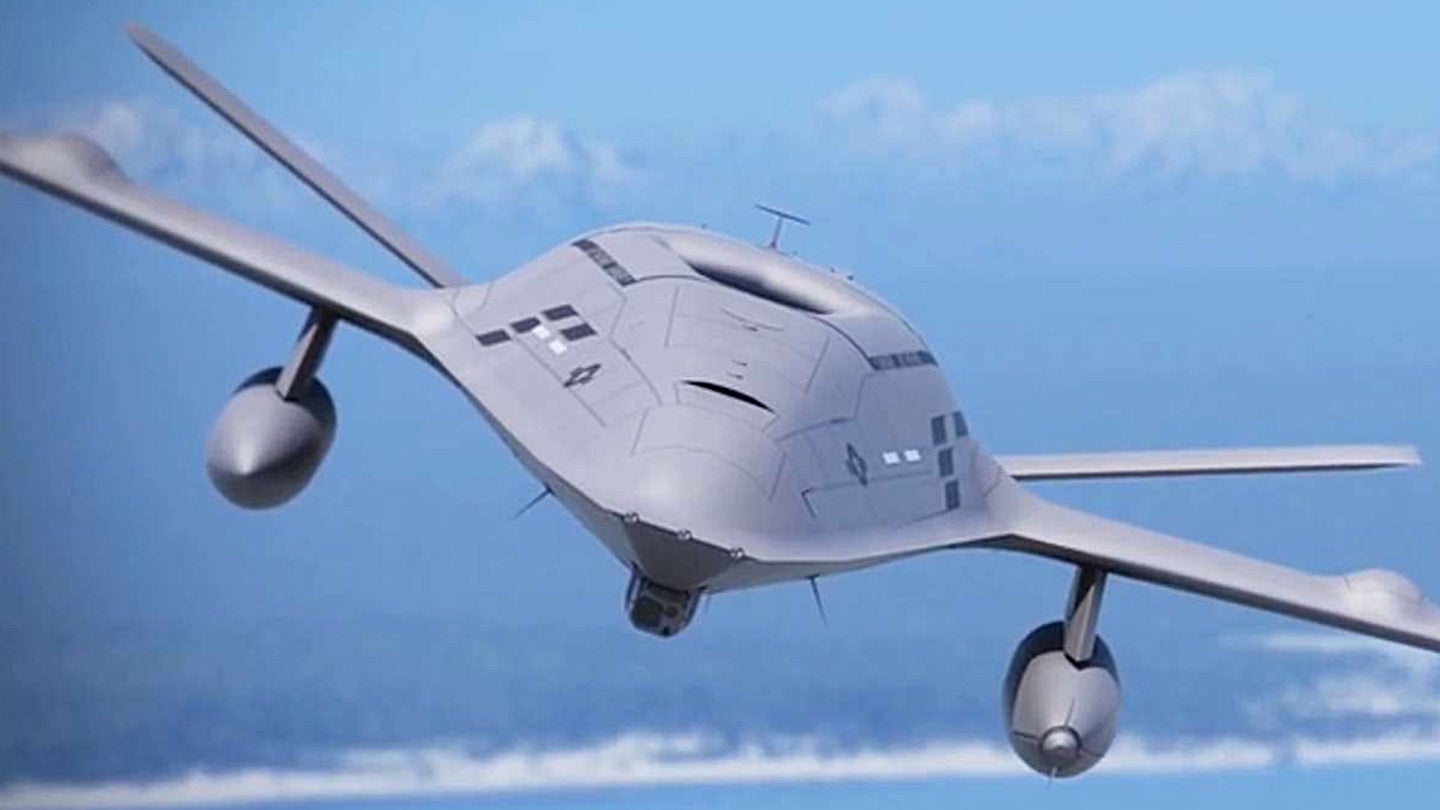 The U.S. Navy has announced that Boeing has won the contract to build four MQ-25 Stingray carrier-launched unmanned aerial refueling tankers. This is the culmination of a contracting process that began in earnest in 2017, but also reflects the latest developments in a saga that dates back nearly two decades.

Boeing had submitted its striking design to the MQ-25 competition last December, facing off against General Atomics and Lockheed Martin. In October 2017, Northrop Grumman announced it would not compete for the contract with a modified version of its X-47B unmanned aircraft, which the Navy had tested extensively as a carrier-borne platform between 2011 and 2015. Boeing was the only entrant with any sort of a fully realized prototype capable of flight.

The Boeing Co., St. Louis, Missouri, is awarded a ceiling price $805,318,853 fixed-price-incentive-firm-target contract to provide the design, development, fabrication, test, verification, certification, delivery, and support of four MQ-25A unmanned air vehicles, including integration into the carrier air wing to provide an initial operational capability to the Navy.  The work will be performed in St. Louis, Missouri (45.5 percent); Indianapolis, Indiana (6.9 percent); Cedar Rapids, Iowa (3.1 percent); Quebec, Canada (3.1 percent); Palm Bay, Florida (2.3 percent); San Diego, California (1.5 percent); and various locations inside and outside the continental U.S. (37.6 percent), and is expected to be completed in August 2024.  Fiscal 2018 research, development, test and evaluation (Navy) funds in the amount of $79,050,820 will be obligated at time of award, none of which will expire at the end of the current fiscal year.  This contract was competitively procured via an electronic request for proposals; three offers were received.  The Naval Air Systems Command, Patuxent River, Maryland, is the contracting activity (N00019-18-C-1012).

A huge congratulations for Boeing and the St. Louis team!

You can read all out past MQ-25 coverage here and we will update this post as more information becomes available.

Boeing has released the following comment on today's announcement:

Boeing was awarded the engineering and manufacturing development contract to provide four aircraft. Boeing plans to perform the MQ-25 work in St. Louis.

“As a company, we made an investment in both our team and in an unmanned aircraft system that meets the U.S. Navy’s refueling requirements,” said Leanne Caret, president and CEO, Boeing Defense, Space & Security. “The fact that we’re already preparing for first flight is thanks to an outstanding team who understands the Navy and their need to have this important asset on carrier decks around the world.”

MQ-25 is designed to provide the U.S. Navy with a much-needed refueling capability. According to the U.S. Navy, the MQ-25 Stingray will allow for better use of combat strike fighters by extending the range of deployed Boeing F/A-18 Super Hornet, Boeing EA-18G Growler, and Lockheed Martin F-35C aircraft. MQ-25 will also seamlessly integrate with a carrier’s catapult and launch and recovery systems.

Boeing has been providing carrier aircraft to the U.S. Navy for more than 90 years.

Here is the Navy's release concerning the announcement:

This fixed-price-incentive-firm-target contract with a ceiling price of $805.3 million provides for the design, development, fabrication, test, delivery, and support of four MQ-25A unmanned air vehicles, including integration into the carrier air wing for an initial operational capability by 2024.

“MQ-25A is a hallmark acquisition program,” said Assistant Secretary of the Navy for Research, Development, and Acquisition James F. Geurts. “This program is a great example of how the acquisition and requirements communities work hand in hand to rapidly deliver capabilities to our Sailors and Marines in the fleet.”

When operational, MQ-25 will improve the performance, efficiency, and safety of the carrier air wing and provide longer range and greater persistence tanking capability to execute missions that otherwise could not be performed.

“This is an historic day,” said Chief of Naval Operations Adm. John Richardson. “We will look back on this day and recognize that this event represents a dramatic shift in the way we define warfighting requirements, work with industry, integrate unmanned and manned aircraft, and improve the lethality of the airwing — all at relevant speed.  Everyone who helped achieve this milestone should be proud we're here.  But we have a lot more to do. It’s not the time to take our foot off the gas.  Let's keep charging."

The award is the culmination of a competitive source selection process supported by personnel from Naval Air Systems Command and the Unmanned Carrier Aviation program office (PMA-268) at Patuxent River.

MQ-25 is an accelerated acquisition program that expedites decisions that will enable rapid actions with less overhead. The intent is to significantly reduce development timelines from contract award to initial operational capability by five to six years.  By reducing the number of key performance parameters to mission tanking and carrier suitability, industry has increased flexibility to rapidly design a system that meets those requirements.