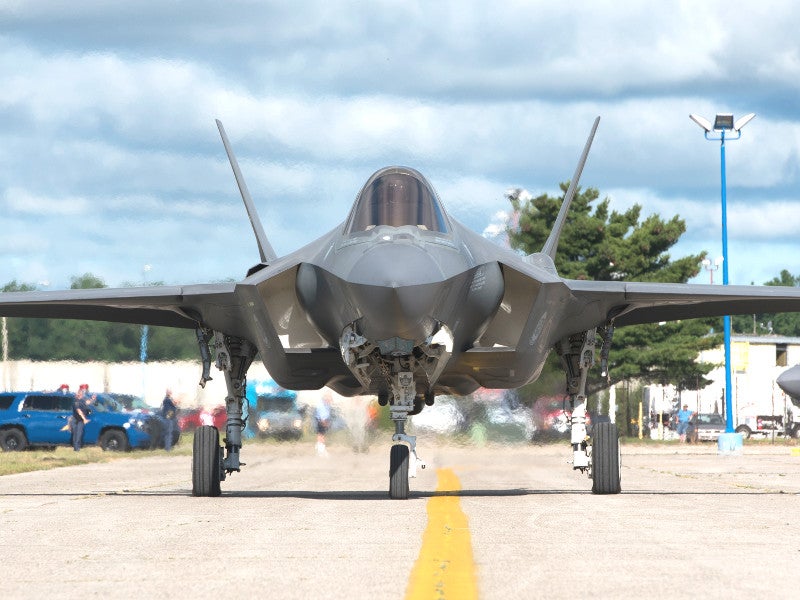 A U.S. Air Force F-35A Joint Strike Fighter from the 33rd Fighter Wing at Eglin Air Force base has made an emergency landing at Eglin Air Force Base in Florida. Though there are still limited details about what happened, the stealthy fighter apparently suffered an issue in flight and its nose gear collapsed after it touched down and had parked.

The mishap occurred at around 12:50 PM local time at Eglin, according to an official press release from the 33rd. The plane, sitting nose down on the tarmac, was visible from a highway outside the base. The Wing oversees U.S. Air Force, Navy, and Marine Corps Joint Strike Fighter pilot training and the Florida base also hosts foreign F-35 pilot training contingents.

"The aircraft landed safely and parked when the front nose gear collapsed. There was one person on board," the 33rd's press release added. "Fire crews responded immediately and the pilot suffered no injuries as a result of the incident."

Photographs showed a crash truck positioned near the F-35, but it is not clear whether or not the in-flight emergency (IFE) actually involved a fire. Deploying a firetruck is a standard response during tactical jet IFE recoveries regardless of indications of a fire onboard the stricken jet. But it's also worth noting that F-35s have experienced engine fires in the past.

In 2014, another Air Force F-35A at Eglin suffered a catastrophic blade release in its F135 engine right before takeoff, which led to a massive fire. In 2016, a faulty bracket inside the weapons bay of a U.S. Marine Corps F-35B led to another fire that totaled that aircraft. That same year, a huge gust of wind led to yet another engine fire in an F-35A at Mountain Home Air Force Base in Idaho.

There are also reports that a second F-35 may have suffered a bird strike that caused physical damage to the outside of the aircraft, although they are unconfirmed at this time.

It's not clear exactly how much damage has been done to the F-35 photographed resting on its nose, but some of the jet's most complex and sensitive electronics are housed in its nose, including its APG-81 AESA radar and its Electro-Optical Targeting System (EOTS). The enclosure for the latter system is positioned underneath the nose, which would increase the likelihood of it getting damaged in this incident.