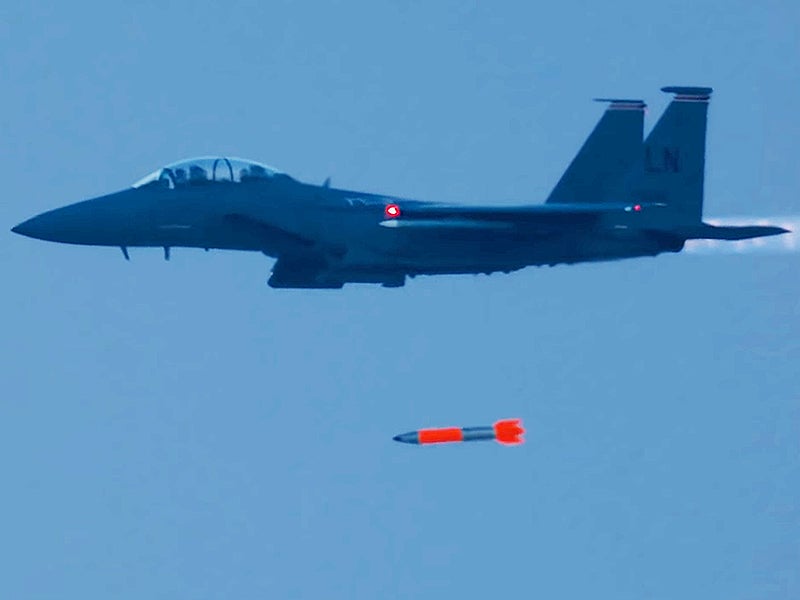 Last November, we brought you a rare tour of Tonopah Test Range, a normally shy and sensitive installation located among the USAF's restricted range in the middle of the Nevada desert. Now Sandia National Labs has posted an incredibly well-produced video showing how all the facets of a nuclear weapons delivery test mission come together in an incredibly elegant fashion.

In this case, F-15E Strike Eagles are seen dropping inert B61-3/4 tactical nuclear bombs. In one clip we can see the bomb's spin-stabilization rockets fire and in a series of others, you can see a parachute deploy. These depict two delivery profiles. The first being a medium altitude delivery and the other a low altitude drop—at 900 feet to be exact.

In regards to the latter, during an actual nuclear strike, the parachute would allow the F-15E to make it a safe distance away before detonation, with the warhead detonating at a pre-described height above ground, or in lay-down mode, where the bomb would lay on the ground a finite amount of time before detonating.

Yes, it would be one terrible way to go with one of these things splayed out on the ground in front of you shortly before being vaporized by its thermonuclear hellfire.

Currently, the new 'smart' B61-12 is deep in development, some of which has occurred at Tonopah Test Range. The B61-12 is slated to replace all four B61 variants still in use. The program is so expensive that each of the weapons is literally worth more than its weight in gold!

Beyond the ominous nature of the test subject, the video gives a great sense of many of the components that go into a single test and just how heavily instrumented and staffed the range is during these evolutions. Among all the advanced sensors and gear we also see some of the range's dilapidated infrastructure, which is unsurprising as it has been actively supporting America's nuclear apparatus, among other duties, for 61 years.

What we don't see is nearby Tonopah Test Range Airport that has its own amazing history. It includes foreign materiel exploitation (FME) programs, acting as the highly clandestine operational home and now the resting place of the F-117 Nighthawk, along with other classified operational and test duties, many of which continue on till this very day.

With nuclear weapons experiencing a renaissance of sorts within the Department of Defense, at least for now, Tonopah Test Range's star is set to shine a bit brighter within the sprawling constellation of test and development facilities that collectively support America's massive arsenal.