The engine detonated, sending shards tearing through the aircraft and we don’t know if similar incidents could occur with U.S. Navy jets. 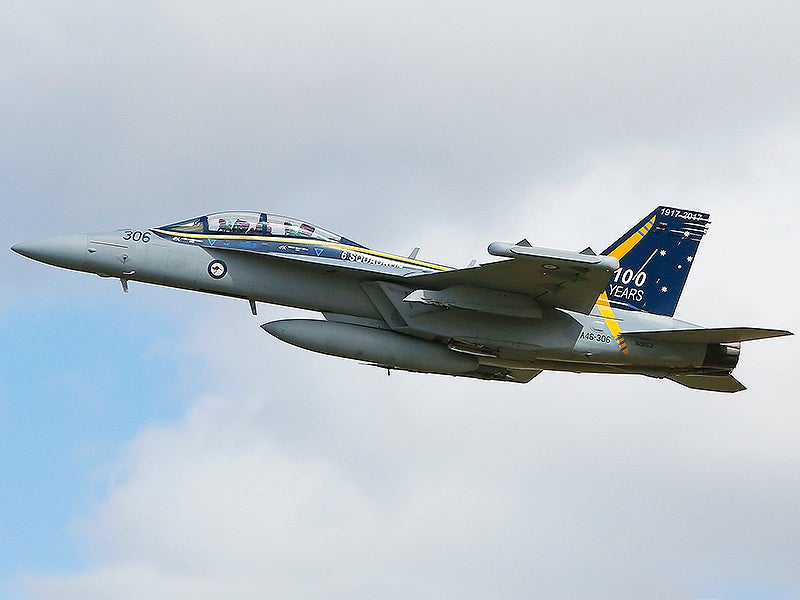 We are finally getting information as to the cause of a bizarre mishap at Nellis AFB back in January in which a Royal Australian Air Force (RAAF) EA-18G Growler burst into flames and skidded off the runway. A RAAF investigation has concluded that one of the electronic warfare aircraft's General Electric F414 turbofan engines experienced an uncontained catastrophic failure. The explosion sent shards of the engine's fan blades ripping through the jet, which sparked off a fire that damaged the aircraft beyond repair. The incident occurred right before Red Flag—the USAF's largest air warfare exercise—was about to get underway.

ABC News in Australia reports that the investigation into the incident has wrapped up and was sent to the Chief of Air Force on July 30th, 2018. ABC's sources state that the loss of the Growler was the "most serious incident of its kind for the Australian Air Force in more than 25 years"—a remarkable claim if accurate.

The sources continue on, saying that the engine 'destroyed itself' and that the crew is to be commended for staying with the jet to avoid having it careen into rows of nearby aircraft. If the catastrophic engine failure happened just seconds later, the crew would have been committed to taking off and the fuel-laden aircraft would have blown up after flying uncontrolled into the ground following an ejection by its crew.

The ABC article describes the damage and how it occurred:

"The investigation has confirmed a high-pressure compressor in the Growler's engine had broken into three major pieces, with one segment piercing through the bottom of the jet and taking a chunk out of the runway.

Another piece of the compressor went sideways through the second engine causing severe damage, while the third piece went up and destroyed the right-hand tailfin before flying away and landing some distance from the jet.

As the jet came to a halt, the rear fuselage was engulfed in fire, the main undercarriage collapsed, and two of the three ALQ-99 electronic jammer pods it was carrying were severely damaged."

Supposedly, the Australian Defense Department is looking to be made whole financially for their loss now that the jet is deemed beyond economic repair. This will apparently be a convoluted process that may have questionable results. The claim would go through the U.S. Navy according to the ABC report and then on to Boeing who makes the Growler, and eventually to General Electric, who makes the F414 engine. It may even go beyond them to the supplier of the component of the engine that failed. One can see how this could potentially end up being a complex legal blame game that could take a long time to sort out.

The RAAF could replace the EA-18G with a new build aircraft or convert one of their F/A-18F Super Hornets from the second batch of 12 jets they ordered to Growler standard. These aircraft were built with the wiring already installed to do so for just this type of contingency and for potential capability reprioritization in the future.

What the report does not address, and unsurprisingly so, is that while Australia has two dozen Super Hornets and 11 Growlers, the U.S. Navy has hundreds of them. Is there a systemic issue with the powerplants on these aircraft? Even a small batch of them that contain faulty engine parts that could fail at any time could be a big deal for the Navy's already overstressed tactical fast-jet force, especially now that the Legacy Hornet is no longer going to be deployed by the Navy on cruises. The F/A-18A-D Hornet utilizes a close cousin of the F414, its progenitor the F404, that wouldn't be impacted by a potential grounding or fix order.

So far the Navy has been incredibly tight-lipped about all this, which is a bit concerning considering at face value such an issue could dramatically impact their fighter fleet. It also comes as accusations have been made against General Electric's primary competitor, Pratt and Whitney, that they have been knowingly selling faulty engines to the Pentagon.

According to a report by the Connecticut based Journal Inquirer, the supposed whistleblower claims the following:

Pratt “recklessly used inappropriate spray equipment and flawed test methodologies,” and deliberately manipulated test procedures in the manufacture of parts for the F119 engine used exclusively in the Pentagon’s F-22 Raptor fighter jet. Bonzani asserts that Pratt engaged in the “inappropriate” spray procedure specifically in applying the coating on the “knife edge seals used in the engine rotors.”

The flawed process resulted in engines supplied to the Air Force that are “at risk for premature wear and possible catastrophic failure, putting pilots and others at risk,” the lawsuit adds.

Apparently, the same person claimed similar processes were also used on the company's F100 series of fighter jet engines that power some USAF F-15s and F-16s, so they could also be impacted.

“There is absolutely no merit to these claims... We intend to defend this case aggressively.”

F-22s have had a number of known incidents that point to engine issues as of late, but the USAF has not commented on exactly what was the cause of these incidents as of yet. As for the Navy's General Electric F414 powered Super Hornets and Growlers, the last loss of one of these aircraft occurred last March when an F/A-18F was struggling to make it back to NAS Key West on one engine before diving into shallow water short of the field. Both crewmen died in that incident.

We'll have to see how all this pans and we are reaching out to the Navy for comment on this report.