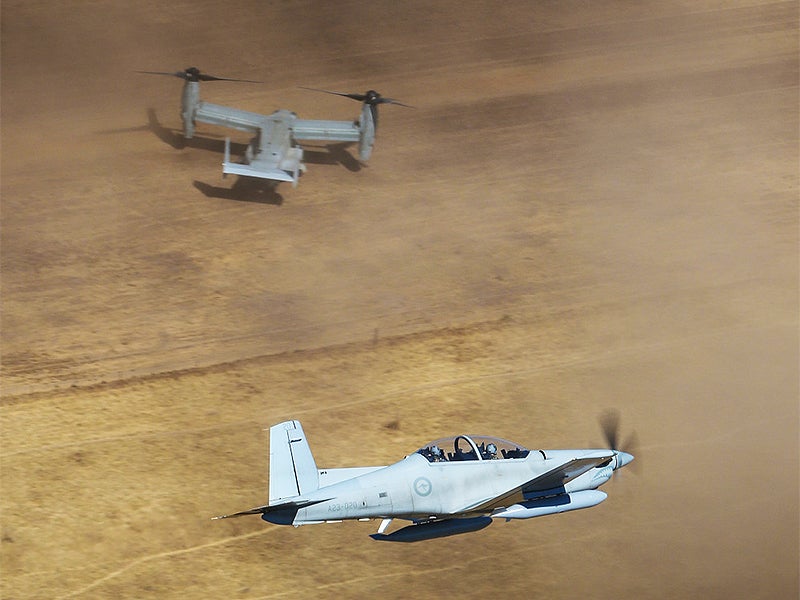 Australia's preeminent multi-national air warfare exercise Pitch Black is underway down under and this iteration has drawn a very diverse mix of participants. Everything from Indian Su-30MKI Flankers to USAF B-52H Stratofortresses are participating in the biennial large force employment (LFE) set of drills. The USMC, in particular, is participating in force, with MV-22s Ospreys being part of the aircraft roster. Based on photos just released by the Royal Australian Air Force, the Ospreys were escorted by RAAF PC-9 light air support turboprop aircraft during an insertion drill—a sign of what could come for the tilt-rotor community.

The images show a pair of PC-9 aircraft, which are primarily used for flight training and are a close cousin to the U.S. Air Force and Navy's T-6 Texan II trainers, escorting a Marine MV-22s into a landing zone. An earlier video from the exercise notes that the aircraft have been working in a Forward Air Control-Airborne (FAC-A) role as well. Forward Air Controllers work to rapidly organize and coordinate close air support for friendly troops. Putting them above the ground, and especially in an aircraft that can loiter low and slow, offers unique advantages, and can be the difference between life and death during air assault operations.

All this makes sense because the RAAF's storied No. 4 Squadron flies a handful of specially modified PC-9 aircraft that work to train Joint Terminal Attack Controllers (JTACs) which are essentially ground-based Forward Air Controllers, as well as airborne ones. The unit works closely with Australian special operations community as well and their aircraft include unique gray paint jobs, special radios, pylons to mount smoke grenades used for marking targets and other external stores, along with other modifications.

Integrating light air support aircraft with Osprey operations could very well become a staple in the future if the USAF does indeed acquire a fleet of light air support aircraft as it currently promises—something some of us have been begging them to do for years. These aircraft have similar operating speeds as the Osprey and can loiter over an area for prolonged periods of time providing overwatch, forward air control, communications relay, and light attack roles.

Even in the FAC-A and/or armed escort role, these aircraft could give Ospreys a huge amount of support. During multiple operations in lower-threat environments, most notably during operation in Africa, Ospreys and other transports have been shot up by ground fire during insertions and extractions of special operations forces.

The Tactical Recovery of Aircraft and Personnel, basically USMC lingo for Combat Search And Rescue (CSAR) for downed aircrews, that the Osprey is wonderfully adept at due to its speed, could make great use of this capability in particular. In addition, forward deploying light air support aircraft to support Ospreys is far easier and exponentially more economical than doing so with a fast jet fighter or A-10 squadron. Finally, the use of propeller-driven light attack aircraft for exactly this role dates back many decades, with the OV-10 Bronco providing a similar function for the USMC into the early 1990s.

For all that it is capable of, the $70M Osprey has limited ability to protect itself during missions into hot landing zones, with just a ramp-mounted machine gun being standard. Other solutions, like a remote-controlled minigun that drops out of the aircraft's belly aperture, have been deployed but have not really caught on for various reasons. Even arming Ospreys with laser-guided rockets to provide their own air support has been tested. But a cost-effective and far more effective solution like a light air support aircraft would be ideally suited for providing air cover for Marine and USAF Ospreys, along with other critical functions.

The USMC is also interested in procuring a similar aircraft at least for tactical training purposes as first, but as funds flow toward a light air support platform, the service could follow the USAF in making such an initiative a larger, front-line program of record. The Corps does have plans for a high-end vertical takeoff and landing drone in the works that could be armed and could provide air support, but that program is very ambitious, its entry into service is at least a decade away, and will take years to mature after that. In addition, the MUX program may be in trouble even at this early stage of its life.

But joint operations are what it's all about these days, especially for CSAR and similar collective mission sets. So there is no reason why USAF light attack aircraft couldn't work hand-in-hand with USMC Ospreys as well as the USAF's special operations optimized models.

With all this in mind, these images snapped during Pitch Black, and the tactics put to work during this particular evolution of the exercise, could very well be a progenitor of what's to come for the tilt-rotor community. Considering that U.S. Marine's are deployed to Australia on a semi-permanent basis now as part of Marine Rotational Force–Darwin (MRF-D), mastering the combined use of Osprey and light attack aircraft may very well occur down under with the help of No. 4 Squadron regardless of how long the Pentagon drags its feet on buying its own fleet of light air support aircraft.

Pitch Black has grown in complexity and size with each iteration in an effort that seems to match the RAAF's goal to seriously up their game when it comes to all aspects of air warfare. It also has become an event where a diverse set of regional players can unite and train to fight together. Something that is becoming more important as China increasingly throws its military might around the hemisphere.

140 aircraft and 4,000 personnel are taking part in Pitch Black 2018, which is primarily held out of RAAF Base Darwin and RAAF Base Tindal. You can see the full list of the flying participants and their aircraft below:

The exercise will be wrapping up Friday, August 17th, after three weeks of combined forces drills.