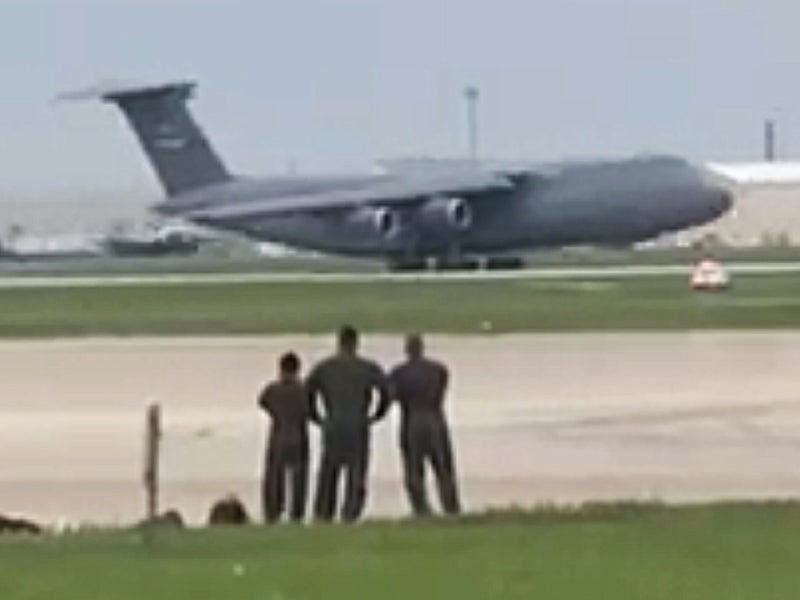 The C-5 is a flying warehouse of an aircraft, but with all its lifting capacity comes high complexity and the type is certainly known for its fair share of chronic issues. On a week when the last upgraded C-5M was announced delivered, a video showing a Galaxy making an incredibly well-flown nose gear up landing at Lackland AFB in San Antonio, Texas has come to light.

Here's a direct link to the Facebook video in case it doesn't show up automatically below on your mobile device:

It's not clear if the video, which was first posted on John Q. Public's Facebook page, was shot recently or on March 15th, 2018 when a known nose gear up landing by as C-5 occurred at the base, but the latter is probably the case. Nobody was hurt in that incident and the aircraft was deemed repairable, but it marked another in a very long line of issues with Galaxy's troublesome landing gear which has included many emergency landings. In the Summer of 2017, two C-5s from Dover Air Force Base had similar issues in Rota, Spain which resulted in the grounding of the USAF's truncated force of just 56 C-5s.

During the grounding, it was discovered that the ball-screw assembly was malfunctioning and causing issues with the nose gear's extension and retraction process. The entire fleet received new ball-screw assemblies but it seems that didn't necessarily cure the C-5's nose gear woes.

But that's not too surprising. The C-5's long history of landing gear issues includes the aircraft's issues to rise again after its nose gear 'kneels' to accept cargo through the jet's giant tilting nosecone door. I have had more than one C-5 crewmen tell me that the chances of the jet's nose gear lifting as advertised basically a coin toss. This is in addition to the myriad of other issues that impact the aircraft's reliability, many of which were supposed to be solved by the C-5M upgrade, although large increases in availability have not materialized as expected.

Regardless of the details surrounding this nose gear up landing, the crew did an amazing job of keeping the nose off the ground as long as possible and thus keeping the jet, the surrounding infrastructure and their own souls intact. You can read all about what it is like to pilot the C-5 in this past feature of mine.

We are reaching out to Lackland AFB for comment and will update this post when we find out any more information about the video.