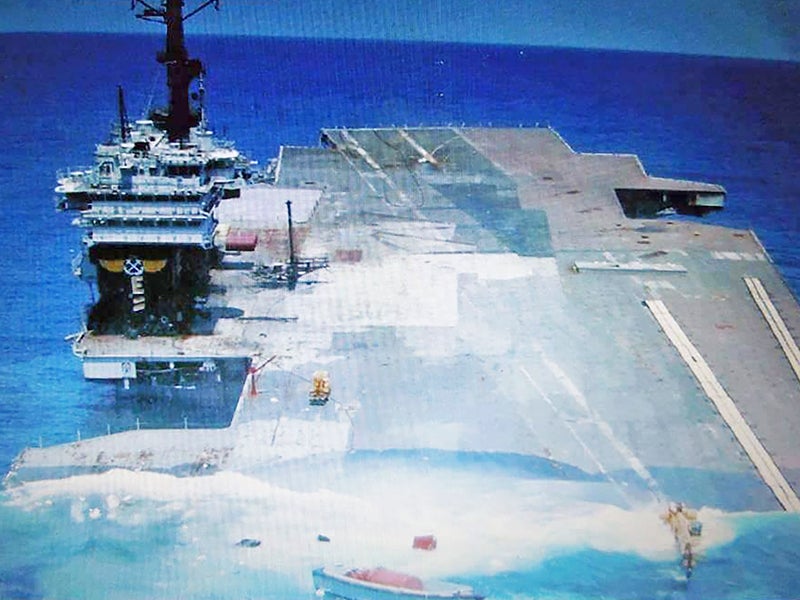 Supercarriers are the ultimate form of American power projection and remain a capability no other Navy on the planet possesses. They are the most expensive ships—let alone weapons—on the planet. In the coming decade, a single Ford class supercarrier, the successor of the venerable Nimitz class, will cost nearly the entire annual defense budget of Canada, and this doesn't include the billions worth of aircraft deployed as part of the ship's air wing. But what's really irreplaceable are the close to 6,000 souls that call the ship home while underway.

With all this in mind, it's hard to imagine one of these national treasures being sunk in combat, although Hollywood has played with the idea from time to time. But quite frankly, it is a real possibility, especially now, when peer-state foes are on the rise and anti-surface warfare is becoming a far more complex and deadly affair—one full of new low and high-end threats.

Those tasked with designing and building these leviathans of the sea have to take this reality into account and, at the very least, do what can be done to improve the survivability of the ship and its crew if the nearly unthinkable should become reality.

As the Navy looked towards the future of its carrier fleet in the 2000s, it set out to design a new class of supercarrier. But in order to make it more survivable, they needed data on what the actual effects of certain types of weapons and their resulting damage was on one of these huge fighting ships. The problem was that since USS Forestall's (CV-59) appearance on the high seas in the 1950s, an American supercarrier had never been sunk. Data was largely simulated and based on the sinking of older, smaller aircraft carriers and surface combatants that didn't really represent the unique attributes of a supercarrier.

Spurred by the wind-down of the Cold War, America's conventionally powered carriers were drawn out of service in the 1990s and 2000s. Although some organizations tried to acquire these ships as museums, they ended up proving to be too large and expensive to convey and sustain and were sold off for scrapping. Just USS John F. Kennedy (CV-67), which is in somewhat of a class of her own, is still being held for donation. Recently, USS Kitty Hawk (CV-63) was being eyed for refurbishment and return to service to help fulfill the Navy's 355 ship inventory goal, but this plan has been passed over, likely for valid reasons.

But one of these mothballed supercarriers, USS America (CV-66), was spared the scrapper's torch in exchange for Davy Jones' Locker. The Kitty Hawk class carrier that had ended its active service life in 1996 would act as a destructive test platform so that the Navy could gain new insights into how a supercarrier would soak-up different forms of attack. Those lessons would then be applied directly to the Nimitz class successor supercarrier program.

It was a noble but morbid cause for the storied ship.

Still, there was opposition. The idea that a ship named USS America would be sunk on purpose angered some including veterans who served aboard her. The ship had been part of so many important moments in American history—taking part in Vietnam and Persian Gulf Wars, and in combat operations over Libya, along with many other notable missions—and tens of thousands of sailors called the vessel home during her comparatively short 31 year operational career.

Still, the Navy was adamant about using the ship for this one final purpose. In 2005, then Vice Chief of Naval Operations Admiral John Nathman explained the Navy's reasoning:

"America will make one final and vital contribution to our national defense, this time as a live-fire test and evaluation platform. America's legacy will serve as a footprint in the design of future carriers—ships that will protect the sons, daughters, grandchildren and great-grandchildren of America veterans. We will conduct a variety of comprehensive tests above and below the waterline collecting data for use by naval architects and engineers in creating the nation's future carrier fleet.

It is essential we make those ships as highly survivable as possible.

When that mission is complete, the America will slip quietly beneath the sea. I know America has a very special place in your hearts, not only for the name, but also for your service aboard her. I ask that you understand why we selected this ship for this one last crucial mission and make note of the critical nature of her final service."

After being prepared for a SINKEX operation, on April 19th, 2005, the ex-USS America was towed hundreds of miles off the Virginia coast. Soon after taking up station, the onslaught began. The ship was pummeled by explosions both above and below the waterline. After nearly four weeks of these activities, the carrier was scuttled. On May 14th, 2005, the vessel's stern disappeared below the waterline and the ship began its voyage to the seafloor.

The image came to my attention when one of our most esteemed commenters and veteran S-3 Viking sensor operator, AncientSubHuntr, posted it in our discussion section. It shows the carrier's bow deeply buried below the waterline, with waves coming up to the middle of the ship. But amazingly, beyond that, the tough ship looks well intact. Regardless, this is a haunting image that one can hope never gets repeated during an operational cruise, although some of America's foes clearly wish otherwise.

The exact location of the ship, which at the time of its sinking was said to be roughly 300 miles off Virginia, was actually quite a bit further out according to this interesting article about its final resting place. The depth it rests at is also quite telling—nearly 17,000 feet down. Clearly, the Navy didn't want anyone nosing around the hulk after it sunk.

The results of this mother of SINKEX drills remain classified, as do any other pictures or video of the operation. Hopefully, the exercise did help inform the design of USS Gerald R. Ford (CVN-78) and its successors. The closest thing to a test like this that the Navy's new class of carriers will see will be shock trials, but the Navy has pushed to delay this critical series of tests possibly until the second Ford class supercarrier, USS John F. Kennedy (CVN-79) is plowing the seas. By that time, the third ship in the class, USS Enterprise (CVN-80) will already be deep in construction. And this is nothing compared to a SINKEX, as shock trials are used to see how critical components react to a nearby concussive blast and are not highly destructive in nature.

But regardless, considering America stood up to four weeks of abuse and only succumbed to the sea after demolition teams scuttled the ship on purpose once and for all, it's clear that America was built to sustain heavy damage in combat and still stay afloat. The big question now is do they still make 'em like they use to?

As for the USS America name, a new vessel sails with it today, the amphibious assault ship USS America (LHA-6) of the America class, which is already in its second design iteration.

It's unlikely that another SINKEX of this magnitude will occur anytime in the foreseeable future. America's nuclear supercarriers are far more challenging and expensive to dispose of compared to their conventionally powered predecessors. Scrapping USS Enterprise (CVN-65), America's first nuclear supercarrier, is slated to take a decade and a half and cost a whopping $1.5B. Making one of these ships environmentally suitable for sinking would likely cost far more money and that's if it's even really feasible at all.

A wider angle of the image was posted on Facebook in one of the groups I follow. It shows the bow totally submerged. Supposedly it hangs somewhere in the Pentagon:

The ship's deck was bowed downward around the landing area and large holes were punctured in the deck around the forward catapults. Supposedly, the ship's hull had massive fissures in it and the hangar deck was obliterated by the time it was ready to be scuttled.

In addition, we have found out from another source that the carrier's hangar bay was packed with ex-Ohio Air National Guard A-7Ds that had been sent to Aberdeen Proving Ground. They were barged over to the carrier and loaded aboard before it headed out to the target area. So one of the goals of the operation was to see how aircraft reacted to explosions inside the ship's hangar bay.

We can't thank everyone enough for helping provide new information about this intriguing story and for sharing their personal experiences of their time aboard this iconic ship. Please keep them coming!