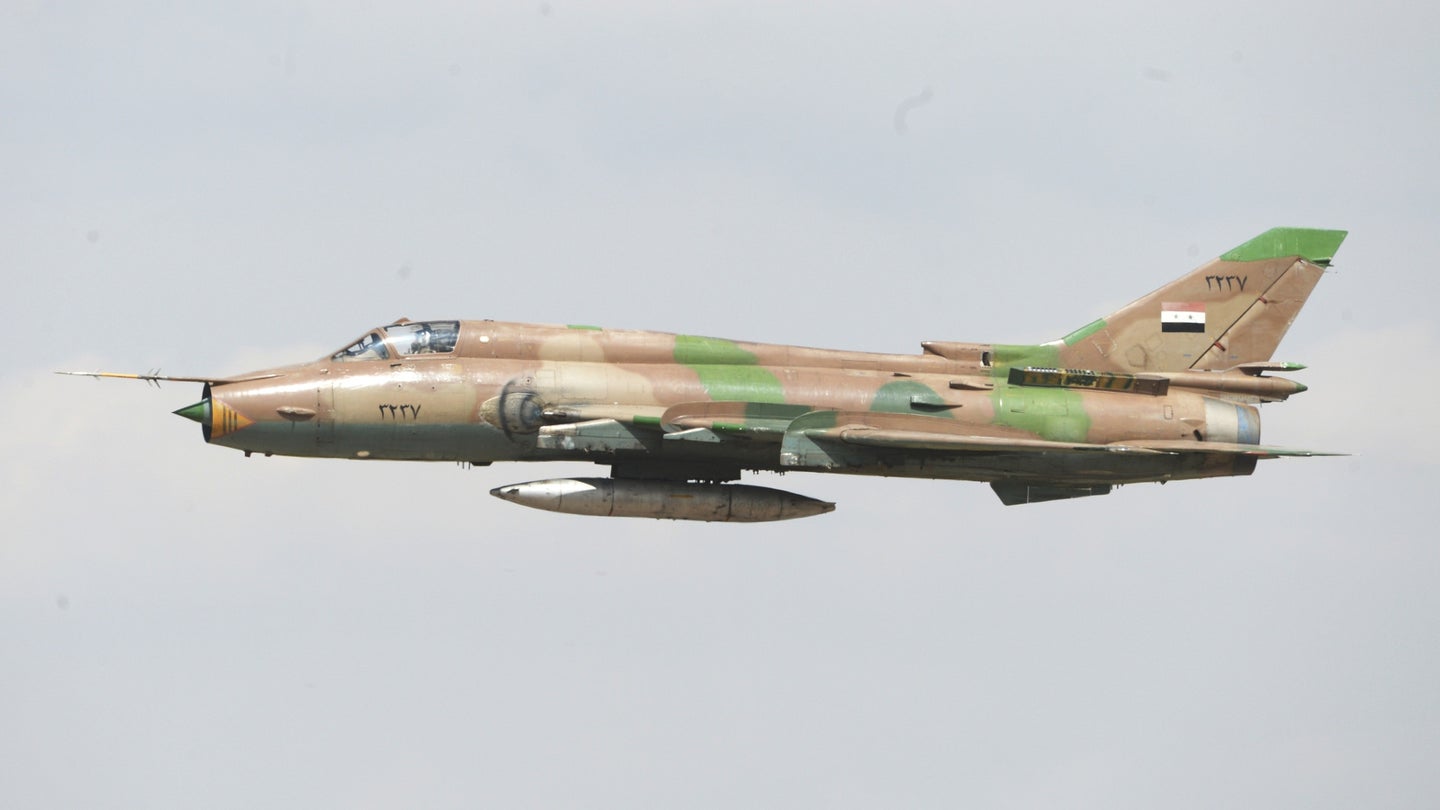 Israel says shot down a Syrian Su-22 Fitter combat jet with a pair of Patriot surface-to-air missiles, the latest in a series of intercepts along the two countries’ shared border. This follows the recent first-ever use of the David’s Sling missile defense system, which failed to knock down some of Syria’s OTR-21 Tochka quasi-ballistic missiles due to a technical fault, and the Israeli government’s reported rejection of a Russian-brokered deal to try to stabilize the situation.

The Israel Defense Forces (IDF) said in a statement that they observed the Syrian aircraft, identified initially only as a Russian-made Sukhoi, heading toward the border at high speed on July 24, 2018. They intercepted it after it flew more than a mile into Israeli territory. On July 23, 2018, the Israelis had similarly attempted to destroy the Tockhas after they detected the missiles flying in the direction of areas it controls in the Golan Heights region.

“Since morning hours [on July 24, 2018], there has been an increase in the internal fighting in Syria, including an increase in the activity of the Syrian Air Force,” the IDF subsequently explained. “During the day, we identified increased aerial activity in the Quneitra area and in the southern Syrian Golan and sent messages through several channels and in several languages about Israel's security interests.”

This is actually not the first time Israel's Patriots have brought down a Su-24 [See update at the end of the story] near the Golan. In 2014, the IDF shot down another Fencer after it reportedly flew less than a half of a mile into Israeli airspace.

According to Israel’s Ynet news, in this instance, Israeli officials reached out to their Russian counterparts in Syria to confirm that it wasn’t one of their aircraft. The two countries reportedly operate a “hotline” system of some kind, similar to the often dubious de-confliction arrangement the United States and Russia maintain in eastern Syria.

The fate of the pilot or pilots in the Syrian aircraft remains unclear. Syrian officials, through the countries state-run SANA media outlet, said the Su-24 was conducting operations against rebels along the border and denied it crossed the border.

The Syrian Arab Air Force has just a few of the Fencers and there are among the country's most capable combat jets. These factors, combined with its difficulties in keeping military aircraft operational and its resources required to train qualified pilots, mean the loss of the one jet could have an outsized impact on the service's ability to conduct operations. [See update at the end of the story]

In addition, Syria’s own claim that the plane was flying missions against rebel forces near the edge of the Yarmouk River Valley, which effectively forms its boundary with the Israeli occupied Golan, as well as Jordan, highlights the potential for mistakes and miscalculations on both sides. It already appears to be increasingly difficult to separate the fighting in southern Syria from potential strikes aimed at Israel.

In the case of the Tochkas, Israeli officials had to concede that they were not actually heading for targets in Israel. After it became clear that the missiles were not going to cross the border, IDF self-destructed one of the interceptors over Israeli territory.

The second interceptor did not respond to commands to blow itself up. The IDF is now attempting to determine whether or not it actually intercepted one of the Syrian missiles, or if it fell into Syria, or did actually explode as directed.

The video below shows a test of the David's Sling system in the United States.

These incidents are only the most recent cross-border skirmishes, which have been of varying severity. The most significant was a burst of rocket fire from Iranian forces in Syria into Israel in May 2018, which prompted a massive Israeli counterattack. Earlier in July 2018, after a Syrian drone crossed the border, the IDF struck three sites under the control of Bashar Al Assad’s government in response.

On July 23, 2018, Israel also appeared to be signaling to someone within Syria about its continued willingness and capability to respond to any threats emanating from the country by flying an advanced F-35I Adir stealth fighter near the border with a transponder turned on. Airplane spotters watched the jet flying routes in northern Israel using online flight tracking software.

In May 2018, the Israeli Air Force revealed that it had sent these aircraft into combat for the first time. It also employed various types of F-15 combat jets and F-16I Sufa multi-role fighter jets, as well as ground-launched rockets and missiles, to conduct strikes in Syria.

But the recent spike in these interceptions and retaliatory strikes appears to be primarily linked to Assad’s latest offensive in southern Syria, which began in earnest in June 2018. Since then, with the help of Russia and Iran, as well as proxy forces those countries support, the government in Damascus has been steadily regaining control of much of the region. After the jet went down on July 24, 2018, Syria said it was encircling the city of Saida, which sits less than 10 miles from the Jordanian border.

Israel and Russia had reportedly been trying to come to an agreement to reduce the growing tensions, including a plan that could have moved Iranian personnel and militias under their direction out of a more than 60-mile wide buffer zone along the border. But on July 23, 2018, Israeli Prime Minister Benjamin Netanyahu rejected that offer, according to Reuters.

“We will not allow the Iranians to establish themselves even 100 kilometers [approximately 62 miles] from the border,” Netanyahu reportedly said during a meeting with Russian Foreign Minister Sergei Lavrov. “This was a very important meeting at a significant time, during which we delved into many details, produced maps and shared intelligence, and explained in great detail our policy,” an unnamed senior Israeli official said, according to a seperate report from The Times of Israel.

While we don’t know why the deal, which has been in the works for weeks now, apparently collapsed, it has never been clear how the Russians expected to be able to order Iranian forces to leave the area. It is possible that Israel was equally concerned about the viability of the Kremlin as a guarantor of any such agreement, especially in light of its recent abrogation of a previous de-escalation zone arrangement with the United States and Jordan that had kept southern Syria under de facto rebel control for nearly a year.

Beyond that, despite previous pressure from the Russians on the issue, Assad appears to have no intent on scaling back ties with the regime in Tehran or Iranian-backed proxies in the region, including the Lebanese militant group Hezbollah, which Israel also sees as a direct threat. The IDF has already struck Syrian targets on many occasions, actions that appeared to be linked to blocking arms shipments bound for Hezbollah and other terrorist groups. Israeli officials have repeatedly declared that they find Iran’s growing influence in Syria and elsewhere in the Middle East to be unacceptable to their interests.

Perhaps more importantly, Israel and Syria could be on a collision course over issues entirely separate from Iran. The two countries remain effectively in a state of war and dispute the status of the Golan Heights.

In 1974, they agreed to establish a U.N.-enforced demilitarized zone in that region to separate their forces and reduce the likelihood of renewed conflict. Israel now accuses Syria of exploiting the chaotic situation and violating that deal by moving forces into the buffer area. In its statement about shooting down the Syrian jet, the IDF specifically references the international agreement, implying that they might have shot down the plane simply for zipping through this restricted zone.

Since 2016, Israel has itself been working right along the edge of Syria, and even within the country itself, providing medical and other humanitarian aid as part of what it calls Operation Good Neighbor. Most recently, as part of that mission, the IDF escorted members of the White Helmets volunteer civil defense organization and their families through the Golan and into Jordan to safety. Other countries have since offered asylum to these individuals, who have worked to save lives in the face of indiscriminate Syrian and Russian military operations, especially aerial bombing campaigns.

This all further calls into question how inclined Israel might be at present to entertain any deal that involves Assad’s regime, even with the support of the Kremlin. The evacuation drew fierce criticism from both Syria and Russia.

The government in Damascus, along with Russian officials, has long accused the White Helmets of being a front for terrorists and of staging false flag chemical weapon attacks, unsubstantiated conspiratorial claims that are widely repeated worldwide and are often coupled with false, misleading, or otherwise manipulated information and imagery.

It had already been clear that a failed Israeli-Russian border deal could leave the region open to the increased risk of a multi-faceted conflict, with Assad trying to use his southern Syrian offensive as a springboard to advance other, long-standing regional goals. He could seek to manipulate both his Russian and Iranian benefactors, exploiting their growing animosity toward one and other, in service of this broader strategy.

The IDF's recent involvement directly in the Syrian civil war points to a similar potential outcome arising simply the failure of Israel and Russia to work out a deal in the first place, which would remove any incentive for Assad to pull back Iran’s forces and stop his own harassment of Israel at all. Iranian-backed militias are supporting his southern campaign in the meantime.

There was the possibility that U.S. President Donald Trump and Russian President Vladimir Putin could have bolstered such a deal, or otherwise helped facilitate it, with an agreement during their recent summit in Helsinki, Finland. However, the backlash to that meeting, both inside the United States and among many of America’s allies and partners, make it unlikely that any such arrangement will come into force in the near future.

The U.S. government, including the U.S. military, is reportedly still struggling to determine what Trump and Putin did and didn’t agree to, including regarding cooperation around the conflict in Syria. The two leaders did apparently discuss potentially repatriating Syrian refugees, despite concerns that many of them could face detention, torture, or worse from the Assad regime for deserting from national service or suspected links to rebel forces.

“You don’t just go do things,” U.S. Army General Joseph Votel, the top commander for all U.S. operations in the Middle East and Central Asia, told reporters on July 22, 2018, insisting he had received no word from the White House on any plans for Syria. “I have not asked for that. I am not recommending that. And that would be a pretty big step at this point.”

At the same time, Trump seems to remain determined to extricate the United States from the conflict in Syria by any means available. If the United States does end up cooperating with Russia or otherwise draws down its involvement without clear guarantees about the status of various groups and regions, it could easily end up leaving the door open to renewed fighting or new complex conflicts between various nation-states and non-state actors with competing agendas.

As the latest aerial intercepts near the Israeli border show, it might not even take a direct attack by any group inside Syria on Israel to risk touching off a broader conflict between those particular countries.

Subsequent reports, including images of the wreckage, suggest that the aircraft the IDF shot down was a Su-22 Fitter ground attack aircraft rather than a Su-24.  The source for the original information was the Israeli Air Force.