USAF Offers New Details About New Air Force Ones, But Doesn't Back Up Trump's Cost-Cutting Claims

A formal justification of the deal with Boeing cites the president's personal intervention in the program, but doesn't say he saved any money. 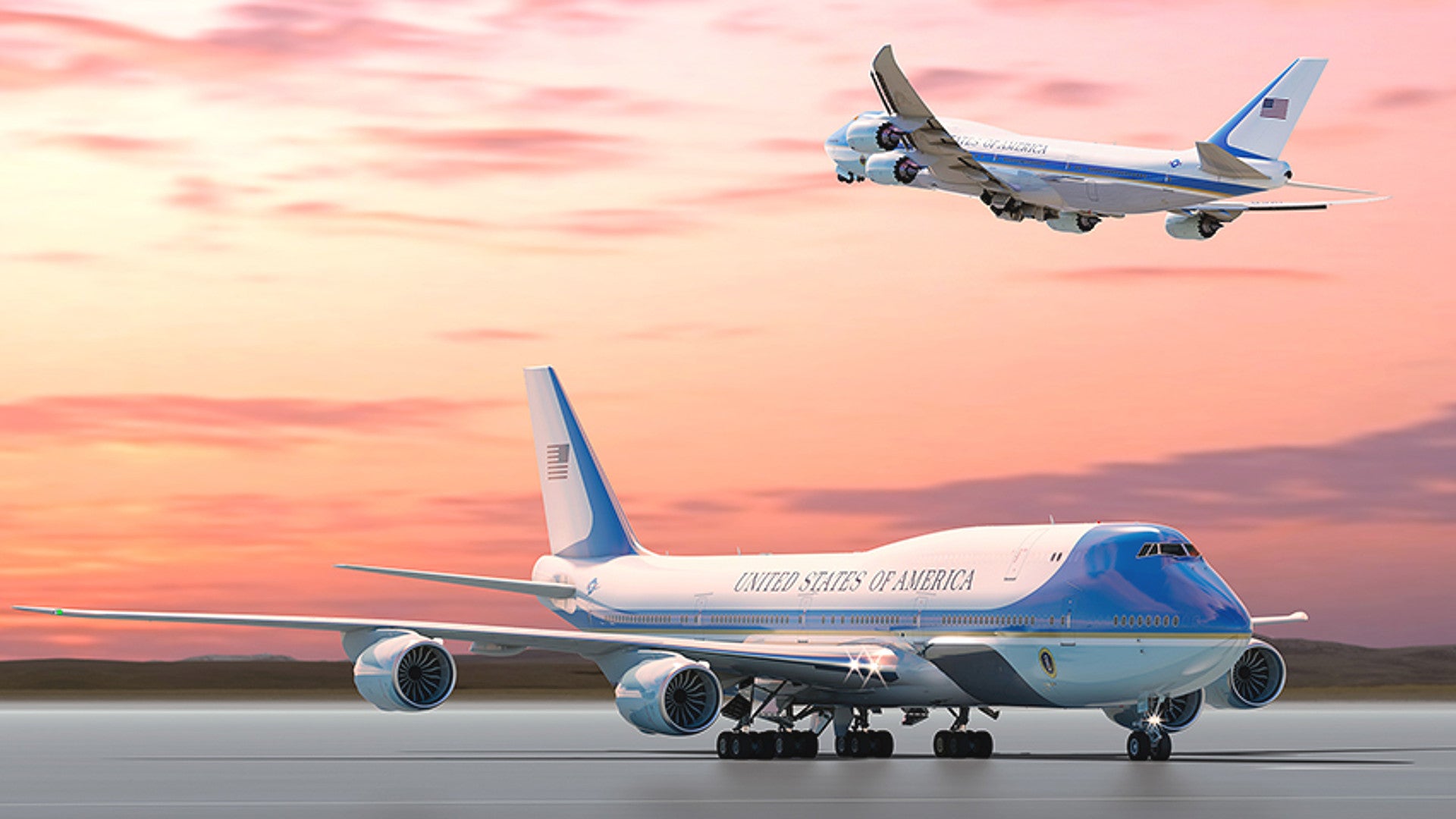 Air Force Material Command, which is overseeing what is formally called the Presidential Aircraft Recapitalization program, released the updated “justification and approval” document on July 20, 2018 on the U.S. government's main contracting website, FedBizOpps. In 2015, the service first announced it would formally give Boeing the deal to design and build the two future Air Force One aircraft, now known as VC-25Bs, without holding an open competition.

The revision is necessary “in order to execute the informal agreement dated 20 February 2018 made between President Donald J. Trump and Mr. Dennis Muilenburg, the Chairman, President, and CEO of The Boeing Company,” the new document explained. The Air Force is treating the changes as a modification to the existing sole-source contract.

Any time an arm of the U.S. government wants to award a contract to one specific firm without opening it up to competing bids, the entity in question has to submit a formal statement justifying why it is the only practical way to proceed. Typically, these arguments focus heavily on the contractor’s past performance and unique ability to perform whatever the work is, as well as how those factors combine to give the American taxpayer the best possible deal. There is usually some explanation about how the time it would take to find another suitable company would cause an unacceptable delay that would either cost more money, potentially result in sub-par work, put lives at risk, or some combination thereof.

For example, the Air Force's written justification for the Presidential Aircraft Recapitalization program notes that the existing pair VC-25A aircraft will have a concurrent availability rate through 2025 of just 28 percent, meaning the planes will both be mission ready less than one-third of the time, on average. The two VC-25Bs will have an expected availability rate across their life cycle of around 56 percent, better-ensuring one is always to provide important executive transport services to the President, his closest advisors, and family.

Similarly, the Air Force said it would be more expensive to continue operating the essentially custom-built older aircraft and modify them as necessary than it would be to sustain the newer planes, which will have various advanced features to begin with. It is worth noting that in a previous Air Force-driven effort to save money, the service made the decision that the VC-25Bs will be conversions of a pair of existing commercial 747-8i aircraft, which Boeing built for a privately-held Russian airline that went bankrupt before it could take delivery of the planes, rather than built them from the ground up as Air Force Ones.

But, given the written justification's emphasis on cost, it’s notable that the document makes no mention of the purported $1.5 billion Trump said he cut from the program by negotiating personally with Muilenburg in February 2018. The White House said the president did this somehow without having any impact on the estimated total cost of the project, a discrepancy we at The War Zone called into question at the time.

There is only one actual cost-savings estimate in the document, which is dated May 2018, which explains that sole-sourcing the deal to Boeing could trim approximately $200 million from the program cost by having the company handle certification processes internally and letting subcontractors bid on various systems integration efforts. This exact same language was also present in Air Force’s original argument, which it released publicly in 2015.

The justification document does confirm that Trump and Muilenburg “reached an informal agreement on ‘the total [VC~25B] program price’ on 20 February 2018,” but conveniently does not offer an actual figure. Elsewhere in the document, the Air Force once again confirmed the that well established estimated cost of the program is approximately $3.9 billion, a figure that we at The War Zone have explained in detail before has been relatively stable since at least 2015.

It seems difficult to believe that the Air Force would not have devoted at least one sentence to a savings of $1.5 billion. It seems even more difficult to see how the service could have omitted this if it were true given that the entire reason this new version of the document exists at all is to reflect the outcome of the Trump-Muilenburg deal.

The updated document does say that the Air Force successfully negotiated special licensing rights to the VC-25B design that will allow it to put the contractor logistical support contract up for competitive bid in the future. This could potentially reduce costs if another firm underbids Boeing for this deal.

During negotiations, Boeing also offered eight additional years of warranty on any commercial 747 components that remain on the aircraft. The extended warranty deal could help the U.S. government save money in the future on basic preventive maintenance and replacing simple parts. Still, it is unclear just how much will actually remain common between the 747-8i and the VC-25B when the conventions are complete.

There is a slim possibility that Trump could have been referencing estimated savings across the life cycle of the new Air Force Ones. If this is the case, we still can’t assess their accuracy since the Air Force has not given an estimate of how much it has or expects to save from these negotiated terms or other cost-cutting initiatives. In addition, there is no indication that the president’s personal intervention rather than existing arrangements between the service and Boeing resulted in any concessions.

In fact, the Air Force’s argument in favor of giving the Air Force One deal to Boeing is relatively straightforward. Its core line of reasoning is that the company was responsible for the existing pair of VC-25As and has a unique understanding of the requirements for such an aircraft. In addition, since the service has insisted on sticking with a derivative of the 747 airliner as the basis for the new VC-25B, the Chicago-headquartered planemaker is likely to be able to save additional time and money given its existing and extensive experience modifying that airframe to the presidential airlift mission.

Beyond that, “Boeing declined to sell or otherwise provide the United States Government or other contractors the license rights needed to conduct an adequate competition while avoiding a substantial duplication of costs or unacceptable delays,” the document noted. “Furthermore, prior to initial contract award, Boeing declined to provide additional engineering services in lieu of data rights.”

With all this in mind, the Air Force provided five examples where Boeing alone would be able to perform the necessary modifications to the 747-8i aircraft at the best possible value. These details, in turn, offer some new information on the exact configuration of the aircraft.

For one, the VC-25Bs will need a military GPS that works seamlessly with the aircraft’s mission systems. Boeing will also replace the commercial transponder with an Identification Friend or Foe (IFF) system. Together these systems will allow the future Air Force Ones to navigate both commercial and restricted airspace, using civilian navigation and air traffic control data when available and appropriate. It seems almost certain that the navigation system will also have special features to harden it against jamming and other electromagnetic interference.

The new presidential aircraft will also feature a pair of auxiliary power units, or APUs, as is the case on VC-25As, than a single unit as found on the standard 747-8i. This will provide the necessary power to run the jet’s much more expansive communications and other missions systems on the ground without the need for an external power source, as well as providing backup power in the air. There will also be specialized, but unspecified modifications to the “environmental controls, electrical power, water management, fuel system, and engines,” which Boeing is best suited to perform, according to the justification notice.

The last specific example of specialized features that will go onto the VC-25B is the need for two new entry and exit doors, one forward of the wing and one behind it. These would allow the passengers and crew to enter or depart the plane even at airports or other sites where there might be limited infrastructure to handle such a large aircraft.

This feature could be necessary if Air Force One has to transport the president to a meeting or other event in a certain location without facilities to handle a 747-airliner or during an emergency that requires Air Force One to operate from a remote or austere landing strip for safety or convenience. The two doors also allow staff, the White House press corps, and other individuals traveling onboard to rapidly board and deplane without having to use the same entryway as the president.

Having the ability to get people on and off the aircraft can also just come in handy if there is a dispute on the ground over the ability of a more conventional airstair. The present VC-25As already have these doorways for exactly this reason.

It’s these kinds of changes and additions, most of which remain classified or otherwise highly sensitive, that lead to the high price tag associated with Air Force One. We know this has to include an especially elaborate suite of self-defense systems, hardening against the electromagnetic pulse of a nuclear weapon going off, secure communications equipment, and more. Boeing has done the integration work for all that on VC-25A. As the justification notes, the VC-25Bs will have a “no fail mission.”

That’s not to say that there can’t be feature creep, higher than expected costs as of the result of unnecessary systems, and features the U.S. government could cut or scale back to save money. In May 2018, the Air Force just canceled a $24 million contract to upgrade the refrigerators on the existing VC-25As after criticism from members of Congress.

"Even with the understanding that the Air Force One mission brings with it unique requirements and challenges, a $24-million sole-source contract just didn’t pass the smell test," Joe Courtney, a Democratic Representative from Connecticut and the ranking member on the House Armed Services Committee’s Seapower and Projection Forces subcommittee, said in a statement at the time. "I commend the Air Force for reversing this decision and look forward to working with them to ensure the next-generation Air Force One program stays on schedule.”

But, so far, there continues to be no evidence that the cost of the Presidential Aircraft Recapitalization program has ever been anything but approximately $4 billion or that Trump’s handshake deal with Boeing netted significant additional savings in the upfront development and procurement costs or long-term sustainment expenses. In its latest justification of its contracting processes in relation to the project, the Air Force does not even imply otherwise.

And with Trump now saying he wants a new and potentially more complex paint scheme for the jets, as well as other luxury features, he may ultimately end up adding to the price tag.