The planes are likely headed to the Philippines, but they might only be a stopgap until A-29 Super Tucanos replace the OV-10s for good. 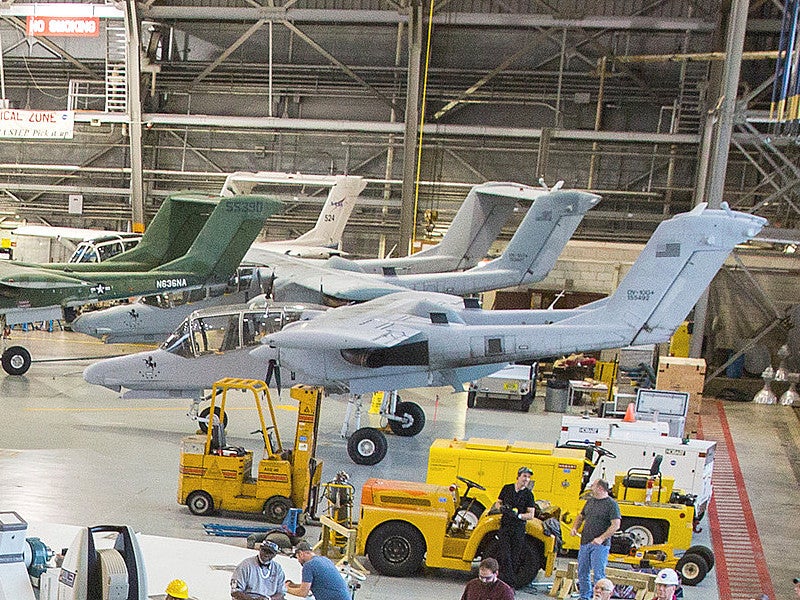 The U.S. Air Force is expecting to facilitate the delivery of four OV-10 Bronco light attack aircraft to an unspecified American partner overseas. This could very well be the Philippines, which is the last military user of the type anywhere in the world, and might reflect a shrinking number of government operators of any type worldwide rather than any serious revival of interest in its capabilities.

On July 19, 2018, the Proven Aircraft Program Office at Hill Air Force Base, a division of the U.S. Air Force Life Cycle Management Center, announced it could potentially hire a contractor to crate up two OV-10A and two OV-10G+ variants and deliver them to a location overseas. The same firm would then reassemble the planes once they arrive where ever it is that they might be going. Jane's Aviation Editor Gareth Jennings was among the first to spot the notice.

Of particular note, the “two G+ models had over five thousand (5,000) new wires installed during last upgrade without disconnects,” according to the notice that appeared on the U.S. government’s main contracting website, FedBizOpps. “All wiring needs to be pulled back and stored in the fuselage to avoid cutting the wires.”

Otherwise, whoever the Air Force might hire simply has to break the Broncos down into their fuselages, wings, nacelles and booms, sponsons, and horizontal stabilizer components for shipment. They would have to custom-build the crates to hold these components, as well.

The announcement does not say where the aircraft are coming from, but it seems almost certain that they are, or were until very recently, the property of the National Aeronautics and Space Administration (NASA). An official, publicly available inventory of planes and helicopters the Air Force has in storage at the main U.S. military boneyard at Davis-Monthan Air Force Base in Arizona does not list any OV-10s of any type.

NASA, however, has two OV-10A Broncos and, more importantly, the only two OV-10G+ aircraft in existence. It acquired these planes from the U.S. State Department after they passed through the hands of various U.S. government agencies after the U.S. Marine Corps retired them from combat duty in the 1990s.

As part of NASA, the four aircraft subsequently helped study low-speed flight, noise, and other aeronautic effects. Selling these aircraft to a foreign government would effectively end the organization's Bronco operations with little likelihood that it would ever acquire additional examples of the type in the future.

It’s not clear what, if any, modifications the planes might receive before delivery, either. Both the OV-10As and OV-10G+s are demilitarized in many ways at present and could require some level of work to bring them back to a combat-capable configuration.

This might not be difficult to do in the case of either variant, given the design’s relative simplicity and the extensive work the U.S. Navy already did to the G+ versions as part of a deal that also involved NASA and U.S. Special Operations Command (SOCOM). These heavily modified aircraft, which you can read about in detail here and here, subsequently went to Iraq in 2015 for what became a highly successful combat evaluation supporting American-led operations against ISIS terrorists.

As of July 2016, the aircraft were back in NASA custody. Per the agreement with the Navy and SOCOM, U.S. military personnel or contractors removed weapons and the ability to employ them, as well as a host of other military equipment, before returning them.

And while we don’t know what country is in line to potentially get the Broncos, the Philippines seems to be the most likely recipient. It's hard to imagine that another country with no actual or recent experience with the type would decide to acquire such a small number of these aircraft now, especially given the increasingly limited availability of support services for the type.

The Philippine Air Force presently has a fleet of eight upgraded OV-10M aircraft. It is possible that they would bring the ex-NASA OV-10As to this configuration or use them as a source of spare parts for these existing aircraft.

The OV-10G+s, on the other hand, could add new capabilities to the Filipino Bronco fleet. Thanks to their U.S. military-sponsored modifications, these aircraft have all-new glass cockpits, provisions for a modern sensor turret with electro-optical and infrared cameras and the space for the necessary systems to give them the ability to employ precision-guided munitions.

When SOCOM operated the aircraft, they also had support for helmet-mounted displays, a special-purpose geo-location system to home in on enemy radio and cell-phone transmissions, as well as additional communications systems and data links. Some of this mission equipment could go back into the aircraft before they head off to the Philippines.

The Philippine Air Force’s existing OV-10Ms do not have anything approaching these capabilities. During brutal fighting against Maute and Abu Sayyaf militants, who had pledged allegiance to ISIS, in the city of Marawi in 2017, these aircraft had to conduct attacks with unguided bombs. This posed an inherent risk of collateral damage and civilian casualties in the dense urban environment.

By contrast, during their time in Iraq, the OV-10G+ aircraft exclusively employed the low-cost, laser-guided Advanced Precision Kill Weapon System II (APKWS II) 70mm rocket. Unfortunately, official NASA pictures show that the planes, as of at least as of February 2018, no longer have their MX-15HD electro-optical turrets installed, indicating that it may require some amount of work to restore this and other more advanced capabilities.

But if the Broncos do end up going to the Philippines, it’s still not entirely clear how much longer the country intends to operate them. The aircraft has been out of production since 1986 and it has only become increasingly difficult to sustain the type as the total number of operators around the world continues to contract. North American Rockwell only ever built approximately 360 of the aircraft in total.

If NASA stops flying the OV-10, the only remaining government organization using the type in capacity in the United States will be the California Department of Forestry and Fire Protection, or CALFIRE. This organization uses the aircraft to direct water bombers during forest firefighting operations. A small number of the planes also remain active on the warbird circuit, performing or otherwise appearing at airshows and similar events.

In December 2017, Embraer announced that the Philippines had signed a formal contract to buy six A-29 Super Tucano light attack aircraft after years of back and forth negotiations. The Brazilian planemaker said it would begin delivering the planes in 2019, at which time they could begin replacing at least some of the aging Broncos. The Super Tucanos will very likely feature a sensor turret and precision-guided munitions capability, features already found on examples of this aircraft in service with other military forces around the world.

This purchase also appears to be part the country’s firebrand president Rodrigo Duterte's larger push to modernize the Philippine military’s capabilities. In June 2018, he announced a five year, $5.6-billion spending plan known as Horizon 2. The wishlist includes a host of new systems across the board, including new fighter aircraft and heavy lift helicopters, howitzers and rocket artillery, light tanks, and even submarines, among other things. The Philippines has received pledges from both the United States and China to provide additional defense assistance, as well.

With this in mind, it seems very likely that the Duterte administration is interested in replacing the Broncos for good in the coming years. In addition to its direct order for A-29s through Embraer, the country could submit new requests to the U.S. government for assistance in purchasing additional aircraft of this type.

The United States has already facilitated the delivery of Super Tucanos to Afghanistan, Lebanon, and Nigeria. Further deals could come if the aircraft wins whatever contract might come out of the U.S. Air Force’s own OA-X experiment, which the service says will focus heavily on supporting foreign allies and partners.

All told, it looks as if the Philippines is planning to continue operating the Bronco in the near term, but only as a bridge until it receives new light attack aircraft. It is possible that the OV-10s, especially the OV-10G+s, could serve alongside the newer A-29s for a period afterward before going into retirement permanently. It will be interesting to see whether any other country or private company decides to pick up what’s left of their OV-10 fleet at that point, or if the type is finally on its way to leaving military service entirely.

We have reached out to the U.S. Air Force already for more information about this potential deal and will let you know if we learn any more about the Bronco’s future.