The civilian version of the C-130J is anything but civilized when pushed to its max by Lockheed’s top C-130 test pilot. 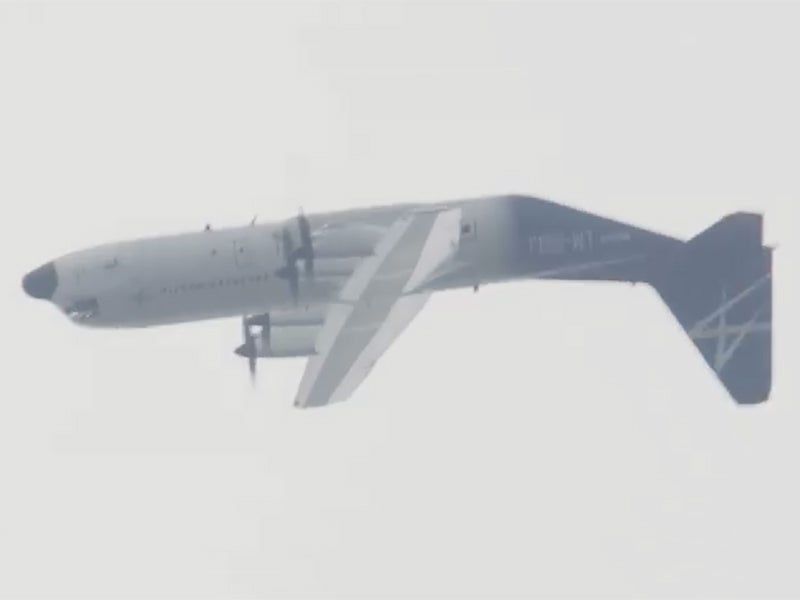 I have been waiting to find some good video of Lockheed Martin's LM-100J flight demonstration from the Farnborough International Air Show, and finally, it has emerged. What you are about to see is downright awesome. C-130J pilots have told me that in the right hands the aircraft could do things that would make anyone look at it in a very different manner. Lockheed's top C-130 test pilot Wayne Roberts proved this statement correct and did so in front of tens of thousands of spectators from around the world.

Here's a direct link to the Facebook video posted below in case it doesn't load on your mobile device.

Apparently, this is Wayne Robert's last air show display before retiring and he clearly knew he could go out with a bang behind the controls of the LM-100J.

The LM-100J is Lockheed's fully certified commercial variant of the C-130J-30 Super Hercules. You can read all about the LM-100J in this past article of mine.

Also during the show, Lockheed announced that the type will be marketed in a firefighting configuration dubbed the 'FireHerc.' The option of two modular retardant delivery systems is envisioned to help fulfill this mission. The first is the Modular Aerial Fire-Fighting System II (MAFFS II). This system, which already flies on some USAF C-130s, can drop 3,500 gallons of retardant through spouts mounted in the aircraft's paratrooper doors.

The second is the Coulson Aviation's Retardant Aerial Delivery System (RADS) that can dispense 4,000 gallons. An enlarged variant of the system with a capacity of 5,000 is also being planned. RADS requires some airframe modifications as it is a gravity drop system that goes through the aircraft's floor but it can drop from higher altitudes than MAFFS II and it can do so at more flexible rates and in more concise patterns. When either system isn't in use, the LM-100Js can work regularly as cargo-carrying aircraft.

The LM-100J's avionics, which includes a heads-up display, terrain avoidance system, advanced stall and wind-shear warning systems, among other features, also enhances its firefighting abilities and overall safety when it comes to executing the unique and demanding mission.

Lockheed is also looking at adding millimeter-wave radar and a distributed aperture electro-optical system that may allow for tanker operations after dark. This could be a huge advantage over other firefighting aircraft that have to call it quits once the sun sets. As for maneuverability down-low, after that flight demo, there is no question that the aircraft is more than capable, and multiple types of C-130s, many far less powerful and advanced, are already doing this mission and have been for many decades.

The LM-100J only has 20 percent of its certification testing left before completion. Two aircraft are flying and five are on order for an undisclosed buyer, but more are likely to follow. Lockheed originally saw a market for about 75 LM-100Js but that number could end up expanding as it picks up additional missions.

The militarized C-130J Super Hercules and its Hercules predecessors have proven to be the multi-tools of the skies, with all types of modular equipment being built for their use. These include everything from new weaponry and sensors to nuclear sniffing and air spraying equipment. Lockheed is also marketing new special operations C-130J variant.

The Hercules remains an intriguing and incredibly relevant flying machine that does some of the most unglamorous but absolutely critical flying the world over nearly 65 years after its first flight. But underneath its utilitarian-appearance, the 'Herky Bird' has the heart of an acrobat, which isn't surprising considering its long and storied history, one that has included acrobatic flying by the Blue Angels' iconic Fat Albert transport and even stunt formation flying by the Four Horsemen.

In fact, if everything is still proceeding as planned, the Blue Angels will be receiving a second-hand C-130J to replace the KC-130T that currently flies as Fat Albert. This means that parts of this amazing routine could end up at an air show near you.

Long live the C-130 and best wishes to Wayne Roberts on his well-deserved retirement!