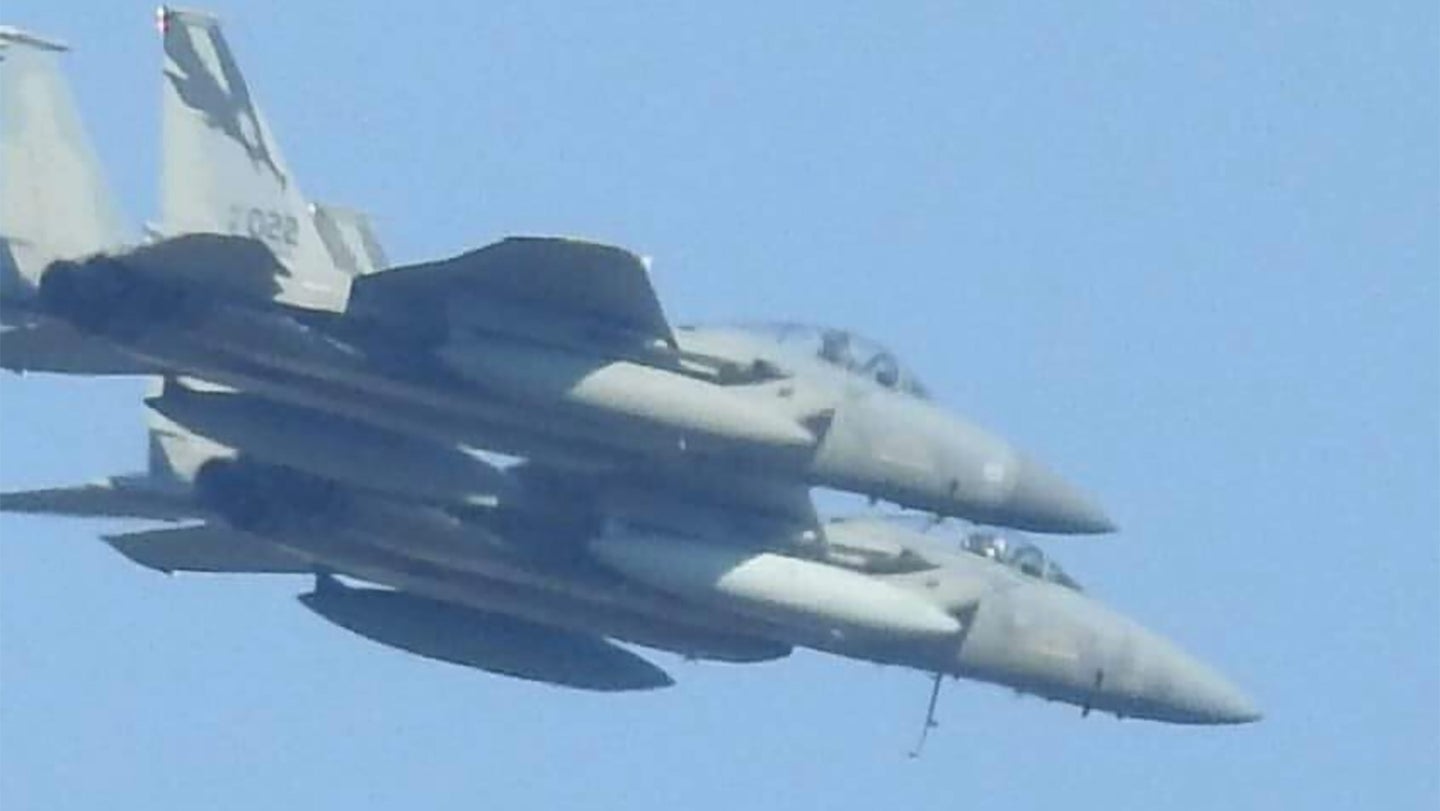 Our friends over at the always great Air Force amn/nco/snco Facebook page posted shots from @stuffinmyairspace of 144th Fighter Wing F-15Cs executing a flyover of Dodger Stadium on July 4th. If you look closely, the lead jet's boarding ladder is deployed, which is not a normal or good situation. If the apparatus were to break off it could smash into the jet, or worse, be sucked down its left side air intake.

It's not clear at this time exactly how the incident occurred or why the flight continued with the flyby with jet in that configuration. We also don't know what speed the ladder is rated for, but one would think it isn't speed rated at all. If it is, maybe the pilot just decided to keep their airspeed below its maximum number and to continue on with the mission.

It's doubtful that the ladder was just left in a down position. If the jets flew from their home base in Fresno or their secondary operating location at March Air Reserve Base, standard boarding ladders would have been used, not the built-in one seen here that is usually used while operating from remote locations without dedicated ground support.

It's possible the pilots worked out of an even closer airport and used the ladders, but there is no way that everyone in the flight failed to notice the deployed ladder before executing the flyover.

We are reaching out to the 144th Fighter Wing public affairs for comment and we will let you know what we hear back.

Update: 2:44pm PST— According to our friend @aircraftspots this was GRIFN01 flight and they operated out of JFTB Los Alamitos, so they were at a remote airfield. In other words, it is quite possible the ladder was used for boarding.

Update: 3:27pm PST— We just talked to Colonel Victor Sikora, the 144nd Operations Group commander. He explained that the issue didn't make itself known until the jets were on the move and the ladder only popped out once they were airborne. Apparently, the Eagle's ladder has been rated up to a 'high speed' and has no adverse impact on the F-15's handling characteristics within its tested envelope. Considering the flyover speed is 300 knots, it was in no way a safety factor and the mission was able to continue. All this was decided after a specific checklist was performed and the flight had a good handle on the situation.

So there you have it, a bit of an unexpected and rare Eagle configuration perhaps, but it wasn't a danger and everyone still got to see the quartet of F-15s roar overhead the stadium on America's 242nd birthday.

Author's note: A huge thanks to the 144th Fighter Wing public affairs team. They were so fast in getting back to us, and had the Colonel ready to explain it in full to us. It doesn't get any better than that!