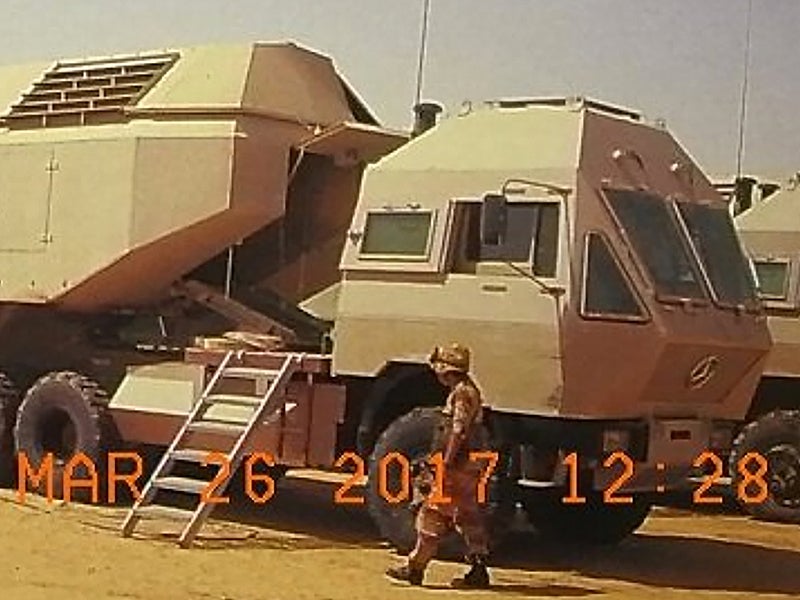 It's rare that someone surprises us with a military vehicle we aren't familiar with, and especially one that is both huge and very exotic looking. But this was definitely the case when our Twitter contact Caesar posted a picture of just such a vehicle.

The armored semi-truck looks like something straight out of a 1970s to 1990s action movie. We weren't alone in this thinking. The parallels with the armored command center and lab vehicle from Universal Soldier immediately came up in the conversation.

There was also ARK II, a television show from the 1970s that fits the bill quite well:

Surely there are many others. And as always, there seems to be a GI Joe toy that predicted everything, including this hulking contraption:

Beyond the pop-culture parallels, there's still the question of what on earth does this big ass Benz do? It turns out that it is a high-tech mobile field hospital—or at least that's what the Saudis want us to believe via markings applied to the trailers. A pair of the trucks made an appearance during a recent parade that marked the end of exercise Raad al-Shamal, according to Jane's Middle East and Africa editor Jeremy Binnie. It is here where the medical group markings can be seen.

Beyond that, virtually nothing is known about these unique trucks or how they came into being. Their design is not only futuristic but also a bit odd. Just look at how you enter the trailer in the top shot.

Vast desert expanses breed large combat vehicles. For instance, the UAE recently developed their huge Multiple Cradle Launcher rocket system that is also based on an armored tractor-trailer concept. But that weapon system is far better known than this one. Armored semi trucks are also used for a number of roles, including moving around America's nukes, but to our knowledge, nothing that looks quite as specialized as this exists outside of the Saudi Armed Forces.

If you have any information about these mysterious trucks let us know!

UPDATE: We now know exactly what they are for, see our update post here.