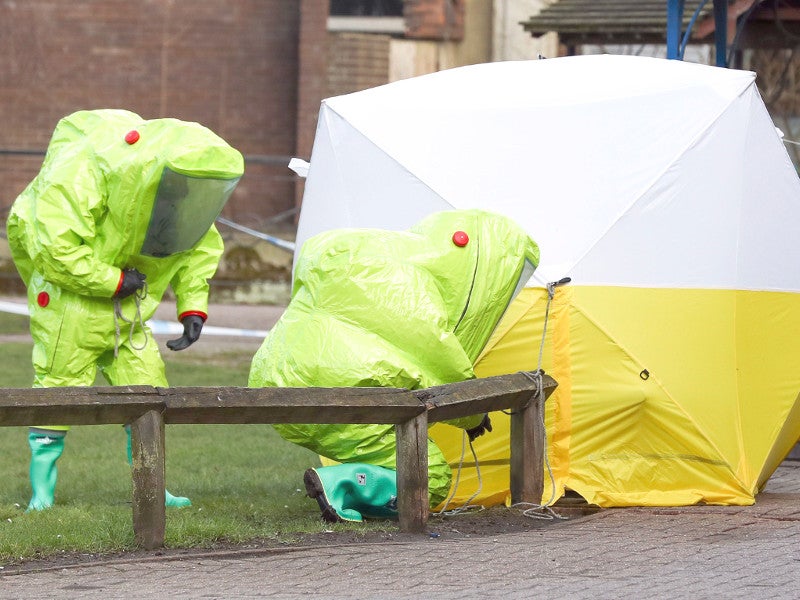 Two British citizens are still in critical condition after coming into contact with a nerve agent similar to the one that almost killed former Russian intelligence officer Sergei Skripal in a failed attempt earlier in 2018. Whether this second attack was deliberate or an accident byproduct of the first, in its typical style, the Kremlin has moved swiftly deny any involvement, make its own conspiratorial counter-accusations, and otherwise muddy the waters surrounding the first incident.

Charlie Rowley and Dawn Sturgess, who have no apparent connection to Skripal or the Russian government, fell ill in Amesbury on June 30, 2018. The town is less than 10 miles from Salisbury, where the first attack occurred on March 4, 2018. Sergei Skripal and his daughter Yulia, who came into contact with the same poison as her father, have both since recovered, but it was a long and reportedly arduous process.

“It is now time that the Russian state comes forward and explains exactly what has gone on,” U.K. Home Secretary Sajid Javid said in a statement to members of the country’s parliament on July 5, 2018. “It is completely unacceptable for our people to be either deliberate or accidental targets, or for our streets, our parks, our towns, to be dumping grounds for poison.”

According to Javid, the United Kingdom had not yet determined whether or not the compound that had sickened Rowley and Sturgess was the same type or from the same batch as the one that put the Skripals into intensive care. He did, however, make clear that specialists had determined it was a so-called “Novichok” agent.

Translating broadly as “newcomer” in English, the Soviet Union reportedly began developing the Novichok family of chemical weapons in the 1970s in order to defeat NATO’s improving defensive measures. It remains unclear how long the program continued or if it might still be ongoing today under a different name.

Post-Soviet Russian officials have at various times denied the project ever existed, either in part or in full, or under that specific name,. The most significant official disclosure came when the Kremlin accused Lev Fyodorov and Vil Mirzayanov, scientists who say they worked on the program in 1992 of disclosing state secrets in talking about the project in interviews with Moskovskiye Novosti. Mirzayanov now lives in the United States.

The Novichok family is reportedly both more lethal but safer to manage than other organophosphate nerve agents, such as Sarin or VX, often coming in a binary state with two distinct compounds that then mix to form the lethal substance. They function in the same way as the earlier chemical weapons, interrupting regular muscle movement and preventing the victim’s heart and lungs, among other things, from functioning normally.

The “leading line of inquiry” is into the possibility that the two innocent bystanders came into contact with either a secondary contaminated site that Skripal never made it to or some leftover debris for that attack, such as a vial that held the nerve agent to begin with, according to Javid. Establishing a link between the chemical signatures between the two compounds could help support this theory, but the Home Secretary said that it might not be possible to make this connection conclusively after so much time has passed.

That the Novichok agent could be potentially deadly after so much time could already indicate that it is particularly persistent. It also raises the worrisome possibility that other remnants of the attempt on Skripal’s life might be strewn elsewhere in the immediate vicinity of Salisbury.

Another possibility is that the Russian President Vladimir Putin or his government, or any middlemen it might have employed to carry out the initial operation, deliberately launched this second attack on random bystanders to cast aspersions on its involvement in any Novichok attacks past and future. A widely circulated and completely unsubstantiated conspiracy theory after the first poisonings was that U.K. authorities were behind the entire affair in order to justify foreign and domestic policies, as well as sanctions aimed at the Kremlin and the administration of Russian President Vladimir Putin.

The two countries have had strained ties for years for a variety of reasons, not least of which concerns the murder of Alexander Litvinenko, another former Russian intelligence officer, who died in London in 2006 after getting duped into taking a lethal dose of the radioactive isotope polonium-210. The United Kingdom accuses the Russian government of having been behind that assassination, as well.

Russia and the United Kingdom also disagree on a host of other issues, including the Kremlin’s illegal seizure of Ukraine’s Crimea region and support for separatists in that country, as well as its involvement in the conflict in Syria. In April 2018, British forces joined their American and French counterparts in launching strikes aimed at Syrian government chemical warfare sites, which officials in Moscow promptly denounced as illegal.

Since Rowley and Sturgess came into contact with the nerve agent in Amesbury, the Russian government has been quick to deflect from any possibility that it is responsible and instead accused the United Kingdom of being the ones who actually at fault. As we at The War Zone have noted, this is part of an increasingly structured and routine response from the Kremlin. Now, Russian officials have gone so far to suggest that the United Kingdom and its allies are the ones who are really spreading misinformation about the two chemical attacks.

“Instead of genuine cooperation London is doing everything possible to muddy the waters, to confuse and frighten its own citizens,” an unnamed press officer at the Russian Embassy in London said in an official statement on July 5, 2018. “One can only guess what the reasons behind such a line of behavior are.”

“We call on Theresa May’s government to put an end to the conspiracies with chemical agents and not to hamper the investigation into what happened to the Russian citizens in Britain,” the Russian Foreign Ministry’s top spokesperson Maria Zakharova said on the same day. She added that the accusations had been putting Russia through “hell,” especially as it is hosting the World Cup.

Russian officials have used this latter point to insist that they could not have been involved in this latest attack, despite the possibility that the agent could have been sitting in the United Kingdom undiscovered since March. It is also just as easy to say that the World Cup would offer a good cover for such an attack precisely because it affords this sort of plausible deniability.

This narrative, among others, is already spreading online on social media and elsewhere, another common component of Russian disinformation tactics. The Kremlin has the tools to readily boost any such counter-argument, no matter how unrealistic, to the point that those ideas take on an organic life of their own and become hard to differentiate from the original state-sponsored propaganda.

It’s not clear whether the new war of words will have any impact on the two countries' already cold relationship. U.K. Prime Minister Teresa May already described the assassination attempt on the Skirpals as being a “brazen act of war” that could have serious ramifications if the country conclusively determined Russia was involved at a state level.

At the same time, May’s government is in a tough spot, particularly over its handling of the United Kingdom’s planned exit from the European Union, also known as Brexit, which has also strained the country’s relationship with its traditional European partners. In addition, U.K. authorities have increasingly butted heads with U.S. President Donald Trump and his administration, which might have otherwise been sure to back up and course of action British officials decide to take.

Despite unanimous agreement within the U.S. Intelligence Community, Trump continues to question the nature and extent of Russian meddling in the 2016 Presidential Election even as concerns mount that the Kremlin could be looking to influence the outcome of the upcoming 2018 mid-terms. It is increasingly clear that Russia had at least some impact on the referendum that led to Brexit, too.

On July 4, 2018, a delegation of Republican members of congress held meetings in Russia where they reportedly raised the question of Russia’s election meddling, but not the Skripal incident or the latest poisoning. Russian lawmakers reportedly took the opportunity to quickly brush off the concerns about any impact they might have in the mid-terms.

Vyacheslav Nikonov, a member of Russia’s parliament, or Duma, said the questioning around the election issue was ““was one of the easiest ones in my life,” according to The Washington Post. “One shouldn’t interfere in elections – well, we don’t interfere,” he said repeating the Kremlin’s official line on the matter that stands in conflict with ever increasing evidence to the contrary.

Trump himself is scheduled to meet Putin later in July 2018. The chemical attacks in the United Kingdom may not even rise to the forefront of those talks, though, which are expected to cover arms control and nuclear weapons issues, the status of Crimea, Russia’s involvement in Syria, and support for separate diplomatic endeavors regarding North Korea.

But if political crises and other priorities in the United Kingdom and the United States end up pushing this issue to the side, it could easily embolden Putin to continue his long-standing campaign to silence opponents at home and abroad. The Russian president recently won a highly controversial re-election bid and will now be in charge of the country, barring some dramatic event, through at least 2024.

"Those who serve us with poison will eventually swallow it and poison themselves," Putin said dismissively of Skripal in March 2018, seeming to imply that the Kremlin was in fact behind that attack. This would seem to make it clear that if the United Kingdom and its allies can’t rise to the challenge we can only expect more such attacks in the future, which may end up threatening the lives random bystanders, such as Rowley and Sturgess, as well.