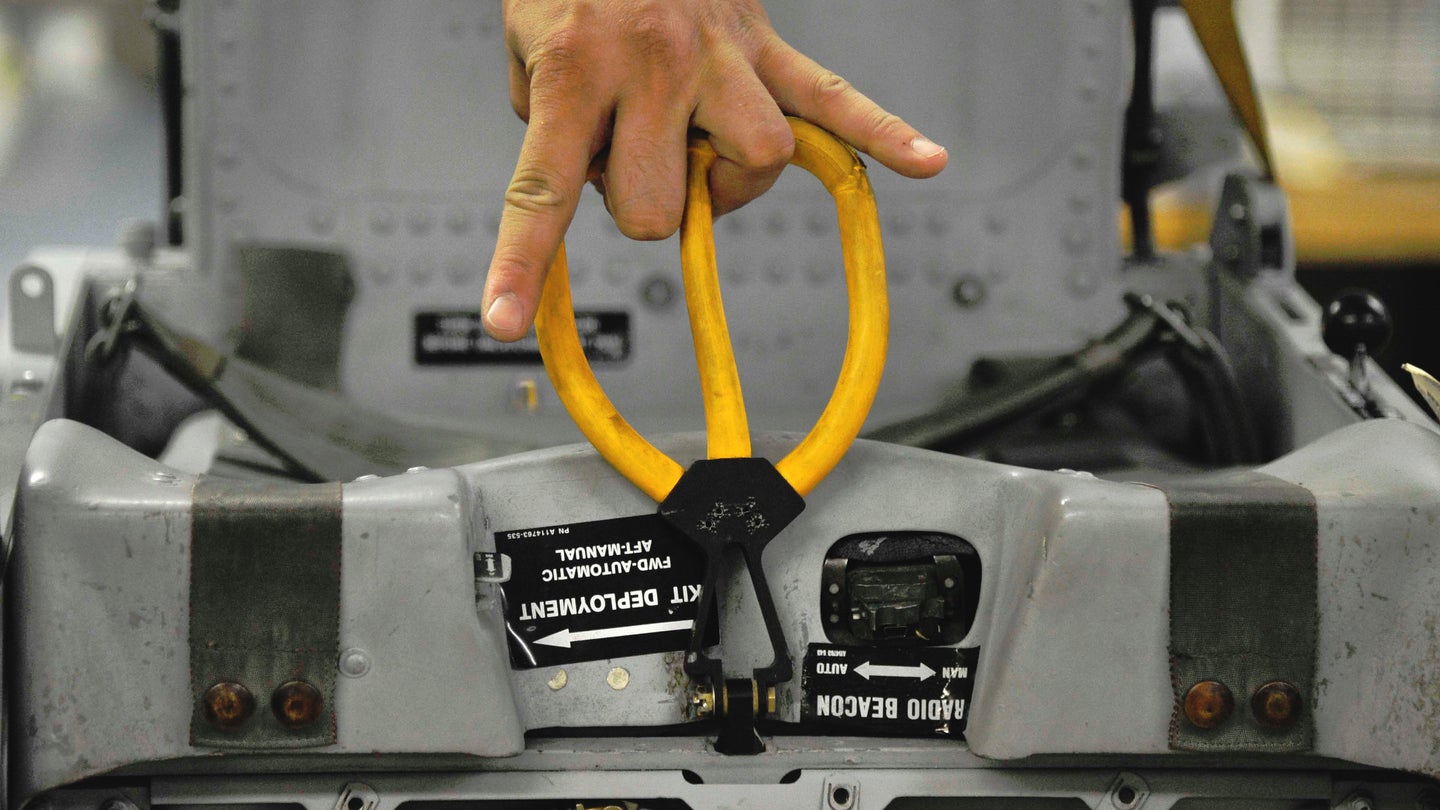 For the first time in decades, U.S. Air Force fighter jet and bomber pilots are getting a new survival rifle, the Aircrew Self Defense Weapon, a variant of the AR-15/M16 pattern design that breaks in half and fits inside a standard survival kit. These aviators would have previously had to rely on pistols or even knives to defend themselves if they ever had to eject over hostile territory.

The Air Force is making the self-defense guns in house by converting standard 5.56x45mm M4 carbines at a rate of 100 per week, according to The Firearm Blog, which was first to report the development. The gunsmiths at Joint Base San Antonio-Lackland in Texas, home of the Air Force Security Forces Center, expect to turn out more than 2,100 of the rifles in total and have already delivered some to combat-coded units.

The guns are “designed for all combat-coded ejection aircraft,” U.S. Air Force Major Docleia Gibson, a spokesperson for Air Combat Command, told Air Force Times in a later report. It, along with “four full magazines, 30 rounds [each], must all fit in the ejection seat survival kit,” she added.

Gibson also said that the Air Force had officially designated the gun as the GAU-5/A, but the service already applied this designation during the Vietnam War-era to a variant of the original M16 rifle. This gun had a 10-inch barrel, which is shorter than present-day M4 with its 14.5-inch long barrel. There was also a GAU-5A/A with an 11.5-inch barrel. The Air Force primarily issued these guns to security personnel guarding planes and facilities on the ground.

Starting in the 1990s, the Air Force began converting both of these weapons into an evolving configuration that was increasingly similar to the M4, called the GUU-5/P, a story I have written about in detail in the past. It is possible that the Air Force has decided to refer to the Aircrew Self Defense Weapon as a subvariant of the GAU-5/A, but then its correct designation would be GAU-5B/A.

Regardless of the nomenclature, this rebooted GAU-5/A appears to share very little with its predecessors. The biggest change is the addition of a special locking system from a company called Cry Havoc Tactical that holds the barrel assembly onto the rest of the gun.

Cry Havoc Tactical claims that a trained individual can install the front end of a weapon with their system and fire their first round within 60 seconds. The user does not need any special tools to put their gun together, which you can see in the video below.

But otherwise, the Aircrew Self Defense Weapon appears to have same basic dimensions of the M4 in its firing configuration. The gun uses the same “direct impingement” operating mechanism found on other AR-15/M16 type guns, which means that after the shooter fires a round, some gas propelling the bullet gets filtered off to cycle the action to fire again.

The arrangement blows any unburnt gunpowder and other particulate matter straight into the inner workings of the gun, which can build up and cause malfunctions if the user doesn’t clean it regularly. Various elements across the U.S. military, especially the U.S. Marine Corps, have increasingly switched to derivatives of the AR-15/M16 pattern that use the gas to move a physical piston instead.

The gun features folding front and rear “iron sights” rather than an optic of some kind, which is likely a product of the need to fit inside the 16-by-14-by-3.5-inch dimensions of the aircrew survival kit. It is possible that the Air Force could include a small, non-magnifying sighting system of some kind in the future that a pilot could attach after reassembling their gun.

However, it could be difficult to ensure that the detachable sight would remain properly aligned with either the gun or the individual shooter. The weapon does have attachment points for optics and various accessories on top and on all side of the handguard.

The limited sights, along with the ballistic limitations of the 5.56x45mm round when combined with a shorter barrel, something you can read about in more detail here, could reduce the ability of the gun to accurately hit targets at even moderate ranges or neutralize them if it does. The Air Force would only say the Aircrew Self Defense Weapon is effective against enemies “beyond” 650 feet away, according to Air Force Times.

The Air Force has been working on this latest project since at least 2017. But the final product is much different from the concept it showed in a briefing at the National Defense Industry Association’s annual Armament Systems Forum & Firing Demonstration that year.

This gun featured a much shorter barrel than the standard M4 and an Sig Sauer arm brace rather than a traditional buttstock. This would have allowed the shooter to stabilize the weapon by strapping it to their forearm or use it as a regular stock if necessary.

All of this would make sense given the obvious desire to keep the size and the weight of the overall weapon down. It is curious that they decided to go with a longer overall gun, especially when there are a myriad short-barrel AR-15/M16 types and derivatives – such as the Sig Sauer MCX that Jordan's King Abdullah II is wielding in the video below – readily available both as complete guns and as conversion kits.

The final design could have been based on a requirement to be able to engage targets at longer distances, but if this was the case the Air Force could have decided to use a different caliber that's more effective when combined with a short barrel. The best known is alternative would be .300 Blackout, which Advanced Armament Corporation first created in the late 2000s specifically for use in AR-15/M16 type weapons and derivatives equipped with sound suppressors.

The company found that the round also worked particularly well in unsuppressed, short-barreled guns. One test demonstrated that an AR-15 with a 9-inch barrel in .300 Blackout with had the same muzzle energy as a 5.56x45mm M4 carbine with its 14.5-inch barrel.

AAC originally designed two basic types of the ammunition, one a supersonic 125 grain round and the other a 200 grain subsonic type specifically for firearms with sound suppressors. The former had ballistics similar to the to the Soviet-era 7.62x39mm cartridge. Since then, various companies have begun building their own .300 Blackout cartridges using various bullets and powder charges seeking to create optimal performance in different situations.

In addition, 5.56x45mm and .300 Blackout have the same case head size and taper, which means that in AR-15/M16 type guns, switching from one round to the other can be as simple as swapping out the barrel. The two types of ammunition can use the same magazines, as well.

With similar requirements in mind, U.S. Special Operations Command recently announced it would conduct field trials with a small number of guns based on the Sig Sauer MCX Rattlers. This is a a seriously compact weapon in .300 Blackout and the SOCOM's requirements included the need for a conversion kit that could use any existing M4 lower receiver.

This combination would seem to fit the ejection seat survival kit size requirements perfectly. It is possible that the Air Force went with a modified M4 as a cost-saving measure and to reduce strains on the logistics system by using as many common parts and ammunition as possible.

Another option would have been to abandon the idea of using a rifle caliber weapon entirely in favor of a more purpose-built person defense weapon, such as the FN P90 or Heckler and Koch MP7. These guns are already in service in the U.S. special operations forces and other government agencies, such as the U.S. Secret Service.

Pistol-caliber personal defense weapons or compact submachine guns would have been another possibility and one that would've allowed the Air Force to maintain ammunition commonality with other existing weapons. In 2015, after ISIS terrorists in Syria brutally murdered a Jordanian fighter pilot who had to eject over that country, the Dutch Air Force began issuing the diminutive 9mm MP9 personal defense weapon to aircrews in the region. The U.S. Army recently announced it was looking to buy a weapon in this category for personal security details, as well.

Of course, any new rifles are much more effective than a 9mm pistol, but a downed aviator’s primary objective is to avoid detection until they are either rescued or they can evade and escape to safety. The new self-defense rifle is more multi-purpose than the survival weapons the Army and later the Air Force issued to aircraft crews during World War II and early in the Cold War, which were more suited to hunting small animals for food, but could also be a burden for a downed and possibly injured pilot to carry for protracted periods of time.

This isn't the first time the Air FOrce has tried to come up with a weapon that might be more useful in a combat situation, but that could fit inside a survival kit, either. In the 1960s and 1970s that service experimented with a bizarre looking gun, commonly called the “arm pistol,” that fired standard 5.56x45mm ammunition from an impressively small package.

The gun, eventually known as the GUU-4/P, proved difficult to aim and shoot and never saw widespread use. Subsequent versions made their way onto the U.S. commercial market, but never saw major sales and are long out of production. If the videos on YouTube are any indication, no one can decide how to hold the guns while firing them, underscoring why they never made it into Air Force service.

But while the risks of Air Force jets getting shot down during America’s present conflicts in places such as Iraq and Syria and Afghanistan are limited, that danger is growing. Small nations and even non-state actors are increasingly more capable of challenging opposing air forces.

Iranian-backed Houthi rebels in Yemen shot down one of the Air Force’s MQ-9 Reaper drones in October 2017. Syrian insurgents brought down a Russian Su-25 Frogfoot ground attack aircraft over that country in February 2018. In that case, the pilot ejected, but killed himself and a number of militants with a grenade after an ensuing skirmish on the ground.

U.S. military aviation accidents have soared recently, too. Just in June 2018, the Air Force briefly grounded all of its B-1B bombers because of a problem with their ejection seats.

This could put pilots in just as much danger if they have trouble over a conflict zone.  The aforementioned incident involving the Jordanian pilot over Syria is a good example. During the U.S.-led intervention in Libya in 2011, an F-15E Strike Eagle crashed in that country due to a technical issue and rescuing forces mistook a crowd of locals eager to help for a violent mob.

The United States has also recently renewed its focus on preparing for potential high-end conflicts with a larger, conventional adversary, such as Russia or China. In that scenario, Air Force aviators could find themselves at increase risk of having to eject behind enemy lines and defend themselves for at least some amount of time.

The steady proliferation of increasingly capable air defenses could make it difficult for traditional combat search and rescue parties to get to a crash site quickly, if at all. Fifth generation fighter jets and advanced stealthy bombers will, by definition, be flying into areas where existing rescue aircraft and helicopters will be unable to follow. This could be a particularly important driving factor in the Air Force's decision to rapidly field the Aircrew Self Defense Weapon.

But whatever the circumstances Air Force fighter and bomber pilots find themselves in now and in the near future, they’ll have the added peace of mind knowing that they have a little extra firepower under their ejection seats.