The U.S. Air Force is looking into purchasing new pylons for its B-52H bombers that could allow them to carry multiple 20,000-pound class weapons under each wing. This would allow the aircraft to carry almost any bomb or missile the service has in inventory now and could be a prelude to integrating new weapons, such as air-launched hypersonic cruise missiles, onto the planes in the future.

On June 21, 2018, the Air Force Materiel Command revealed it was interested in acquiring what it calls the Heavy Release Capability (HRC) pylons as part of the B-52 Heavy Weapon Release Pylon Program in a notice on the U.S. government’s main contracting website, FedBizOpps. The formal request for information says the service wants to get to the Engineering and Manufacturing Development (EMD) phase, which involves work on an actual prototype system and would last approximately 72 months, as quickly as possible.

The HRC equipment would replace the existing Improved Common Pylon (ICP) that the B-52Hs use today. The ICP, in combination with the Heavy Stores Adapter Beam (HSAB) multiple ejector rack, can only accommodate weapons up to the 5,000-pound class.

“When it [the ICP] was introduced, there wasn't a requirement nor did anyone foresee a need to carry weapons heavier than 5,000 pounds,” Air Force Materiel Command said in its request for information. The “pylon will require an internal multi-hook type release mechanism capable of carrying multiple weapons in the 5,000 pound to 20,000 pound weight class.”

The notice says the pylon itself can’t weight more 5,000 pounds. It also refers to “current heavy weapons exceeding 5,000 pounds,” but does not specify any system in particular.

So the question quickly becomes, what weapon or weapons does the Air Force expect the B-52 to carry using the more capable HRC pylons? None of the bomber’s typical load outs

include weapons even close to the existing 5,000-pound limitation.

The nuclear-armed AGM-86B Air Launched Cruise Missile and its conventional derivatives are both less than 3,500 pounds. It is unlikely that the future Long Range Stand Off (LRSO) will be significantly heavier. Even the B-52-launched X-51 Waverider hypersonic demonstrator vehicle had an empty weight of approximately 4,000 pounds.

The last time B-52s were called upon to carry a weapon in a weight class between 5,000 and 20,000 pounds, was during the 1960s and 70s when the Air Force called upon the bombers to deliver the 10,000-pound class AGM-28 Hound Dog cruise missile. The abortive AGM-48 Skybolt that was supposed to replace those weapons had a similar weight.

Since the Air Force specifically says the requirement for the HRC pylon is based on a “current” weapon, one immediate possibility is that the Air Force is interested in giving the aircraft the ability to carry the massive GBU-43/B Massive Ordnance Air Blast (MOAB), also known as the “Mother of All Bombs.”

This huge air-bursting weapon offers a devastating capability against exposed targets over a wide area. It also particularly effective at destroying caves and tunnel complexes with its blast wave, which can suck the air of individuals' lungs and cause massive internal injuries from the overpressure in a confined space.

Unfortunately, the MOAB is also too big to fit inside the B-52’s internal bomb bay. At present, Air Force Special Operations Command MC-130 special operations transport aircraft are the only planes that can employ this 20,000-pound class air-bursting weapon and typically only carry one at a time on a pallet inside their cargo bay. The Air Force would need to modify the GBU-43/B to be work with any underwing rack.

A B-52 carrying multiple MOABs would offer a dramatically increased capability and could fly higher and further than the smaller MC-130s. This could give the Air Force more flexibility in employing the weapon and the potential to do so in higher-risk scenarios. In April 2017, the service dropped the first GBU-43/B ever over Afghanistan, an entirely permissive airspace environment.

Otherwise, there are few other obvious weapon systems that would require the HRC pylons. The bombers can already carry the GBU-57/B Massive Ordnance Penetrator (MOP), which is designed to burrow deep into hardened facilities far underground, internally, but has only done so in testing.

The Air Force envisions employing these bombs almost exclusively for strikes against targets deep in denied areas where the B-52 would be unable to survive. As such, the service says the only platform set up to carry the MOPs on actual operations is the B-2 Spirit stealth bomber. The GBU-57/B is in the 30,000-pound weight class, which would make it too heavy for even the new HRC pylon anyway.

It is also worth noting that the Air Force and NASA have also employed B-52s with specialized underwing pylons and stores racks to test a variety of large experimental air vehicles and rockets. It is possible that the firms who have supplied that equipment in the past could adapt one of those designs to carry whatever weapons the Air Force has in mind for HRC-equipped bombers.

The remaining possibility is that the B-52s need the HRC pylons to support a potentially still-classified weapon system that is either in development or has reached some level of limited operational capability. Even if the bombers were simply supposed to act as the testbed for a new bomb or missile in the 5,000- to 20,000-pound weight class, the Air Force would need to ensure it has the capability to do so now.

We know that in April 2018, the Air Force handed Lockheed Martin a contract worth nearly $1 billion for development of an air-breathing, air-launched hypersonic cruise missile. The service has also been working with the Defense Advanced Research Projects Agency on the separate Hypersonic Air-breathing Weapon Concept (HAWC) program.

Other services, in cooperation with the Defense Department’s secretive Strategic Capabilities Office (SCO), are pursuing other hypersonic weapons, as well. A recent hack of a still unknown U.S. defense contractor led to the exposure of additional details about the Navy’s still-classified Sea Dragon hypersonic submarine-launched anti-ship cruise missile program.

The Pentagon has been supporting that project directly by way of the SCO through funding set aside for “advanced innovative technologies.” The same section in the annual defense budget includes other classified efforts that could require the HRC pylons.

These include “Alternate Strike,” which seeks to reconfigure existing weapons for use on different launch platforms to expand their flexibility, and “Breaker,” a long-range weapon for both ground- and air-launched applications. Another effort, called Strike-X “leverages existing long-range strike capabilities and develops alternative Concepts of Employment (CONEMP) and Tactics, Techniques, and Procedures (TTP) to deliver near-term innovative long-range strike capabilities to Combatant Commanders.”

We at The War Zone have already presented compelling evidence that Sea Dragon could be an outgrowth of apparently defunct Revolutionary Approach To Time-critical Long Range Strike program, or RATTLRS. This Navy-led project sought to develop a cruise missile with a high supersonic speed that sea or air platforms could employ.

Lockheed Martin was heavily involved in that program, as well, and had produced full-size mockups of the proposed weapon that evoked the size and shape of their Cold War-era D-21 drone. The D-21 was an 11,000-pound unmanned reconnaissance platform that was originally paired with an M-21 mothership derived from the A-12 spy plane.

Difficulties in that arrangement led Lockheed to develop a system that allowed B-52s to launch the drones. The bombers would be a good option to carry any RATTLRS-derived weapon, as well.

In March 2018, Lockheed Martin notably brought out an old model of the RATTLRS missile to the Air Force Association’s annual Air War Symposium, but without any real explanation as to why. It is possible that this could have been an effort to showcase the firm’s existing experience leading into the hypersonic cruise missile project, too.

The RATTLRS project also focused heavily on the anti-ship role, which might be a future capability of any hypersonic cruise missile-armed B-52 in the future. Late in the Cold War, the Air Force configured a number of B-52G as ship-killers carrying AGM-84 Harpoon missiles.

Given increasing concerns about the growing naval capabilities among potential near peer-opponents, such as Russia and China, the Air Force has been working on restoring the anti-ship capabilities of both B-52 and B-1 bombers. On June 21, 2018, the service announced it the 28th Bomb Wing and its B-1s at Ellsworth Air Force Base would be the first to return to this role armed with AGM-158C Long Range Anti-Ship Missile (LRASM).

Lastly, the larger "weapons" the Air Force might be looking to integrate onto the B-52s using the new pylons may actually be air-launched unmanned combat air vehicles. The Air Force Research Laboratory has been working on a number of conceptual armed, lower cost drones as part of the Low Cost Attritable Strike (LCAS) and Low Cost Attritable Aircraft Technology (LCAAT) programs.

A B-52 would be a perfect platform to carry those drones closer to the target area, effectively extending their range and potentially helping them penetrate deeper into denied areas. It might even be able to recover them at the end of a mission, a concept the Defense Advanced Research Projects Agency is also working on as part of its Gremlins drone swarm program.

But adding any such long-range, super-fast strike weapon, or other type of advanced underwing store, to the B-52’s inventory would help keep those aircraft viable during higher-end conflicts in the decades to come. The Air Force is separately looking to re-engine the bombers to make them more cost-effective to fly through at least 2040. Without an improved stand-off capability, the bombers will still find themselves only increasingly vulnerable to hostile fighters, advanced enemy air defenses, and associated long-range sensors.

The HRC pylons could help the Air Force turn the B-52s into flying hypersonic missile trucks that would offer increased flexibility during a crisis. In 2016, the service had raised the possibility of expanding the bomber's ability to carrying smaller conventional bombs and missiles, turning it into an "arsenal ship" that could orbit over or near the battlefield providing support across a wide area. The new weapons racks would be well in line with this concept and would expand the available weapons the aircraft could carry in that role.

And combined with a high-supersonic or hypersonic cruise missile, the planes could have the ability to rapidly engage critical time-sensitive targets, including pop-up air defenses, mobile nuclear-capable ballistic missile launchers and other advanced weapons, and even senior elements of an enemy’s regime, while operating safely at the edge of an opponent’s integrated air defense network. Of course, even if the bombers just end up being able to carry multiple MOABs into a limited conflict zone, such as Afghanistan, it would be a fearsome capability.

Given the Air Force’s aggressive planned schedule to develop the HRC pylons, we may not have to wait long to see what the service actually has in store next for the venerable B-52s. 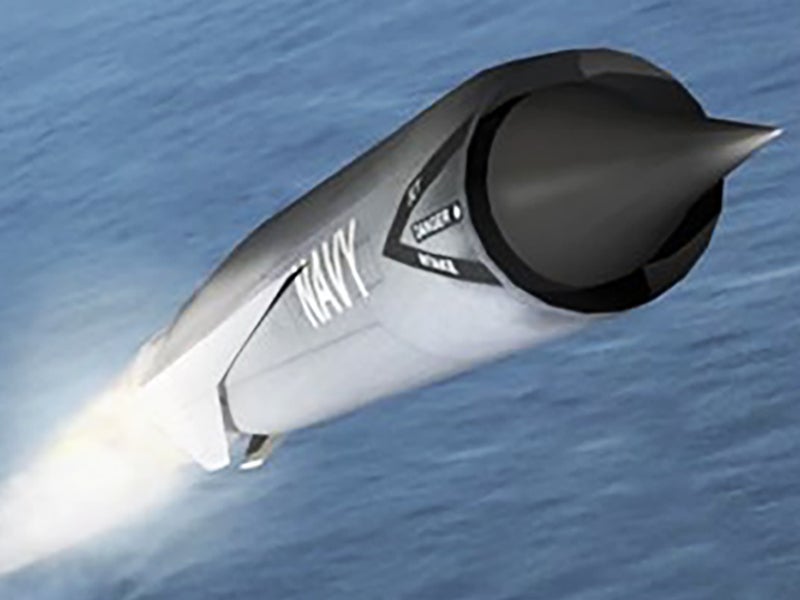 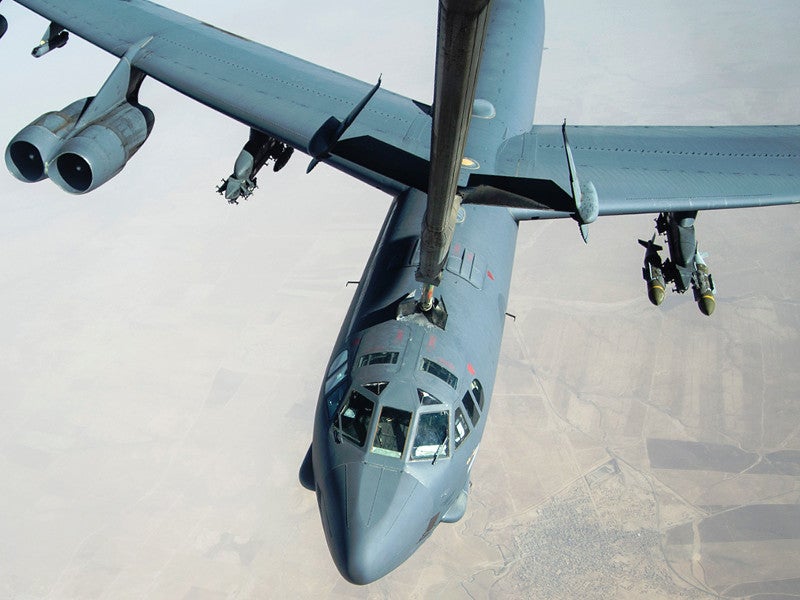 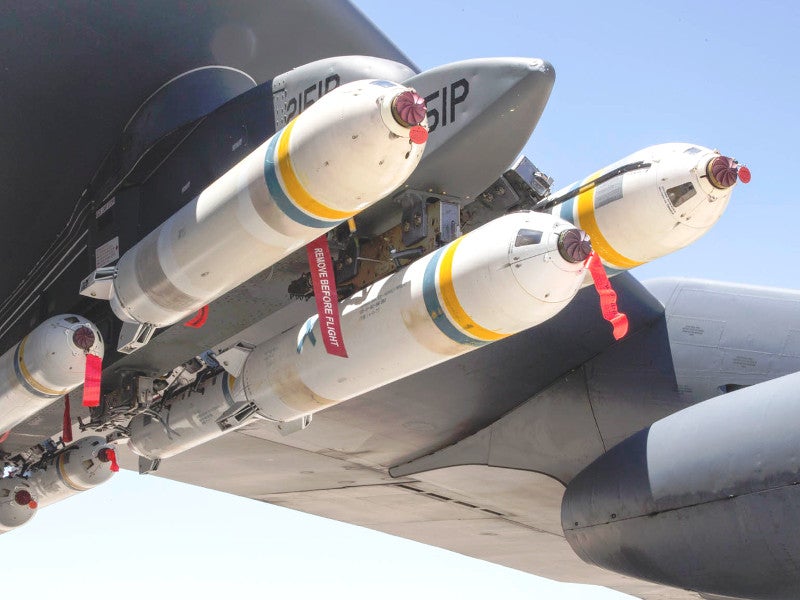