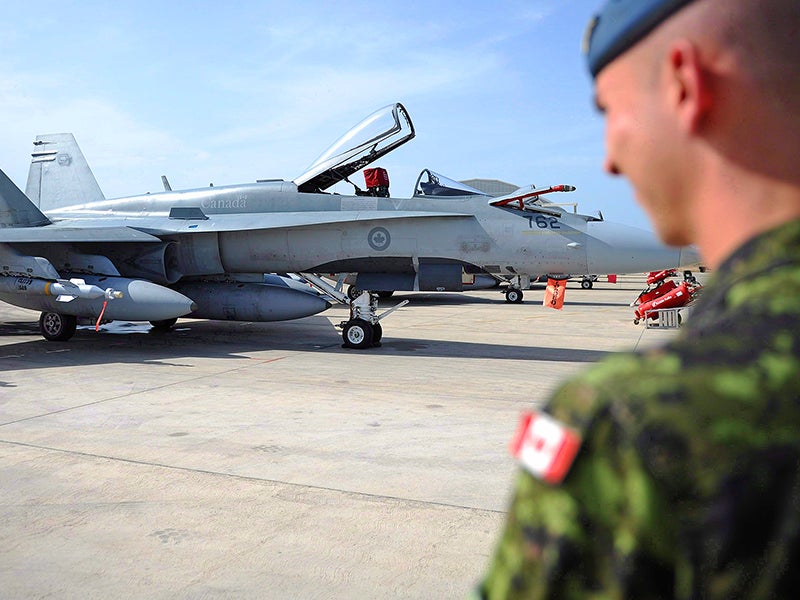 Canada's meandering CF-18 Hornet replacement saga continues to roll forward at a glacial pace. But the groundwork is being laid for a grand fighter competition that could be worth as much as $15B and will conclude in the coming decade. As a reflection of the spiraling relationship between the Trump and Trudeau administrations, not to mention the growing trade dispute between the longtime allies and neighbors, Canada may deeply inhibit the chances of the F-35 and F/A-18E/F winning the vaunted contract.

Reuters reports that a plan is being discussed that would penalize candidate fighter manufacturers from countries that have inflicted economic damage on Canada. At least at this point in time, such a move would obviously target the U.S. and its entrants into the contest, both of which are thought to be favorites to win within many defense and aerospace circles. As a result, European competitors EF2000, Rafale, and Gripen-E, would gain a newfound advantage over their American counterparts.

Clearly, this could be an action by Trudeau to remind the Trump administration that it will act in its own way if tariffs are raised on various products and an agreement on reforming NAFTA is not reached. The final decision to inject this type of penalty into the fighter tender is to come expected sometime next year when the competition's rules and requirements are set in stone, so there is still time to reverse the decision even if it gets made in the near term.

After another major trade dispute, albeit one that was aerospace related, derailed Ottawa's plan to purchase Super Hornets as an interim measure, Canada turned to Australia and its second-hand F/A-18A/B Hornets to help bolster the RCAF's tired legacy Hornet force. Originally, 18 of those planes were eyed for purchase and eventual operations with RCAF after receiving life-extension and still undefined capability enhancing upgrades. Now that number has been pushed up to 25.

The additional airframes will end up being used for spare parts and for training and testing purposes. The cost of the exact deal and what it all includes beyond the airframes themselves is still unknown but the Ottawa Citizen states that $500M (Canadian) has been put aside for the entire program. This is a significant amount of money for an initiative that primarily includes just 18 flyable Hornets that were manufactured in the 1980s.

The U.S. still has to approve the transfer of the used Hornets from Australia to Canada, which was expected to be a non-issue, although it is now possible that the Trump administration could use it as a fulcrum in the ongoing trade dispute with their neighbors to the north. But doing so could shatter defense industrial and military-to-military ties between the U.S. and Canada, which include cornerstone military cooperation programs like NORAD. On the other hand, if everything goes as plan, the jets will start arriving in Canada in the first half of 2019.

Currently, the RCAF has roughly 76 Hornets in service, the last of which is slated to fly till 2032. The next generation fighter program looks to purchase 88 airframes in total.