A new official report raises serious concerns about whether the new helicopters will actually hurt the Afghan military's ability to operate. 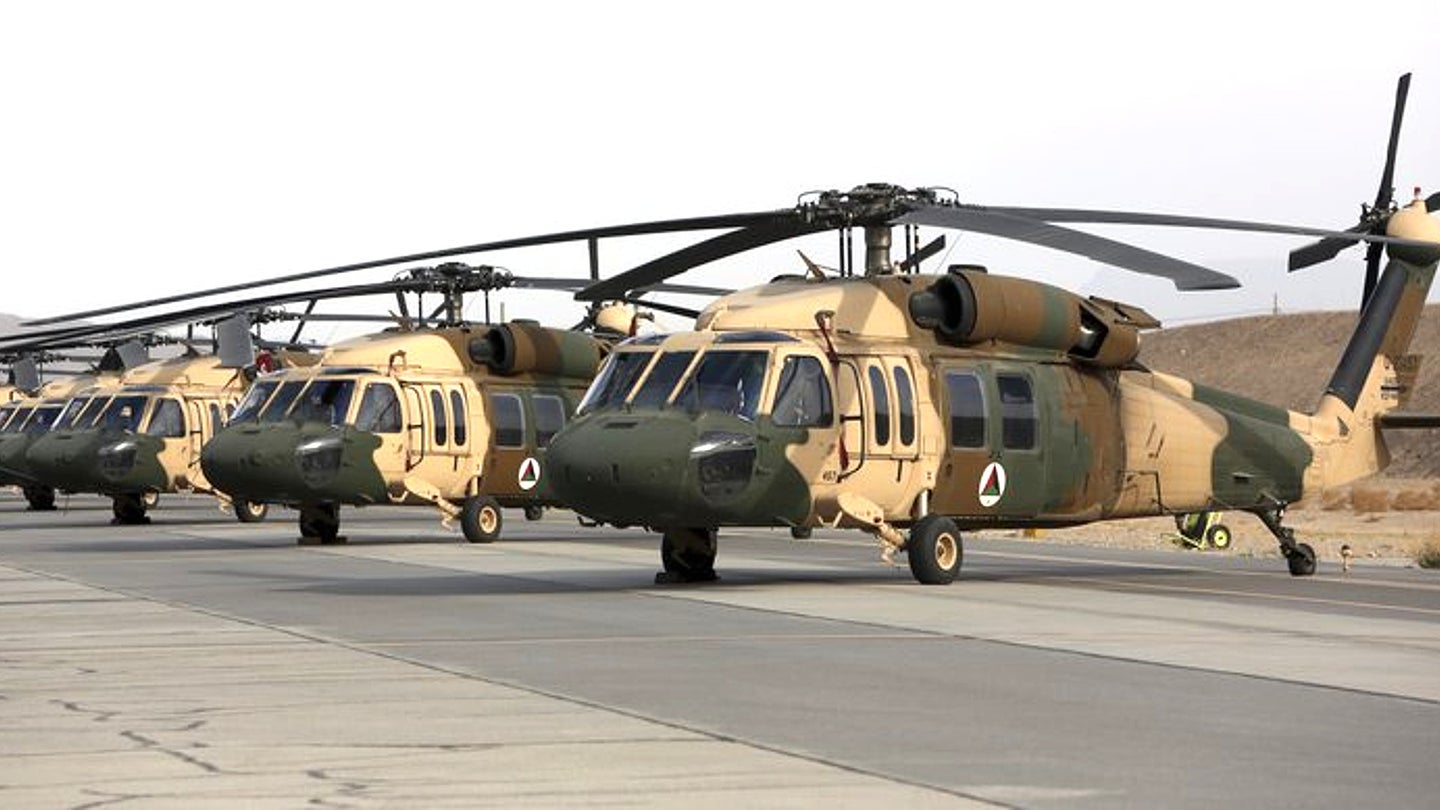 A report from a top U.S. military watchdog has finally acknowledged that the UH-60A+ Black Hawks that the United States is supplying to the Afghan Air Force are less capable and harder to maintain than the Russian-made Mi-17 Hip helicopters they have now. The review raises concerns that this could limit Afghanistan’s ability to conduct operations across the country unless steps are taking to mitigate the loss of capability, something we at The War Zone have long warned could easily be the case.

The Pentagon’s own Office of the Inspector General included these frank admissions in a routine, periodic update on U.S. military operations in Afghanistan, nicknamed Operation Freedom’s Sentinel, and assistance to the Afghan National Defense and Security Forces (ANDSF), which it released in May 2018. The Department of Defense leads this oversight effort, which also includes representatives from the U.S. State Department and U.S. Agency for International Development.

“The transition [from Mi-17s to UH-60s] presents several challenges that have yet to be fully addressed,” the report says in a section dedicated to the issue. “Black Hawks do not have the lift capacity of Mi-17s.”

“They are unable to accommodate some of the larger cargo items the Mi-17s can carry, and in general, it takes almost two Black Hawks to carry the load of a single Mi-17,” the review continues. “Furthermore, unlike Mi-17s, Black Hawks cannot fly at high elevations and, as such, cannot operate in remote regions of Afghanistan where Mi-17s operate.”

These are relatively damning statements to come out of the Pentagon itself, given that it has pushed for and continually defended the delivery of the Black Hawks to the Afghan Air Force as essential to both the effort to modernize that service and a broader goal of improving the Afghan military’s ability to conduct operations independently of the NATO-led coalition in the country.  The U.S. military eventually hopes to supply a total of nearly 160 UH-60s, including gunship versions with forward-firing weapons, to both the Afghan Air Force and the special operations-dedicated Special Mission Wing (SMW).

As of December 2017, the Afghan Air Force had eight UH-60A+ helicopters. The plan is for the service to have 52 of the rotary wing aircraft operational by the end of 2019. The A+ model aircraft have the same engines as the later UH-60L, as well as other minor modifications, but lack the latest updates available on U.S. Army types, such as digital flight management systems.

But even so, the Black Hawks are significantly more complex than the Mi-17s, which raises additional maintenance and logistics issues. Afghan ground crews are responsible for 80 percent of the maintenance on the Hips themselves, with the remaining 20 percent being heavy depot maintenance they do not have the facilities to perform in-country. Private contractors provide the bulk of the support, at significant additional cost, for the other aircraft types across the Afghan Air Force and SMW.

“The Mi-17 is ‘much more conducive to the education level available in the general Afghan population than the UH-60As’ when it comes to maintenance,” the 9th Air Expeditionary Task Force-Afghanistan (AETF-A), the U.S. Air Force’s top command for operations in Afghanistan, which also oversees advising the Afghan Air Force, said, according to the Pentagon Inspector General’s review. “The expectation is that the AAF will be almost entirely reliant on contractors for Black Hawk maintenance in the near- to mid-term.”

And with Mi-17s still being the workhorse of the Afghan Air Force, the U.S. military has faced additional challenges in maintaining that capability while at the same time trying to work toward phasing it out. This has been most pronounced with regards to transitioning qualified pilots and other aircrews to operate Black Hawks.

“Even though the Mi-17 is being phased out, 9th AETF-A said the new pilots are needed to replace Mi-17 pilots who migrate to Black Hawks,” the Inspector General report notes. “This raises concerns about the efficiency of training Afghan pilots to fly an airframe that is being phased out, rather than putting new trainees directly into the Black Hawk pipeline.”

The U.S. military has sought to downplay these issues. In a statement to Bloomberg, U.S. Army Army Lieutenant Colonel Kone Faulkner, a Pentagon spokesperson, said that the UH-60s would be able to perform 90 percent of the missions that the Afghan Mi-17s do at present, but did not offer any specifics.

It is difficult to imagine how this could be an entirely accurate appraisal of the situation. Though the UH-60 may have the necessary performance to conduct individual missions, those helicopters simply will not be as flexible and rapidly able to move around Afghanistan’s mountainous terrain as the Mi-17s.

Members of the U.S. Air Force recently noted publicly in a video seen below that switching from HH-60G Pave Hawk rescue helicopters, a variant of the Black Hawk, to the Army’s larger and more powerful CH-47 Chinooks allowed them to fly straight over certain mountains instead of having to go around them. Those same individuals also raised the issue of the smaller helicopters limited payload capacity, especially in the hot-and-high environment in the country. This has been an issue for other types of helicopters the Afghan Air Force operates, as well.

“In many cases the UH-60 is as, or more, capable than the Mi-17,” Faulkner insisted to Bloomberg. One version “provides more firepower than the Mi-17 variant, which is limited to rockets only and is less maneuverable,” he noted.

This is not entirely accurate. The Hips can and do carry forward-firing 23mm gun pods in addition to unguided rockets. They also have additional machine guns mounted at the forward doors to the main cabin. Regardless, between June and November 2017, helicopters with these weapons conducted nearly 20 percent of all Afghan Air Force air-to-ground fire support missions.

And neither the Pentagon’s Inspector General’s report nor Faulkner even touched on why any of this is an issue to begin with. For years, members of Congress had increasingly questioned why the U.S. military was buying Russian-made helicopters instead of offering an American-built platform, an issue that only became more significant after Russia illegally annexed Ukraine's Crimea and ended up under significant U.S. sanctions.

Now unable to buy new Hips straight from the manufacturer, the U.S. military has already experienced significant difficulties keeping both the existing Mi-17s going and delivering the new UH-60s, which has required some almost bizarre bureaucratic shuffling. It’s also important to note that the Afghan Air Force has had a long-standing requirement for a total fleet of more than 50 Hips, but it has never been able to reach that target.

As of December 2017, the Afghan Air Force had 47 Mi-17s in inventory, but 24 of them were non-mission capable due to maintenance issues. In May 2018, Afghan forces blew up one of these helicopters on the ground after a reported “hard landing” apparently totaled the aircraft, further reducing the available fleet.

In one attempt to quickly make up for these shortfalls, which continue amid a worrisome surge in Taliban and other insurgent activity since 2017, the U.S. military actually transferred two Mi-17s to the Afghan Air Force from U.S. Army’s own Company C, 1st Battalion, 223rd Aviation Regiment at Fort Rucker in Alabama. This unit runs a so-called “Non-Standard Rotary Wing” training program that employs these Russian-built helicopters.

At the same time, the U.S. military has been rapidly acquiring the necessary UH-60s by functionally buying them from itself and then making arrangements to send them to Afghanistan. These aircraft have come by way of the Army-run Blackhawk Exchange and Sales Team, or BEST, which works to exchange retired UH-60s of various types with other federal agencies or sell them to allies, partners, and private companies.

In effect, the Army “sold” the helicopters to the U.S. military’s Combined Security Transition Command-Afghanistan (CSTC-A), which “purchased” them using funds Congress has set aside in the Pentagon’s budget to support Afghanistan’s military. In February 2018, the Pentagon asked legislators to allow them to use the money they had “gained” in this transaction to buy new UH-60M helicopters for the Army itself. The reality of what occurred is closer to moving the funding from one line in a spreadsheet to another and handing over dozens of helicopters to the Afghans essentially for free.

Together with the U.S. military’s Inspector General’s review, this can only raise questions about the efficacy and oversight of the overall efforts to modernize the Afghan Air Force. It also prompts concerns about whether or not Afghanistan’s military will suffer a significant loss in capability in the near- or even mid-term, which will require the United States and its partners to remain in the country longer or even take a newly active role in the conflict.

Of course, none of this is necessarily new or surprising. As noted, I myself had warned about exactly these issues, writing in September 2017:

It’s hard to imagine the Afghan UH-60 fleet will be able to match that level of independent operation any time soon and the transition could throw the relative stability of the “advanced” Mi-17 program into disarray. Captain Salvin told Military Times that the U.S. military plans to provide training more than 60 future UH-60 pilots in both  Afghanistan and the United States, starting between October and  November.

But it’s not at all clear where these aviators would come from and Salvin suggested this would be separate for transition training for existing Hip crews. As of July  2017, the Afghan Air Force had 82 Hip pilots in total, including 39 co-pilots and 11 instructors, according to a quarterly report from the Special Inspector General for Afghanistan Reconstruction (SIGAR), a top U.S. government watchdog.

If the U.S. military plans to pull a significant number of Mi-17 pilots and crews off the line for these training courses, it will have to fill in the obvious and immediate gap with American aircraft or contractors,  or otherwise accept that the Afghan military will have a significant shortfall in air mobility capability. SIGAR said in its July 2017  quarterly report that the Hips had flown 50 percent of all Afghan Air  Force missions in the preceding four months despite reportedly having the lowest operational readiness rate of any of the service’s airframes. American officials blamed the low availability on the age of the aircraft, but it seems very likely that this heavy utilization was a  significant factor, as well.

There’s also no indication of how long the training programs will last and how long it will be before the Afghans can routinely conduct missions and necessary repairs independent of coalition advisers and contractor support with the UH-60. We do know that it took years for both the Afghan military and police to reach their existing proficiency with the Mi-17, despite it being a significantly simpler aircraft and there being an existing Soviet-trained experience base.

I reiterated many of these points when additional information first emerged in December 2017 that suggested these issues were already cropping up. Now it seems all but certain that these factors will have at least some impact on Afghan operations in the coming months. None of this can come as a shock to the U.S. military, either, which saw the release of another scathing Inspector General review of the Afghan Air Force as a whole in January 2018.

Perhaps thankfully, Afghanistan’s President Ashraf Ghani has recently implemented a unilateral eight-day ceasefire, which began on June 12, 2018. This includes the Eid al-Fitr holiday, which marks the end of the Islamic holy month of Ramadan, on June 15, 2018. The Taliban responded with its own first-ever ceasefire declaration as a goodwill gesture.

This will give the Afghan military at least something of a respite from what has already been a bloody year of fighting. Unfortunately, it won’t be anywhere near enough time for the Afghan Air Force to sort out its helicopter difficulties, which, based on what we know now, could easily continue for years to come.