Lockheed Martin and Raytheon say the update will improve the jet's capability and save money, but it could exacerbate existing sustainment issues. 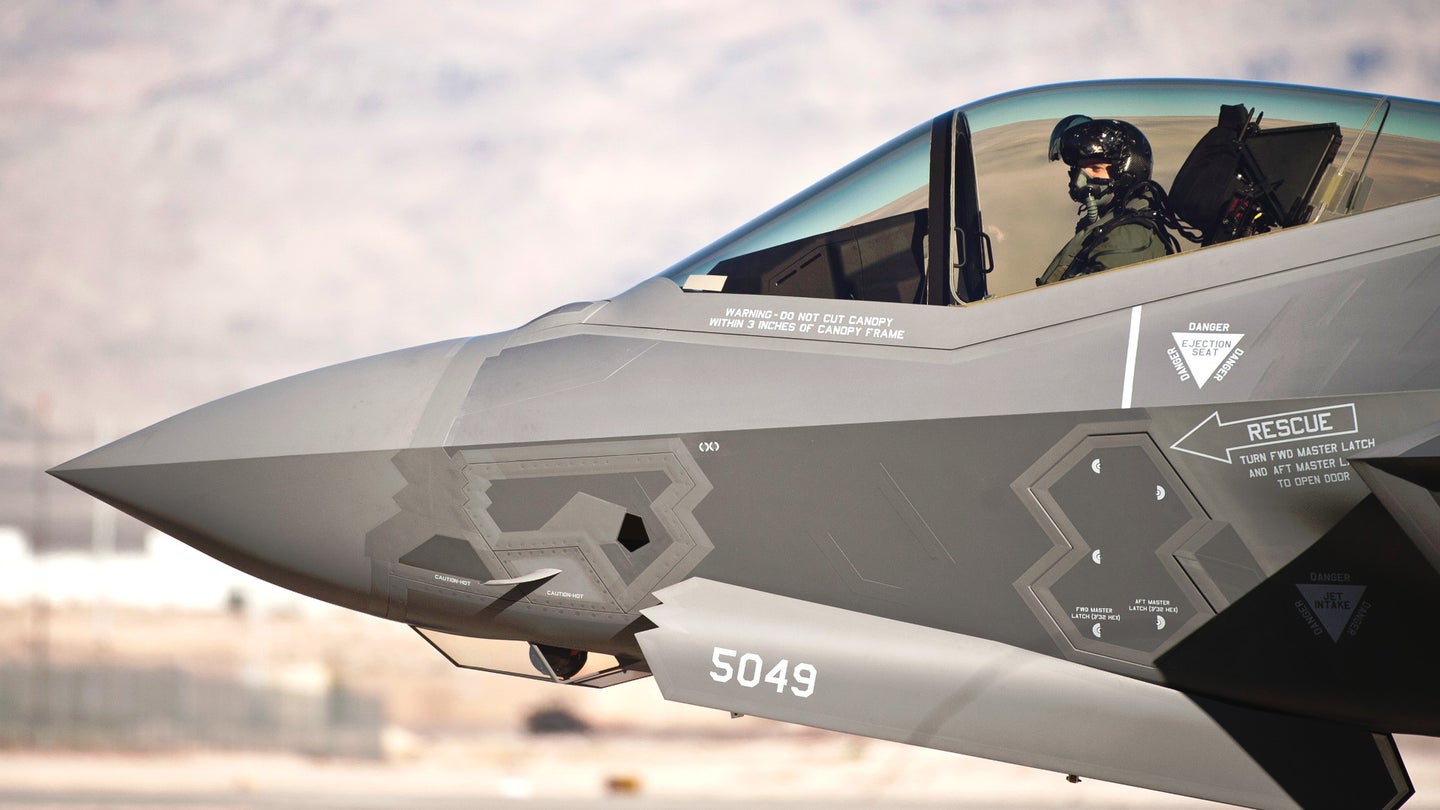 Lockheed Martin has officially announced that it has hired Raytheon to supply a new set of cameras for the F-35 Joint Strike Fighter that will further improve the pilot’s situational awareness. This upgraded Distributed Aperture System, or DAS, will be both cheaper and more capable, but could lead to complications in the future as the U.S. Air Force, Marine Corps, and Navy all have to decide whether or not to upgrade existing aircraft that still have the original setup.

On June 13, 2018, the Maryland-headquartered defense contractor issued a press release regarding the selection, but Aviation Week had been first to report on the decision in March 2018. Northrop Grumman, which provided the original DAS, also known as the AN/AAQ-37, will continue supplying those systems for the aircraft through the Lot 14 production run, with Raytheon taking over afterward. Customers are set to begin receiving the first Lot 15 jets with the new cameras in 2023.

The exact specifications of the updated DAS remain unknown as yet, but Lockheed Martin says that it will be five times more reliable and twice as capable as the older AN/AAQ-37. At present, the DAS consists of six electro-optical cameras positioned at various points around all variants of the Joint Strike Fighter that feed information into the jet’s mission systems and then push that data into the pilot’s helmet.

What this does is give them a full, 360-degree panoptic view, even allowing them to “see” through the aircraft’s fuselage. In addition, the system can spot possible threats and has the ability to automatically identify targets for the aircraft’s other sensors, helping the pilot track objects in the air and on the surface. A 2014 test even demonstrated that it could work as a means to monitor ballistic missile launches. You can read more about how it works in depth here.

But the AN/AAQ-37 has already been in service for nearly a decade and was in development before that, which has led to it being increasingly outdated. The same goes for the companion Electro-Optical Targeting System (EOTS) under the aircraft’s nose, which Lockheed Martin is also in the process of upgrading. The new version of that system will include a desperately needed capability to engage moving targets with laser-guided weapons, an issue you can read about in more detail here.

It seems almost certain that Raytheon’s system will offer higher fidelity imagery, faster and more seamless “stitching together” of the video feeds from the different camera positions, more reliable identification and classification of potential targets, and other improvements. The updated arrangement may be more physically robust, as well.

In its most recent annual review of the F-35 program, covering developments during the 2017 fiscal year, the Pentagon’s Office of the Director of Test and Evaluation cited this last issue as the most pronounced problem with the existing DAS. Damaged camera windows were a major reason for aircraft ending up unavailable for operations or testing, even if they were still airworthy.

The report also noted that there was no common standard between the services of what level of damage would prevent the aircraft from adequately performing its mission. The Air Force said that F-35As with broken camera windows were entirely non-mission capable, while the Navy had determined that this only left its F-35Cs partially mission capable. There was no information on the standard the U.S. Marine Corps applied at the time to its F-35Bs.

Physically strengthened camera assemblies could be one of the reasons why Lockheed Martin and Raytheon are sure the new system will be more reliable. And in part due to that increased reliability, the two firms also say the upgraded DAS will help cut unit production and sustainment costs equal to more than $3 billion across the life cycle of the aircraft.

The second issue is particularly important for Lockheed Martin, which has come under increasing fire from the Pentagon itself for not making sufficient progress in trimming the price tag of individual F-35s or finding ways to make them less expensive to operate. The company only finalized the Lot 11 contract in May 2018, more than six months behind schedule, after particularly tense negotiations with the U.S. military.

Lockheed Martin wants to get the unit cost across all F-35 variants down to below $80 million by 2020. At present, the price of an F-35A, the cheapest of the three types, is $95 million.

In March 2018, Aviation Week noted that Raytheon’s defeat of incumbent Northrop Grumman to supply a new DAS could be the first indication of a broader trend. Lockheed Martin could potentially seek out new vendors across its internal supply chain as it looks for any additional ways to cut costs.

“The supply chain competition for the next generation F-35 Distributed Aperture System resulted in significant cost savings, reliability and performance improvements,” Greg Ulmer, Lockheed Martin’s Vice President and General Manager for the F-35 program, said outright in the company’s June 2018 press release about the DAS decision. “We are aggressively pursuing cost reduction across the F-35 enterprise and this initiative is a clear demonstration of our unrelenting commitment to reduce costs and deliver transformational capabilities for the warfighter.”

This is essentially the same language Lockheed Martin and the U.S. military had made in its initial decision to pursue two possible engines for the F-35. Then-Secretary of Defense Robert Gates nixed the alternate F136 engine in 2011, one many short-sight decisions that found some immediate cost-savings up front, but led to cost growth and other issues in various programs later on. Pratt & Whitney, which makes the F135 engine that has gone on to power the Joint Strike Fighters, announced on June 12, 2018, that it had begun development of a "Growth Option 2.0" upgrade for that turbofan as part of a larger effort to address existing problems and limitations.

But this could easily create new headaches for the already often vexing Joint Strike Fighter program. Lockheed has already delivered 300 F-35s to the U.S. military and foreign participants in the project, all of which have the AN/AAQ-37. The firm has dozens of additional jets already in production or on order through Lot 10 and, as already noted, doesn’t even plan to make the DAS shift until it has finished work on at least four more production lots.

This can only create at least some new level of logistical difficulty by creating essentially at least two distinct configurations of each of the three variants. It's true that military aircraft receive significant upgrades and major modifications all the time, but the F-35 is a complex design to begin with that has suffered delays and difficulties in production owing in no small part to the stringent standards it has to adhere to in order to maintain its low-observable characteristics.

Raytheon's cameras will more than likely use as much of the existing mounting architecture as possible to save costs, but this won’t allow operators to mix and match cameras from the AN/AAQ-37 and the new system if one of them breaks, either. As such, any unit that ends up operating a mix of aircraft with different systems installed would have to source a larger array of replacement parts and services.

The same goes for the upgraded EOTS, which will require more significant and expensive changes to the aircraft’s internal structure. And unless the upgrades occur at the same time, it is possible that there may be aircraft with and without one upgraded sensor suite or the other.

The F-35’s internal computer brain and its associated cloud-based network, known as the Autonomic Logistics Information System (ALIS), is supposed to help manage these issues. However, it already has difficulty properly identifying which components are malfunctioning and often tells ground crews to send systems that are in perfect working order back to the depot.

And since sensor fusion and data sharing are at the core of the F-35, units operating aircraft with different sensor configuration, and software builds necessary to support them, may have trouble operating together. If Raytheon’s DAS and the new EOTS are supposed to offer a significant leap in reliability and capability, then the services may just increasingly feel uncomfortable deploying older aircraft in areas where there is the potential for an actual high-end conflict.

U.S. military F-35 operators have already largely relegated jets with the obsolete 2B software suites to training missions and, even then, those aircraft have low availability rates – an average of 40 percent or less depending on the variant. In May 2018, U.S. Air Force Colonel Paul Moga, head of the 33rd Fighter Wing at Eglin Air Force Base, told Military.com that his jets, among the oldest F-35As in the service, were “on life support.” In September 2017, the Air Force, Marine Corps, and Navy had already begun to wonder whether it would ever be cost effective to upgrade those jets to a more combat-capable configuration.

Just based on software blocks alone, the three services operate F-35s in three different configurations. This also doesn’t take into account the different subvariants of the software code, which they have not yet uniformly applied across the Joint Strike Fighter fleets.

A recent report that the Government Accountability Office (GAO), a congressional watchdog, released earlier in June 2018 was highly critical of the Joint Strike Fighter program’s plans to move toward full-rate production without resolving  a number of unspecified key deficiencies and without any clear plans about what it would do with older aircraft running out of date software. The review also complained that the costs associated with future Block 4 jets are unknown and that it is unclear what this "final" will actually consist of in terms of missions systems and other capabilities.

The U.S. military's central F-35 program office has already proposed breaking this down further into Blocks 4.1, 4.2, 4.3, and 4.4, with various incremental upgrades. At the same time, existing aircraft would receive upgrades on a similarly fluid schedule as part of a concept known as Continuous Capability Development and Delivery (C2D2).

"The program is asking Congress to authorize and appropriate funds for Block 4 without insight into its complete cost, schedule, and technical baselines," GAO said. "Furthermore, once Congress appropriates these funds, DOD would be able to award a contract, beginning a long-term commitment to Block 4, the costs of which are not fully understood."

Significant internal hardware changes will only add to the program's complexity and make it more difficult and expensive to sustain an aircraft that has already proven to be especially expensive in this regard. It could also make it harder to field units with jets that all have the same level of capabilities. This, in turn, could easily lead to indirect cost growth, either due to the need for upgrades to older aircraft, the decision to sideline existing types in less demanding roles, or due to lost availability from complications during routine and heavy maintenance.

None of this is to say that the upgraded sensors aren’t important to maintaining the F-35’s qualitative edge and are badly needed improvements over systems that have become increasingly outmoded over the course of the project's lengthy development cycle. But whether or not they will truly be able to lower the price of operating the stealthy jets in the long term remains to be seen.

“In its rush to cross the finish line, the program has made some decisions that are likely to affect aircraft performance and reliability and maintainability for years to come,” the GAO’s latest review said. “If reliability targets are not met, the military services and the taxpayer will have to settle for aircraft that are less reliable, more costly, and take longer to maintain.”

Lockheed and Raytheon, as well as the U.S military services operating the jets, will have to make sure they have an especially well-defined plan to add in the new sensors to future aircraft and to make the best use of existing jets in order to avoid exacerbating these issues.