Shielded from gunfire, roadside bombs, and chemical attacks, the designers say the modular vehicle can take on various battlefield roles.

Amid a surge in interest around the world in lightweight combat vehicles, including in the United States and Russia, Israeli firm Carmor has unveiled a new modular design it says will be able to fulfill a wide variety of different roles. The engineers behind the project say that the Mantis vehicle family, which will be available in 4x4 and 6x6 configurations, is like a Lego kit and could serve as anything from reconnaissance and fast attack vehicles to command and control platforms and even self-propelled artillery pieces.

The prototype Mantis will make its debut public appearance at the biennial Eurosatory defense and security trade fair in Paris, which begins on June 10, 2018. Since May 2018, Carmor has been releasing images and details about the vehicles to hype up the design. It appears to be the company's first new offering in more than three years.

“The development of the Mantis Family answers the global demand for lightweight vehicles with improved capabilities in the field,” Carmor CEO Eitan Zait said earlier in June 2018, according to Defence Blog. “These new vehicles provide a range of solutions and capabilities together with a unique ergonomic design that do not exist in any other lightweight armored vehicle.”

The initial 4x4 version that Carmor has a general shape reminiscent of suped-up all-terrain vehicles with a futuristic looking body on top, but is substantially bigger. From what we know so far, the Mantis appears to be sized somewhere in between large ATVs and militarized commercial pickup trucks and sport utility vehicles.

The firm says that this monocoque armored shell is the centerpiece of the vehicle’s new, proprietary chassis. The composite armor reportedly gives the vehicle a high degree of protection relative to its weight and bulk, but so far there is little information on what type of threats it is supposed to stop. It has a special “floating floor” shape to deflect the blast from mines and roadside bombs, too.

Carmor says its armored body is also air-tight and features an air-purification system, giving it the ability to protect the crew against chemical or biological attacks. The design also buries the 360-horsepower Cummins V6 turbo-charged diesel – a significantly more powerful engine that one often finds in vehicles of this type – deep inside the body, shielding it from enemy fire and lowering the vehicle’s thermal signature.

There is no word yet on how fast the 4x4 model can go, but the Israeli manufacturer says the complete vehicles will be no more than 10 tons and potentially as light as 3 tons, depending on their configuration. It’s not clear if those specifications extend to the proposed future 6x6 model, which would likely be a much larger vehicle overall.

There was also a deliberate, aesthetic element to the development process. The resulting design that looks like it could be at home in a science fiction movie or television show about a dystopian near-future and that was apparently by design.

Mantis “was also a way of proving, while we were at it, that armored vehicles don't have to be ugly by bringing in the world of aviation with a driver's position that resembles a cockpit on the one hand and sports cars on the other, thanks to a silhouette with a lot of mass sloping downwards in the front,” Amos Boaz, the vehicle’s chief designer, told Israel’s Ynet News in May 2018. “One of the earliest things we had in mind when we started to plan the vehicle out was to create an element of surprise with a unique design that's different from the rest of the clunky, squared armored vehicles.”

Carmor’s previous products have had a much more conventional look to them. Previously known as Hatehof, the company has been armoring trucks for the Israeli military and other customers since before the country officially came into existence. One of its best-known designs, the Wolf, is a heavily modified Ford F-550-series truck with a very angular armored body kit and other improvements.

But the design concept doesn’t make the Mantis any less flexible a vehicle. The 4x4 family will be available in three main configurations, a “pickup truck” type with an armored cabin for a crew of three, a crew-cab version with space for five people inside, and a large, “open buggy” with the ability to carry up to eight individuals. In the latter case, “open” refers to the available space inside the vehicle and personnel will still be seated inside an armored shell.

And despite Carmor's insistence on referring to the Mantis as a buggy, it is really not in the same class as those type of lightweight vehicles. The 6x6 type will have space for as many as 13 personnel, including the driver, which could allow it to function as a small armored personnel carrier, armored ambulance, or command vehicle. Concept art of these vehicles shows a raised rear body section that could make it easier for personnel to move around inside, too.

The company has only shown the 4x4 pickup configuration so far, fitted with a remotely-operated, retractable mount at the rear. The debut example has a remote weapon station armed with a .50 caliber M2 machine gun in this position, but it is almost certain that this could accept different types of weapons or even other equipment, such as an electro-optical and infrared camera turret or other sensor packages. Gili Hacohen, who oversaw the development of the Mantis, told Ynet in May 2018 that the goal was for the vehicle to easily reconfigurable “just like Lego.”

The folding mount would allow the vehicle to move around in as discreet a configuration as possible. The crew could then look over terrain or other obstacles while remaining largely concealed, allowing them to better perform reconnaissance and surveillance missions.

With a guided anti-tank missile in that position, the vehicle could engage in shoot-and-scoot attacks on larger armored vehicles from behind cover, too. It is very possible that the chassis, especially in the 6x6 configuration, may even be robust to carry some sort of small, mobile artillery piece.

One of the most obvious options would be Israeli firm Elbit’s Spear Mk 2 120mm mortar. This weapon has an advanced recoil system that makes it a practical option to fit on the back of various light trucks. There is also computer-aided targeting equipment available that significantly improves its accuracy and reduces the time it takes for a crew to engage a target after receiving a request for support.

Various other similar weapon systems are available on the open market, including Spain’s EXPAL Integrated Mortar System, or EIMOS, and the American Hawkeye 105mm low-recoil howitzer. U.S.-backed Kurdish forces in Syria have received the former weapon in a vehicle-mounted configuration, giving them an important mobile fire-support system in their fight against ISIS terrorists.

That collapsible mounting arrangement might make the Mantis suitable for transport inside various fixed-wing cargo aircraft, reducing the time and effort it might take to get the vehicle ready to go and not necessarily requiring troops to reassemble anything at the destination. U.S. special operations forces, in particular, have long been interested in acquiring a lightweight vehicle that can fit inside various planes and helicopters, but drive straight off in a combat ready configuration. Even with the mount retracted, the vehicle would almost certainly be too tall to fit inside even large transport helicopters, though.

The diversity in potential mission sets, as well as the ability to rapidly customize the design to meet a customer’s particular requirements, could make Mantis broadly appealing to both military and other security forces – the prototype has a light brick more commonly associated with police tactical and riot control vehicles. The common family of vehicles could also reduce operating and maintenance costs for any organization looking to acquire a fleet of various types with various weapons and other mission systems.

As noted, one immediate customer could be U.S. special operations forces, who are in the market for new and advanced lightweight vehicles. The U.S. Marine Corps and U.S. Army are also investigating similar platforms to improve mobility during expeditionary and airborne operations where it might be difficult to effectively operate larger, traditional military vehicles.

At the same time, Mantis is entering an increasingly jam-packed market. Another Israeli firm, Plasan, recently unveiled the Yagu, a much smaller vehicle that offers an especially lightweight option with an advanced composite armor package. General Dynamics has just expanded their line of Flyer lightweight combat vehicles with a multi-purpose pickup type, as well. This is to say nothing of new developments elsewhere in the world.

Carmor's vehicle is still smaller than many "light" tactical trucks, such as the ubiquitous Humvee and it is miniature compared to more common mine-resistant vehicles, such as the U.S. military's new Joint Light Tactical Vehicle. With at least some ability to withstand bomb blasts, it could be a much more mobile alternative to these vehicles or those in similar weight classes.

Carmor’s offering is clearly aiming to set itself apart based on its ability to perform so many different missions using a large number of common components. It will definitely be interesting to see what additional configurations the company pitches publicly and how any initial customers end up employing the vehicles operationally. 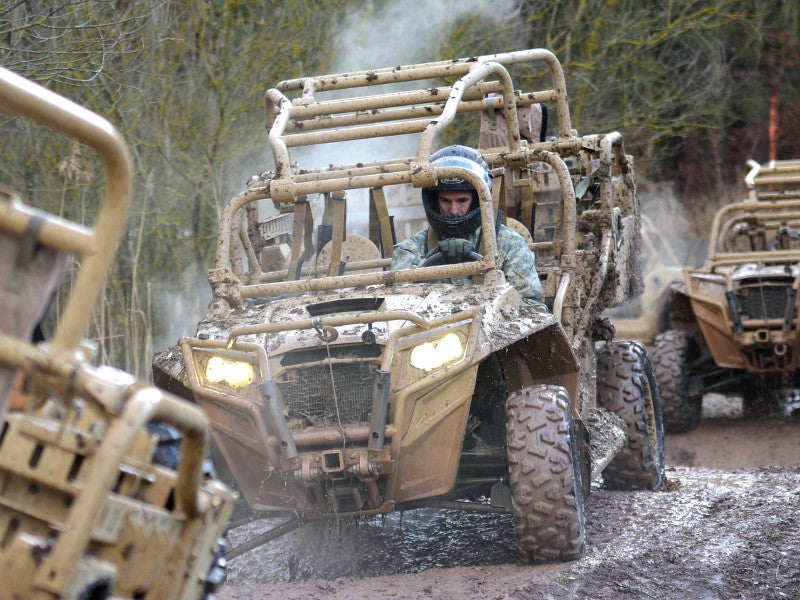 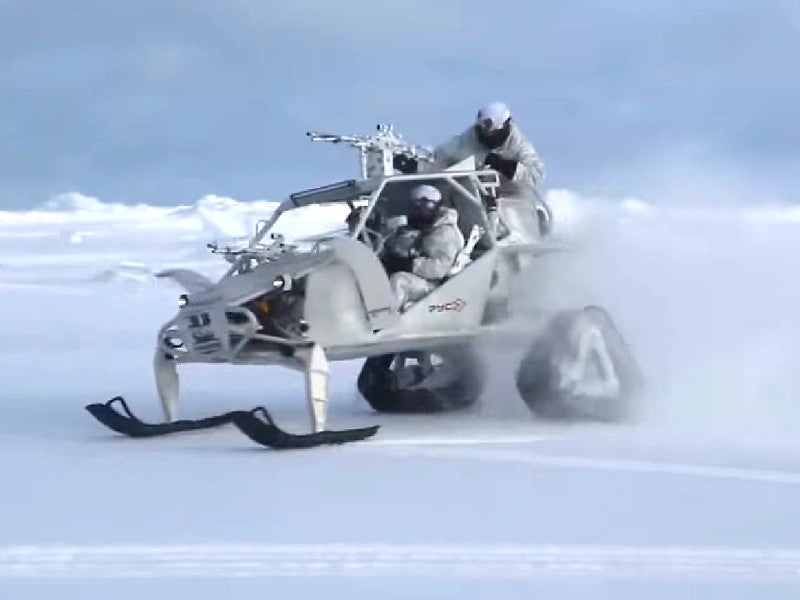 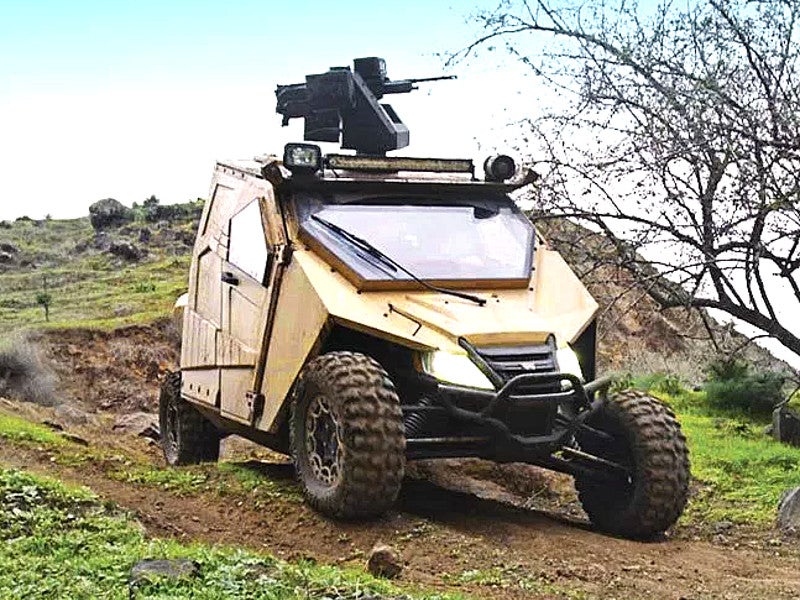