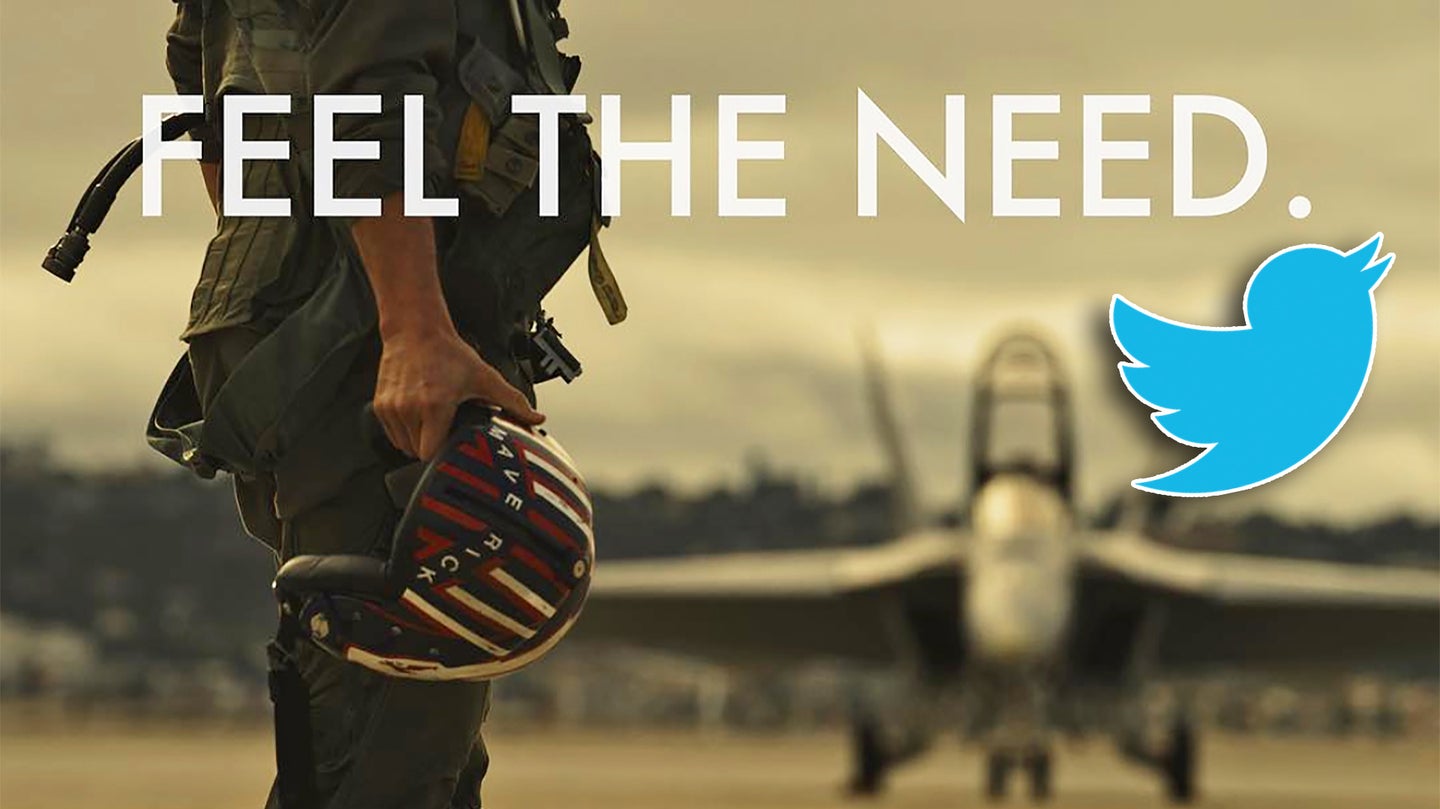 Tom Cruise dropped one hell of a viral image today on his Instagram account to promote the long-awaited sequel to Top Gun. It showed Cruise, Maverick hamlet in hand, gazing toward an F/A-18F Super Hornet with "FEEL THE NEED." written across the image. The post was hashtagged #Day1, indicating that Cruise's second fighter jet-themed Hollywood adventure has just begun.

The sepia-toned photo came from Paramount's marketing department, with the brand's logo branded at the bottom. The teaser sent social media into a frenzy, with 'defense Twitter' having an especially good time with the post—although some takes landed far better than others.

Apparently, the Navy made Naval Air Station North Island available for production this week and that's where the photo was shot:

The USAF took advantage of the announcement to poke a bit of fun at the Super Hornet's less than outstanding high-speed performance:

The Navy was quick to opine to the USAF's social media taunt, but the guys and gals in blue came back with a withering counterpunch:

Raytheon, on the other hand, failed miserably by actually posting a picture of an F-15E instead of a Super Hornet:

Dave Brown, an editor at the Washington Examiner, rightfully pointed out that Mav hadn't really crushed the Navy's promotional structural over the last three decades, even after shooting down a bunch of MiG-28s:

David Larter had an even better plot idea regarding Maverick's rank:

But The Washington Examiner's take on how the F-35 fits into the whole Top Gun 2 equation was less than stellar, as I pointed out in my own Twitter post:

And quite frankly, we really don't know what jets will be featured and how in the screenplay, and apparently neither does the Navy!:

In fact, according to Task & Purpose, the Navy has only approved two days of shooting thus far for the project and is waiting to review a final script.

Regardless, the F-35 program doesn't seem upset with the production at this point in time:

Still, Stephen Trimble sarcastically predicts an all too common manufacturer dispute is on the horizon over the film's starring jet:

Some think the film should reflect the less glamorous realities faced by the Navy these days:

@Toroonthemove had an ominous warning of what may be in store:

And of course huge penises drawn in the sky were bound to come up:

As to what scenes Cruise was filming at NAS North Island, it looks like we might get a recreation of the iconic motorcycle/Tomcat scene from the original film which was also shot on an airfield near the runway. In that case, the location was NAS Miramar, then the Navy's coveted 'Fightertown USA,' which now belongs to the Marine Corps:

There was speculation that seemed to have some factual support behind it that Top Gun 2, now titled Top Gun: Maverick (seems obvious), would be about humans in the cockpit versus drones. That movie has already been made and it's called Stealth, but thankfully it seems as if the Top Gun 2 production team has since stepped away from that plotline. And it's not as if there aren't plenty of other ideas to work with, including this idea I posited four years ago.

Another outstanding question is whether or not the film will feature the amazing aerial footage that the original so brilliantly showcased—you can read all about how that footage was shot by a Topgun instructor who was part of the production by clicking here. Or—GASP!—will it be a CGI filled affair like we have become so accustomed to? Without real aerial photography—which is far easier to obtain nowadays through companies like Wolfe Air and GoPro like action cams—the film won't have the same winning texture. And then there is the question of the soundtrack? Who will step in to fill Kenny Loggins shoes?

All these questions and more will be answered—for better or worse—on July 12th, 2019 when Top Gun: Maverick hits theaters.