The company doesn't plan to build a full-scale prototype unless it wins the competition, but is testing critical components of the design. 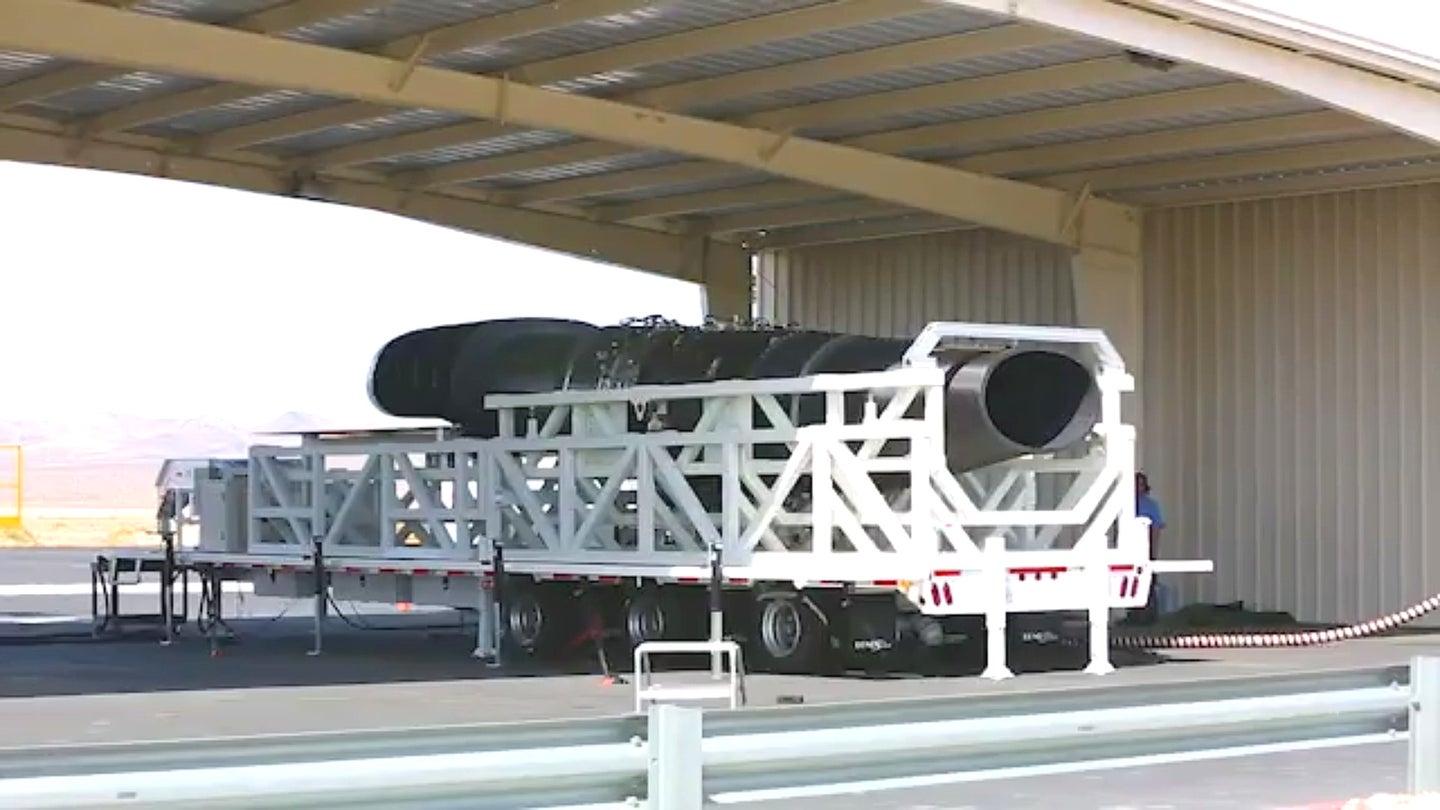 General Atomics has released a video of a test of the Pratt & Whitney PW815 turbofan that will power its entry for the U.S. Navy's MQ-25 Stringray drone tanker competition. The demonstration comes as the service gets closer to finally picking a winning a design for what could be its first carrier-based unmanned aircraft.

Though the California-based drone maker only released the clip on May 31, 2018, it says that the PW815 test occurred on April 5, 2018. For the event, General Atomics Aeronautical Systems, Inc. (GS-ASI) engineers attached inlet and exhaust components from its still-in-development MQ-25 design to the turbofan, which was fixed to a trailer on the ground. They then turned on the engine and gathered unspecified data about its performance. According to General Atomics and Pratt & Whitney, the experiment was successful and met all of the desired test points.

"Through the superb efforts of personnel from both companies, we were able to move the test date forward by almost two months, from the originally scheduled date in late May,” David Alexander, GA-ASI's President of Aircraft Systems, said in an associated press release. “This is just another example of how we are working to reduce risk and accelerate capability."

The PW815 is an efficient, gearless, high-bypass design that Pratt & Whitney developed primarily as an engine option for business jet-size aircraft. Gulfstream, so far, is the primary customer, having selected the turbofan for its new G600 aircraft.

"GA-ASI ... selected the PW815 engine for the MQ-25 based on its exceptional performance and fuel efficiency," Alexander added in his press statement. "This performance and efficiency will subsequently translate into more available fuel for the receiving aircraft. Additionally, initial studies have shown the PW815 is well-suited for a carrier environment.”

The PW815 is notably more powerful than the engines that Boeing and Lockheed Martin plan to use on their MQ-25 entries. Boeing's design has a Rolls-Royce AE 3007N, similar to the engine in Northrop Grumman's RQ-4 Global Hawk drone and capable of providing around 9,000 pounds of thrust. A General Electric F404, which generates about 11,000 pounds of thurst, would power Lockheed Martin's proposed aircraft.

Pratt & Whitney's engine has a maximum thrust of around 16,000 pounds, putting it in an entirely different class than the other two engines. In addition, General Atomics' overall concept features a very traditional intake with a vertical splitter that would provide good airflow to maximize the turbofan's performance.

It is a decidedly lower-cost and potentially low-risk approach to the Boeing and Lockheed Martin proposals. Those companies have put forward what appear to be aircraft with a greater emphasis on low-observability. Boeing, in particular, using a notably complicated flush inlet arrangement in its design, but stealthy air intakes are complex affairs in general.

Though General Atomics' considerable experience with the Avenger, also known as the Predator C, clearly inspired its MQ-25 design, and it shares a similar engine intake and exhaust arrangement, the new design has few, if any significant stealth features. Based on the available concept art, the aircraft would also appear to have a broadly similar configuration to the Global Hawk.

General Atomics' configuration, especially the engine arrangement, could let its Stingray concept exceed the Navy's basic performance and range requirements and provide the service with an especially big flying fuel truck, as well as be a cost-effective alternative to its competitors. But with so much extra thrust, it's hard not to wonder if the firm expects its design will also be larger and heavier to begin with than its competitors, too.

While General Atomics was the first of the competitors in the MQ-25 program to offer a glimpse of its design in October 2017, but has still not unveiled a full-scale mockup or prototype. In April 2018, around the time of the engine test, the firm told then Aviation Week reporter James Drew that it had no plans to build a flying example of its drone unless it won the contract.

The company has used an existing Avenger as a surrogate to evaluate technologies that will help Navy personnel move the final Stingrays around a carrier deck. Still, the company has repeatedly expressed confidence in its proposal and It is also worth noting that Boeing says it will partner with GA-ASI on its design it that company wins. So far, though, the Chicago-headquarter planemaker has kept the team coordinating that potential collaboration separate from the individuals working on its own MQ-25 proposal.

Still, the GA-ASI's decision not to pursue a flying prototype has seemed somewhat curious. As our own Tyler Rogoway wrote in April 2018:

It's worth noting that the MQ-25 tender does not require competitors to put forward a flying prototype, but the Navy is not prone to taking very high developmental risks with its tactical aircraft fleet. The more risk reduction work a contender has done the better they are likely to be off. This is especially true considering the longevity of the MQ-25  program may be somewhat in doubt and major cost and timetable overruns that occur after the contract is awarded could sink the program fully.

The fact that General Atomics isn't going to roll out an actual prototype is somewhat surprising to me, as during my interview with the company's project manager I got the impression that this was indeed the plan. Maybe things changed or maybe the engine test stand was deemed enough of a prototype going forward.

General Atomics' test run of the PW815 with the fittings it would use on its prototype MQ-25 show that it is pursuing significant development of the aircraft even if it doesn't plan to build a complete aircraft before the contract award. As noted the company has extensive experience building unmanned aircraft already and it likely that it has established and sophisticated methods to model at least some of the potential performance of future designs digitally without necessarily having to physically construct one.

The firm had employed software-based simulations during its development of the Sea Avenger for the Navy's abortive Unmanned Carrier-Launched Airborne Surveillance and Strike (UCLASS) program, which preceded the present iteration of the MQ-25 project, to help rapidly alter the design configuration to meet changing requirements. General Atomics could easily build actual sub-scale models for aerodynamic and other testing, as well.

But there are still questions about how serious the Navy necessarily is to the program itself, which I explored in February 2018:

Unfortunately, at present, the firm or firms that win the MQ-25 engineering and development contract would get a guaranteed order of just four aircraft over at least the next six years, and possibly longer. That need to commit significant time and money up front developing an unmanned system that the Navy might not ultimately buy at all in significant numbers – the service says it reserves the right to abort the project and start again if the drones don't live up to expectations – is likely a major reason why Northrop Grumman dropped out of the competition entirely.

And this six-year schedule is only if the program continues as planned. As noted, the actual delivery schedule calls for the contractor to supply just half the already tiny number of aircraft within three years. With how many times the Navy's unmanned carrier projects have morphed over the past decade, it's not hard to imagine shifting priorities yet again in a three to six year time frame. The social realities within the naval aviation community with regards to a future full of high-end unmanned aircraft flying from carrier decks is also a glaring issue few like to discuss.

General Atomics' strategy of using surrogates and testing of critical components, along with the likely use of modeling, physical or otherwise, ahead of the contract would seem to make sense in this context. The Navy's plans don't even require an initial test flight of the winning design before 2021.

The Navy has said it expects to award the MQ-25 contract by the end of Summer 2018. At that point, we'll have a better idea if having a full-up prototype had a significant impact on the process or whether demonstrating that important parts of the design work was enough for the service's contracting officials.