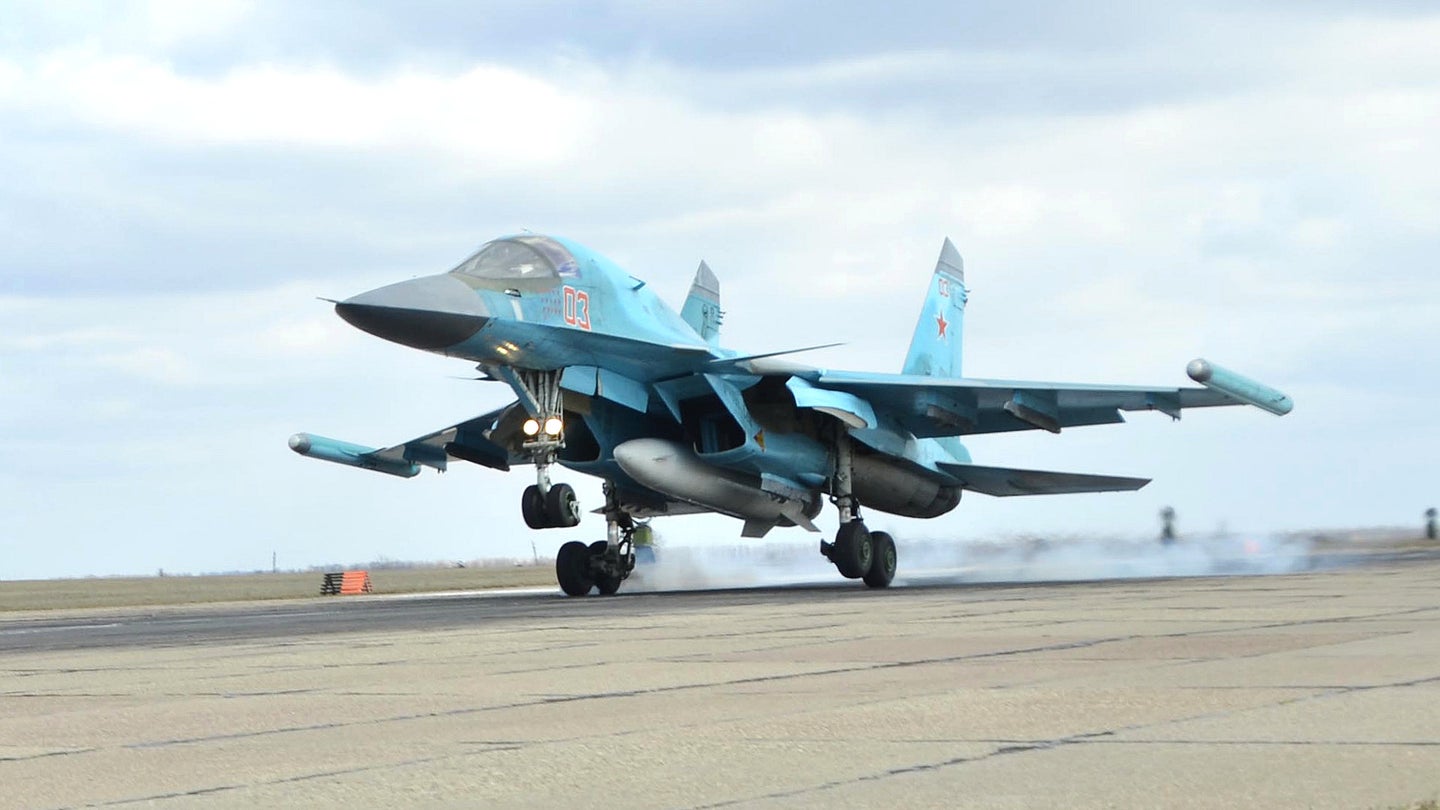 The Russian military has denied that its combat aircraft intercepted Israel’s jets over Lebanon. The rumor emerged as the two countries appear to be looking for common ground on the situation in neighboring Syria and Iran’s presence in that country, but any Israeli deals with Russia could put them at odds with their key ally, the United States.

On May 28, 2018, Israel’s “Hadashot” television news program reported that Russian Su-34 Fullback combat jets had driven off a pair of Israeli Air Force (IAF) F-16 fighter jets over the Lebanese city of Tripoli, citing Lebanese and Russian sources. Russia’s Ministry of Defense subsequently categorically disputed the story. Israeli officials have not commented on the matter.

“Reports circulated by an Israeli news website about alleged ‘interception’ of two Israeli F-16 planes by Russian Su-34’s in the airspace over Lebanon are dilettantish nonsense,” the Russian Defense Ministry said in a statement, according to state-run outlet TASS. “The Su-34 multirole bombers of the Russian taskforce in Syria are not used to intercept aerial targets and perform no missions in Lebanon’s airspace.”

The claim appears to be based in part on unconfirmed video that circulated reportedly showing Su-34s flying over Lebanon. The clip did not show any Israeli aircraft and “Hadashot” suggested that the Russian aircraft could have been participating in a drill. This would make sense since still images appeared to show one of the Fullbacks carrying an anti-ship cruise missile and there were indications that the aircraft were actually offshore in the Eastern Mediterranean at the time. There's no indication that Russia's military aircraft have or would have any reason to just transit through Lebanese airspace.

It is true that since the beginning of 2018, Israel has launched a significant number of airstrikes into Syria, including a massive operation against dozens of Iranian-operated sites, or those occupied by its proxies such as the Lebanese group Hezbollah earlier in May. In many cases, Israeli aircraft have flown into the country via Lebanese airspace or used it to launch stand-off attacks. Russian jets have transited over Lebanon, as well.

More recently, the Israeli Air Force showed a picture of an F-35I Adir stealth fighter flying in the Eastern Mediterranean near the Lebanese capital Beirut. This picture, which subsequently leaked out to the public, accompanied a presentation in which IAF commander Major General Amikam Norkin announced the jets had flown their first combat missions.

At the same time, Russia has made a number of outlandish claims and denials about its activities in Syria, as well as those of forces aligned with the country’s dictator Bashar Al Assad. In April 2018, the Russian Ministry of Defense insisted, without providing any actual evidence, that Syrian Air Defenders had knocked down 76 incoming cruise missiles during a combined U.S., British, and French missile barrage against chemical weapons sites in the country.

But in this case, it is definitely reasonable questioning that the Russian contingent in Syria would commit its limited number of relatively advanced Su-34 strike aircraft to intercept Israeli jets over Lebanon. It also has a number of MiG-29SMT, Su-30SM, and Su-35S fighters at its Khmeimim outpost in Syria’s Latakia governorate, any which would be better suited to this task.

In addition, so far, Russia has not used its planes or ground-based air defenses to challenge any Israel’s strikes into Syria. The two countries reportedly have a hotline to help deconflict their military activities in the region, similar to the one Russian and U.S. military personnel use for the same reasons.

“We do not coordinate [with Russia],” a senior Israeli military officer said, according to The Times of Israel. “It’s about deconfliction and security measures, so they don’t harm us and we don’t harm them.”

Most importantly, though, Israel and Russia appear to be growing their ties and making important deals over the future of the conflict in Syria. The same Israeli military official that spoke to The Times denied that the two countries are actively cooperating, but it is hard to see a number of recent developments, including alerting Russian officials to forthcoming strikes against Iranian targets, any other way.

“Of course, the withdrawal of all non-Syrian forces must be carried out on a mutual basis, this should be a two-way street,” Russian Foreign Minister Sergei Lavrov said at a press conference on May 28, 2018, in what appeared to be a statement pointed at both the United States and Iran. “The result of this work which should continue and is continuing should be a situation when representatives of the Syrian Arab Republic’s army stand at Syria’s border with Israel.”

This is not the first time Russia has suggested Iran should leave Syria. Earlier in May 2018, Russian President Vladimir Putin, who has had a number of meetings recently with Israeli Prime Minister Benjamin Netanyahu, made similar remarks.

But separate reports suggested that this new statement was reflective of an actual agreement that Israel’s Defense Minister Avigdor Lieberman came to with his Russian counterpart, Sergei Shoigu, earlier in May 2018. Under the arrangement, Israel would acquiesce to Assad reasserting his control all the way to the boundary with the Israeli-occupied Golan Heights in exchange for keeping Iran’s forces and Iranian-backed militias at least 35 miles away from the border.

Israeli officials, including Lieberman and Netanyahu, have repeatedly stressed that their government sees the Iranian presence in Syria as unacceptable. It has also been readily apparent that Israel sees Iran as its chief security concern and that it is willing to take any steps necessary to challenge its expansion in the Middle East and elsewhere.

The reported plan comes as reports continue to appear that point to increasing tensions between Russia and Iran over Syria. This makes sense given that Iranian actions have repeatedly prompted Israeli retaliatory strikes, which have in turn drawn in Assad’s air defense forces.

The Kremlin has invested significantly in its own air and naval facilities in Syria, which it views as immensely strategic. The concern would be that Iran’s growing conflict with Israel could threaten Assad’s future and Russia’s ability to remain in the country.

There is some indication that Syrian officials may be increasingly tired of being on the receiving end of Israeli strikes focused on Iranian interests, as well. Earlier in May 2018, a newspaper linked to Syrian opposition groups claimed that the Syrian Arab Air Force had demanded Iran and its proxies vacate its bases, which have repeatedly come under Israeli attack.

For its part, Iran has publicly rebuked the Russians and noted that both countries are there at the behest of Assad’s regime. Syria’s Deputy Foreign Minister Faisal Mekdad has said it has no intention of forcing the Iranians out.

“This topic is not even on the agenda of discussion, since it concerns the sovereignty of Syria,” Mekdad told Russia’s state-run outlet Sputnik on May 23, 2018. “We cannot let anyone even raise this issue.”

Whatever the exact state of the triangular relationship between Syria, Russia, and Iran is at present, it is even more complicated in the overall context of the conflict in Syria. Specifically, any Israeli deals with Russian officials focused on containing Iranian interests could bring them into conflict with the United States and its other regional allies.

The U.S. government, which is seeking to contain both Iran and Russia in the region and keep the pressure on Assad to either step aside or accept some sort of power-sharing agreement to end his country’s brutal civil war, is opposed to the regime in Damascus reasserting itself near the Israeli-Jordanian border. In 2017, U.S. President Donald Trump and Putin agreed to a so-called neutral “de-escalation zone” in these areas to create a de facto ceasefire between American-backed Syrian rebel forces and pro-Assad elements.

On May 25, 2018, the U.S. State Department issued an unusually strong statement that warned Assad and his partners against advancing into the border region in contravention of the de-escalation agreement. The remarks, attributed to the Department’s top spokesperson Heather Nauert, said the United States would pursue “firm and appropriate measures” if Assad went ahead with the reported planned offensive into the area and called on Russia to use its leverage over the Syrian government to dissuade it from doing so.

Previous attempts by the United States to use Russia as a conduit to pressure the Syrians, or forces aligned with the government in Damascus, into changing their plans have been almost uniformly unsuccessful. Most notably, the U.S. military attempted to make use of a hotline to try and call off an attack by shadowy, Kremlin-linked Russian mercenaries and pro-Assad militiamen across the formal, but dubiously effective "deconfliction line" separating U.S. and Russian activities in Eastern Syria in February 2018.

The officials on the other end insisted that those forces were not part of the Russian military and that they had no authority to order them to withdraw. American forces, and their predominantly Kurdish local Syrian partners, subsequently killed hundreds of mercenaries and militiamen in the ensuing counterattack, which involved air strikes and artillery fire.

It’s not clear whether or not the U.S. government’s position on Assad’s forces returning to Southern Syria, or the Israeli-Russian deals that could facilitate that, has changed in part or in full since Nauert’s remarks earlier in May. The United States and Israel have made a number of moves to cement their own relationship as of late, including the immensely controversial decision to move the U.S. Embassy into the hotly contested city of Jerusalem.

But if the U.S. military does come under threat from Syria’s forces, there is every indication that it will defend itself to the fullest extent possible. American troops near the Jordanian border have called in air strikes against advancing Iranian-backed militias in the past. Those aircraft have also shot down Iranian drones in the area.

If this happens, but Russia is unwilling to help to avoid a broader, direct conflict with the United States, Iran might rush to the aid of any pro-Assad troops. This, in turn, could lead to an Israeli response, which might precipitate a larger conflagration and a breakdown in various arrangements.

On top of that, with so many different parties potentially operating in such a relatively small area, and doing so under different command structures and without immediate coordination between them, it’s not hard to see how there might be risks of unintended skirmishes. Fighting between Russian or Iranian forces and American personnel directly could have serious ramifications throughout the region and beyond.

There is a remote possibility Russia’s growing ties with Israel, as well as its potential animosity toward Iran, could give the United States an incentive to try and improve its own relationship with the Kremlin as part of its push to isolate the regime in Tehran. Trump has often said he wished his administration could develop a better relationship with its counterparts in Moscow.

It’s not at all clear if the Trump administration could make this diplomatic push after pulling out of the controversial multi-national deal over Iran’s nuclear program. Russia has made clear that it continues to support the agreement, formally known as the Joint Comprehensive Plan of Action, and will continue to work to implement it with or without the United States.

It's almost certain that such rapprochement is politically untenable for a host of other reasons at present. These include Russia's meddling in America's electoral system and political discourse, as well as its outright threats and hostile actions against the United States and its allies.

No matter what happens, it seems clear that, once again, the conflict in Syria looks to be getting even more complex and multi-faceted. The many competing agendas, as always, continue to have the potential to touch off a new and broader conflict where allies might find themselves pursuing competing objectives, even if they’re not fighting directly.