Trump set unrealistic expectations for the summit to begin with, but pulling out first is a grave diplomatic and strategic miscalculation. 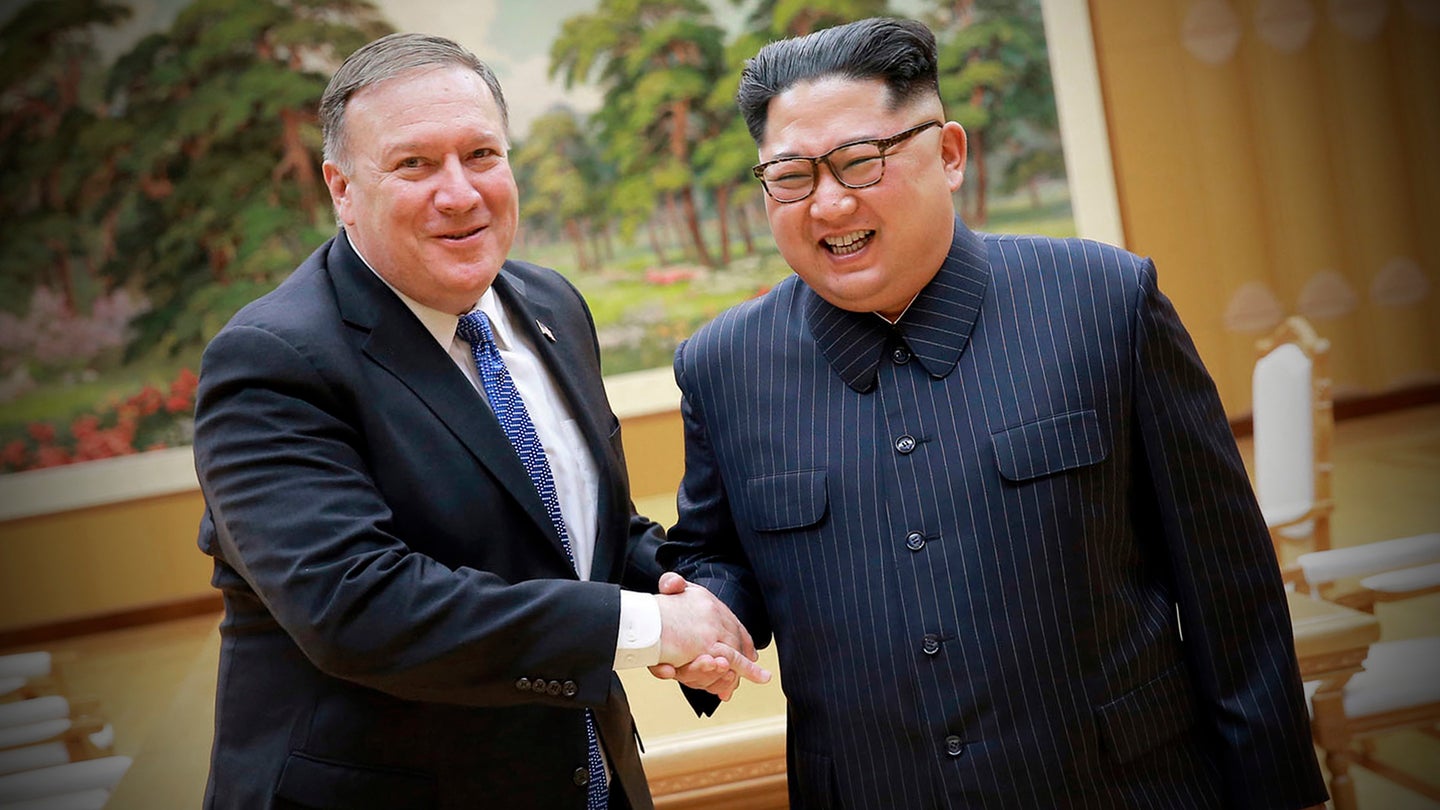 I have repeatedly lauded Donald Trump for being ready and willing to talk directly with Kim Jong Un going back to the early stages of his Presidential campaign. Now, less than three months after the President giddily accepted Kim Jong Un's request for direct talks, and the brief but dramatic thawing of tensions that followed, the President has decided to pull out of the summit via a bizarrely worded letter that lacks substantial justification. The move is a massive strategic and diplomatic misstep and makes the U.S. look weak and untrustworthy, not the opposite.

Here is the letter in full:

The tone of the letter is beyond strange and it is largely self-contradicting. It's collegial, calling Kim by his official party moniker, and thanking him for the negotiations leading up to the summit. It goes on to say that Trump was looking forward to being at the planned June 12th and meeting with Kim. Then it says the reasoning behind pulling out of the meeting is because of the "tremendous anger and open hostility displayed in your most recent statement."

Although North Korea had threatened to pull out of the talks over military exercises in South Korea, it was regarded as no big deal by the White House at the time. The statement the President is referring to comes from vice-foreign minister Choe Son Hui and was originally posted by North's official Korean Central News Agency:

At an interview with Fox News on May 21, US Vice-President Pence made unbridled and impudent remarks that North Korea might end like Libya, military option for North Korea never came off the table, the US needs complete, verifiable and irreversible denuclearisation, and so on.

As a person involved in the US affairs, I cannot suppress my surprise at such ignorant and stupid remarks gushing out from the mouth of the US vice-president.

If he is vice-president of "single superpower" as is in name, it will be proper for him to know even a little bit about the current state of global affairs and to sense to a certain degree the trends in dialogue and the climate of détente.

We could surmise more than enough what a political dummy he is as he is trying to compare the DPRK, a nuclear weapon state, to Libya that had simply installed a few items of equipment and fiddled around with them.

Soon after the White House National Security Adviser Bolton made the reckless remarks, Vice-President Pence has again spat out nonsense that the DPRK would follow in Libya's footstep.

It is to be underlined, however, that in order not to follow in Libya's footstep, we paid a heavy price to build up our powerful and reliable strength that can defend ourselves and safeguard peace and security in the Korean peninsula and the region.

In view of the remarks of the US high-ranking politicians who have not yet woken up to this stark reality and compare the DPRK to Libya that met a tragic fate, I come to think that they know too little about us.

To borrow their words, we can also make the US taste an appalling tragedy it has neither experienced nor even imagined up to now.

Before making such reckless threatening remarks without knowing exactly who he is facing, Pence should have seriously considered the terrible consequences of his words.

It is the US who has asked for dialogue, but now it is misleading the public opinion as if we have invited them to sit with us.

I only wonder what is the ulterior motive behind its move and what is it the US has calculated to gain from that.

We will neither beg the US for dialogue nor take the trouble to persuade them if they do not want to sit together with us.

Whether the US will meet us at a meeting room or encounter us at nuclear-to-nuclear showdown is entirely dependent upon the decision and behavior of the United States.

In case the US offends against our goodwill and clings to unlawful and outrageous acts, I will put forward a suggestion to our supreme leadership for reconsidering the DPRK-US summit.

This is hardly a blistering response in North Korean terms. And it actually is right to point out that Trump's own staff, namely National Security Advisor Bolton and Vice President Pence, stupidly went about comparing North Korea to Libya during such a sensitive time. Trump even had to walk back Bolton's remarks about how the North Korea deal would be modeled on the Libya deal, which clearly didn't protect the North African dictator as he ended up dying dramatically after being pulled from a drainage culvert in Sirte after weeks of U.S. and allied bombing:

I warned about Bolton's ultra-hawk stance and notoriously big mouth and how he is a major threat to a North Korean nuclear deal when Trump selected him to replace H.R. McMaster months ago.

Overall it's telling that Trump seems to think that just because both sides agreed to talk that they still aren't enemies and don't have massive differences to work out—which is the whole reason for the talks in the first place. This isn't that surprising sadly as Trump has a history of valuing superficial overtures, platitudes, and personal relationships more than concrete results.

Above all else, Choe Son Hui's statement is a reminder that North Korea has no intention of instantly denuclearizing. The Pentagon itself has concluded as much, and why would they? Especially considering the deal the White House had in mind was for 'security assurances' and possibly opening up the country to some U.S. private investment. This is hardly a 'best shot' deal full of incentives for North Korea to move down the denuclearization path and to normalize relations with its neighbors. Considering Trump's unilateral withdrawal from the Iranian nuclear agreement, America's assurances now mean nothing.

How on earth the President didn't understand this before constantly setting expectations so high is and has been baffling to watch as this crisis has progressed. Now, because he can't get total and instant capitulation from Pyongyang, it looks like he isn't interested in a more realistic alternative of gradual denuclearization and slowly ushering North Korea into the international community. And shutting down North Korea's nuclear program could never happen in an instant anyway. It would take years and a large-scale inspection and verification regime to see it through to its end.

But regardless of the motive behind pulling out, doing so makes the United States look totally inconsistent and not that interested in peace. The summit should have been used to present North Korea with the very best deal possible, one full of dramatic carrots and sticks, and backed by other key players in the region. Assurances and the possibility of some U.S. private sector investment sometime in the future is hardly a gleaming offer. All this takes focus, planning, diplomacy, and the spending of political capital, which really doesn't seem to have occurred in the weeks leading up to the historic meeting.

If Kim decides not to take such a deal, or even worse—doesn't show up—then the U.S. and its allies would have a real case for taking other routes, and military action is certainly one of them. Basically, by walking away from a highly attractive, internationally-backed 'best shot' deal, North Korea would fall on their own sword, and at least we could say we literally tried everything before going down a military route.

Instead, the U.S. is the petulant child here. We are the thin-skinned ones who walk away the second the other party doesn't act like our best buddy. Considering we are talking about a reclusive military state largely built on the threat of American military force, such little tolerance on behalf of the Trump administration makes it appear as they had no real intention of showing up at the talks in the first place.

And it was North Korea who released three prisoners into U.S. custody and who shut down its nuclear site, although the utility of that site to the regime is now next to nothing. But it's still a gesture. North Korea also met with their South Korean counterparts on multiple occasions, including the historic meeting between Kim and Moon at the DMZ. And these diplomatic exchanges have also been a rocky road, but who on earth would have thought this would be easy or smooth sailing in any form?

Don't throw "Art Of The Deal" out and claim Trump is a master negotiator. Maybe in business, but when it comes to running a government there is little evidence to support such a claim. Quite the opposite actually. Even if the meeting comes to pass, Trump's strange surprise letter and his willingness to pull out of such a critical summit damages America's credibility in so many ways.

South Korea, which has the most at stake in all of this, certainly was blindsided by Trump's move and it will only work to draw divide the two allies. It's impossible to believe that President Moon agrees with canceling the Summit over a reactionary and somewhat measured response to the Trump administration's own gaffs is a good idea. In fact, he has already commented on the news, saying:

“I am very perplexed and it is very regrettable that the North Korea-U.S. summit will not be held on June 12 when it was scheduled to be held."

What's even stranger is that Trump's letter says that if Kim changes his mind about the summit he should call or write. But Kim didn't make the decision to pull out, Trump did. It goes on to say how big of a missed opportunity this is and how canceling it is detrimental to the world, but once again, Trump is the one making the very decision he is lamenting.

In the letter, Trump once again compares North Korea's nuclear capabilities to those of the United States—an odd addition and another bizarre tone change in the strange declaration.

China is also likely factoring into this. After a meeting between Xi Jinping and Kim Jong Un earlier in the month, North Korea pulled out of a meeting with South Korea and began to state more clearly that it didn't intend to instantly denuclearize. Just before Trump released this letter, the U.S. disinvited China from its biennial Rim Of The Pacific multi-national naval wargames.

The reasoning behind that decision, according to the Pentagon, is China's actions in the South China Sea—one of the most sensitive international topics for Beijing. But nothing has really changed in regards to China's posturing there in recent days. Trump also tweeted three days ago that China may be allowing sanctioned goods to flow over the border with North Korea. Ongoing trade negotiations with the U.S. and China have also been less than constructive.

So it's very possible that Trump came to the realization that pretty much everyone else already had—Chinese President Xi Jinping is not his buddy and will leverage China's power anyway it can to check U.S. advances in the region—possibly including forestalling a much tighter U.S.—North Korean relationship.

Nobody knows what will happen next. Maybe the summit will be rescheduled, but this is another sign of an erratic and petty Commander In Chief supported by an increasingly hawkish and counter-productive group of characters, as well as a White House that has proven itself incapable of controlling its messaging even when doing so is most critical. And all of this has major consequences.

Just as the President stated himself, this is a missed opportunity and sad moment in history—one that he willingly chose to make happen and will be responsible for.