After disappearing for nearly three years, we are finally getting a better look at this 'wolf in sheep's clothing' of a warship. 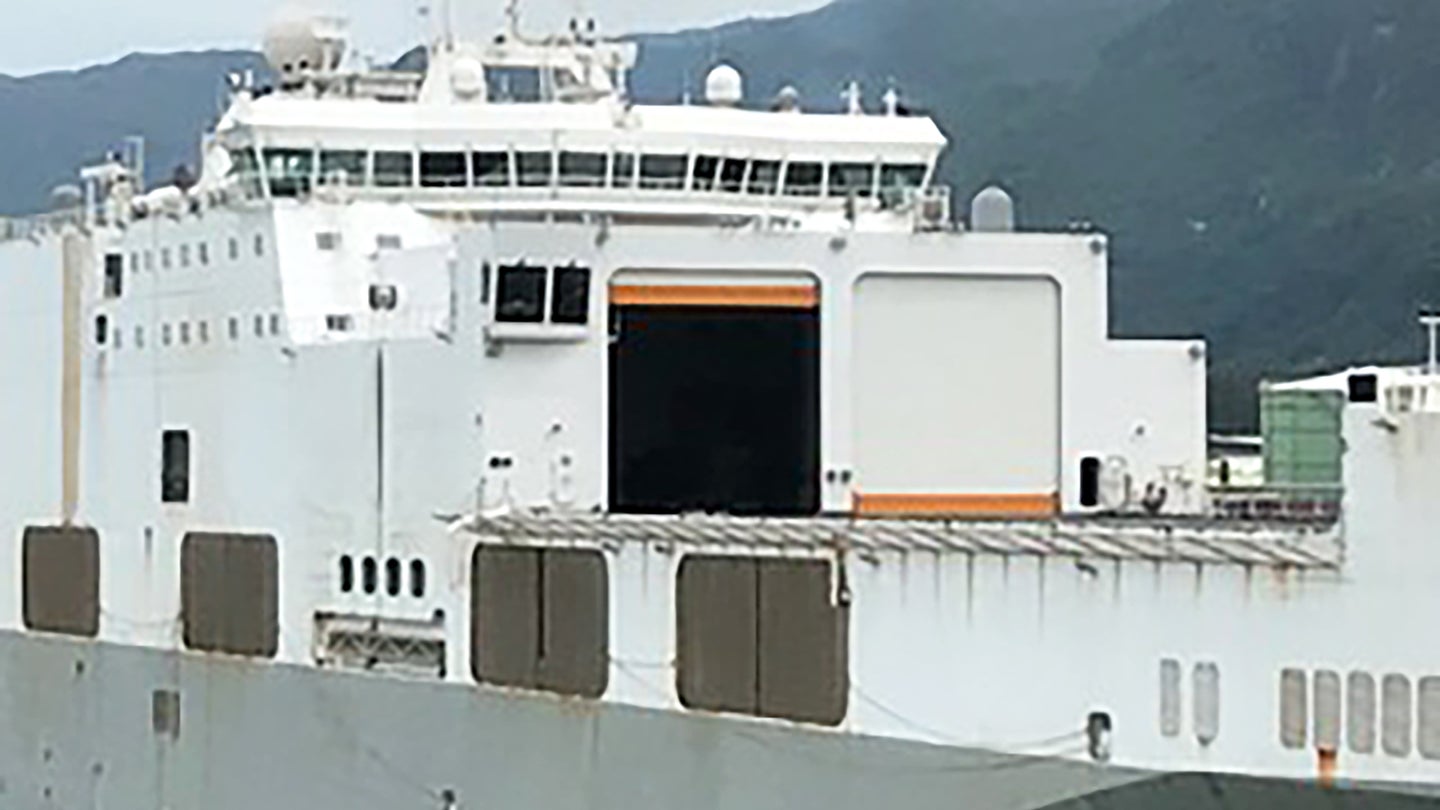 Before last week, it had been three years since MV Ocean Trader—the highly customized roll-on, roll-off freighter that was converted into a mothership and floating command center by U.S. Special Operations Command—had been photographed. That picture was taken while it was still being retrofitted for its highly specialized and shadowy mission at the soon to be defunct BAE Systems shipyards in Mobile, Alabama. Then, last Friday, The War Zone discovered a new picture of the finished vessel, taken at a remote drydock facility in Oman. Now more photos have come to light, these ones offering us our first good glimpse of the vessel's massive hangar bays and reworked superstructure.

The photos, which were posted on French defense journalist Philippe Chapleau's blog, were taken on February 27th, 2018, nearly two months after the picture was taken in Oman. The location is also important, with these photos being snapped in Victoria, on Mahé Island, the capital city of the Seychelles Archipelago.

The images show a number of the ship's unique features. In particular its huge hangar doors, which are markedly larger than those found on most U.S. Navy vessels. They seem to be more than spacious enough to easily accommodate the largest special operations helicopters in U.S. service—most notably the MH-47 and CV-22—and they could also likely fit a CH-53E Super Stallion as well.

Also clearly visible are the large apertures installed along the ship's starboard side that can launch and recover boats and other special operations craft stored inside the Ocean Trader's multi-level garage-like cargo hold. Additionally, we get a clearer view of the vessel's elaborate communications suite with multiple satellite domes dotting its upper superstructure.

Finally, just like in the last photo, a .50 caliber machine gun station can be seen on the upper deck, this time near the vessel's bow.

The location of the stealthily named MV Ocean Trader in recent months also points to its operating current area—the Arabian Sea. The vessel was built for low-intensity conflicts and supporting special operations missions, making hotspots like Somalia an ideal area for targeted operations. The ship is also uniquely suited for counter-piracy operations around the Horn of Africa as it was specifically procured and modified not to appear like a combat ship. In essence, it is the bait and the trap all in one. Supporting special operations forces in Yemen and interdicting illicit cargo heading from Iran to Houthi fighters in that country is also another possibility.

Considering it has called on ports in Oman and Seychelles, it's probable that it also calls Diego Garcia in the Indian Ocean home from time to time. The Naval Support Facility there can accommodate the ship, and there aren't any curious onlookers to deal with. Military Sealift Command, which is a principal participant in the program, has a large footprint there, with nearly a dozen prepositioning ships assigned to Diego Garcia's lagoon.

We will keep you updated as to where this 'wolf in sheep's clothing' of a combat vessel turns up next.