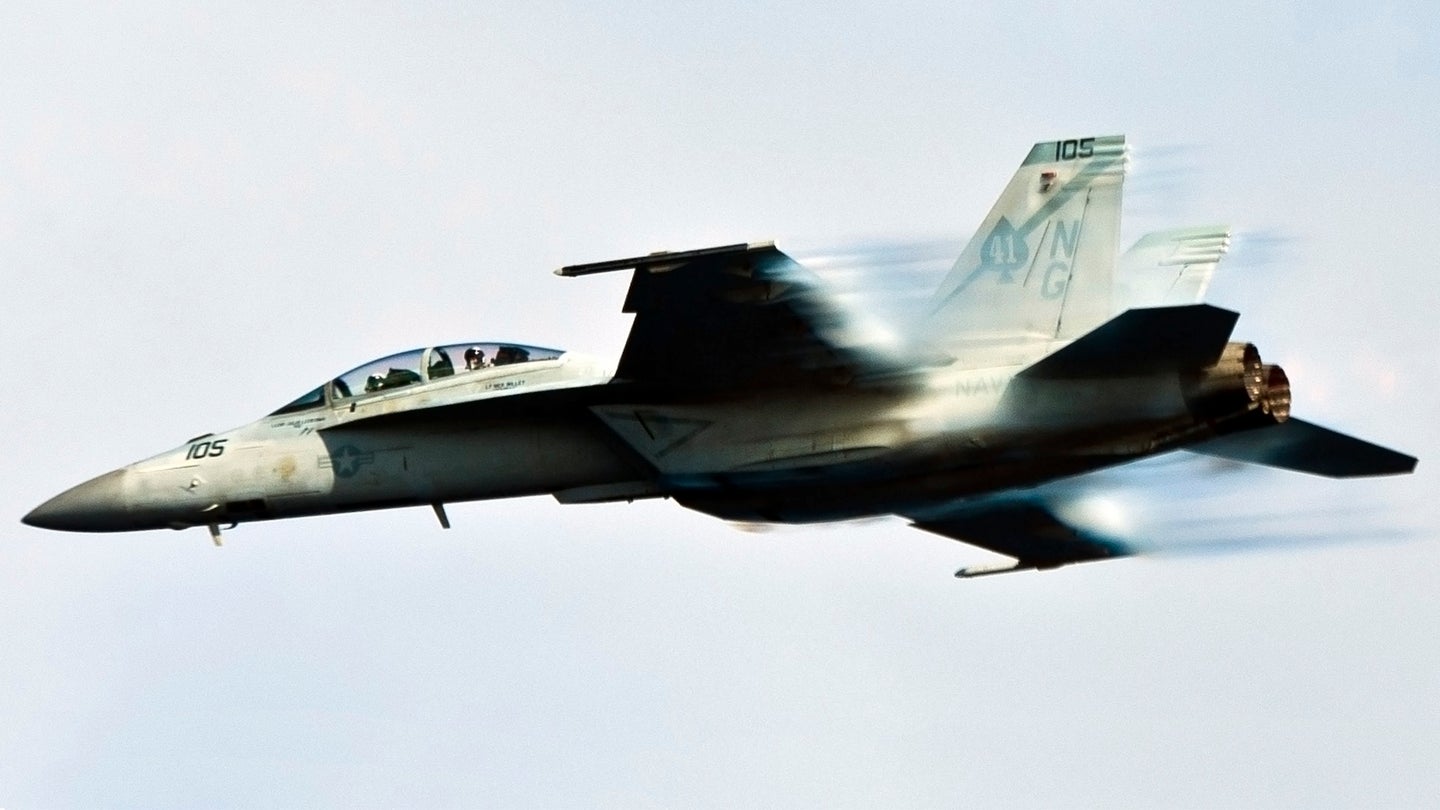 Even though the 2004 encounter between an unidentified flying object nicknamed the 'Tic Tac' and U.S. Navy Hornets made headline news last Winter via its associated with a secretive Pentagon program to investigate UFO encounters, and possibly much more, the story had been talked about in detail among military aviation circles for years. But now we have an official report that came out of the aforementioned Advanced Aviation Threat Identification Program (AATIP) that makes a number of conclusions based on its findings. Above all else, it offers far more granular detail about the now historic incident than what had previously been released.

The document comes to us via George Knapp's intrepid I-Team, which is part of Las Vegas CBS affiliate Channel 8's Newsroom. You can and should read it in its entirety by clicking here. Knapp's team explains how they obtained the document in their article, stating:

"Earlier this year, we made a whirlwind trip to Washington for a debriefing arranged by former Senator Harry Reid. While in D.C., the I-Team obtained copies of unclassified documents related to the UFO encounters, including the Tic Tac. The analysis was compiled in 2009 with input from multiple agencies. It confirms the Nimitz group had several interactions with AAV's, Anomalous Aerial Vehicles."

The 13-page report isn't dated and lacks a cover sheet, but it provides a rich recounting of the encounter, with a clear accounting of the assets and sensors involved, and how the Navy handled the incident administratively in its aftermath. The supercarrier USS Nimitz, the Ticonderoga class cruiser USS Princeton, E-2C Hawkeye airborne early warning and control aircraft, and F/A-18C Hornets and F/A-18F Super Hornets were all involved with the incident. Other ships that were also part of the Nimitz Carrier Strike Group were also likely involved but to a lesser degree.

But maybe what's most important is that it really wasn't just an incident, the report states that the objects were detected over six days, from November 10 to the November 16th, 2004. Intermittent radar detection of a number of objects near the strike group as it plowed the waters off of the Baja Peninsula showed fantastic agility. They dropped from 60,000 feet down to just above the water in a number of seconds and hovered there before zooming off "high velocities and turn rates."

Yet even with an arsenal of the most powerful air defense sensors and combat systems in the world, the objects were impossible to continuously track. The report does note that if the USS Princeton, which acts as the nerve center for the carrier strike group's air warfare mission, was in ballistic missile tracking mode it may have been able to better track the objects as the filters that throw out clutter not indicative of an air-breathing threat would not be active.

Over nearly a week, three separate events related to the mystery targets occurred, but on November 14th the phenomenon went from electronic to highly tangible. It started out around 10:00AM local time with the Princeton, callsign POISON, asking an E-2C orbiting high overhead to use its powerful AN/APS-145 radar to look-down and attempt to paint a target in a particular piece of sky that the ship was tracking.

At first, it looked like just a wave on the E-2 crew's scopes, but it turned out to be a very faint target with no velocity indication. The Princeton asked to take control of a pair of F/A-18F Super Hornets belonging to VFA-41, callsign FASTEAGLE 01, the E-2 was directing as part of a training mission. Controllers on the ship wanted to vector them to the ghost-like target in an attempt to get a better handle on what these strange radar returns were. The jets were only armed with captive training missiles.

What the pilots saw as they came within about a mile of the target was a white, featureless object—no wings, engines, control surfaces, or surface features—that measured roughly 45 feet long and looked like a flying Tic Tac. Commander David "Sex" Fravor, the commanding officer of VFA-41 and the pilot in the lead Super Hornet that day, noted that the outer shell of the craft looked like a "whiteboard." The object was low over the water which was frothing underneath. According to Fravor, it looked almost like the water was "boiling" below the object, which was moving above the water "like a Harrier." It then started moving at about 500 knots at 500 to 1,000 feet over the ocean.

The Super Hornet's own AN/APG-73 radar couldn't detect the object even at close range. The pilots relied on a Link16 target track—presumably from the USS Princeton—to help them arrive at the target. They even tried making a 'helmet lock'—using their Joint Helmet Mounted Cueing System (JHMCS) to slew the jet's sensors onto the target—but it didn't work. The aircraft did not have a targeting pod mounted on it at the time of the event.

Fravor's then tried to intercept the Tic Tac by diving down toward it but "it appeared to recognize" him and took evasive action. Eventually, it pulled into the vertical and shot away at supersonic speed. The pilots asked the Princeton if they had the object still on their radar, and they replied "picture clean" meaning no unknown radar contacts appearing on their scopes. Then moments later they chimed back in stating "you're not going to believe this, it's back at your CAP!" The object hadn't just shot away at blistering speed, it actually returned to where the Super Hornets were on station performing a practice combat air patrol before the incident began.

When the pilots returned to the ship they were questioned about their jets and their operability—they were brand new with less than 100 hours on them and worked perfectly according to the pilots. They were also asked if they had experienced any physiological issues during the flight, which they hadn't.

Word of the incident got around the carrier fast and personnel in CVIC (the aircraft carrier's intelligence center) donned tin-foil caps to greet the pilots as they showed up to debrief their UFO encounter and didn't take it seriously at first. The Super Hornet crews were not asked to sign any unique paperwork or non-disclosure agreements. The report also noted that the crews were constantly ridiculed over the weeks that followed.

Fravor has since gone on the record regarding the incident and describes his memory of it:

During the same period of time, another jet, this time an F/A-18C from the VMFA-232, was on a check flight from the ship after undergoing maintenance when controllers asked the pilot if the unarmed fighter had any weapons onboard—not a normal question while doing training off the western seaboard—and vectored the aircraft to an unknown target.

The previously mentioned pair of VFA-41 Super Hornets that actually saw the object were also heading toward the target to investigate at this time. Upon arriving in the target area, the Marine Hornet pilot didn't see the white craft, but he did spot a big disturbance on the ocean's surface roughly 150 to 300 feet in diameter. The pilot noted that seas around this foaming area were calm.

As the pilot left the scene he could see that the disturbance was dissipating. Upon debriefing with intelligence personnel, he was asked if he ever saw the "supersonic Tik Tak." He reported that he didn't. But the strange water phenomenon happened near where the Super Hornets were chasing the object and had just witnessed the "boiling" sea underneath it before it darted off.

Another Super Hornet flight from VFA-41 launched after FASTEAGLE01 landed. By then it was roughly 3 PM. The crews exchanged information in the paraloft where they suit-up and suit-down before and after missions with the hopes that the second flight would also spot the object on their training mission. Once airborne and setup on station, the tracks of identified craft began to appear via the Super Hornet's Link16 data-link terminal at roughly 30-40 miles south of their position. They could get only intermittent and faint radar returns while searching for the object with their own radar. The report describes the crew's attempts to track the target in technical detail:

Eventually, the crew was able to spot the target on with their ATFLIR targeting pod. After landing, the Super Hornet crew noted they could not confirm that this was the exact same thing the FASTEAGLE01 had seen as they never obtained a visual on it. The FLIR video captured that day has since become its own cultural phenomenon.

Overall, the report really paints a picture of how this was a larger event that impacted more people in some way than what most realize. It included three separate flights of aircraft, all of which observed the phenomenon in different ways.

What came after the aerial encounters is also of significant importance. When Commander Fravor, the lead Super Hornet pilot from the primary intercept, debriefed with the Carrier Air Wing's lead intelligence officer, they didn't know what to do with the information. If the pilot wasn't a Commander, squadron CO, and generally highly regarded it likely would have been given even less weight according to the report.

Eventually, the account and the FLIR video were sent to the captain of 3rd Fleet Intelligence, where it supposedly met a dead-end. The Captain in charge there thought it needed no further investigation because happened during training at home and he thought it "was part of a counter-drug operation based on the area of operations." The reluctance to look deeper into the incident, at least officially, seemed to be true within the upper echelons of the Carrier Strike Group itself. But the report also makes an interesting note of just how incredible this encounter actually was, and how quickly any known investigation into it died:

Another interesting aspect of this paper is that it mentions the USS Louisville (SSN-724), a Los Angeles class nuclear fast attack submarine that was also operating alongside the Nimitz. It makes note that the submarine didn't detect any unusual acoustic information or other anomalies during this whole event, even considering the churning water the craft seemed to cause.

The report makes the conclusion that the objects likely never went below the water's surface due to the submarine's lack of awareness that the event was even occurring. If it did submerge, it meant this object represented a "highly advanced capability" that could evade the submarine's ultra-sensitive sonar and hydrophones.

And that's not the only conclusion the report comes to, there are six in all:

Luis Elizondo, a former military intelligence officer that ran the AATIP program in association with contractor Bigelow Aerospace, told the I-Team that this is one of many other documented encounters that are just as impressive, but because of their classification, he can't share details about those incidents.

It's also worth mentioning that a somewhat similar, albeit less compelling incident has been disclosed. It occurred in the Atlantic 11 years later, with Hornet pilots once again being the on-scene investigators. You can read about this incident here and see the video that was published along with it below:

What's more compelling is that this report is a far less in-depth and detailed white paper than its highly classified companion, which we aren't likely ever to be able to see.

Regardless if you think the AATIP program was totally legit or some type of elaborate misinformation mechanism dreamed up in the darkest corners of the defense-industrial complex, during that week in November of 2004, something totally strange did indeed occur. And it didn't just happen in a blink of an eye, it happened over days, with the object in question being examined by a multitude of the U.S. Navy's front-line sensors as well as by the human eye of one of the best-trained and reliable observers one can imagine.