The highly-modified ship hasn't been seen for three years, but we have uncovered a new photo of it and some details as to where it's been. 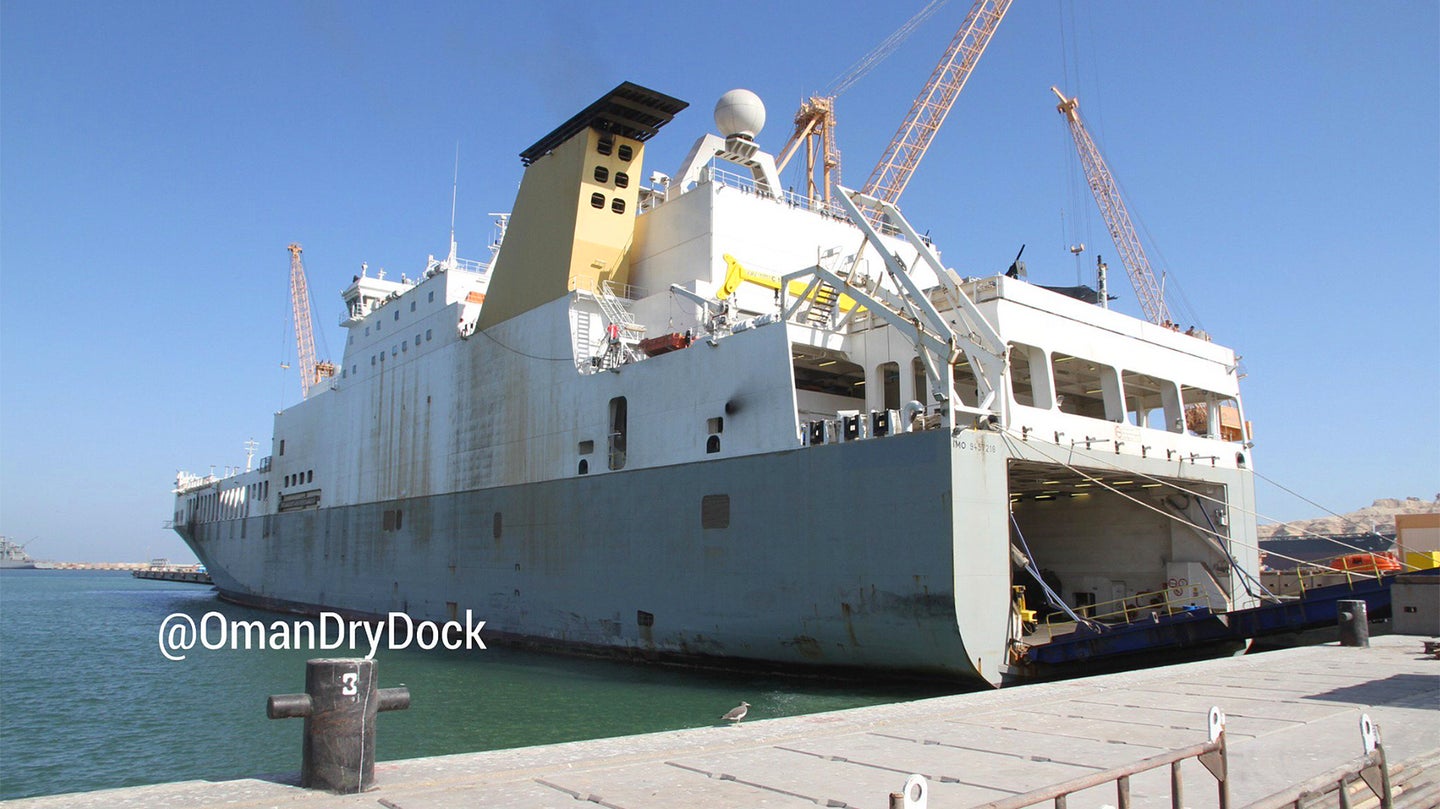 Nearly half a decade ago, U.S. Special Operations Command with the help of U.S. Military Sealift Command began the task of quietly turning a modern roll-on, roll-off cargo ship into a highly customized, mobile special operations mothership and sea base. In 2015, the ship that was once MV Cragside was well into its transformation at the BAE Systems shipyards in Mobile, Alabama. We were the first media outlet to post a picture of the extensive modifications being done to the already futuristic looking ship. You can read all about its highly unique capabilities here and see that photo posted below. Since then, nearly nothing has been heard or seen of the vessel. It has literally vanished, until now.

The question of how a vehicle so big and unique could simply disappear for years on end is what prompted our investigation. Upon reviewing satellite imagery, it was clear that ship left its pier in Mobile sometime between mid 2015 and early 2016. After a period of sea trials, and with its laughably innocuous new name MV Ocean Trader, the vessel reportedly entered the Mediterranean on May 16th 2016 for the very first time.

Over the next year and a half, the Ocean Trader's AIS transponder only popped up very briefly on a few occasions according to vessel tracking websites. It called on Gibraltar, the U.S. Navy's pier in Souda Bay, Greece, and IJmuiden, the Netherlands, located at the mouth of North Sea Canal. Beyond these few instances, the ship was a ghost, either not activating it transponder or running under a false identification.

The Mediterranean is a very relevant operating area for this vessel, especially in close proximity to Libya where U.S. Special Operations Command continues to hunt down high-value terrorist targets while maintaining a very small in-country footprint. Operating in the Baltic Sea also makes sense as it is increasingly becoming one of the world's strategic hot spots as Russia becomes far more aggressive towards its neighbors and U.S. interests in the region. It's also the location of many multi-national exercises every year, ones in which special operations are becoming ever more crucial.

But what's most puzzling is how this modified ship that was already unique looking before SOCOM had a shipyard take a torch to it, which now includes large ports for launching small boats, a fairly massive hangar bay and a big block of an extension behind the bridge, was never photographed during its travels. Ship spotters photograph far more mundane traffic all the time. With the ability to stay at sea unreplenished for a 45 days at a time, and considering the U.S. Navy's far-reaching logistical capabilities, it's possible that it spent long stretches at sea, only coming into port when it absolutely had to. And clearly, part of the idea behind Ocean Trader is that it won't stick out too much from afar—a wolf in sheep's clothing if you will—but the notion that there hasn't been a single photo published online of it in three years seems very odd. In fact, we still haven't seen it in its final configuration.

But that all quietly changed last January when the Oman Drydock Company posted images of its new arrivals on their promotional Twitter account. One of those ships just happened to be the elusive Ocean Trader.

For a ship that has clearly gone to great lengths to keep its very existence secret, let alone having its current location known, this gap in protocol seems odd, but then again, it isn't that surprising. For a marketing person who works at the yard, the ship looks like nothing important really at all, and it's doubtful that many are watching Oman Drydock Company's Twitter feed that closely. Whatever the case may be, there it is.

At first glance, the somewhat weathered ship almost looks like it hadn't received its elaborate alterations, or maybe it was just a ship of the same class but not the real article. But upon closer examination, it becomes clear that this is indeed the elusive SOCOM mothership. You can clearly see the square extension forward of the bridge. These are the large hangars that were added, with the vessel upper cargo deck becoming a flight deck. You can also clearly see the big block-like addition aft of the ship's superstructure, an essential alteration that allows the vessel to go from a relatively small crew to support nearly 300 special operations and support personnel. Large communications arrays can also be seen. There is even a .50 caliber machine gun mounted high above the stern and another on the starboard side of the superstructure.

Oman Drydock Compay's shipyard is located in Duqm, Oman, a fairly remote locale nestled along the Arabian Sea. So that puts the vessel in the Southwest Asia area of operations, which makes sense as it's abilities are extremely well suited for a whole variety of missions that are ongoing there, including counter-terror operations—especially those in Yemen and on the Horn of Africa—as well special operations support in the Persian Gulf. The U.S. Navy has its new gargantuan sea base forward deployed to the region as well, but that ship is a far more conventional affair and is more concentrated on counter-mine warfare than special operations at this time.

Regardless of its exact mission at this time, we finally get to see the ship in its finished state, at least from one limited angle. As to where it is now five months after it received servicing at the Omani shipyard, we can only guess. But at least we can confirm that it's out there, somewhere.

Maybe we will get to see new angles of the vessel or at least satellite imagery of it in its new configuration sometime in the future, but considering that we still can't even identify a home port for the ship, finding it again will be more about luck than anything else.