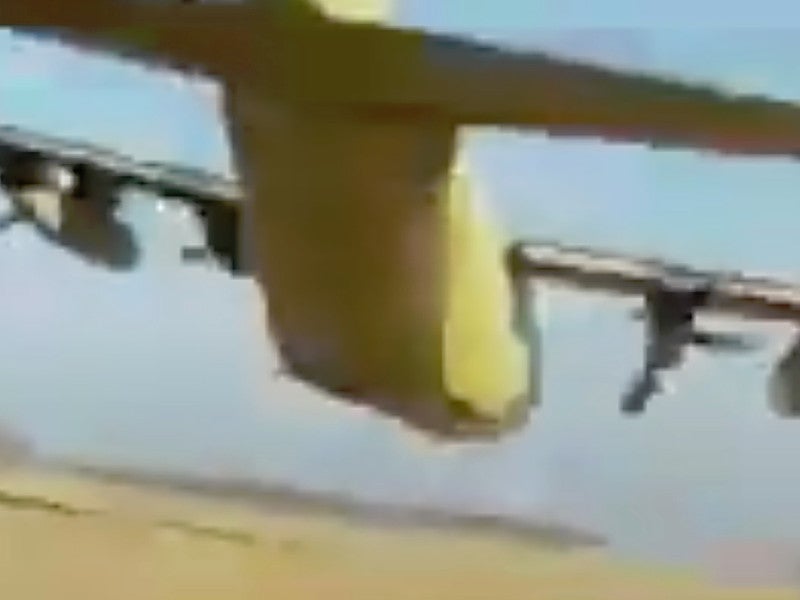 For years now, the Royal Saudi Air Force has been heavily engaged in operations in neighboring Yemen as part of a controversial coalition effort to defeat Iranian-supported Houthi rebels and their partners. Though Riyadh's combat jets, such as its F-15S Eagles, Eurofighter Typhoons, and Panavia Tornados, have captured most of the media attention, its fleet of C-130H Hercules airlifters have been especially important for supporting operations on the ground – and the crews are apparently equally eager to show off their more extreme skills.

On May 18, 2018, a video emerged online, reportedly of operations in Yemen, with a C-130H zipping right over the head of an individual on the ground. That person tries to slap the underside of the fuselage with a cap or another article of clothing while others appear to cheer at the amazing – and potentially dangerous – display of airmanship off camera. We don't know how much of this was actually planned or not.

The exact location isn't immediately obvious from the video, which shows the plane flying over a largely barren piece of desert. We do know that the Saudis have been using sand airstrips – runways in the loosest of terms – to support their operations on the ground, including one near the city of Marib.

These kind of locations are ideal for the C-130, which has long demonstrated its ability to take off and land in remote locations with extremely limited infrastructure. In Yemen, the Saudis have employed their fleet of more than 30 Hercules to move personnel and equipment around, deliver weapons and other supplies to friendly forces, and bring in humanitarian aid to areas under the control of the coalition.

The importance of the Hercules to Saudi operations in Yemen, as well as the country's ability to respond to other crises and conduct training exercises, throughout the country and elsewhere in the world, is evident from their plans to purchase dozens of new C-130Js. This proposed deal was included in an agreement between the United States and Saudi Arabia reached in 2017 regarding up to $110 billion in military equipment. There were also possible deals to support for the country's F-15 combat jets, new intelligence aircraft, a flotilla of frigates, and a massive air and ballistic missile defense shield, among other items.

The proposed C-130J deal was valued at nearly $6 billion and included 20 airlifters, as well as three KC-130J tankers, and associated support services. At present, the Royal Saudi Air Force has two KC-130H tankers in addition to its existing H-model cargo haulers.

If all goes according to plan, Saudi Arabia should begin taking delivery of the new Hercules in 2022. We'll be waiting to see whether their C-130 crews decide to put the new planes through any similarly crazy, low-level maneuvers.