Representatives say they don't want to pay for new aircraft to support the Open Skies Treaty until the Kremlin is again complying with the deal. 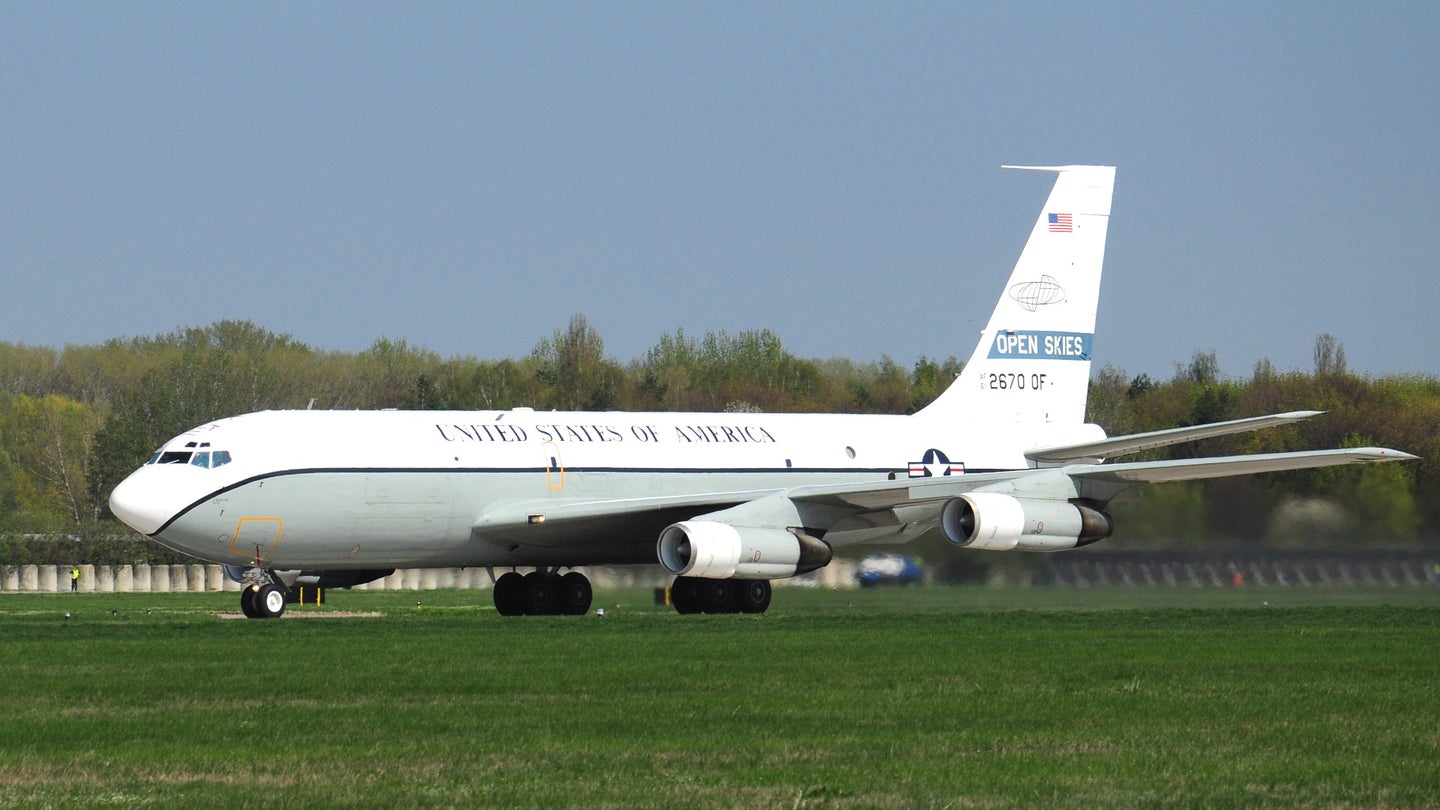 Members of Congress want to nix the U.S. Air Force’s plans in its latest budget request to replace two U.S. Air Force OC-135B surveillance aircraft and have proposed a provision that would make it illegal to do so until Russia returns to compliance with the Open Skies Treaty. That agreement, which allows both countries and other parties to legally fly aerial reconnaissance missions over other member states’ military facilities, has become increasingly controversial, but sticking with the old planes could put American crews at risk and would seem to put the United States at an inherent disadvantage in capability.

On May 9, 2018, in a session to amend and approve the latest draft version of the National Defense Authorization Act for the 2019 fiscal year, the formal title for the annual defense budget, the House Armed Services Committee removed the more than $222 million the Air Force had wanted in order to buy a pair of new aircraft to take on the Open Skies mission. The Committee and other assembled legislators approved the new version of the bill, which does retain nearly $6 million for upgrades to the two existing OC-135B aircraft, in a 60-1 vote. The funding allocations could change again in the future as the House and the Senate work to align their respective versions of the law before putting the final iteration up for a formal vote.

“Russia has violated key arms control treaties, expanded and modernized its nuclear arsenal, tested counter-Space weapons, and used emerging technologies to undermine its neighbors,” a statement that the House Armed Services Committee released after the so-called markup said. As such, Committee Chairman, Texas Republican Mac Thornberry was “withholding funding for Open Skies Treaty aircraft and sensors until Russia again complies with the Treaty and takes other steps, including agreeing to extradite Russian nationals who have been indicted for their actions against the United States during the 2016 election.”

The Open Skies Treaty entered into force in 2002 and presently includes 34 member states. The agreement allows any of them to fly limited surveillance missions over the territory of another with prior notice using aircraft equipped with relatively low-definition, visual cameras.

The ostensible goal of the deal is to improve transparency regarding peacetime military activities. The underlying concept is that if member states can directly observe and verify the nature of maneuvers and internal deployments and redeployments in neighboring countries, they are less likely the fear that these developments are actually a prelude to a sneak attack or other malign actions. This, in turn, is supposed promote stability between countries that might otherwise be skeptical of each others’ true motives.

To help enforce the treaty and provide the U.S. government with a capability to exercise its rights under the agreement, the U.S. Air Force’s 55th Wing at Offutt Air Force Base in Nebraska operates two specially configured OC-135B aircraft. The Defense Threat Reduction Agency, a U.S. government agency charged with both monitoring developments regarding weapons of mass destruction and also working to reduce the threat of conventional conflict, provides a portion of the crew during the actual mission.

But the OC-135Bs are among the oldest aircraft in the 55th Wing and are likely some of the oldest in the Air Force as a whole. These planes rolled off the production line in 1961 as C-135B Stratolifter cargo aircraft. The service subsequently converted them into WC-135B weather reconnaissance planes, before turning them into their present configuration.

So, in its fiscal year 2019 budget proposal, the Air Force has asked for funding to buy two new “small airliner class aircraft” to replace them. It’s not entirely clear what type of planes the service had in mind, as the description could apply to more traditional commercial-type passenger aircraft, such as varied as the Boeing 737, or increasingly popular business jet-sized designs such as the Gulfstream G500 and G600 series or the Bombardier Global Express.

If the Air Force determined it could fit the necessary equipment and crew into a bizjet-sized platform, it could have offered a particularly cost-effective replacement for the larger, but aging OC-135Bs. The service already operates various types based on the Gulfstreams, including plans to purchase new variants as an electronic warfare aircraft, as well as the Global Express-based E-11A Battlefield Airborne Communications Node (BACN), which could have further reduced operating and logistics costs. At the same time, it and other branches of the U.S. military fly militarized 737s, which might have made that an attractive option, too.

If nothing else, the Air Force had rightly determined that it needed some sort of replacement for the increasingly obsolete OC-135Bs sooner rather than later. These planes use four Pratt & Whitney TF-33 turbofans, an inefficient low-bypass design that first entered production in 1959 and that the company hasn’t made since 1985. Their predominantly analog mission systems and other onboard equipment are increasingly unsupportable, as well.

Mission availability rates for the two OC-135Bs are becoming a major issue, both in terms of capacity to meet the demands of the Open Skies Treaty and for safety and security reasons“The aircrews are being stranded in Russia for weeks at a time, put in really awkward situations,” Don Bacon, a Republican Representative for Nebraska and retired Air Force brigadier general who had previously led the 55th Wing, said, according to a report by the Omaha World-Herald.

The World-Herald said it had obtained a document showing that in 2016 an OC-135B flying over Russia had to abort its missions due to electrical problems that were so severe it needed an airworthiness waiver to leave the country two days later. When the crew tried to return home, however, the aircraft’s pressurization system caught fire, filling the main cabin with smoke. After getting the situation under control and safely transiting a mountain range, the plane diverted to a still undisclosed location for emergency repairs.

The Air Force is struggling to address similar issues with its two WC-135 nuclear reconnaissance aircraft, as well, which are similarly old and are also increasingly limited by the TF-33 engines. Though it scrubbed the OC-135B replacement program from the budget, the House Armed Services Committee kept in funding to pay for three newer WC-135R aircraft the Air Force plans to convert from KC-135R aerial refueling tankers with more modern CFM-56 turbofans. The service is also in the process of putting those tankers through a major Block 45 upgrade program that will give the aircraft new glass cockpits and other updated mission systems to keep them viable through at least 2040. All of this underscores the residual issues with any older C-135 types that will remain in service.

On top of these basic reliability problems, each OC-135B one carries three KS-87E framing cameras and a single KA-91C panoramic camera, which are all wet film types. This means that the crew has to land and send the film off for processing – a task that specialists at Wright Patterson Air Force Base in Ohio perform – before analysts can even begin to take a look at the imagery. The House’s latest version of the National Defense Authorization Act does retain the funding to replace those systems with four digital cameras, as well as upgrade the aircraft’s ADS-B transponder and other unspecified minor updates.

The video below offers an inside look at one of the OC-135Bs.

But those improvements won’t do anything to address the aircraft’s underlying age. And House Armed Services Committee’ Chairman Thornberry’s decision to hold off on new aircraft until Russia complies with the treaty would appear to only limit the U.S. government from taking legitimate advantage of the agreement in the meantime

It goes without saying that the Kremlin has steadily sought to erode the basic tenets of the deal in recent years. In 2017, the United States raised concerns anout Russian authorities having limited requests from member states to send aircraft over Moscow and its heavily militarized Kaliningrad enclave on the Baltic Sea, as well as Chechnya and Georgia’s pro-Russia breakaway region of South Ossetia. While the Chechnya issue has since been resolved, the others remain points of contention. A major sticking point is that Russia is of the opinion that South Ossetia, as well as Abkhazia, are independent countries who haven't ratified the Open Skies treaty and are therefore not subject to its provisions, while the United States sees these largely unrecognized states as part of Georgia.

In September 2017, the U.S. government responded by restricting Russia’s requests for flights over parts of Alaska and Hawaii. The Kremlin has a great interest in the expanding ballistic missile defense infrastructure in the former, repeatedly accusing the United States of developing those systems to challenge its nuclear deterrent capabilities. In reality, there is no way that the ballistic missile defense shield would be able to counter a Russian strategic strike.

Also at issue is that the Russians want to upgrade the sensors on their Tu-214ON Open Skies aircraft, which the U.S. government says will violate the limits on image fidelity in the agreement by adding modern infrared or radar imaging systems, though there is nothing in the treaty that specifically prohibits these types of systems. Critics of the treaty as a whole say that the Kremlin, which has far more limited satellite surveillance capability, gets much more out of the agreement than the United States.

Though this might be true, there is a good argument to be made that the treaty offers numerous less tangible benefits, primarily in helping to hold Russia accountable and forcing them to be transparent about their military developments, as well as giving smaller countries the ability to do the same. While the United States might not need the imagery Open Skies provides, its participation in the agreement gives added weight in the demands of small states, including those with much more active concerns about Russia’s intentions, such as Ukraine.

It also makes it clear that the U.S. and its partners are not willing to let the Kremlin unilaterally dictate changes to long-established international norms, which the Russians are actively looking to challenge at every available opportunity to suit their interests. “They [critics] think we don’t get a lot out of it, but the Russians do,” Representative Bacon said, according to the World-Herald.

Insisting the Air Force rely on increasingly dubious aircraft for the mission would seem to only limit the ability of the U.S. government to exercise its rights under the treaty, regardless of Russian compliance. This would appear to only provide the Kremlin with exactly what it wants, while at the same time making it increasingly dangerous for the crews to fly in general. There’s no clear description in the House Armed Services Committee’s statements about how hamstringing American capabilities would help push Russia back into full compliance, either.

“We made the case to the [committee] staff. I saw a softening of their position,” Bacon told the World-Herald. “I think we’ve got more fertile ground for 2020.”

At that point, it will have pushed the timeline for getting any new Open Skies aircraft back further with only limited updates to the existing aircraft. The Air Force’s fiscal year 2019 budget proposal also indicated plans to ask for almost $45 million in the next cycle to help continue the program.

In the interim, OC-135B will have to perform their mission as best they can within the increasing limits of the aircraft, and do so hopefully without any serious incidents that put the crews in danger or worse.

Correction: The original version of this article stated that Russia had denied, rather than limited flights over Kaliningrad and did not note that Russia and the United States have resolved the Chechnya issue. Additional clarification was added to those points, as well.