From Israel’s massive counter-strike to broken bearings on the Navy’s new supercarrier, we roundup all of today’s military news so you don’t have to.

In a new segment we are testing called 'Actionable Intel' we roundup all the news that is important enough for us to post but doesn't make sense for us to write a full article on at this time. From time-to-time it will allow us to keep updated on the cutting edge of critical stories without impacting the normal longer-format flow of the site.

So here are the key happenings from around the globe that you need to know about:

The War Zone had rolling coverage of the exchange on fire between Israel and Iranian operatives in Syria last night. We now have a clearer picture of just how extensive Israel's counter-strikes were. Five types of Syrian air defense systems were destroyed in the barrage, which included a whopping 60 weapons—ten of those were surface-to-surface missiles. These could have been mix or guided artillery rockets, ground-launched Delilah-GL cruise missiles, and Spike NLOS missiles among others. During the operation, Syrian SA-22, SA-2, SA-5, and SA-17 batteries were destroyed. The SA-22 unit, a Pantsir-S1 point defense system, is the most interesting of the lot as it represents the best air defense capability Syria has against standoff weapon attacks on key targets.

In total, Israel used 28 F-16 and F-15 fighter aircraft to execute the strikes. It seems fairly clear that the IAF was ready and waiting for a rocket barrage to occur in the days and hours that led up to the attack. Israeli press repeatedly warned that the IDF was tracking peculiar movements across the border in Syria and Israeli tankers were on station over eastern Israel for some time before the attack occurred. Above all else, the sheer size and brevity of the revenge strikes indicate a large pre-planned operation that would hit most known Iranian-related targets in Syria was ready and waiting to be executed. In total 23 were killed in Syria, 18 of which were foreign fighters according to The Syrian Observatory for Human Rights.

It's also worth noting that Russia was informed well ahead of the counter-attack.

Israel considers the matter closed at this time but said it would retaliate heavily if attacked again.

Israel's Defense Minister Avigdor Lieberman said the IDF targeted "nearly all the Iranian infrastructure in Syria" and that Iran "needs to remember the saying that if it rains on us, it'll storm on them. I hope we've finished this episode and everyone understood." He continued, stating that Israel "won't let anyone attack us or build an infrastructure to attack us in the future."

The extent of the damage done to Iranian interests in Syria still hasn't been quantified, but Israel's overwhelming response was clearly designed to deter further Iranian military operations against Israel. The big question now is how, or if Iran will respond to the onslaught? At the time of publishing, it is 10:30pm local time in Israel. If an Iranian reprisal strike does occur, it is likely to happen in the coming hours.

German Chancellor Angela Merkel made quite the splash today when she announced that "It is no longer such that the United States simply protects us, but Europe must take its destiny in its own hands. That's the task of the future." Clearly, this is in reference to the changing foreign policy of the Trump administration and its 'America First' strategy.

The President has also demanded that many NATO countries spend more on defense—much more—than they currently are. But Merkel's declaration seems alarmingly disconnected to the very poor state of readiness that the German military is experiencing. It's air force and navy are largely broken, while at the same time it looks to spend countless funds on indigenous weapons programs that will come too little, too late, if at all.

The Pentagon's Nuclear Posture Review recommended developing new tactical nuclear weapons to better confront Russia's own focus on using tactical nukes as a strategic fulcrum. This was and remains a highly controversial move that some see as totally wasteful and/or downright dangerous. During a House Armed Services Committee meeting on Wednesday, members stated their concerns about the initiative and tried to add amendments to limit the development of these new weapons, with Defense News stating:

Democrats argued the U.S. development of a low-yield weapon ― likely a submarine-launched cruise missile ― will be destabilizing, fuel an international arms race and lower the threshold for the use of nuclear weapons.

“We have to have a credible deterrence, but I think the Nuclear Posture Review goes way beyond credible nuclear deterrence and puts you into a position where we risk miscalculation and we could stumble into a nuclear war,” said HASC Ranking Member Adam Smith, D-Wash.

“We are on the track toward a new nuclear arms race, this time including Russia and China, the United States and perhaps other countries along the way. It’s extraordinarily dangerous, and we need to be very cautious here,” said Rep. John Garamendi, D-Calif.

Republicans sided with the Pentagon, countering that the nation needs a robust nuclear program to pose a credible deterrent and keep pace with Russia and China, who they say are rapidly modernizing their nuclear arsenals.

“This committee knows what Russia’s up to with its nuclear weapons. It’s both sobering and horrifying,” said HASC Strategic Forces Subcommittee Chairman Mike Rogers, R-Ala. “We also know Russia’s nuclear doctrine is to use low-yield nuclear weapons early in a conflict to get the U.S. to back down.”

Mattis was also on The Hill this week defending the move to field new tactical nuclear weapons, saying that having them may help keep Russia from using similar weapons as a way to 'escalate to deescalate.' We have discussed this tactic before which you can read about here, here, and here.

In the end, the Republican majority on the committee voted down the amendment to the National Defense Authorization Act and endorsed the Nuclear Posture Review. We have stated our take on the document and the policy that is emanating from it.

J-20 Heads To Sea And Shows Off Its Helmet Mounted Display:

China's now operational 5th generation fighter, the J-20, has begun training over the ocean, a place it is most likely to see combat.

A video of the jet undergoing training has surfaced, showing it flying with other Chinese fighters. In it, the pilot is wearing helmet-mounted display (HMD) that looks awfully similar to the Helmet Mounted Symbology System and its Cobra HMD derivative used on the Eurofighter Typhoon and the SAAB JAS39 Gripen. An HMD has long been expected to be a major component of the J-20s advanced avionics suite but one has not materialized until now.

BAE System describes the utility of the dimples on the helmet as such:

"The bumps (infra-red LED’s) are used to calculate the pilot’s head position and its angle. The LEDs on the helmet flash and the 3 sensors in the cockpit detect the flashing. The data is then used to calculate where the pilot is looking. As the pilot turns his head, the system continually re-configures to use the best sensor and LED combination to give the most accurate result. Accurate targeting is immediate; there’s no delay"

Other HMDs, like the USAF's JHMCS, don't have the dimples because they use magnetic tracking instead. It's worth noting that even well over a decade after entering into service, the F-22 still lacks any kind of an HMD.

Modern HMDs allow pilots to target their weapons far off the centerline axis of the aircraft and drastically enhance situational awareness.

President Trump and the First Lady were on hand at Andrews AFB late last night for the homecoming of three U.S. prisoners that were being held in North Korea. Whatever your politics are, this is a great thing and a win. North Korean prisons and labor camps are hell on earth, and seeing these guys back on U.S. soil has to make you happy.

There have been lots of commentaries stating that last night's homecoming was in poor taste and that these men were being used as political props. The main thing is that they are home and really that's all that matters. Kudos to Trump, Pompeo and the U.S. diplomatic team for making it happen.

It's also worth noting that the men flew on a separate aircraft, a C-40, while Pompeo flew on a C-32A. It isn't clear why this occurred as both aircraft seemed to arrive nearly at the same time at Andrews AFB.

Just hours after the three Americans returned home, Trump tweeted about capturing five of the most wanted ISIS leaders.

"Five senior Islamic State officials have been captured, including a top aide to the group’s leader, in a complex cross-border sting carried out by Iraqi and American intelligence, two Iraqi officials said Wednesday.

The three-month operation, which tracked a group of senior Islamic State leaders who had been hiding in Syria and Turkey, represents a significant intelligence victory for the American-led coalition fighting the extremist group and underscores the strengthening relationship between Washington and Baghdad.

Iraq’s external intelligence agency published a statement confirming the arrests, but did not mention any details of the role played by the Americans or the Turks. The two Iraqi intelligence officials spoke on condition of anonymity to discuss details that had not been made public."

One of the men was a close aid to the Islamic State's still unaccounted for kingpin Abu Bakr al- Baghdadi:

He had been living in Turkey with his Syrian wife under his brother’s identity, one of these officials said."

Capturing these maniacs alive could result in one of the biggest intelligence coups since the Islamic State thundered onto the world stage the better part of a decade ago. It could even lead to the capture or killing of al Baghdadi. Such an event would strike at the soul of the terror group that is already on the ropes in Syria and almost entirely exterminated from Iraq.

This is the second time that the Ford has experienced the failure of a main thrust bearing on its propulsion system, following an earlier incident in April 2017. The bearings, manufactured by General Electric under its contract for the Ford's propulsion system, were apparently made with "machining errors," the root cause of the failures.

The failure resulted in the $13B supercarrier returning to port for repairs. The Ford is riddled with issues which we have detailed many times before, and its ability to carry out its mission by its in-service date, which is now sometime in 2022, remains uncertain. Meanwhile its sister ship the USS John F. Kennedy is 75 percent structurally complete. And whatever issues the Ford suffers from the Kennedy will too. 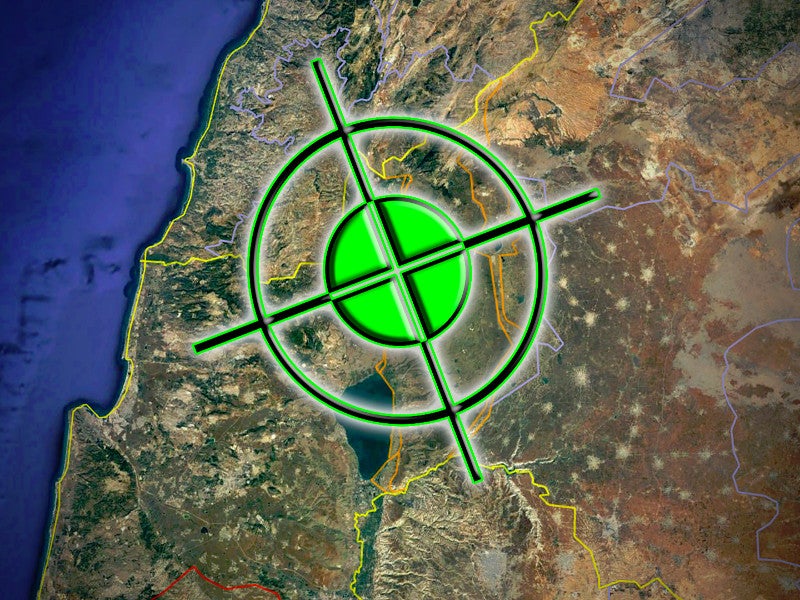 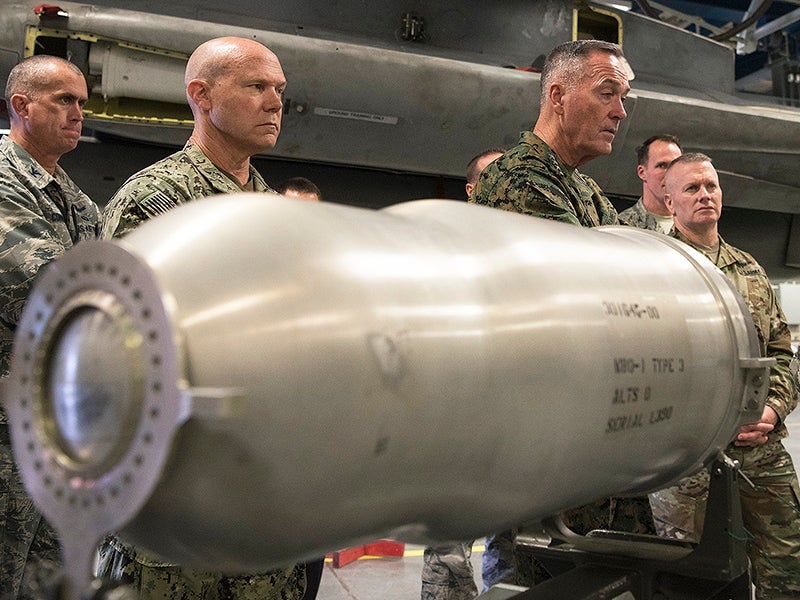 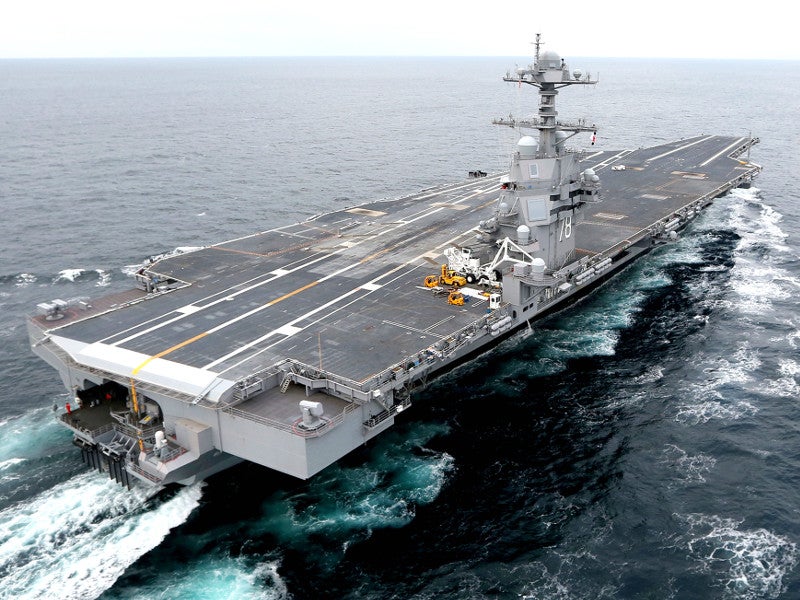