New photos give us a much more complete view of the aircraft, clearly showing its lineage to Scaled Composites' Firebird long-endurance design. 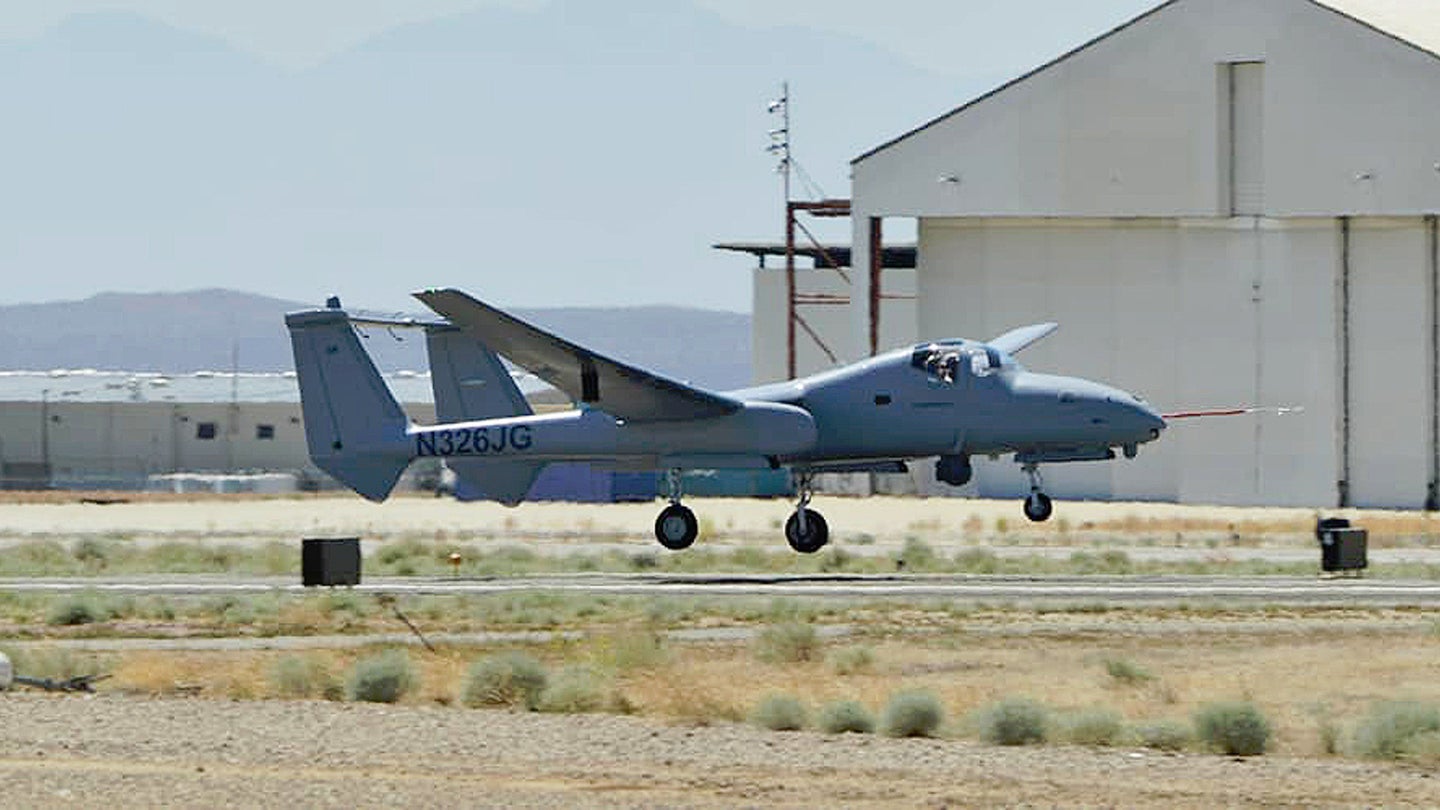 The War Zone recently got an interesting look at what turned out to be the latest derivative of Scaled Composites Firebird optionally-manned long-endurance aircraft, also known as the H03. Now we’ve received additional images of the aircraft, which carries the civil registration code N326JG, in flight.

Photojournalist David Wirth captured these latest pictures near the Mojave Air and Space Port in California. Northrop Grumman, which owns Scaled Composites at present, has a hangar at the airport and that’s where the all-gray H03 had previously emerged. The aircraft has a large air data boom, indicative of flight test activities, but we don’t know if this was its first flight or not.

Otherwise, the aircraft’s most prominent difference from the second iteration of the Firebird is the significantly longer wings. According to the Federal Aviation Administration (FAA), Northrop Grumman has of the previous types, known as R02s, which carry the civil registration’s N241PR and N412DB. The original Firebird demonstrator, which has the tail number N355SX, remains linked directly to Scaled Composites in the FAA database.

In addition, the H03 has a revised engine and nacelle configuration. The R02s reportedly used a single Lycoming TEO-540E engine, a turbocharged variant of a relatively simple design that dates back to 1957, as its powerplant.  That the aircraft only needed one these engines was good evidence of their highly efficient performance. As of 2012, Scaled Composites said the "production ready" design could use a "heavy fuel" powerplant.

The changes near the engine area suggest that the new version could have a different and more efficient or powerful powerplant to fly higher, longer, or with a larger payload. Scaled Composites’ demonstrator already boasted the ability to fly at a maximum altitude of between 30,000 and 35,000 feet and at a top speed of around 230 miles per hour. The company said it could stay aloft for up to 40 hours at a time.

Beyond that, the H03 appears to largely share the same twin-boom and fuselage configuration as the R02s and looks to have a nearly identical two-person, side-by-side cockpit arrangement. A still unknown buyer reportedly requested the addition of the second seat so that the aircraft could accommodate a copilot, also acting as the payload operator, during manned flight.

The sensor and equipment fit also appears to be unchanged since we last saw N326JG. There is a single, large, black sensor turret underneath the fuselage. The aircraft, like its predecessor, is presumably capable of carrying various electro-optical, infrared, or multi-spectral video cameras, along with laser range-finders and designators.

There’s a “platter” antenna on the right boom, which is likely associated with a UHF satellite communications suite, as well various other antennas and aerials for other types of communications equipment and data links. The two black aerials under the wings are much more apparent in these new images, which likely work as line-of-sight UHF data links.

There appears to be another line-of-sight (LOS) data link under the nose and another one on top of the right tail. On the original Firebird and the R02s, personnel could install additional beyond-line-of-sight (BLOS) links in the cockpit area for unmanned operations with an operator controlling the aircraft remotely from a ground station. It is said that the H03 can fly without a pilot in a similar configuration.

However, it is almost certain that the H03 can carry additional sensors, such as imaging radars and multi-camera wide-area persistent surveillance systems, as well as other equipment, including communications relays and electronic intelligence gathering suites. The R02s had a number of modular payload bays to accommodate these systems and it is likely that this newer aircraft retains many of those same compartments.

The original demonstrator also flew for a time with a sensor turret, what appeared to be a small radome, and an antenna array of the kind associated with signals intelligence equipment. The H03 looks like it could offer an even more capable intelligence, surveillance, and reconnaissance platform than its predecessors.

The real mystery of this plane remains what customer or customers Northrop Grumman might have lined up to purchase it and/or other production examples in the future. As of 2012, the R02s reportedly cost $10 million each, including a rudimentary sensor and communications setup. This would make it an attractive and cost-effective competitor to various long-endurance manned and unmanned intelligence, surveillance, and reconnaissance aircraft, especially medium-altitude, long-endurance designs such as MQ-9 Reaper, and even the RQ-4 Global Hawk to a more limited degree. It could also offer a low-cost surrogate for those aircraft during training exercises or in order to test new equipment on a representative platform.

On top of that, compared to its strictly unmanned competitors, pilots would be more readily able to deploy the aircraft to a theater of operation before personnel there reconfigure it for unmanned operations, all with a relatively limited logistical footprint. With its modular equipment bays, a single aircraft could be a more flexible platform, as well, with crews swapping out systems as necessary. As noted the H03’s payload capacity could exceed that of the R02s, which could already reportedly carry almost 1,250 pounds of sensors and other systems in their fuselages and sponsons.

Now that N326JG is clearly flying, we’ll be keeping an eye out to see where it might turn up next, and in what configuration, which could offer new clues as to potential buyers and what missions they have in mind for the aircraft.