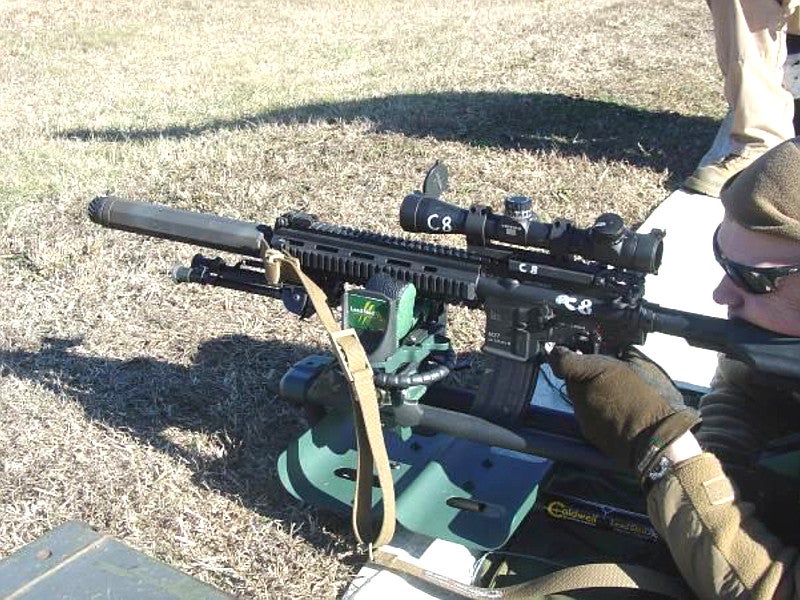 The U.S. Marine Corps continues to push ahead with plans to make Heckler and Koch’s M27 Infantry Automatic Rifle the service’s standard infantry weapon, as well as the platform for a new designated marksman rifle called the M38. At the same time, a test report has surfaced that raises concerns about whether the M38 is accurate enough to perform in that role and whether either of the weapons will work reliably with sound suppressors.

TheFirearmBlog.com obtained the Marine Corps Systems Command report and posted a copy online in April 2018. The document is marked 2015 and “For Official Use Only,” but clearly states that it covers evaluations that ran through 2016, suggesting the cover date may be a typo. The test specifically evaluated the M38, which the Marines identified at the time as the “M27 Special Purpose Rifle,” but many of the data points apply equally to both weapons.

The designated marksman rifle version, which the Marines are already fielding operationally, is essentially the same as the base M27 weapon with a Leupold TS-30A2 Mark 4 MR/T scope on top. In 2011, the Corps first began issuing M27s as a substitute for the larger M249 Squad Automatic Weapons in its infantry squads.

According to the report, the Marine Corps’ requirement for the M27-based designated marksman rifle emerged in 2014 when it retired its stock of Mk 12 Mod 1 Special Purpose Rifles. Originally designed by the U.S. Navy for special operations forces, these Marines obtained these weapons to meet urgent demands from the service’s conventional units in 2007.

The Mk 12 Mod 1 was a heavily modified M16A1 rifle. Though the M27, itself a variant of Heckler and Koch's HK416, is derived from the M16-series of rifles, it uses a different operating mechanism with a physical piston over the barrel to cycle the weapon’s action. This system has proven more reliable than the original AR-15/M16-pattern design, which siphoned some propellant gas from the barrel and used it to directly move the gun's internal components. As a result, this would blow carbon particles matter straight into the center of the rifle, which could build up over time and cause the gun to jam unless the operator was careful to clean the weapon regularly and thuroughly.

Though the report says that the combination of the M27 rifle with the Leupold TS-30A2 Mark 4 MR/T scope met nearly all of the test objectives, it has a number of extremely significant caveats. The most obvious issue is the scope itself, which is a dated design that the Marine Corps reportedly chose because it already had them in inventory, left over from the Mk 12 Mod 1 rifles.

The Leupold TS-30A2 Mark 4 MR/Ts have a reticule pattern that does not feature range measurements in the same units of measure as the external adjustment knobs. As the TheFirearmBlog.com noted, this means a shooter cannot make easy changes by turning the knobs a certain amount based solely on what they see through the scope.

More worrisome, by using the existing optics, Marine Corps Systems Command also decided it could limit testing to determine whether or not the scopes were truly suitable when installed on the M27s. The evaluators themselves noted that data about how well the scope worked on the older Mk 12 Mod 1s might not reflect its performance on the new rifles.

“The TT [test team] limited the amount of rounds fired to 2700 rounds per weapon based on the successful performance of the Leupold Mark 4 Scope on the Mk 12 Mod 1,” the report says.  “There is [a] risk that the optic may not perform as well or in the same manner under a higher round count on the M27.”

The Marine Corps has largely dismissed these concerns, saying that the M38 is more than accurate enough for the designated marksman role. It is important to note that the weapon is not intended a high-precision sniper rifle.

“I don’t doubt that they [Marine snipers] don’t like it,” now-retired Chief Warrant Officer 5 Christian Wade, who previously served as in the 2nd Marine Division and was at the head of a number of experimental infantry modernization efforts, told Marine Corps Times. “The M38 is not intended for scout snipers. The M38 is only supposed to be in the rifle squads.”

But there are concerns for how the combination might stand up to the rigors of more conventional use, too. The test points related to the scopes only involved data taken when shooters fired shots in the semi-automatic fire mode, as one would expect from designated marksman. Much of the available information about the scope in combination with the Mk 12 Mod 1 also involved predominately semi-automatic fire.

Marines now armed with the M38 may find themselves called upon to perform more traditional infantry duties, as well, which could call for fully automatic suppressive fire. “There is [a] risk that the optic and/or suppressor may not perform as well or in a similar manner under extended automatic fire,” the report notes, adding that the optic might just end up damaged to some degree from the strain.

The report also prompts serious questions about whether the M27 or the M38 are reliable when shooting with a suppressor attached. This is a particularly significant issue given that the Marines are exploring the potential of issuing these devices to infantry units on a broad basis and are looking to make the M27 the standard rifle across the service.

The evaluators reviewed two different suppressors during the tests, the Knight's Armament Company (KAC) QDSS-NT4 and a modular Operator Suppressor Systems (OSS) unit made up of its Back Pressure Regulator (BPR) and a Signature Reduction Module (SRM).

The KAC product is already in widespread service across the U.S. military and operator surveys during the tests showed it was the preferred option. The Marines found that the OSS system was more complex, maintenance intensive, and difficult to quickly install and remove, even though it produced better accuracy results.

The KAC suppressor, on the other hand, was more user-friendly, but threw off the aim – “point of impact,” or POI – of the weapon by an average of nearly two and half minutes of angle. When it comes to firearms, this unit of measurement, abbreviated MOA, is best understood as a cone with a circle at its base that grows one inch in diameter for every 100 yards. A weapon with a stated accuracy of approximately one MOA can reliably hit within a one-inch diameter circle at 100 yards and an 8-inch diameter one at 800 yards.

Shifting the point of impact two and half minutes of angle equates to sending the bullets off target up to 20 inches away at 800 yards. Some of the test weapons had deviations closer to five minutes of angle. The Marines' stated requirement was no more than a two MOA shift when an operator put the suppressor on.

This change in accuracy could effectively preclude users from switching rapidly from suppressed to unsuppressed operations in the field, where they might not be able to quickly adjust their sights. Otherwise, they might have to estimate the new point of impact and manually adjust their point of aim. At the time of the test, the Marines threw out these concerns, as well.

“It is the Test Manager’s opinion that POI shift is not as important as it once was,” the report concludes. “Marine Corps snipers are interested in what the POI shift is for their weapon, but their Tactics, Techniques and Procedures (TTP’s) call for them to shoot suppressed rather than unsuppressed. If the TTP for the SPR will require the operator to shoot suppressed rather than unsuppressed, then this attribute should be changed.”

The Marines are moving toward a doctrine where shooting suppressed will be a standard practice for regular infantry units using both M27s and M38s. The attribute will have to change, if it hasn’t already, and it’s not clear how that might affect either weapon’s suitability for routine operation with a suppressor.

On top of that, suppressors as a general rule also produce additional pressure on the operating mechanism since they capture propellant gasses in a confined chamber right at the muzzle of the gun. This in turn typically causes the action to cycle faster than it would without the device installed. The OSS suppressor’s BPR is specifically there to mitigate this issue.

During the tests, the M27s with the KAC suppressor suffered a significant number of jams, almost all attributed to the increased cyclic rate. These failures occurred during both semi-automatic and fully-automatic fire.

Taken together, all of these issues raise important questions about the Marine Corps’ near-term plans for the M38 and the wider issue of M27s with suppressors. Modifications to either the weapons or purchase of new optics or suppressors with improved features might reduce or even eliminate the problems, but could easily incur additional costs. Based on the reviews of the OSS suppressor, adding improved ancillary equipment onto the guns in the future could make them more expensive to operate and maintain, as well.

The price of the rifles, which have been significantly higher than earlier M16-pattern guns, has long been an issue. Members of Congress have openly questioned the wisdom of the Marines desire to rapidly buy thousands more of the guns without holding an open competition, especially to a foreign-headquartered firm.

At the end of April 2018, the service issued its latest sole-source deal with Germany-based Heckler and Koch’s American subsidiary for up to 15,000 more M27s and spare parts. That contract could be worth nearly $30 million.

In this latest purchase, though, each M27 will cost the Marines around $1,300. This is less than half the cost the service had paid per weapon in the past, suggesting that the increased orders had led to lower unit costs.

“What I expect is that with the issuance of the M27 to all Marines in every squad, the ongoing mass employment of suppressors, and the development of variable power optics, every Marine in the squad will have the M38 capability in his own rifle,” retired Chief Warrant Officer 5 Wade said in his interview with Marine Corps Times. “The rifleman with an M27 IAR [Infantry Automatic Rifle], suppressor, variable power optic, advanced NODs [night vision], etc. who is fully trained, is a game changer.”

In the meantime, unfortunately, Marines will have to make do with the rifles, scopes, and suppressors they have now, which could be less accurate and less reliable under actual operational conditions than advertised.