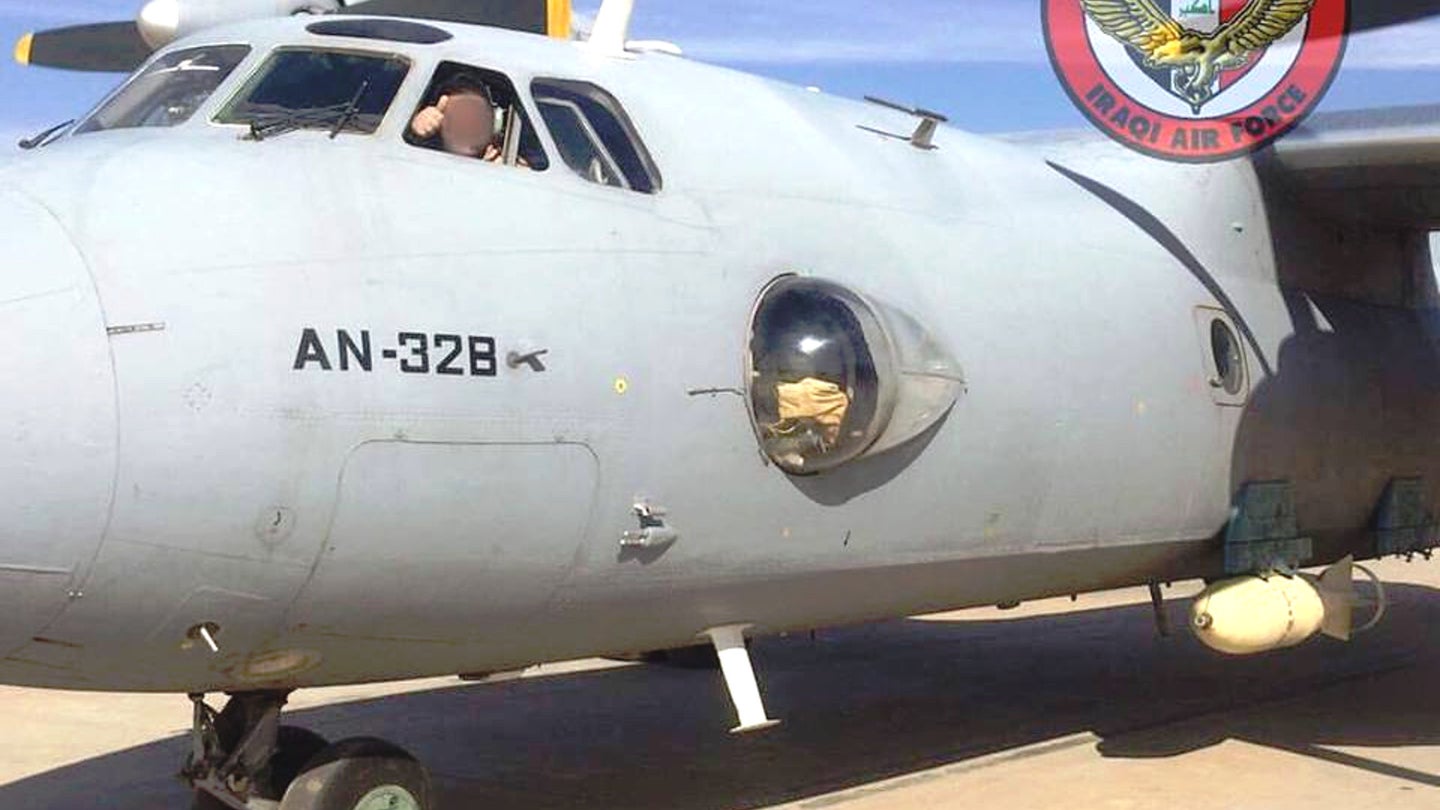 Following a recent strike its F-16IQ Viper multi-role jets flew against ISIS terrorists in neighboring Syria, the Iraqi Air Force has released a detailed infographic showing how many combat and combat support missions each of its aircraft types have flown over the past nearly four years. Of particular note is that the country’s An-32 cargo planes have conducted more airstrikes than either Iraq’s F-16s or its Aero L-159 Advanced Light Combat Aircraft, or ALCA, light attack jets.

The Iraqi Air Force released the infographic, with its text unfortunately only in Arabic, on its official social media accounts on April 23, 2018. But the statistics, which cover the period from June 10, 2014 to December 31, 2017, clearly show that the An-32s flew 990 strike missions during that time, almost twice that of the Iraqi F-16 fleet’s 514 sorties and nearly a sixth of the total missions that the aircraft conducted altogether. Neither figure is close to the more than 3,500 strikes that the country’s Su-25 Frogfoot ground attack aircraft flew in that same period.

It’s also worth noting that the F-16IQs only began flying combat missions in 2015 and it’s unclear how long the Iraqis have employed their An-32s in the bomber role, if they’re still operating the aircraft in this way, and how many of the six total aircraft had or still have the ability to carry out strikes. Official Iraqi Air Force social media accounts have posted pictures of what appear to be An-32s with side-mounted bomb racks as recently as earlier this month, but we don't know if those images are necessarily new or not.

Regardless, per Iraq’s own statistics, even if all of the transports have gone back to more traditional activities, the country’s newer jet combat aircraft are still playing catch-up in terms of total missions flown. The infographic also underscores how important the converted transport planes have been in Iraq’s own, far less publicized air campaign against ISIS.

According to a detailed report from War Is Boring in 2016, Iraq’s armed An-32s were born out of a desperate need for combat airpower after the Iraqi military spectacularly collapsed in the face of the terrorists flooding into the country in 2014. At that time, the country’s first F-16 pilots, along with their aircraft, were still training in Arizona. The only fixed-wing combat aircraft available for immediate strikes were a hodgepodge of sometimes flyable Su-25s from Russia and Iran and AC-208 Combat Caravan light attack aircraft.

So, Iraqi authorities decided to turn to Ukraine’s Antonov, the successor to the Soviet-era design bureau of the same name that first developed the An-32, to arm some of the transports to further expand their combat capabilities and do so quickly. Since the An-32 is a derivative of the An-26, with an almost identical fuselage shape, this was not a particularly difficult proposition.

Antonov had already developed a method to attach four racks to that older aircraft, two on each side of the fuselage, able to carry 500-pound class bombs, a configuration that reportedly dates back to before the Soviet invasion of Afghanistan. In addition, a special system was installed inside the main cargo bay that allowed the crew to roll up to four more 500-pound class bombs right out of the back of the aircraft. A bombardier using an NKPB-7 optical bombsight in one of the plane’s two side-mounted observation windows would aim the weapons in a method not far removed from how bomber crews did so in World War II. It is not clear if the Iraqis are still using this sighting system.

More recent images show Iraqi aircraft with what appears to be a new, single, long pylon on either side of the aircraft that might be able to accommodate multiple 500-pound class bombs or larger munitions. It is also possible this new configuration could be some kind of sensor system, further highlighting the versatility of the aircraft. The mount also appears to hold a large dispenser for decoy flares, another important addition given reports that ISIS has obtained infrared-homing, shoulder-fired, man-portable surface-to-air missiles in the past.

The Indian Air Force was actually the first to convert its An-32s to use the cargo bay bomber modification and demonstrated their strike capability for the first time during an exercise in 2013. Ukraine also employed similarly armed versions of the An-26 in the open stages of its campaign against Russian-supported separatists in 2014.

Of course, converting transport planes into bombers isn’t a particularly new concept, with examples dating back to World War II. It has long offered a low-cost means of rapidly acquiring combat aircraft.

The U.S. military, in a way, continues to maintain a similar capability with regards to the GBU-43/B Massive Ordnance Air Blast, also known as the Mother of All Bombs or MOAB. The only U.S. Air Force’s MC-130 special operations transports are the aircraft able to employ this weapon, which has a total weight of more than 21,000 pounds, of which more than 80 percent is explosive. However, those weapons have a GPS-aided inertial guidance system.

In contrast, most other such bomber conversions of transport planes that remain in use today around the world, such as Iraq’s An-32s, are generally an especially crude method of conducting strikes. We don’t know where and how the Iraqis have employed these armed An-32s, but there were increased reports regarding their use in the lead up to liberating Mosul in 2016, along with an official video showing Mi-171 helicopters dropping unguided bombs from high altitudes.

It is possible, and perhaps likely, that the An-32s were among the factors that contributed to significant reported civilian casualties during the Mosul campaign. The converted transports simply would not have been able to strike targets with high precision, increasing the chances of collateral damage in general, but especially during missions over a densely packed urban area where ISIS in many cases deliberately established positions next to innocent bystanders.

Iraq’s recent strike in Syria, which the country's military very visibly touted as a precision affair involving laser-guided bombs as seen in the video below, could indicate that the country is moving away from its earlier imprecise tactics. Unfortunately, it’s hard to say how regularly the Iraqi Air Force conducts missions using precision-guided munitions.

But with its F-16IQs, Su-25s, L-159s, and now South Korean-made T-50 Golden Eagle jet trainer and light attack aircraft, Iraq increasingly has far better options when it comes to carrying out air strikes and appears to have relegated its AC-208s to intelligence, surveillance, and reconnaissance missions. And even though the Vipers are the only aircraft that can employ precision-guided munitions, the Frogfoots, ALCAs, and Golden Eagles can all almost certainly deliver unguided weapons more accurately that the converted transports.

The An-32s could still find some use against remote militant camps or compounds, where precision might not be as important as volume of fire and where there is less concern about causing civilian casualties. With ISIS, or some new “ISIS 2.0” iteration of the group, still a threat in Iraq and Syria, air power will almost certainly continue to be an important part of making sure the terrorists are unable to reassert themselves.

Earlier in April 2018, ISIS released the first statement from its main spokesman, Abu Hassan Al Muhajir, in 10  months, which notably called for increased attacks on other Arabs, including those in Saudi Arabia, Egypt, Iran, and Palestine, in addition to keeping up the fight against both the United States and Russia in the region. “These are Arabs and are more fierce and vicious against Islam,” Al Muhajir argued in his remarks, according to The New York Times.

At the same time, it will be important to make sure that any air strikes aren’t doing more harm than good, though. Errant bombs can easily play into hostile propaganda.

The armed An-32s appear to have provided an immediate boost combat air power for the Iraqi Air Force, but with so many other, better alternatives available, the aircraft are likely to find themselves flying more traditional missions hauling passengers and cargo. There's always a possibility that Iraq might reconfigure them again for new roles, too.