Being able to visualize an air force’s aircraft fleet and how it is organized helps bring perspective as to its strengths and weaknesses. 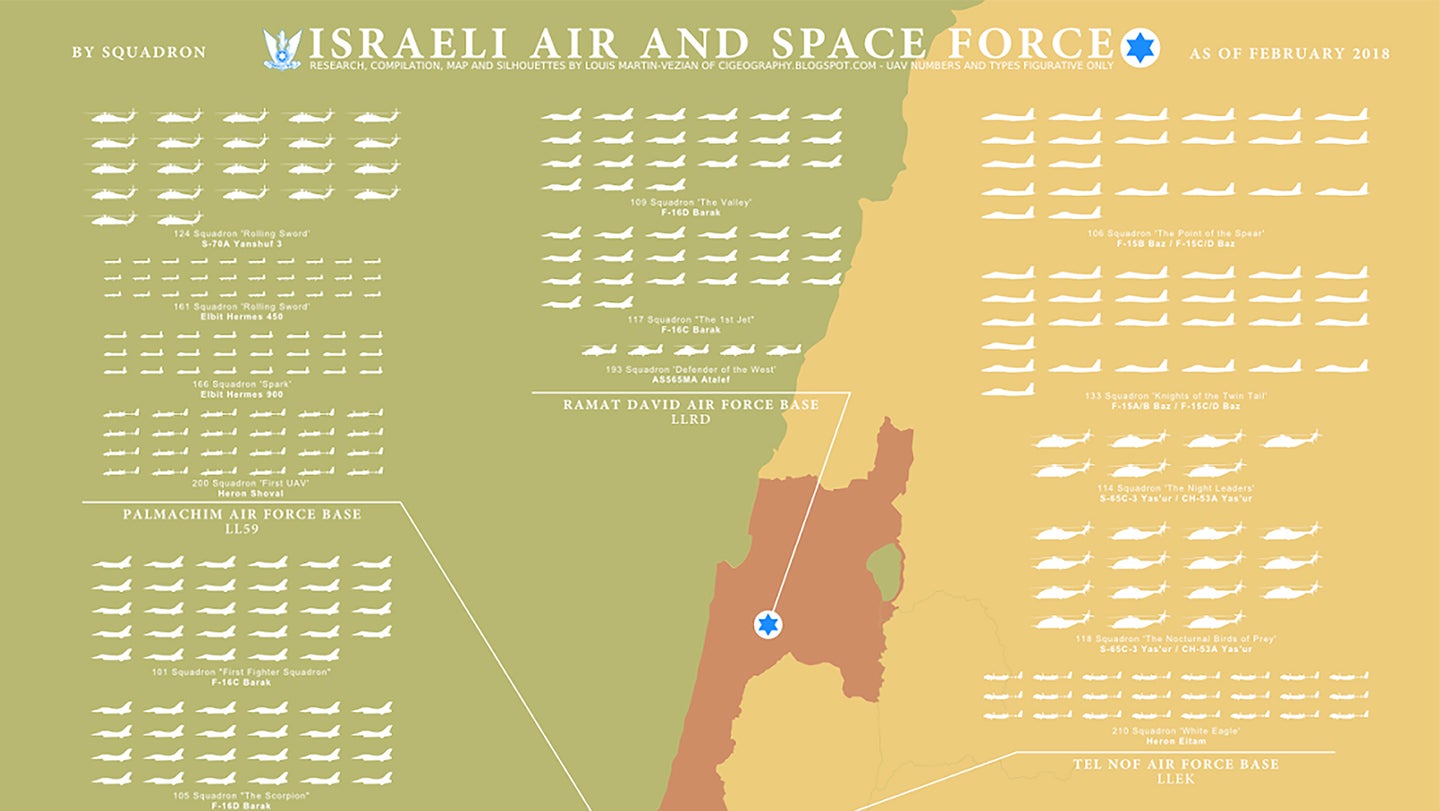 Aircraft inventories, squadron organization, and basing locations of various air arms around the globe are always of great interest to anyone who keeps an eye on military aviation, and nobody conveys that information better than our good friends at Contemporary Issues Geography. They have mastered the art form of showcasing an air force's order of battle in a single attractive graphic (like here, here, here, here and here). With this in mind, we always like so show off their newest works, and this time around they have come through with new panels depicting the Israeli and Canadian Air Forces.

We get a lot of questions regarding the inventory of the IAF, especially as to the state of its F-15A-D 'Baz' and F-16 fleets. CIGeography has made answering these questions much easier and even provides basing locations for each element of the IAF's flying force.

Some interesting takeaways from this chart include the fact that the 'Flying Dragon' squadron—the IAF's dedicated aggressor unit—has just six F-16C jets. Also, although so much is made of the IAF's Shavit and Eitam fleet, there are only five of these aircraft in total, but apparently the IAF is looking to bolsterthat force. And always something that was puzzling to us is that the IAF retains a cadre of just ten KC-707 tankers. It seems like such a small fleet versus the country's large tactical fighter force would be stretched far too thin during a sustained air operation against Iran, at least without the USAF's help.

The Royal Canadian Air Force has been in the news constantly as of late due to the seemingly endless CF-18 replacement fighter saga. But there is much more to the RCAF than just its Hornet contingent, as you can see in the eye-catching chart below.

When you look at it visually, it's clear just how much the RCAF depends on the CH-146 Griffon/Twin Huey as the backbone of their vertical lift capability. The youngest of which is two decades old. According to the chart, the Hornet force is made up of 77 jets, but what's interesting is that nearly 30% of that force is dedicated to training or test and development. This underlines the cost of keeping nearly all tactical fighter pilot training in-house and not outsourcing it to another country's air arm. Also of note is that six CC-115 Buffalos remain in service, which is truly a wonderful thing.

The coolest part about these awesome charts is that you can buy them in poster-sizes, which is an awesome and very unique gift for the aviation lover in your life or for yourself. Make sure to check out all the different CIGeography charts by going to their online store linked here, and don't blame me for dropping down the rabbit hole and spending hours investigating the equipment and squadron organization of air arms from around the globe.

What interesting takeaways do you have from these charts, let us know in the comments below.

Russia’s land-based missile programs have accelerated greatly in the past few years, and this graphic helps you keep them all straight.