USS Bougainville (LHA-8) will be built with a well-deck unlike her two sister ships, but that’s just one of its unique features. 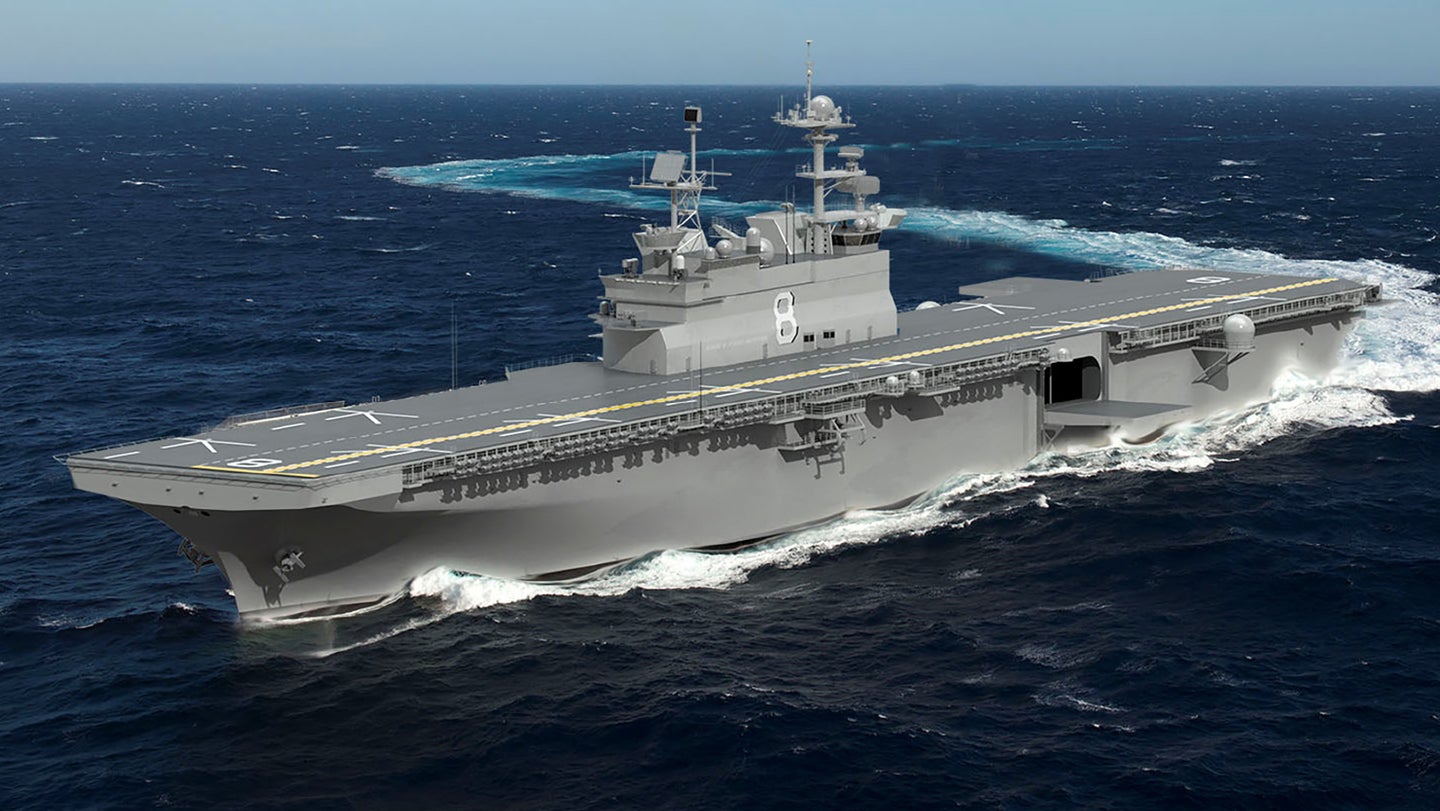 USS Bougainville (LHA-8) may share the America class amphibious assault ship designation but it's really quite a different ship than its two predecessors USS America and USS Tripoli. The biggest change has been widely reported on—the return of a floodable well-deck to 'gator navy' flattop production. The decision to omit this feature in exchange for enhanced aviation capabilities was always a very controversial decision and the USMC and the Navy have decided to bring the feature back. But other major changes will also be realized on LHA-8, including a significant reconfiguration of its deck planform and island design.

In order to make up some of the aviation related-space lost by adding the well-deck back in, and to better facilitate flight operations and aircraft deck handling, LHA-8's island superstructure will shrink a bit into a new, more efficient form. Gone is the large structural extension that emanated forward from the island. This feature offered a garage-like space underneath and worked as a mounting platform for some of the ship's Sea Sparrow, Rolling Airframe Missile, and Phalanx air defense systems.

This structure dates back to the Tarawa class in one form or another, but its deletion, along with an added sponson that extends out from the deck, will allow for expanded parking in front of the island. As for the part of the ship's defensive weapons suite that once sat atop that structure, they are relocated atop the island itself. The reconfiguration allows for at least three additional parking spots for full-sized aircraft, features no 'locked' spots where one aircraft has to be moved to get to another, and it allows for an MV-22 to be serviced without it blocking flight operations.

Other modifications to LHA-8 that aren't externally apparent are changes to roughly 40% of the ship's 2,400 compartments. This includes relocating, adding, or eliminating existing ones. For instance, the entire hospital area has been relocated and the hangar bay's forward area has had its ceiling dropped. The ship will also be the first amphibious flattop to field the Enterprise Air Surveillance Radar (EASR), which is being integrated on the Navy's new supercarriers after USS Gerald R. Ford, giving the ship a massive leap in surveillance capability.

Navyrecognition.com has good comparison metrics that highlight the differences between the last ship in the Wasp class, the first two America class ships, and the revised America class in the form of USS

As you can see, the ship lost about 9,000 square feet of aviation support space due to adding the well-deck back in, but biggest of all is the change in available jet fuel, from 1,330,000 gallons back to 585,000 gallons found on the Wasp class. That's a huge change, but LHA-8 can still fill up an F-35B nearly 300 times with its available jet fuel storage. Vehicle stowage area has taken a hit compared to the Wasp class and the original America class designs, going from 28,645 square feet on the Wasp class LHD-8 to 18,911 on the last two America class ships, down to just 16,011 on LHA-8.

Still, all around LHA-8 seems to be a good compromise between sea and air amphibious assault capabilities and sacrifices more in sustainment of air operations without consistent resupply than it does in moment-to-moment aircraft operations capacity. The America class is being looked on to be able to provide a "Lightning Carrier" capability in which the ship's air wing is made up almost entirely of F-35Bs. LHA-8 and its follow-on ships should still be able to do that and benefit from a well-deck capable of embarking two LCACs at the same, although with more replenishment support than LHA-6 and LHA-7.

This is a great video showing the model of LHA-8 and some of its major changes compared to the USS America and USS Tripoli. Fast forward to roughly 3:18:

USS America has just made its first operational deployment and USS Tripoli was just christened last September. With this in mind, the class still has a lot to prove, especially considering it has been mired in the well-deck and F-35 controversies, the latter of which resulted in multiple reworks orders. But these vessels could factor into the ongoing debate over building cheaper, smaller carriers for Navy fighter aircraft, instead of solely building ultra-expensive nuclear supercarriers.

The Navy has already signed a $3B contract with Huntington Ingalls Industries to design and build USS Bougainville, with the ship slated to begin construction in late 2018. The finished amphibious flattop is then scheduled to be delivered in early 2024.

Operating together with four Italian-built corvettes, the ship will provide a wide range of important capabilities for the Qatari Navy.