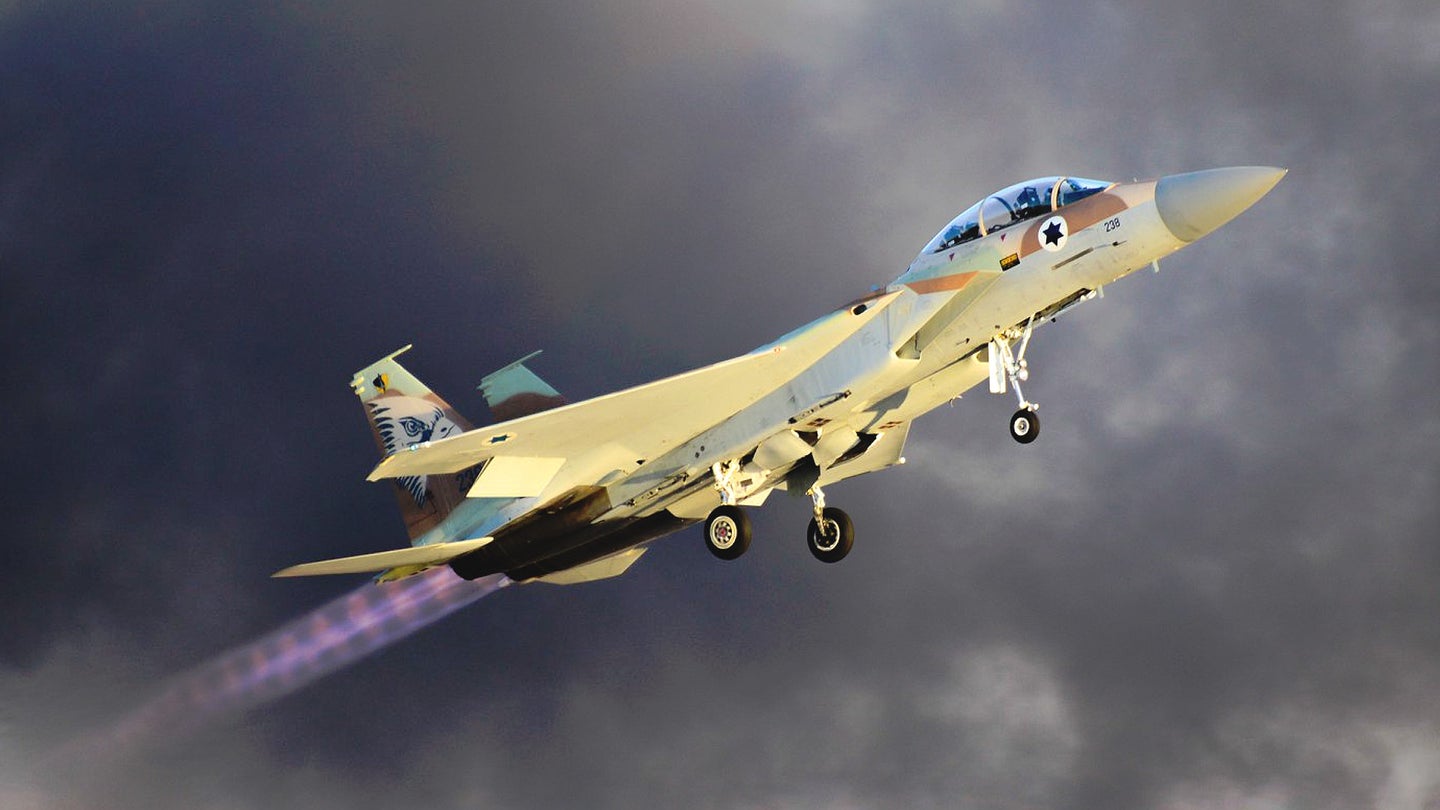 The Syrian government and its partners have issued a string of contradictory reports regarding yet another reported Israeli strike against Iranian interests in the country. Though the exact details of the event remain unclear, Syria’s dictator Bashar Al Assad and his Russian benefactors seem eager to dismiss the incident, in part or in full, while still declaring some sort of victory in the aftermath a massive U.S.-led missile barrage against various chemical weapons sites in the country.

On the night of April 16-17, 2018, Syria’s state media outlet SANA and sources from the Iranian-backed Lebanese militant group Hezbollah reported that there had been missile strikes against Shayrat air base near the city of Homs and another military airfield, Al Dumair, outside the capital Damascus. SANA then declared that Syrian air defenders had shot down a number of missiles, before retracting that story and stating that the entire incident had actually been a false alarm. The latest claim is that this was all the result of a combined U.S.-Israeli electronic or cyber warfare attack.

“We don't comment on such reports,” a spokesperson for the Israel Defense Forces told various Israeli media outlets. As a general rule, it is Israeli government policy not to acknowledge these operations, at least initially. For its part, the Pentagon said that it was in no way involved in any strikes near Damascus or Homs at that time.

That being said, satellite imagery showing Iranian-occupied facilities in Syria subsequently emerged from Israeli media outlets. The message here seemed to be an unambiguous public statement that Israel knows where Iran’s forces in the country are and is more than willing to strike at them if need be.

And though we don’t know whether or not the United States was actually involved, either an Israeli physical or non-kinetic attack would be very plausible. Israel has made it no secret that it sees Iran’s growing influence and physical infrastructure in Syria as an unacceptable threat and has launched a number of strikes against Iranian and Hezbollah-related targets in the country since the civil war began in 2011.

This campaign has notably expanded since January 2017 and shows no signs of slowing down. On April 8, 2017, within 24 hours of the now infamous Syrian government chemical weapons attack in Douma, Israeli warplanes fired missiles at Tiyas Air Base near Homs, also known as T4. Iran said that this operation killed seven members of the quasi-military Islamic Revolutionary Guard Corps' elite Quds Force, which is responsible for advising and assisting for military forces and non-state militant groups abroad.

"Tel Aviv will be punished for its aggressive action," Bahram Ghassemi, the spokesman for Iran's Foreign Ministry, told reporters on April 16, 2017 in regards to the strike on T4. "The  occupying Zionist regime will, sooner or later, receive an appropriate  response to its actions."

Rather than a response to the Douma attack, that strike appeared to be focused on destroying Iran's unmanned aircraft capabilities within Syria. Among the IRGC's dead was reportedly head of their drone operations in the country.

The mission followed directly from an incident in which Iran sent a drone into Israel from Syria in February 2018, which touched off a major series of events, including Syrian air defenders shooting down an Israeli F-16I Sufa multi-role combat aircraft. Earlier in April 2018, Israeli officials announced that the unmanned aircraft was armed and appeared to be on its way to conduct its own strike.

Then, on April 14, 2018, within 24 hours of the American-led missile strikes, Israel reportedly launched another raid into Syria, this time against a Hezbollah garrison near the city of Aleppo. Again, it was not clear if there was any direct connection or coordination between the U.S. military effort and the subsequent Israeli one.

“Early this morning, under American leadership, the United States, France and the United Kingdom demonstrated that their commitment is not limited to proclamations of principle,” Israeli Prime Minister Benjamin Netanyahu said in a written statement after the U.S.-led operation. But he also took the opportunity to tell Assad that “his provision of a forward base for Iran and its proxies endangers Syria.”

So, in that vein, Israel could have decided to simply launch an attack run to further demonstrate its abilities to penetrate into Syrian airspace and attack targets at will. This would have provided a very visible counterpoint to the February shoot down and in light of dubious Russian-supported claims from Syria’s military about having shot down the majority of the missiles in both Israel’s April 8 strike.

“The Syrian response was remarkably ineffective in all domains," U.S. Marine Corps Lieutenant General Kenneth McKenzie, Director of the Joint Staff, said during a press conference on April 14, 2018 in regards to the American, British, and French missile strikes.. He declined to say whether or not the United States or its allies actually employed any electronic or cyber warfare capabilities themselves.

Russia has since similarly said Syrian forces managed to largely brush aside those missiles with their air defense network. That Syria claimed to have shot down a number of missiles in this latest instance before changing its story to say that there were no incoming threats at all can only cast more doubt on these previous narratives.

But an electronic or cyber warfare attack, or some combination thereof, would hardly be out of the realm of reason. In 2007, the IDF reportedly launched a cyber warfare attack using a computer program called Suter to misdirect Syrian air defense radars and clear the way for a strike on the country’s covert nuclear reactor in Deir ez-Zor. Though Israel has finally declassified the existence of that operation, it still has not publicly confirmed whether or not it employed any electronic or cyber warfare capabilities.

At the same time, it is difficult to imagine the Israelis going through all of that effort without it being in support of additional objectives. If it is true that they didn't actually launch a strike, these electronic or cyber disruptions might have been in support of an intelligence or reconnaissance mission or a field test of a new countermeasures system.

Whatever the case, there seems to be some debate among Assad and his Russian and Iranian benefactors about how best to respond to the last Israeli incursion, especially in light of the very public American-led strike. Though Israel’s focus is clearly still on Iran and Hezbollah, when it comes to the situation in Syria, it is inherently difficult for one party to engage another in isolation.

At the same time, successful Israeli raids, whatever they target, only serve to potentially embarrass Russia, which has officially linked its own air defenses in the country with Assad’s and is the primary supplier of surface-to-air missile systems to the Syrian government. It is therefore increasingly difficult for the Kremlin to sit by idly ignoring these strikes, even though its forces and interests are not directly under threat.

This, in turn, raises the specter of increasing tensions between Israel and Russia and the possibility that Russian officials could become increasingly critical of both Israeli and American activities in Syria and craft a narrative of there being a firmer link between their individual campaigns. The Kremlin is staunchly opposed to the U.S. military’s presence in Syria, which it routinely decries as an illegal occupation. Iran and Hezbollah are already increasingly employing this narrative of a shared U.S.-Israeli campaign against Assad.

“The conditions do not point to a total war ... unless Trump and Netanyahu completely lose their minds,” deputy Hezbollah leader Sheikh Naim Qassem said in a print interview published on April 13, 2018, ahead of the American-led strikes in Syria, clearly linking American and Israeli actions together whether this is accurate or not. “By bombing the T-4 army base [on April 8], Israel wanted to create an equation that shows that it controls the rules of conflict, and this is not acceptable to us,” he said in a subsequent television interview on April 16, 2018.

Israel itself may be increasingly dissatisfied with the U.S. government often contradictory Syria policy, which is, at present, officially to stay out of the country’s civil war and not actively attempt to unseat Assad. There are now reports that the United States is, once again, seeking to craft a coalition of foreign powers, including Saudi Arabia, Egypt, and the United Arab Emirates, so it can completely withdraw its own forces.

Unnamed Israeli officials have also cast doubts as to the utility of the recent U.S.-led strikes against Assad's chemical weapons capabilities, according to a report by Israel's Ynet News. "The statement of 'Mission Accomplished' and [the assertion] that Assad's ability to use chemical weapons has been fatally hit has no basis," the outlet quoted one anonymous intelligence official as saying.

The U.S.-led strike may have emboldened Israel to act, but it's also true that they were already doing so shortly beforehand. It does seem that they were more than happy to take advantage of the immediate aftermath of the missile barrage to launch their own operation and have continued to exploit the apparent weakness of Syria's air defense network.

The danger in Syria is always that the myriad different parties and their agendas will become so entangled as to lead, at a certain point uncontrollably, to a larger conflagration inside the country or throughout the region more broadly. It seems clear that Israel has long felt it has had some political leeway to intervene in Syria without the danger of such significant repercussions.

However, Israeli officials also clearly see countering Iran’s expanding posture in the country as an existential issue that they would pursue regardless. With Syria’s geopolitical landscape once again especially fluid, it’s difficult to necessarily see how things might play out, even in the near term.

For the moment, by describing the latest Israeli strike as a non-kinetic affair, Syrian authorities have been able to claim that their military facilities suffered no damage while also criticizing the operation. Whether or not Israel is inclined to let that narrative stand, and if not whether it decides to further escalate its air campaign, remains to be seen.