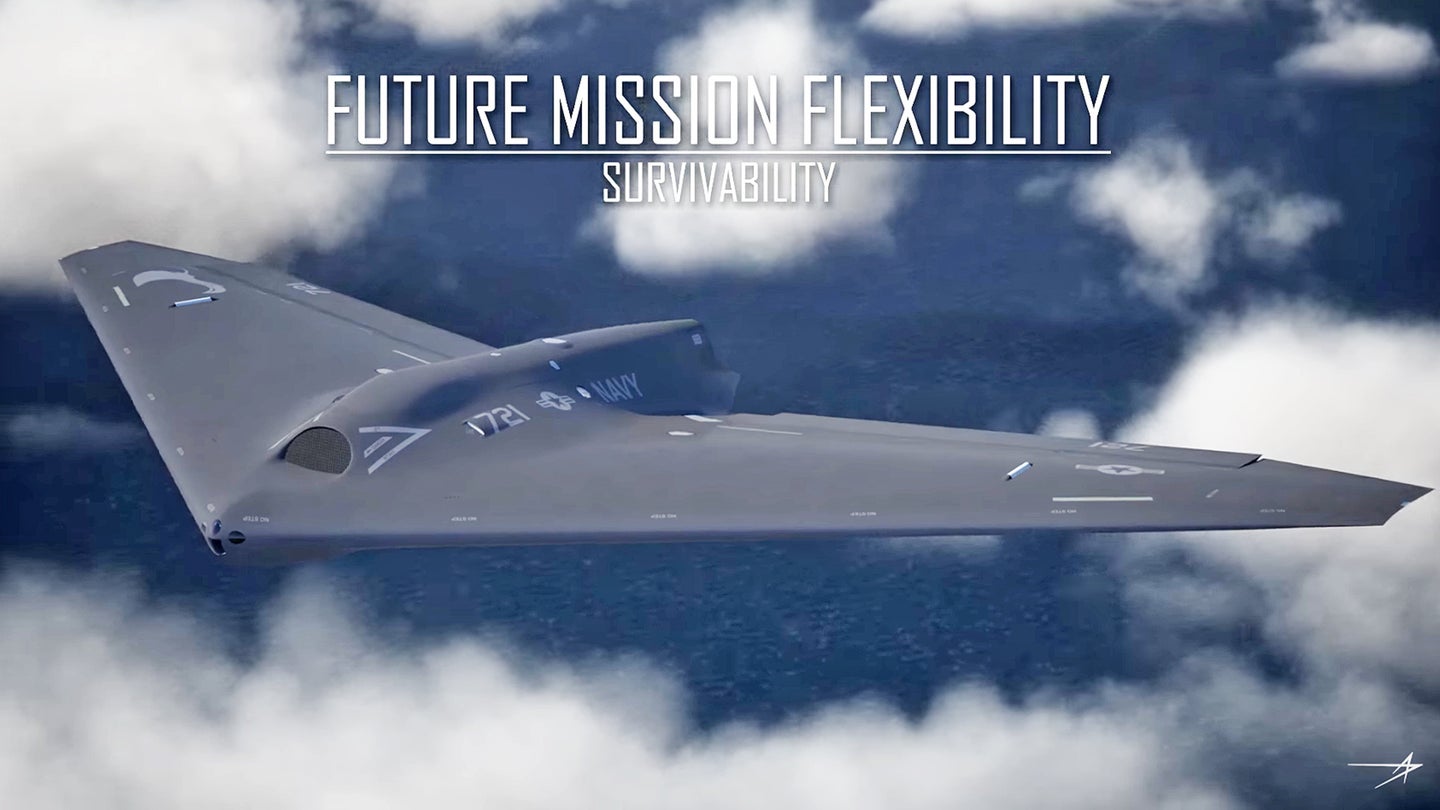 Well that didn't take long! Just weeks after unveiling their entrant into the MQ-25 carrier-based tanker competition, Lockheed is already dangling the possibility of weapons carrying upgrades and a low observable variant of the flying-wing drone.

A very glitzy video produced by the company was released for the Sea Air Space exhibition that just concluded in Maryland. The animation shows the aircraft in action, and towards the end, an MQ-25 is seen loaded with Joint Standoff Weapons (JSOWs) instead of a refueling pod and an external fuel tank. The title above reads: "Future Mission Flexibility-Strike." Then, at the culmination of the video, the MQ-25 morphs in color from light-gray to dark gray, and all the aerials and antennas that are scattered around the drone disappear. Clearly, the Skunk Works is hinting at a future low-observable out-growth variant of its MQ-25 design. And the title above points to that possibility as well, reading: "Future Mission Flexibility-Survivability."

The video also shows off a couple new features found on Lockheed's MQ-25, like how it has a retractable electro-optical sensor turret under its left wing.

It also has some pretty cool air brakes that conform to its conical center section.

Maybe most interesting of all, we get a better idea of how the MQ-25 will move around the deck. It appears that its path will be monitored from the aircraft's desktop-style ground control station via a set of wide-angle video cameras. The aircraft itself will communicate its intent to those on the deck via a set of LED lights on its nose and nosegear doors that display different colored symbols based on what it's doing, or possibly, what it wants to do. Pretty cool really!

The MQ-25 is supposed to be semi-autonomous, so there is no man-in-the-loop flying the aircraft in a traditional sense. It's not clear if hand motion recognition software will be used to direct the bat-winged drone into position on the carrier or if its controller will direct it using a point-and-click interface or some other command concept.

You can watch the video in full here:

The possibility of a low-observable derivative of Lockheed's Stingray isn't surprising based on the aircraft's basic design, the company's past flying-wing endeavors, and the Skunk Works' long history with stealth, but it runs counter to Lockheed's recent claims.

Aviation Week's James Drew was given the opportunity to unveil the exotic drone tanker's design to the world in a large feature that we wrote an extensive blog about. In it, Drew interviews Lockheed's MQ-25 program manager John Vinson, in which he states:

“There’s no credit given for stealth. We’ve gone with the flying-wing design for efficient operation,” Vinson explains. “Most tankers carry fuel in the wing to distribute the weight of the fuel with the lift of the wing, and since that is what the majority of the payload is, we’re doing an all-wing design.”

If the jet can become a low observable asset by adding coatings, concealing antennas, and making other small tweaks, then it seems the Skunk Works team did, in fact, have stealth in mind when designing their MQ-25. Boeing's MQ-25 prototype came straight from the now-defunct Unmanned Carrier Launched Airborne Surveillance and Strike (UCLASS) program that had low-observability requirements and could also be returned to its harder to detect configuration in the future with similar modifications.

Keep in mind we are not talking about very low observable, deep penetrating stealth aircraft here, but ones with enhanced survivability that can operate along the fringes of contested airspace and even directly inside threat environments that don't feature advanced and dense integrated air defense systems.

General Atomics design, on the other hand, is unlikely to be able to be reconfigured into a low-observable platform. But at the same time, it may be able to carry more fuel than any other competitor—at least if the powerful engine it uses is any indication of its intended payload.

This brings us back once again to the reality that all three competitors directly emanate from or are at least based in part on their now defunct UCLASS progenitors. Even Lockheed's 'clean-sheet design' that supposedly gives no quarter to low-observability clearly has a strong relation in planform and configuration with their very stealthy Sea Ghost UCLASS design. And Sea Ghost was based directly on the very low observable RQ-170 Sentinel.

The MQ-25 requirements have no mention of stealth, and that is at least partially the reason why Northrop Grumman, and its highly promising and proven X-47B demonstrators, dropped out of the competition. In retrospect, the Navy should have just prioritized the tanking requirement higher in the UCLASS competition. Then it would have ended up with a more competitive bidding process and a penetrating low-observable combat air vehicle that could also lug some gas around when needed. If it couldn't meet the 14,000lbs of transferable fuel after flying 500 miles from the carrier requirement, just sortie an extra one to accomplish the task.

In other words, by continuing with UCLASS but beefing up its tanking requirements a bit—tanker capability was part of that program as well—the Navy would have had a little less tanking capability per airframe, but they would also have ended up with an aircraft that could do so many other missions, some of which are very in demand and go completely unfulfilled within the Navy as a whole. Also, considering the Navy is now buying large lots of Super Hornets again—and with conformal fuel tanks—the need to offset the tanking mission from the Super Hornet community has decreased massively.

Then again, if the Navy just bought the best navalized unmanned combat air vehicle (UCAV) available from any of the four manufacturers that were bidding on UCLASS, the service would have carrier-based tactical aircraft that could shatter the range of any manned asset by a multiple of two or three, and without any tanker support at all. So an MQ-25 tanker really wouldn't even be necessary. But if the Navy still wanted an unmanned tanker, it could convert some of the 108 S-3 Vikings it already owns that are just sitting out in the desert into one.

Then again, if a stealthy carrier-based UCAV wasn't 'strangled in its crib' by the fighter-pilot dominated decision-making cadre in the Navy and the idiots in Congress, it would lead a lot of people to ask why an F-35C is needed if a drone that cost half to a quarter the price can do many of the same things but three times to four times farther away and without risking a pilot in the process.

But instead of just embracing the future and fielding the best UCAV it could, the Navy is blowing its money on a tanker drone that it no longer needs that badly and that can maybe adapt to do some limited work in the semi-contested airspace. That is if the Navy will shell out to develop and field those upgraded variants.

In the end, the decision deep six UCLASS and neuter the Navy's unmanned carrier-based aircraft potential into the form of a flying gas can was laughably near-sighted and arguably disingenuous. Above all else, the decision to give the drone a job no fighter pilot wanted, one that was only needed in part because of the cancellation of UCLASS itself, protected the service's manned fighter programs with ruthless abandon.

And sadly, none of this is surprising.