If The U.S. Attacks Syria Here's How Russia Could Retaliate Militarily

There is a real chance that Russia could follow through with its threats of retaliation, here's how we think it would most likely do it. 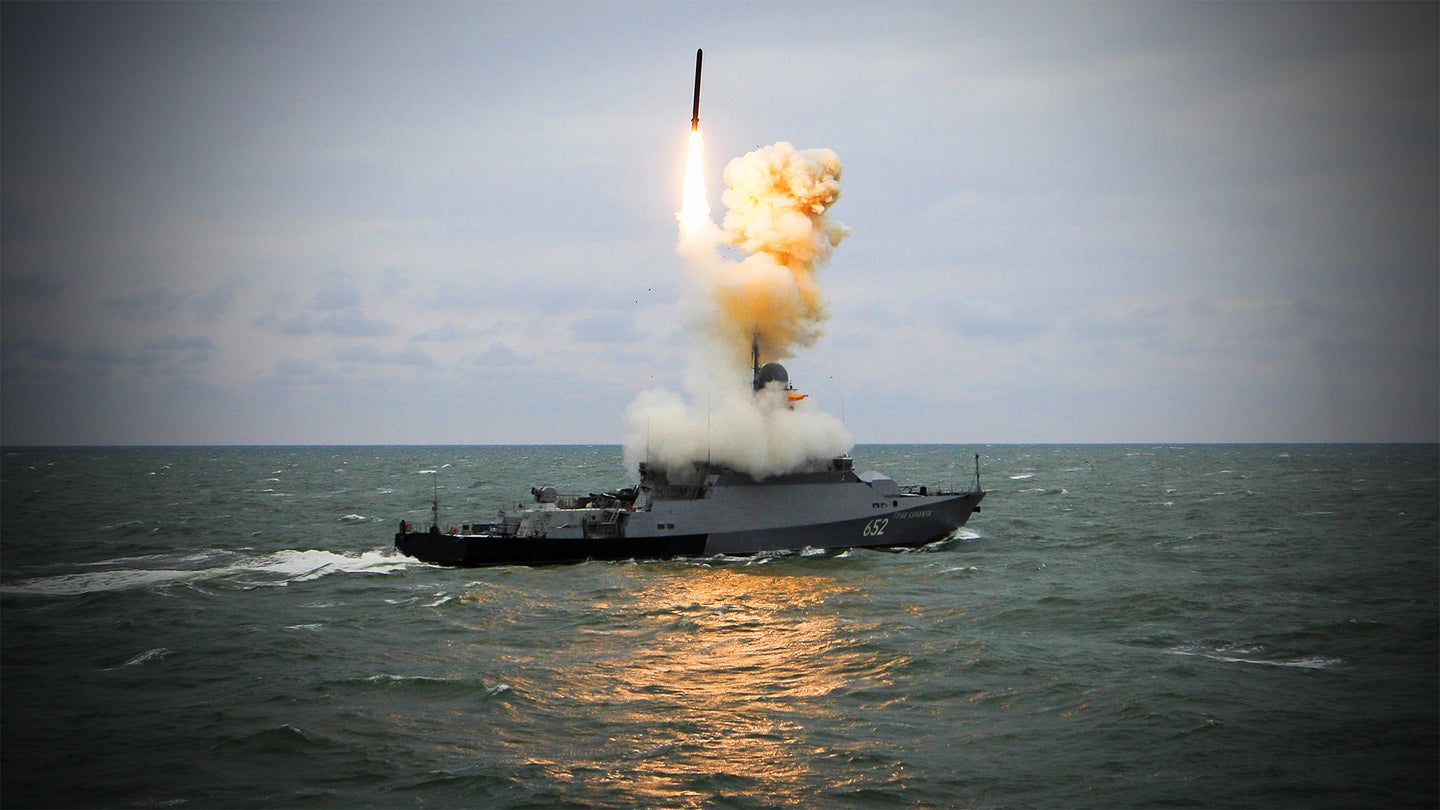 Just days after the gas attack on Douma, and as the U.S.-Russia relationship careens into the most tumultuous diplomatic period since the end of the Cold War, the internet is buzzing with all sorts of military-related claims. These include rumors of assets being discreetly moved towards Syria, aircraft carrying out specialized patrols over and near the country, and other more outlandish claims many of which have laughably bad sourcing if any at all. Still, it seems very likely that we are on the precipice of a U.S.-led military action against the Assad regime in Syria, and Russia has sworn time and again that they would respond in kind to such an act. But what would that look like? How could Russia act tough while still not near-instantly inciting World War III? What we think is the answer to that question is probably not what you have been hearing.

This article is not about gaming out Russia's decision cycle after a substantial U.S. attack occurs. There is a good chance Russia could do nothing at all militarily. Instead, it could choose to do something totally asymmetric like a cyber attack or some large-scale show of force. It could even do nothing at all. But for the purpose of this exercise, we are assuming Russia will act swiftly in a military manner, so let's put the debate as to why aside.

Currently, talk of a Russian reprisal has almost totally stayed within the naval realm. It seems to be all but assumed that the U.S. will launch another Tomahawk cruise missile barrage from the Eastern Mediterranean at targets in Syria. This is likely accurate, but this time around a more diverse set of assets are likely to be used in addition to Tomahawks, such as B-2 bombers, F-22 Raptors and other standoff munitions. Regardless of what is used, the train of thought is that Russia will return fire on the launching vessel or vessels by executing an anti-ship missile attack. There have even postings of Flanker derivatives supposedly prowling over Tartus, Syria carrying Kh-35 anti-ship missiles to support this idea. Of course, there is no way to corroborate the authenticity of these images.

But would Russia really try and sink an American warship with hundreds of sailors on board in response to an attack on a relatively weak allied foreign power that is being accused of launching a gas attack on its own people? Very unlikely. Doing so would also instantly open up the naval domain as a battleground, which is not an attractive reality for the Russian Navy. The overall repercussions of such a move would be far too severe, and in the end Russia just cares that Assad stays in power. As long as he survives it is simply a matter of showing that Moscow's threats are tangible, not avenging the gallant spirit of the Assad regime.

Instead, Russia is more likely to contain the conflict within Syrian borders by launching a series of highly targeted standoff attacks on American interests and installations in Eastern Syria. Namely, those that support non-Kurdish militias that are also vehemently anti-Assad, such as the Syrian Arab Coalition. The staging and training base near the town of At Tanf, located near the nexus of the Jordanian, Iraqi, and Syrian borders, would be an especially attractive target.

The base has already been attacked by Russia in the past in a mysterious multi-wave aerial assault that occurred in June of 2016. Iranian-backed Assad loyalist fighters attempted attacks on the base on no less than two occasions a year later. Two advanced Iranian drones were also shot down near the base by F-15E fighters during those offensives. So the base has already been openly contested by forces loyal to Assad.

Similar operating locations are also scattered as far north as al Raqqa and as far east as Deir ez-Zor. Once again, going after these targets would allow the Russians to target American interests in the country without killing U.S.-backed Kurdish fighters, which Russia also has an ongoing relationship with. Yet even that relationship has made a major turn for the worse in recent months.

As for the possibility that Americans could die in those strikes, Russia can say the same for American strikes on Assad's military capabilities and installations. Giving the U.S. a warning may be possible on very short notice but it could decrease the chances of their cruise missiles actually making it to their targets intact. But even if U.S. special operations personnel vacate those locales in advance of a Russian attack, destroying the infrastructure at the forward outposts, albeit already quite austere, can be claimed as a win by Moscow.

Russia already has a significant number of options for which it could execute a stand-off attack already positioned in the region. Sending aircraft to do the job would result in major losses of Russian tactical aircraft at the hands of American fighters, including F-22 Raptors, which persistently prowl the airspace. Within Syria proper, it has Bastion-P coastal defense systems, each of which includes a number of wheeled transport-erector-launchers with two P-800 Oniks missiles.

Officially a supersonic, sea-skimming anti-ship missile, in November 2016, Russian forces in Syria demonstrated that the weapon had a secondary land-attack capability. It remains unclear how accurate these weapons are in this role given that they traditionally use radar to home in on their target in the final stages of flight and that system is geared toward searching for and locking onto ships in a maritime environment. At the same time, the missiles could rely on their inertial navigation systems with the help of GLONASS to strike a set of coordinates on a map.

More likely, the Kremlin would turn to sea- and air-launched cruise missiles. Right now, the Russian Navy's Admiral Grigorovich-class frigate Admiral Essen, which can carry up to eight Kalibr land-attack cruise missiles, is in the Eastern Mediterranean Sea within striking distance of Syria. Another Admiral Grigorovich-class ship is nearby in the Red Sea and could readily move into position.

Russia has a number of submarines that can fire Kalibr missiles, as well, and may be operating in the Mediterranean. In late 2017, two Improved Kilo-class boats entered the area, both of which carry those cruise missiles, and the Black Sea Feet's Kilo-class boats are now a fixture in the area.

By striking from the Mediterranean, the Russians would be able to avoid having to secure permission to send those missiles flying over third-party countries. Otherwise, they would have to do so without that authorization and risk the consequences of possibly provoking diplomatic protests, or worse if one of the weapons fails and crashes inside one of those countries.

In 2015, ships from the Russian Navy's Caspian Sea Flotilla fired Kalibrs into Syria, but some of them came down inside Iran. Warships firing those weapons from inside the Black Sea would have to shoot the weapons over Turkey, while launches from the Red Sea would have to cross Saudi Arabia, and possibly Jordan, the latter being an especially staunch American ally, to get to Syria.

Another option would be to send long-range bombers, potentially including Tu-22M3 Backfires, Tu-160M White Swans, and Tu-95M Bears, carrying Kh-55 and Kh-101 air-launched cruise missiles over the Mediterranean to launch those weapons. The Kremlin has already used these aircraft, flying from bases within Russia, in the past for stand-off attacks on targets in Syria. But in this case, countries may balk at providing overflight rights to those bombers considering they may be on their way to strike American targets. Also, using bombers would give the U.S. a big heads up as to what is likely to come—but then again that could be Moscow's intent.

There is even the possibility that the Russians could take the opportunity to demonstrate an all-new capability. Russia's Air Force claims that it has fielded the Kh-47M2 Kinzhal, which appears to be an air-launched version of the Iskander-M short-range ballistic missile, with MiG-31 interceptor units in the country's Southern Military District.

These aircraft, which are intended for long-range operations, would almost certainly be able to strike targets in Syria from those bases with the Kinzhal. It's not clear, however, whether the Kremlin would be willing to commit a weapon to combat for the first time in this instance and we don't know if the system has a conventional warhead option.

The Russians have been using the Syrian battlefield as a proving ground for their newest weapons for years, but they have employed them only against anti-regime rebels and ISIS where the stakes are lower. They would likely favor more proven systems in any attack that could lead to the deaths of American troops, whether the goal is to avoid those casualties or cause them.

The Kremlin could also decide to avoid directly striking back itself, offering tacit support to the Syrian government or Iran and its proxies to go ahead with their own stand-off attacks. Iran has already demonstrated its ability to fire ballistic missiles from its own territory at targets within Syria and has been actively helping Assad with his own ballistic missile program. The Syrian military has used its own short-range Scud-type ballistic missiles in the Civil War, but it's unclear how many it has left after nearly a decade of fighting or what condition the remaining examples might be in at this point. Those missiles are also vulnerable to preemptive strike as they fuel in an erect position, and Assad mobilizing those missiles would be just the type of operation the U.S. would undoubtedly be looking for through its intelligence channels following a punitive set of strikes.

For Iran, though, the calculus could be more complicated as it is seeking to gain a greater foothold in Syria while at the same time weathering increasing Israeli strikes, including a recent attack on Syria's T4 air base earlier just two days ago. The threshold for American and Israeli escalation against Iranian targets inside and out of the country would be far lower than it would be in response to a Russian attack and would put Iran at greater risk as a result.

The same is even truer when it comes to the Syrian government, which exists in no small part at the whim of Russian support and still comes under regular Israeli attack. All of this together means that the Russians remain the best positioned and capable of retaliating against any American-led action with strikes in kind within Syria.

Keep in mind that this is just our best guess as to how such a reactionary operation would take place. Once again, Russia could do nothing at all or something within a completely different domain of warfare. But considering Moscow's persistent statements that a U.S. attack on Assad or his forces would result in a similar counterattack by Russian forces, the scenario we laid out above seems the most likely.

Of course, the fact that we are even writing this post is downright terrifying, and the biggest question is what comes after such a tit-for-tat exchange occurs? Simply put, the two Cold War-era foes have not come this close to exchanging blows in decades, and somehow it all seems so nonchalant.

And that is the most troubling part of all.