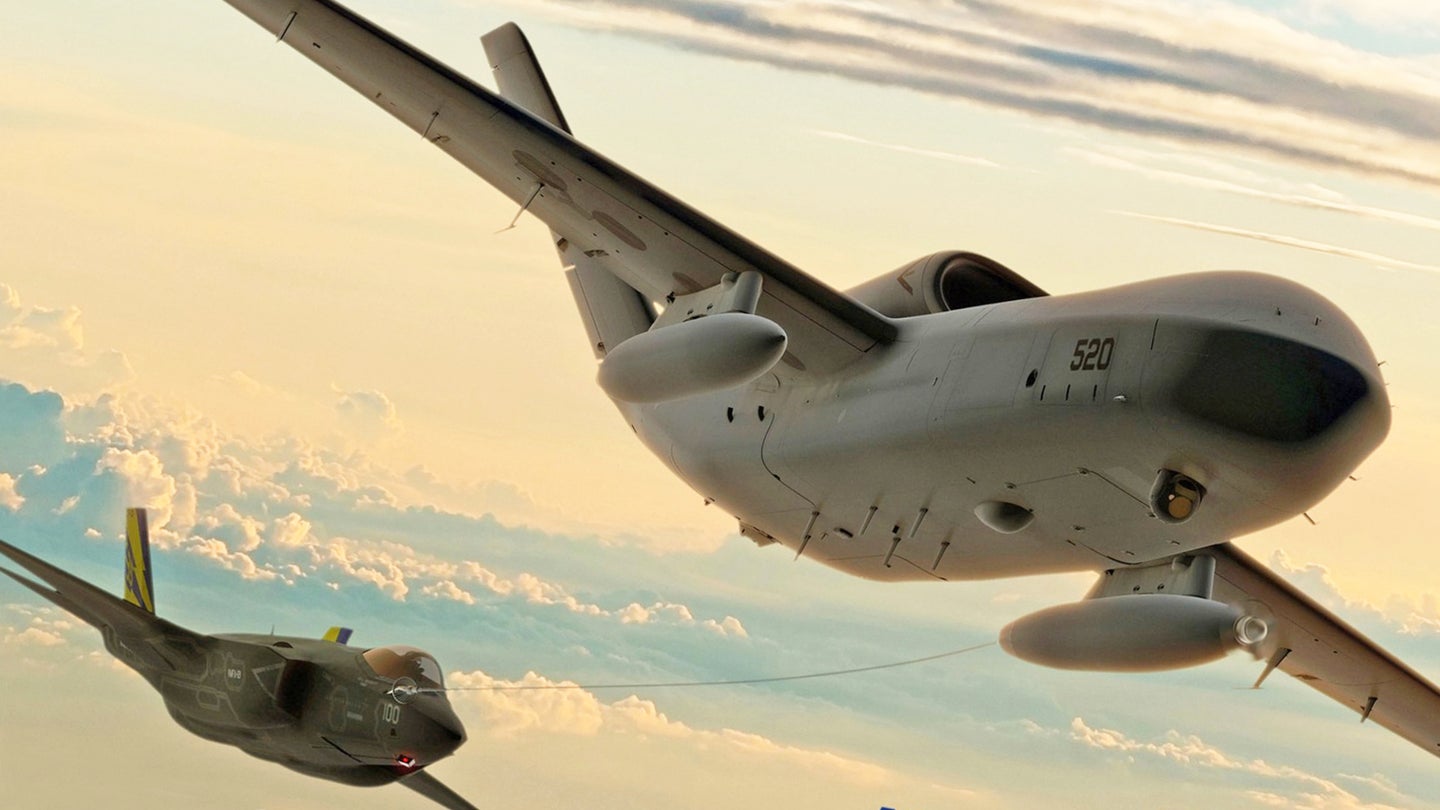 General Atomics, purveyor of the iconic Predator and Reaper drones, has officially released more concept art and new details about its carrier-based tanker drone to our friend and Aviation Week reporter James Drew. One main revelation in Drew's report is that the company doesn't plan on actually building a full-scale prototype of its design, at least not until they win the competition.

Instead General Atomoics will use its existing Predator-C/Avenger, on which their MQ-25 concept is based, for limited ground handling tests. This will include testing gesture recognition software that will allow the unmanned craft to taxi around the carrier's deck without a person controlling it in the traditional sense. They will also build a full-scale engine test stand that will include a model of the aircraft's inlet design, all part of an initiative to prove to the Navy that their MQ-25 is a low risk choice.

It doesn't look much like its animal namesake, but General Atomics' MQ-25 'Stingray' does appear exactly like what we have seen in past renderings. It also adheres to what General Atomic's told The War Zone directly last February, that their engineers used dynamic modeling software to dramatically alter the 'Sea Avenger' concept into the MQ-25 Stingray we see today, an aircraft that is tailored to the Navy's tanker requirements.

Sea Avenger was designed out of the Avenger for the now defunct Unmanned Carrier Launched Surveillance And Strike (UCLASS) program that predated the dumbed down tanker requirement we now know as the MQ-25 'Stingray' Carrier-Based Aerial Refueling System (CBARS).

So basically what we have here is a ballooned Sea Avenger of sorts with a new, more traditional wing. And it is a very promising looking concept as it appears virtually every aspect of its design has been modified to add internal fuel volume. This makes plenty of sense considering the MQ-25 has to pass at least 14,000lbs of fuel—roughly the equivalent of an F/A-18E's internal fuel capacity—to receiver aircraft operating some 500 miles from the carrier and still have enough gas to return to recover in this ship safely.

General Atomics had high hopes for the Avenger concept that balanced stealth and performance against affordability, but has yet to receive a major order for the type:

The renderings also show the aircraft fitted with two hardpoints, one for the Cobham refueling pod and the other with an external tank. Various antennas protrude from the airframe as well, and an electro-optical sensor ball is seen protruding from under the forward fuselage. This is a feature that is planned on all three MQ-25 entrants, providing an austere surveillance capability. Additional space for a surface-search radar or a radar pod is also likely to be common about feature on all of the competitors designs.

According to what General Atomics told The War Zone, their design may even feature more gas carrying capability than what is required as it was stressed to us by program manager Chuck Wright that substantial 'margin' was built into their MQ-25 design. This is also reflected in James Drew's report, in which he writes:

"In an exclusive interview with Aviation Week in mid-March, GA-ASI President David Alexander expressed confidence that the company’s proposal for MQ-25 will exceed the Navy’s performance requirement for fuel offload and range, as well as the objective delivery schedule."

The company's push to optimize their MQ-25 entrant for the tanker mission also includes a far more powerful engine than the current Avenger flies with. In early February, the company announced that it had selected the Pratt and Whitney PW815 turbofan to propel its MQ-25. The company says the engine was chosen due to a special focus on reliability and supportability, stating in a release that "the PW815 was intentionally designed with availability in mind. It is designed to be the easiest engine in its thrust class to access and maintain."

The PW815 will be configured to produce 16,000lbs of thrust for General Atomics' MQ-25, four times that of the Avenger's existing PW545B powerplant, according to the Aviation Week article.

Compared to Lockheed's more exotic flying wing MQ-25 design, and Boeing's similar but more streamlined and still somewhat stealthy design (a byproduct of its UCLASS roots), General Atomics' entrant appears to be a big flying gas truck that seems to attempt to meet the Navy's requirements in the most straightforward way possible.

Even though the company won't produce a flyable prototype—a risk-reduction decision Lockheed has made as well—their MQ-25 is once again based on the Avenger drone which has been flying now for nearly a decade. It even spent time in Afghanistan, although its operations there remain shrouded in secrecy. As a result, each competitor has a different situation when it comes to having a physical representation of their design or not.

Boeing remodeled an existing prototype that was built for the UCLASS program in 2014, before it was watered down into a tanker requirement. Still, it is a physical specimen that is supposedly capable of flight. There is also talk that Boeing's Phantom Works may be working on a second prototype that will be more representative of their final design iteration.

Lockheed's Skunk Works on the other hand shows no indication that they are planning on building anything physical at all when it comes to their flying-wing MQ-25 entrant. Instead the company's pedigree with unmanned flying-wings, which dates back more than two decades, could help bolster the case for their 'paper' but still impressive MQ-25 design.

General Atomics' MQ-25 situation is a hybrid of the two—they have a flying and proven version of the aircraft that their MQ-25 is based off of. But that aircraft is two iterations removed from the much heavier and beefier MQ-25 derivative and is in no way hardened for the harsh carrier operating environment. Beyond that, the company is only going to build an engine test mockup that will include the design's overhead air inlet. This will help eliminate risk for a number of critical aircraft components, but it's a far cry from producing an actual aircraft prototype.

It's worth noting that the MQ-25 tender does not require competitors to put forward a flying prototype, but the Navy is not prone to taking very high developmental risks with its tactical aircraft fleet. The more risk reduction work a contender has done the better they are likely to be off. This is especially true considering the longevity of the MQ-25 program may be somewhat in doubt and major cost and timetable overruns that occur after the contract is awarded could sink the program fully.

The fact that General Atomics isn't going to rollout an actual prototype is somewhat surprising to me, as during my interview with the company's project manager I got the impression that this was indeed the plan. Maybe things changed or maybe the engine test stand was deemed enough of a prototype going forward.

The firm has built hundreds of Predator, Reaper, and Gray Eagle drones, as well as other derivatives of those designs, over the last couple decades. The same cannot be said for Boeing. And even though Lockheed has been very active clandestinely in the tactical unmanned aircraft space, and at least one of their unmanned platforms, the RQ-170 Sentinel, did enter into limited production, it doesn't compare to the scale of output that General Atomics has realized.

The Avenger is thought to cost around $15M per aircraft. The super-sized MQ-25, which will be a more complex, heavier, and hardier aircraft will certainly cost much more. Yet the fact that the company can deliver an aircraft like Avenger at that price is a good sign. We have no idea what an RQ-170 or any other flying-wing drones Lockheed has secretly developed have cost. Boeing's MQ-25 design is a total question mark in the cost department as well.

The renderings we have seen from both General Atomics and from Lockheed may put into question Boeing's prototype's ability to carry enough gas to meet the Navy's requirements. Since it was designed originally to meet the UCLASS requirements, it's possible that it doesn't meet the MQ-25 requirements fully. If that is the case it should be viewed as a technology demonstrator more than an actual prototype.

This could be why Boeing is potentially moving ahead with building another prototype that better reflects their final MQ-25 configuration. Even the aircraft's buried inlet—a fairly exotic and potentially troublesome low-observable feature—is worthless when it comes to meeting the MQ-25's fairly basic survivability requirements.

General Atomics is the little guy in the MQ-25 fight—everything is relative in the world of big defense right? They are going up against the two largest aerospace defense contractors in the United States, which may be intimidating but it could actually be a blessing, at least according to David Alexander, General Atomics Aeronautical Systems' President, who told James Drew the following:

“We are the rapid-capability company when you look at this competition, and being privately held is a big piece of that... Those big corporations can have deep pockets when they want to, but they don’t typically move quick, like we do. Our agility, to move quick and be focused, gives us a competitive edge.”

Now that all three competitors' cards are largely on the table, we will probably get better defined metrics for each proposal in the not so distant future, as well as individual claims of superiority over the competition. But clearly General Atomics has put forward a no-nonsense flying fuel truck that includes some serious risk reduction work, not to mention benefiting from years of flight experience from its inspiration, the Avenger.

Four years ago I wrote the following when detailing Avenger's merits and predicted that the Navy may find its straight forward and less risky design as attractive for the then still active UCLASS bid which was already being degraded by Navy officials:

Originally it was expected to require a deep penetrating, high subsonic, bat-winged, state of the art design, but now it seems more like its requirements were written based on the Avenger's sales brochure, with a greater focus on cost, surveillance, endurance, rudimentary capabilities like acting as an aerial tanker, and reliability than deep interdiction against an enemy with an advanced air defense network. Thus General Atomics' "Sea Avenger," an outgrowth design of the baseline Avenger airframe, which was the dark horse in the contest originally, may be poised to take the prize."

Now that the Navy's carrier-based drone program has been reduced to satisfy almost entirely the tanker mission, those words continue to ring eerily true.