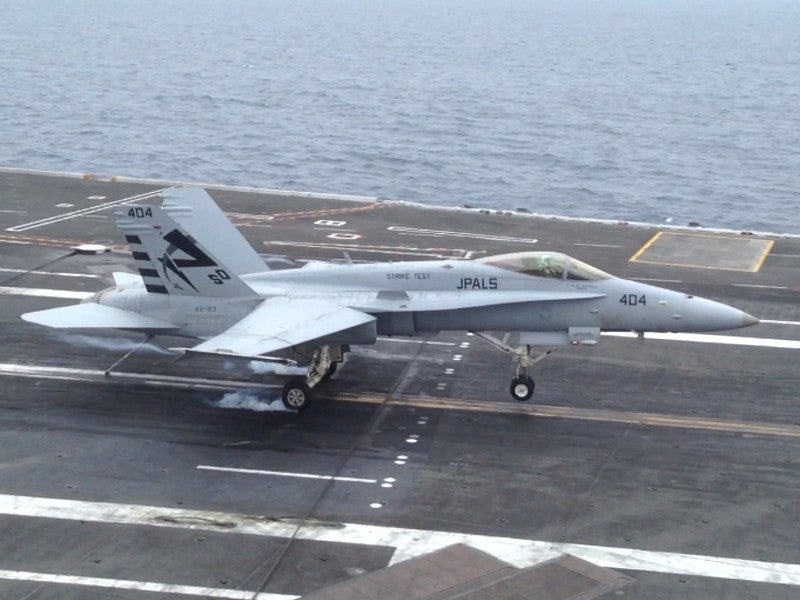 The flight deck crew of a U.S. Navy aircraft carrier has remotely controlled an F/A-18 Hornet through a series of touch-and-gos at sea for the first time using a specialized system known as the Aircraft Terminal Approach Remote Inceptor, or ATARI. The service may eventually give all of its flattops this same capability, which would be invaluable in the event of an in-flight emergency or poor weather and could also serve as an alternate means of recovering unmanned aircraft in the future.

In March 2018, the Landing Signal Officers on board the USS Abraham Lincoln used ATARI to maneuver a Hornet with a pilot inside from the “Salty Dogs” of Air Test and Evaluation Squadron Two Three (VX-23) through a standard recovery procedure. Naval Air Systems Command (NAVAIR) first began testing the system on land in 2016 using a modified Learjet, before installing the necessary equipment in some of VX-23's F/A-18s the following year.

“The [sea state] conditions were really varsity [difficult], and it was really impressive the system worked the way it did. On a calm day, it would have been a little bit boring, but this was definitely more challenging,” U.S. Navy Lieutenant John Marino, a VX-23 pilot who flight tests systems for carrier suitability, said after the March 2018 event. “Back on the airfield, testing was benign.”

Landing on board an aircraft carrier is demanding at the best of times and is a skill set that requires pilots train and re-qualify regularly to reduce the possibility of potentially deadly accidents. When the ship’s deck it pitching up and down several feet and rolling from side to side, possibly at night, it only requires more attention to detail.

True to its acronym, the components of ATARI on the carrier consist of a joystick and other controls and monitors to observe the aircraft’s flight path. It’s not clear from the Navy’s description whether the system uses a line-of-sight link or leverages the longer range data links on the aircraft itself. We also don’t know whether or not it takes a video feed from cameras on the plane itself or uses sensors on the ship to determine the appropriate glidescope and lineup position, or both.

Whatever the case, the aircraft is fully under the command of the Landing Signal Officer during the process. “You're effectively using little joystick controllers to guide a 40,000 pound airplane, and it's almost like you're playing a video game,” Buddy Denham, the NAVAIR engineer responsible for creating ATARI told the service’s reporters after the test flights.

The Navy says that the system is not supposed to be a replacement for pilots landing manually, but rather as an emergency backup. During the test the deck crew waved off the pilot three times to ensure the conditions were safe enough for the Landing Signal Officer to take over.

But given the inherently complicated nature of recovering aboard an aircraft carrier, having the system in place could be especially useful in a number of situations. Perhaps the most obvious scenario is a battle damaged single-seat fighter jet returning the carrier from a combat mission with a wounded pilot who may not be physically capable or even fully conscious enough to put the plane down on the deck. Ditching or ejecting into the water may not be an option either in that case, since the aviator might not be capable of employing their survival gear before rescue personnel can get to them. Being able to put the aircraft on the deck would be both safer and speed up the process of getting the individual potentially life-saving medical attention.

Unfortunately, there are an increasing number of non-combat situations where a carrier might benefit from having ATARI on board. The Navy’s Hornet and Super Hornet fleets in particular, as well as the related EA-18G Growler community, have been experiencing high incidences of hypoxia-like symptoms for years and the service continues to struggle to find the root cause or causes.

Hypoxia is a significant drop, or halt altogether, of oxygen reaching the brain, which can lead to headaches, confusion and disorientation, blackouts, and even death. A pilot suffering for any of this while operating from an airfield shore is bad enough, but would be made even more dangerous when combined with trying to land on board a moving aircraft carrier at sea.

On top of that, these same types of aircraft have experienced a number of freak and potentially deadly accidents relating to their environmental control systems. In January 2018, the two-man crew of an EA-18G had to use their smart watches and the verbal guidance of personnel on the ground in order to make it back to Naval Air Station Whidbey Island in Washington state after the cockpit temperature plunged to -30 degrees Fahrenheit, icing over their instruments and the insides of the canopy.

ATARI would give the ship’s crew another way to intervene in these sorts of emergencies. The system could also be a boon on land, too, for the same reasons.

It might also just help in instances of pilot fatigue. Along with ATARI, NAVAIR has been testing another system called Magic Carpet that helps reduce the workload on pilots landing on an aircraft carrier by suggesting appropriate course changes.

This also helps reduce the instances of having to send out a recovery tanker – an F/A-18E/F Super Hornet with a buddy refueling store – to give the aircraft extra gas in order to make additional landing attempts. Having to wave off and circle around again can be grueling and giving an aircraft carrier’s crew the option of stepping in and getting the aircraft down could be important in extreme cases.

However, ACLS, which relies on a dedicated radar on the carrier to provide course correction information, reportedly lacks the precision necessary to work by itself in all cases. In approximately 20 to 40 percent of ACLS-assisted recoveries, the pilot still needs to take over and make the final adjustments before landing.

As such the service hopes to begin replacing both ICLS and ACLS with improved and more accurate Joint Precision Approach & Landing Systems (JPALS), which uses GPS-enabled position information, starting in 2019. ATARI could still provide an important backup system for JPALS in the scenarios we've already noted.

With the Navy planning to add MQ-25 Stingray tanker drones to its carrier air wings in the coming years, ATARI could take on an important role as part of the ship’s unmanned carrier aviation control architecture. From what we know now, each flattop will get a dedicated control suite and the pilotless aircraft themselves will be capable of semi-autonomous flight, including take-offs and landings.

Without a pilot on board, if the ship loses control or the drone’s own flight computer malfunctions, ATARI would be another possible alternative means of regaining control and getting the unmanned aircraft back home in one piece. In that way, the system reflects the service’s need to adjust how it expects to operate if it wants to incorporate the MQ-25 or any other carrier-launched pilotless planes fully into the carrier air wing.

"We don't have unmanned carrier-based vehicles in the fleet today, but they are coming soon,” Dan Shafer, a NAVAIR air vehicle engineer, said after the tests on Lincoln. “This is a potential alternative landing method and our [ATARI] system performed well.”

Of course, ATARI won’t likely be a perfect remedy in any of these situations. In a real emergency, the Landing Signal Officers might not have the benefit of multiple passes before they can be confident in their ability to set the aircraft in question down safely or at least have it take the barrier. They might still call for a stricken pilot to ditch or eject for fear of causing a greater catastrophe on the flight deck.

Depending on its configuration, failures in the command links between the system and the plane heading back to the carrier are a potential issue that could similarly render ATARI non-functional. In a crisis, satellite linkages are increasingly vulnerable to hostile interference, as well as enemy forces outright attacking space-based assets.

But if ATARI doesn't rely on satellite links, it could be especially useful in a GPS-denied environment and might be the only option for getting drones that rely on satellite navigation back on the ship. It could also be an important substitute for the GPS-dependent JPALS, as well.

VX-23 conducted the flight tests in March 2018 amid routine carrier qualifications on the ship and the data NAVAIR collected will go toward refining the system. At present, the Navy does not intend to install the ATARI control components on any other aircraft carriers beyond Lincoln.

Still, more options are inherently better than not. With this successful experiment in hand, the Navy could one step closer to giving all of its aircraft carriers the ability to land returning aircraft by remote control.